I make it to Phantom Ranch’s Canteen in plenty of time to down a couple of beers before they close at 4:00pm to prepare for the evening meals. But first, Kate, the bartender/hostess/receptionist/wait staff tells me to go to the dorm first to secure my spot.  “Pick any available bed that has a towel folded on it.”  It’s late in the afternoon, so I am thinking I’ll be lucky if I can secure a lower bunk.  I am surprised to enter the dorm room and find all 10 beds still up for grabs.  I take the one at the far end of the room in a small alcove.   It has a lot more privacy and is closest to the bathroom.

I am also pleasantly surprised to lay down on my bunk to find the mattress is nice and comfy.   The dorm rooms are each equipped with a toilet and hot shower with “body shampoo.”  At $50 a night, one might think they should offer a few more luxuries, but when you consider that everything from the clean sheets to the staff who make the beds must come down over seven miles by mule or by foot, the price seems more reasonable. 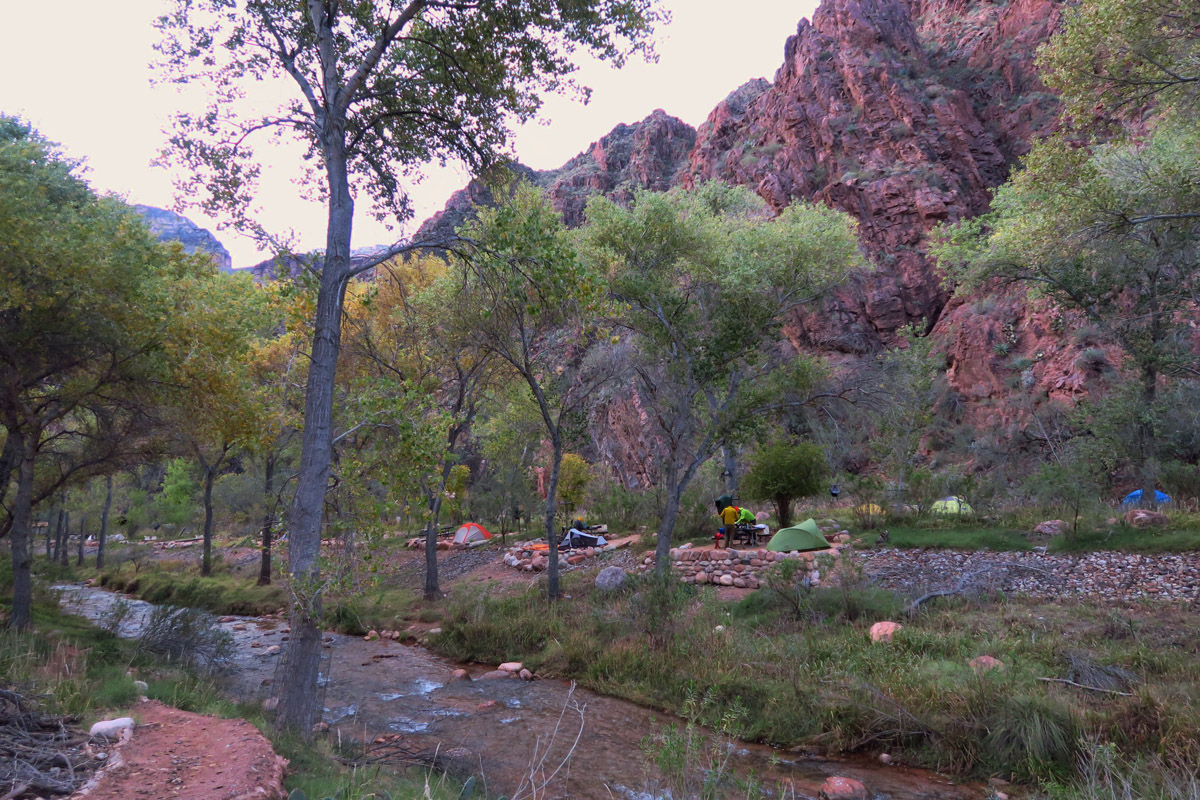 Bright Angel Campground along the creek by the same name. 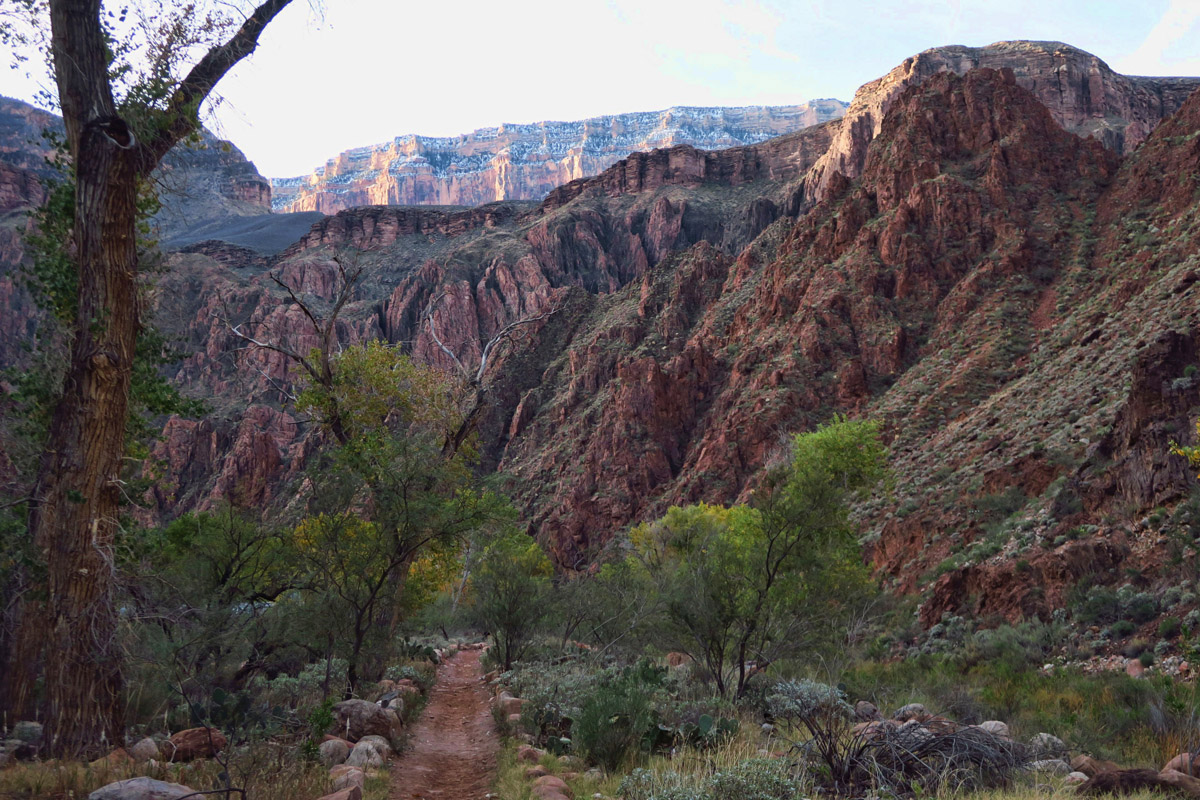 Trail between the campground and Phantom Ranch. Along that uppermost ridge, you can see the lights of the historic Kolb Studio shining at night. 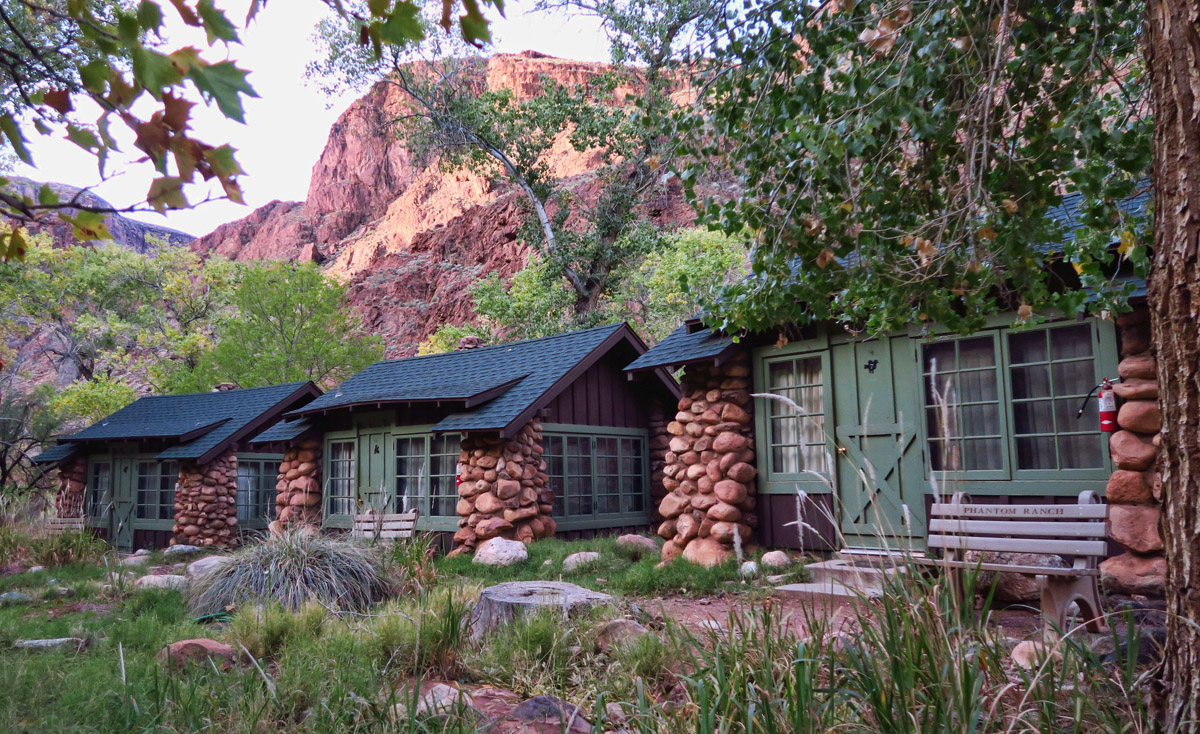 If fifty bucks seems like a lot to pay for a 10-person dorm room, you should see the meal prices.   It costs me as much for a steak dinner as it does a good night sleep.  But oh, let me tell you….it was the best steak dinner I have had in months! 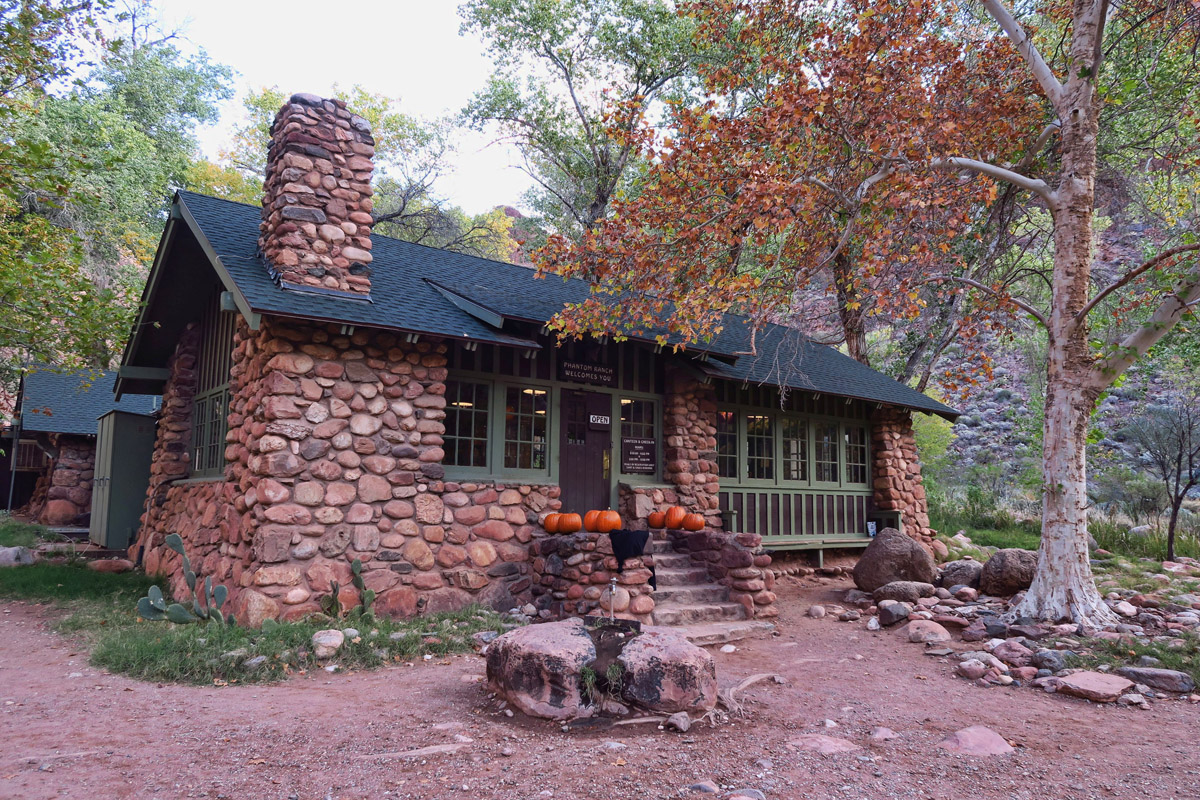 This is “The Canteen” location for all meals and libations. 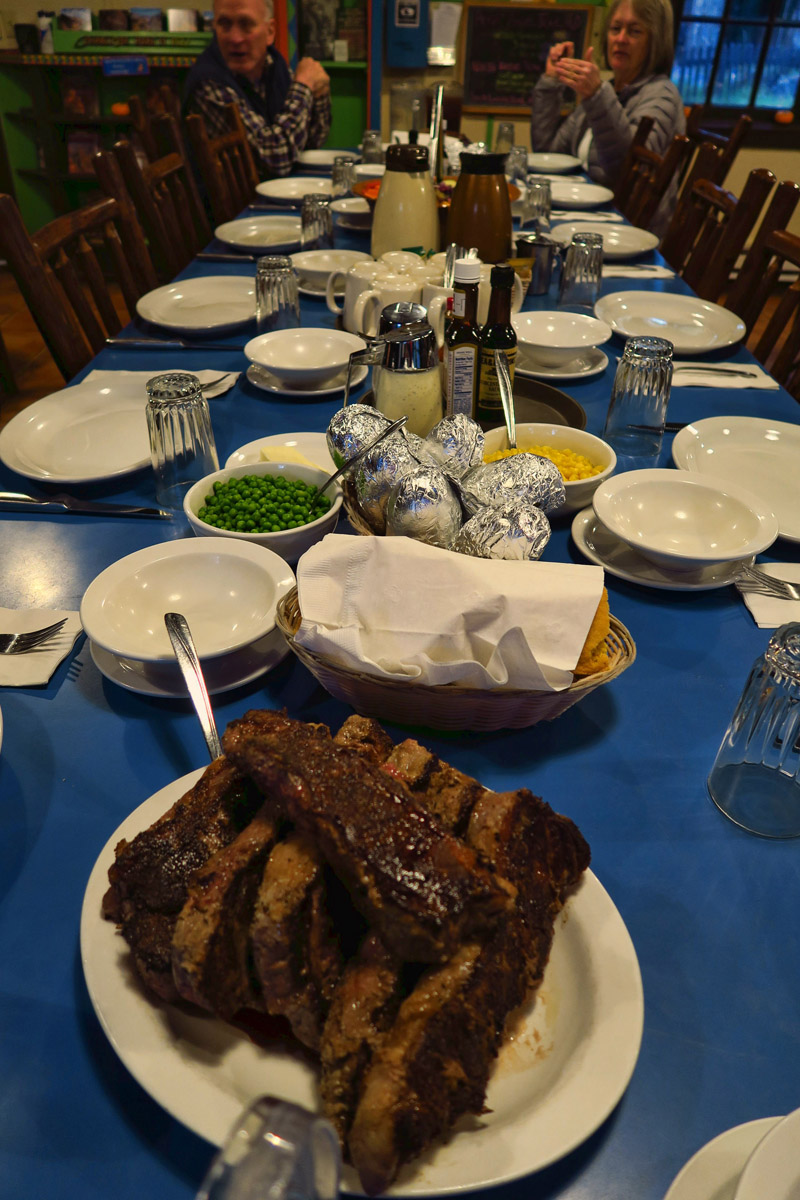 Steaks were grilled to perfection. 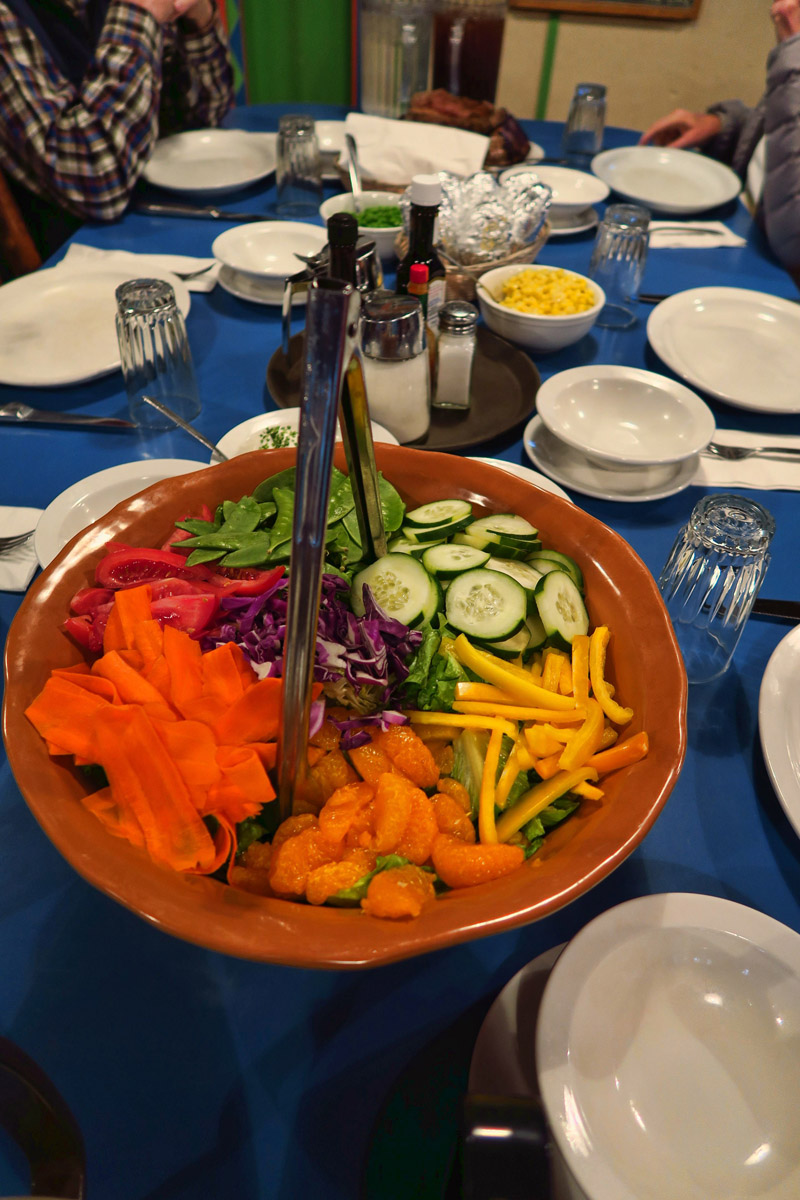 There are two meal shifts each day – the early breakfast at 5:30am, and the “late” (LOL!) breakfast at 7:00am.   Dinner is also served in two shifts.  The steak dinner is served at 5:00pm, while the Hikers Stew seating is at 6:30pm.  All meals are served family style.  And if you think food tastes better on a camp-out, you should sample the fare at the bottom of the Grand Canyon!   The steaks are seared to perfection, while the Hiker’s Stew is sublimely seasoned.   Add to that the anticipation of hearing the dinner bell “dong,” salivating like Pavlov’s dog after a full day of hiking, and it is, as the MasterCard ad says, “Priceless!” 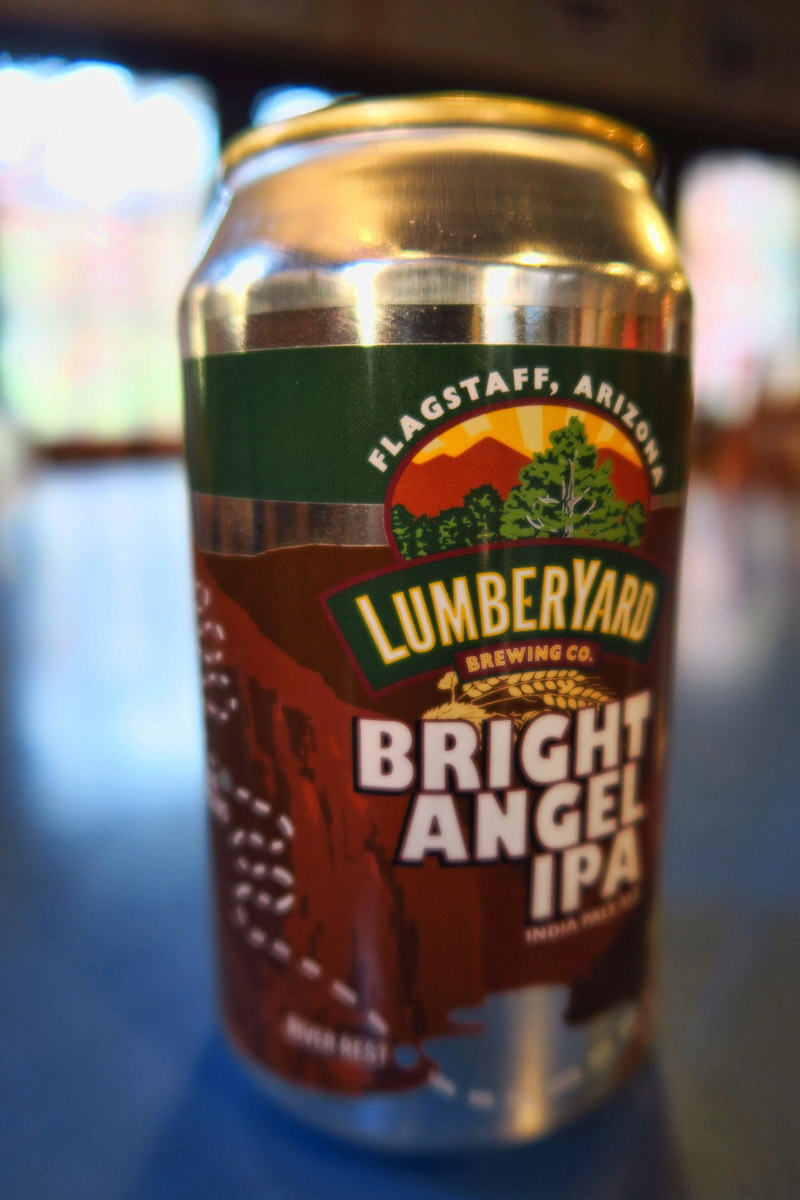 I’m not an IPA fan, but this beer can design is a winner! It’s got the Bright Angel trail map on the side of the can. 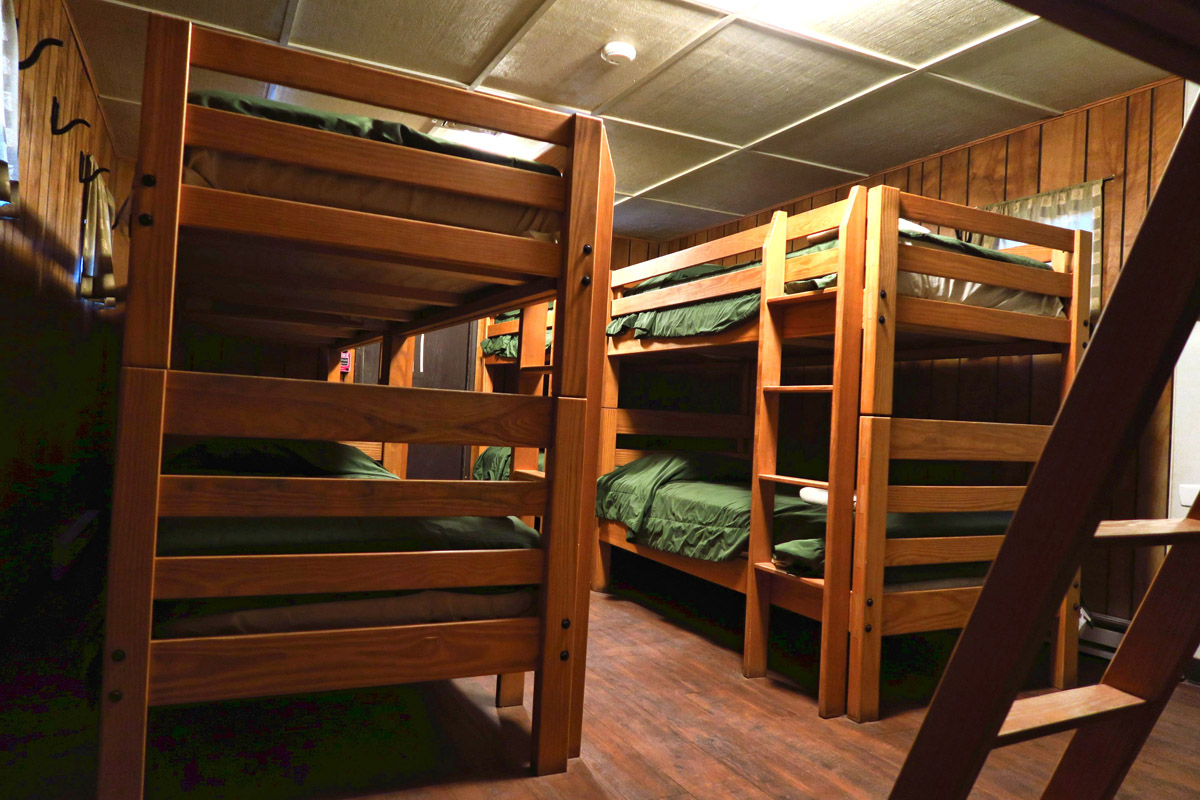 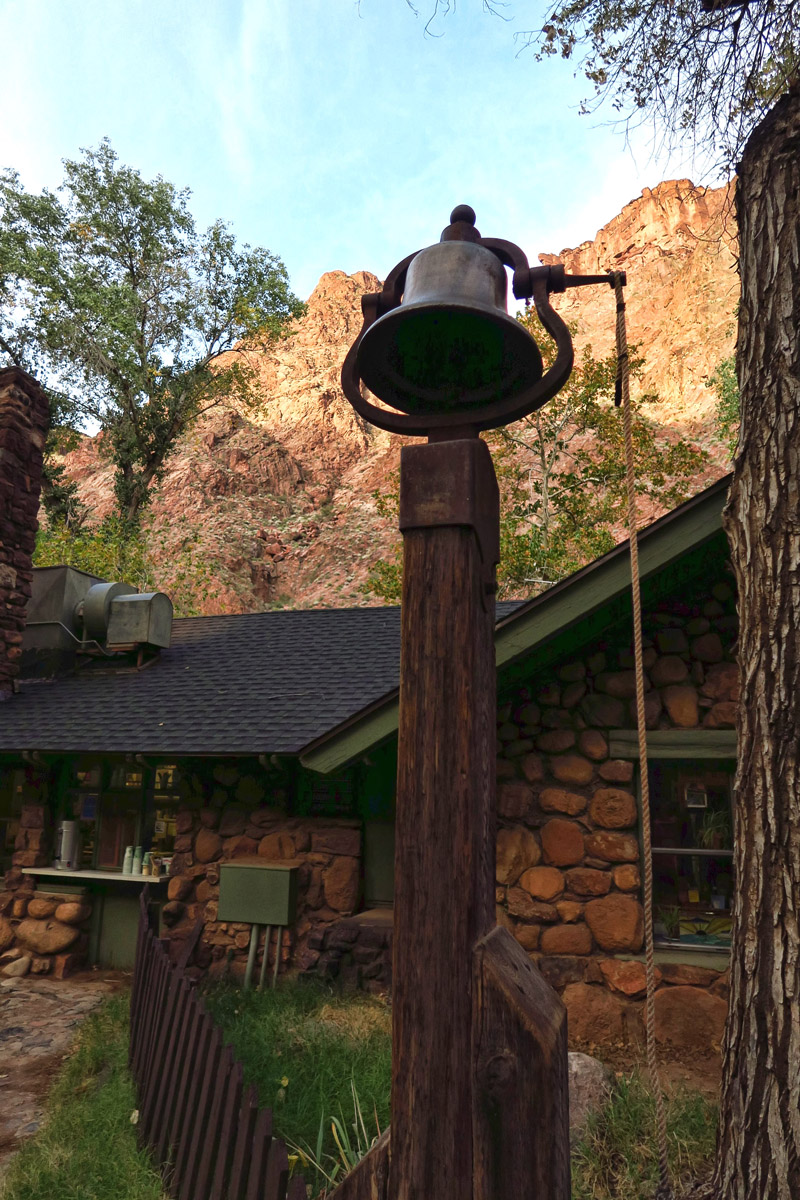 The much anticipated Dinner Bell.

I did do a bit of “soul searching” over my two beers when the sobering realization hit that some poor animal had to carry the cans down and back up again along the steep canyon paths, strictly for my enjoyment.  But where does one draw the line at such standards?  As an animal, is carrying my dinner any more preferable to being my dinner?  They rationalize it by saying these are “working” animals, bred with a job to do.  Well, at least I didn’t ride one.  But it did give me pause. 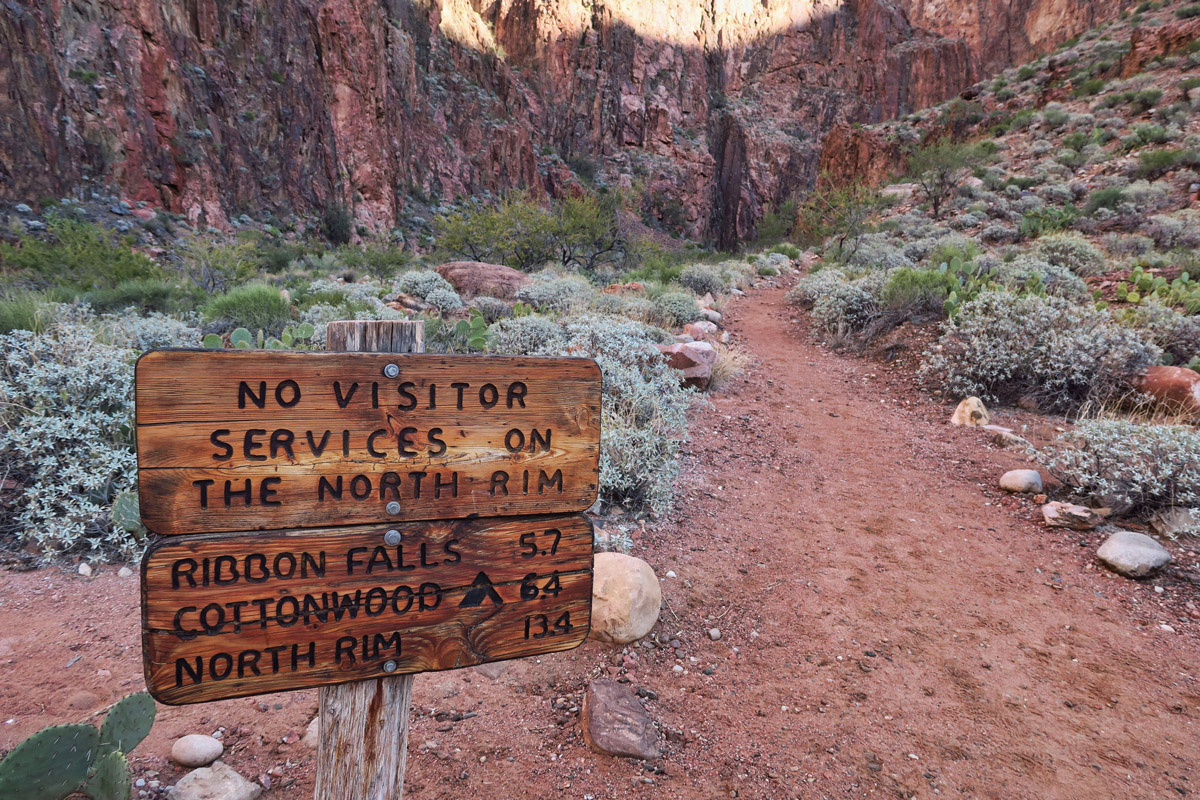 No services at the North Rim. Ranger Gaelyn has left the canyon… 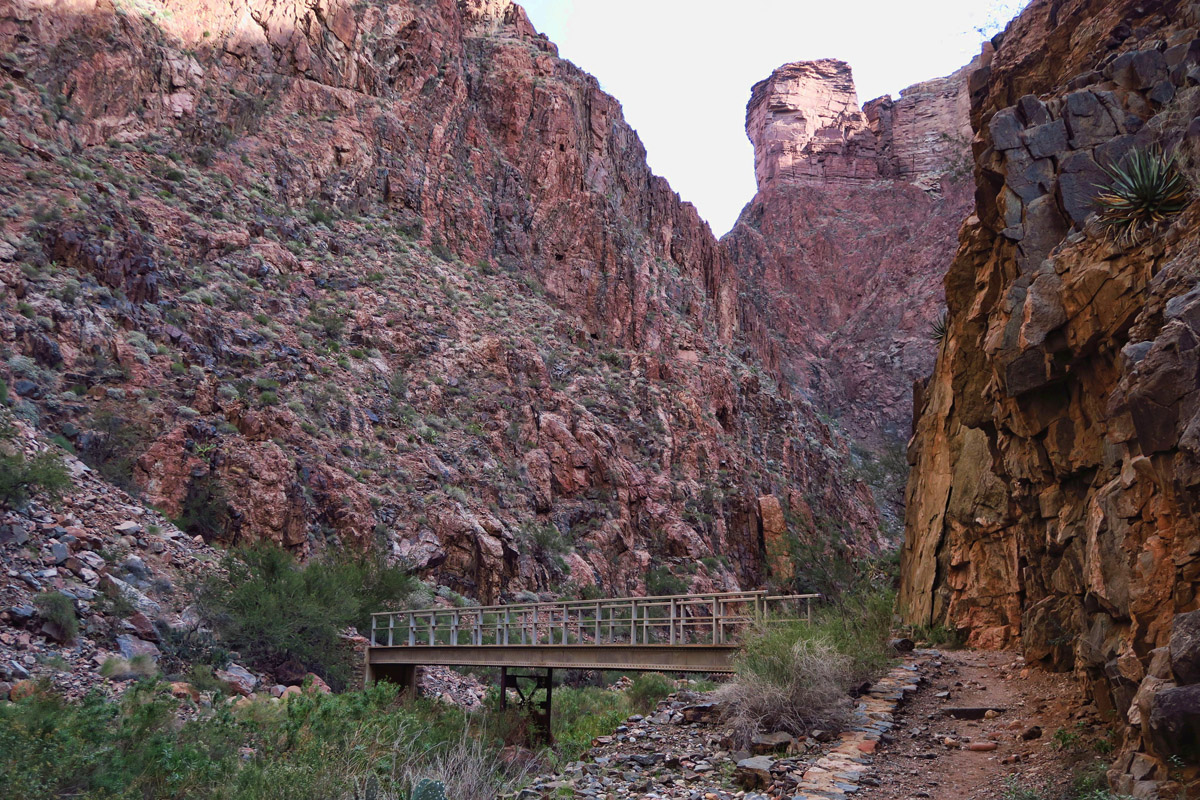 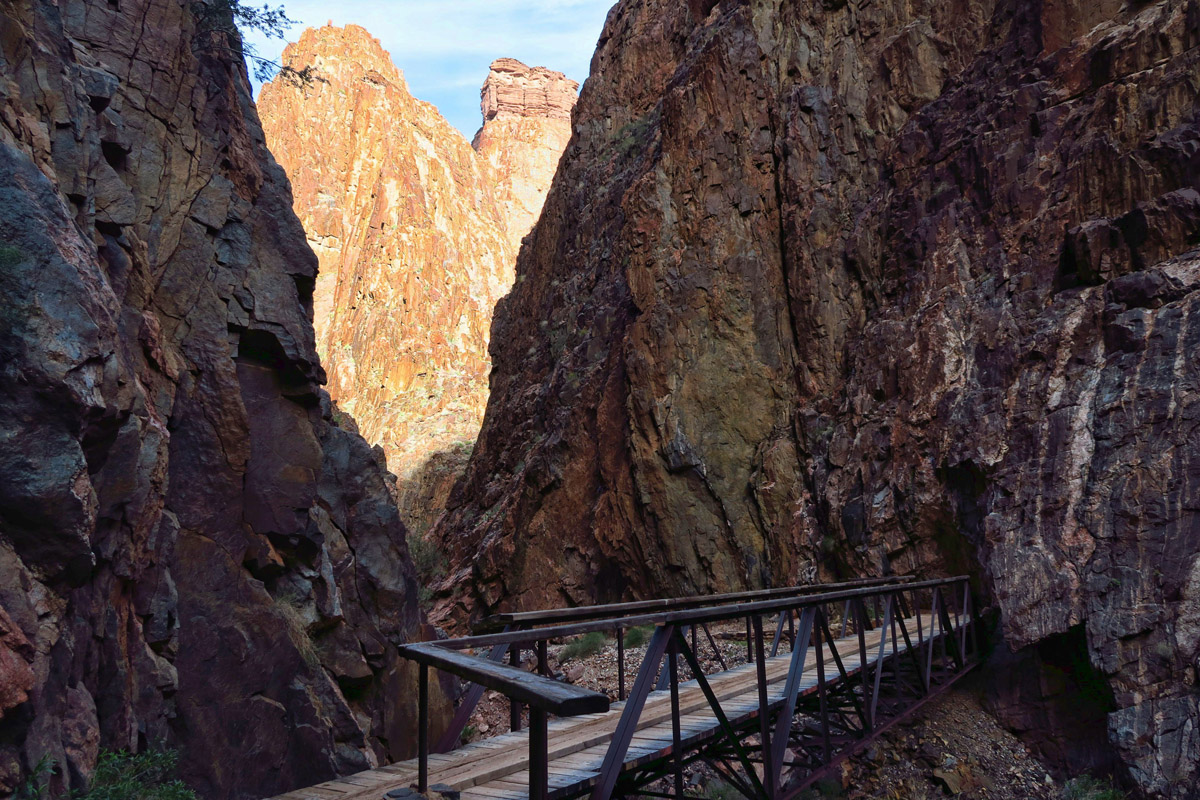 Hiking through “The Box” or Bright Angel Canyon.

I booked two nights at Phantom Ranch because I thought I might need a day of rest in between my South Kaibab entrance and Bright Angel exit. The long, 10.5 mile hike out with almost 5,000 ft in elevation gain is haunting me. The climb out of the canyon has had me psyched out long before I made the hike into the canyon. So I figured I’d just book a day in between to explore around the ranch and spend some time alongside the river. Although Ranger Gaelyn and several other hikers around the dinner table all extolled about the beauty of Ribbon Falls, well, that’s a 12 mile round trip hike from the Ranch…way too far for my “day off.” 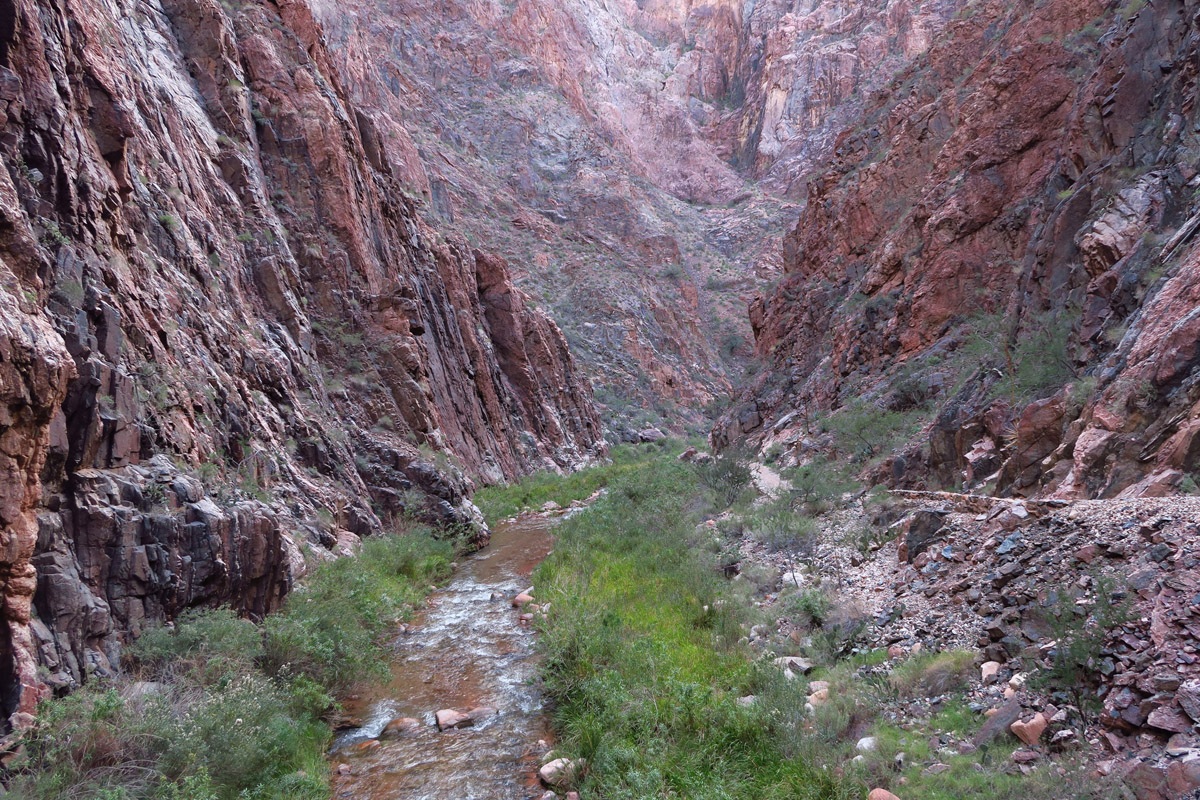 This narrow gorge is reported to be the hottest part of the canyon in summer months. 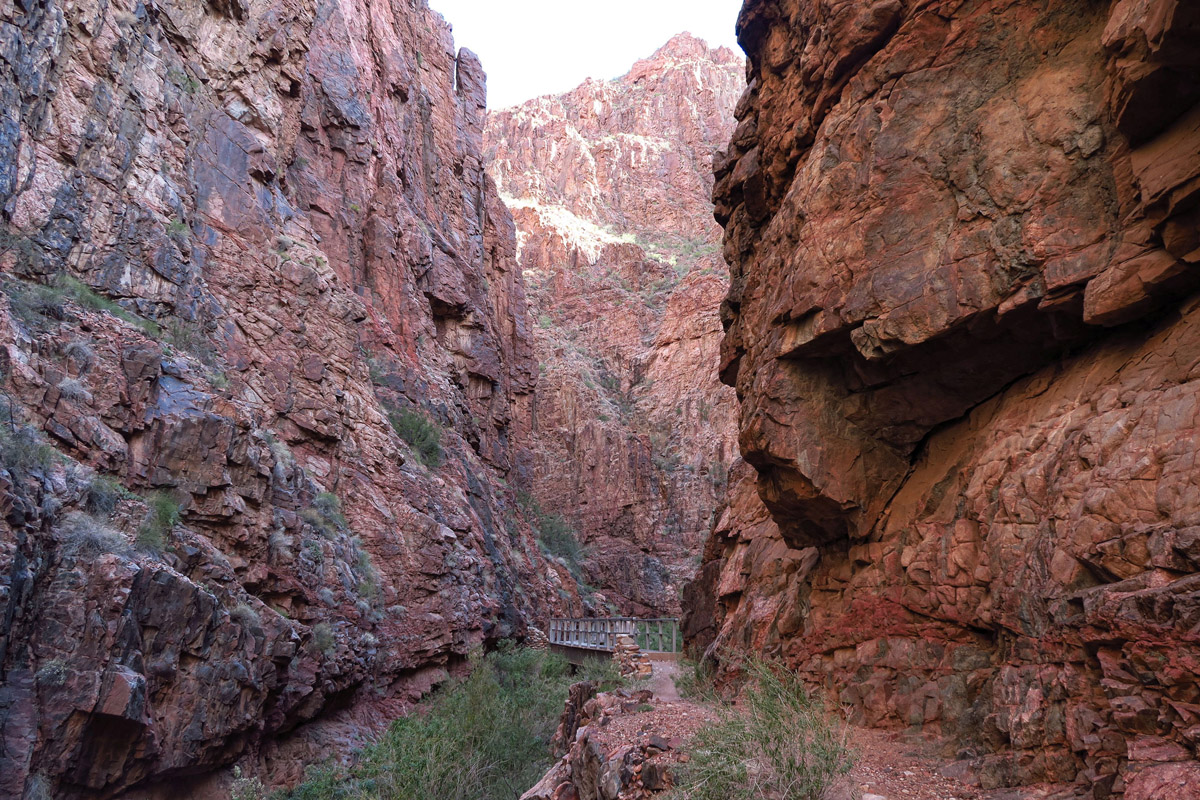 Note another foot bridge coming up for scale… 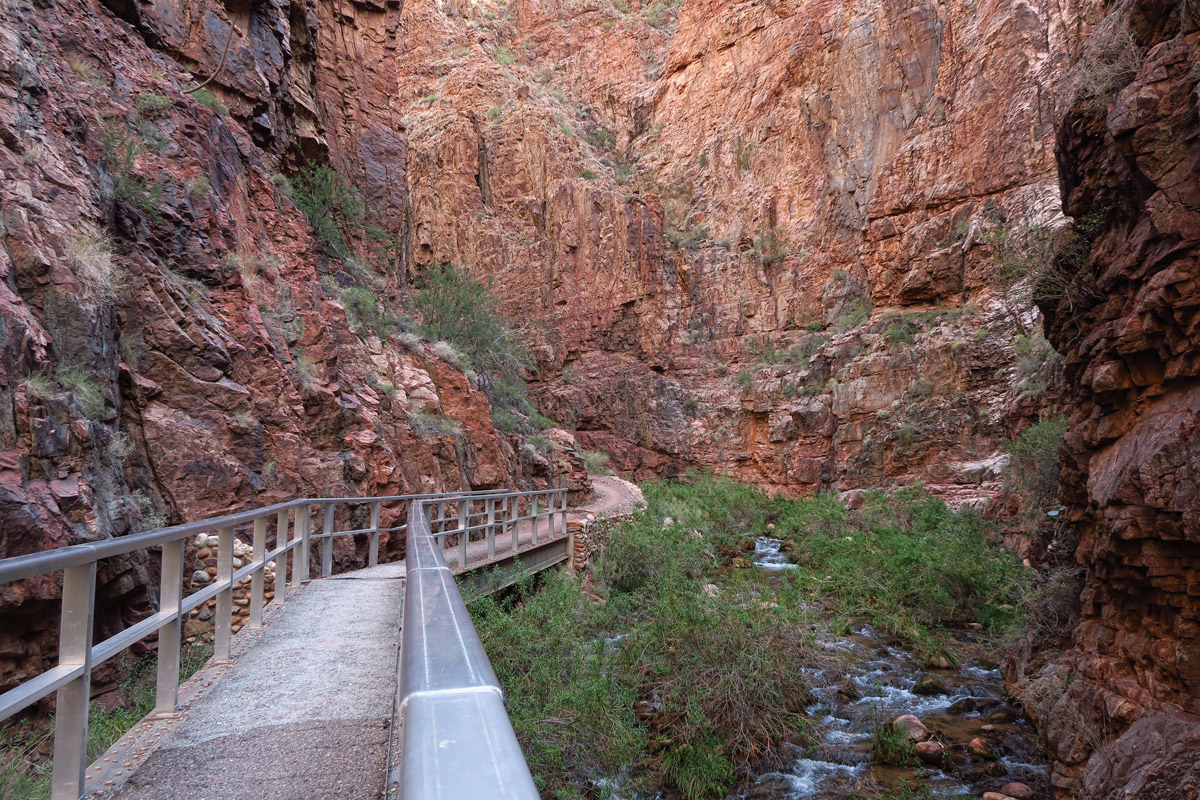 Since the North Rim is closed at this time of the year, there is no shuttle service back around to the South Rim.  So unless one wants to hike a “Rim to Rim to Rim,” meaning cross the canyon twice, one must exit back out to the South Rim from mid-October to mid-May.   Still, I’d like to see a bit of the North Kaibab Trail, the only northbound exit trail out of the canyon.  Ribbon Falls is almost halfway up the North Kaibab Trail.   The first three miles follow the Bright Angel Creek through a deep, dark gorge referred to as “The Box.”  This part of the trail is reported to be reasonably flat, so I figure it will be a good option to keep my legs limbered up on my day off. 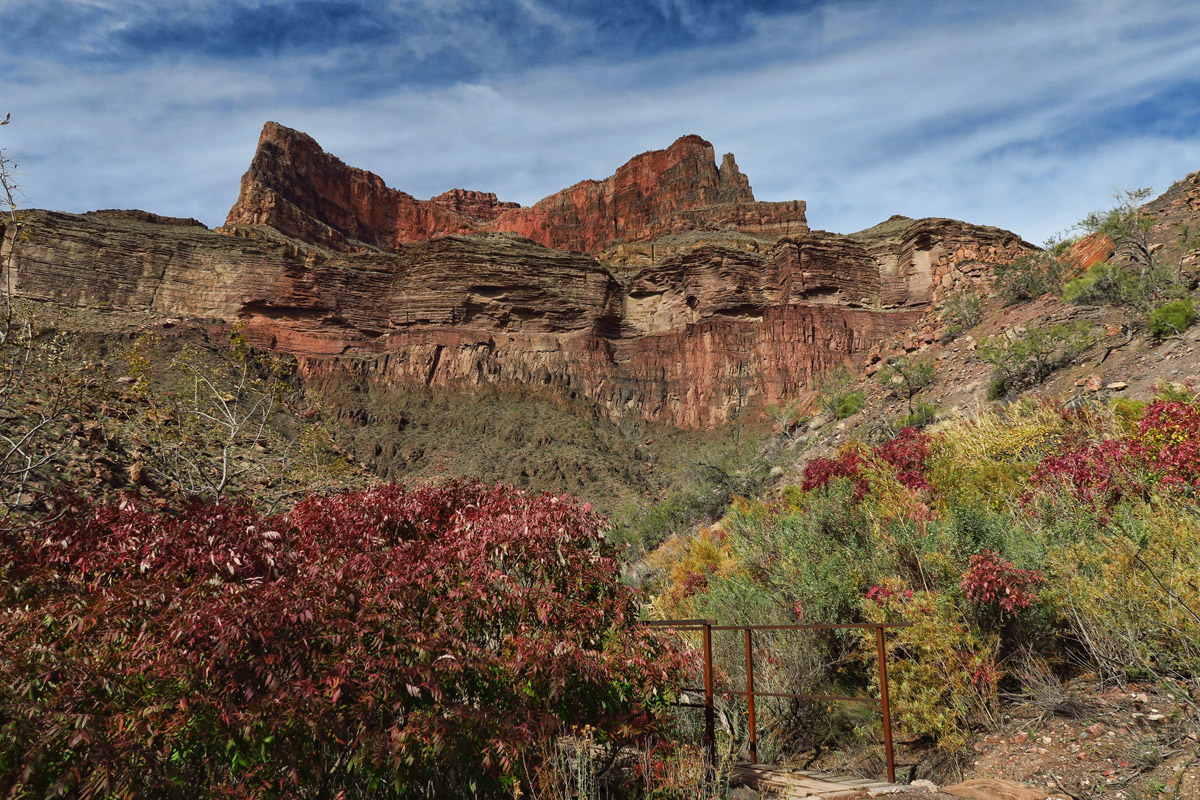 At around 3.5 miles the canyon walls open up. 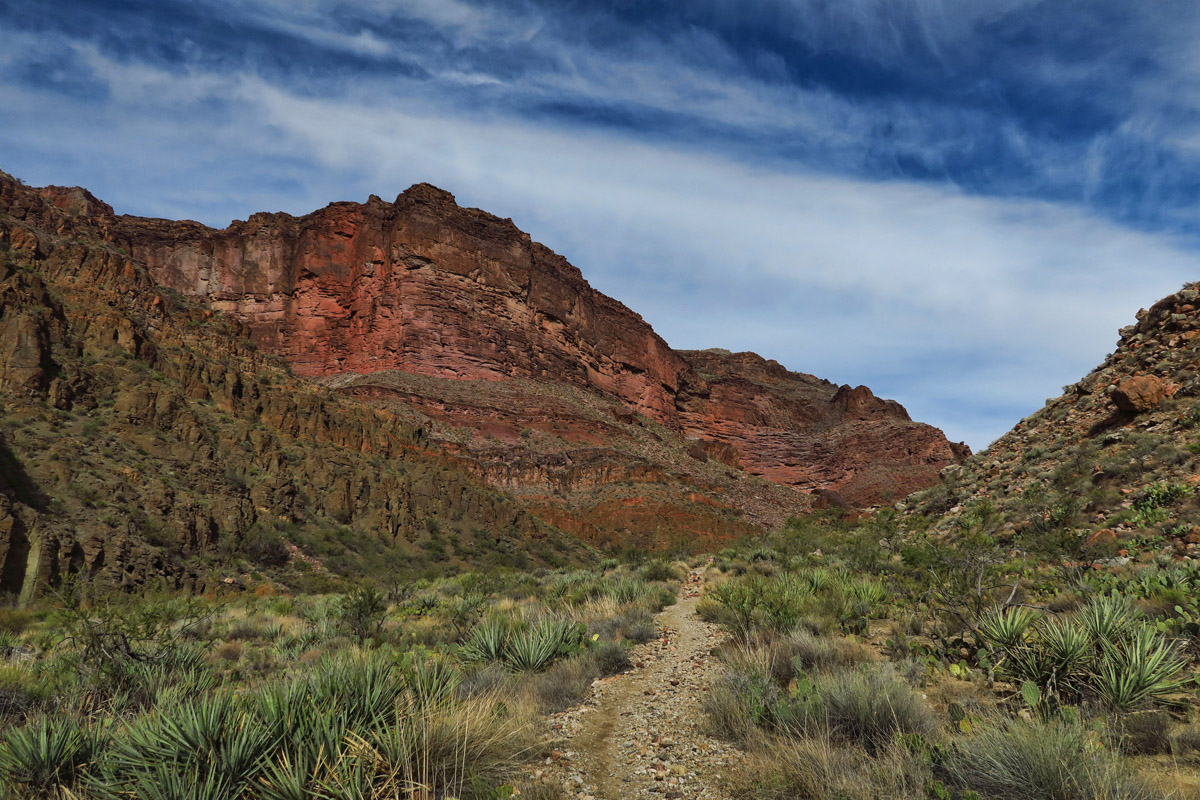 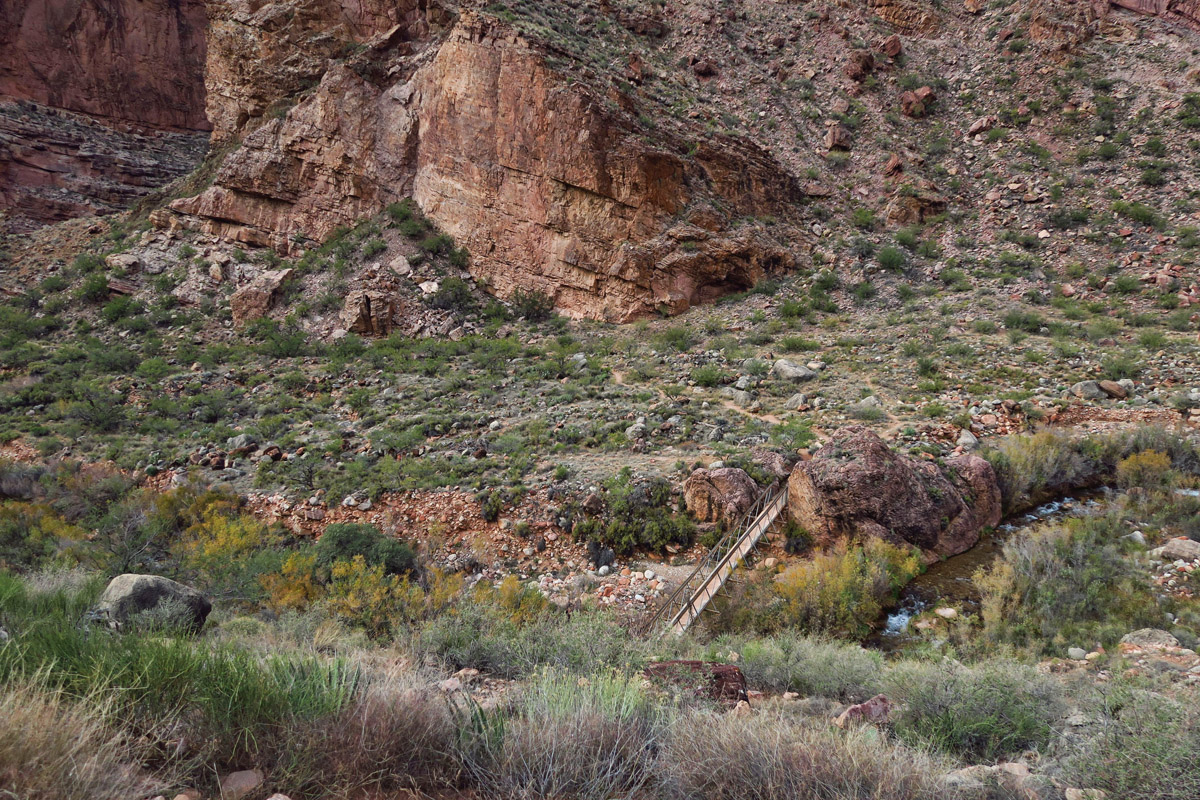 Finally, the sixth bridge over Bright Angel Creek, this one leading to Ribbon Falls.

But once I get started, I don’t want to stop.   The scenery in the Box is gorgeous, following chiseled cuts through basement rocks of Bright Angel Canyon, with the sound of the rushing creek echoing across the narrow gorge.  Though it doesn’t end there, as the scenery continues to be awe-inspiring once the canyon walls open up around the three mile mark, and desert gardens appear.  I meet very few hikers coming in the opposite direction, but hands down, everyone says “You MUST go to Ribbon Falls…it’s a long way, but SOOOO worth it!”  So I keep going…and going…and going. 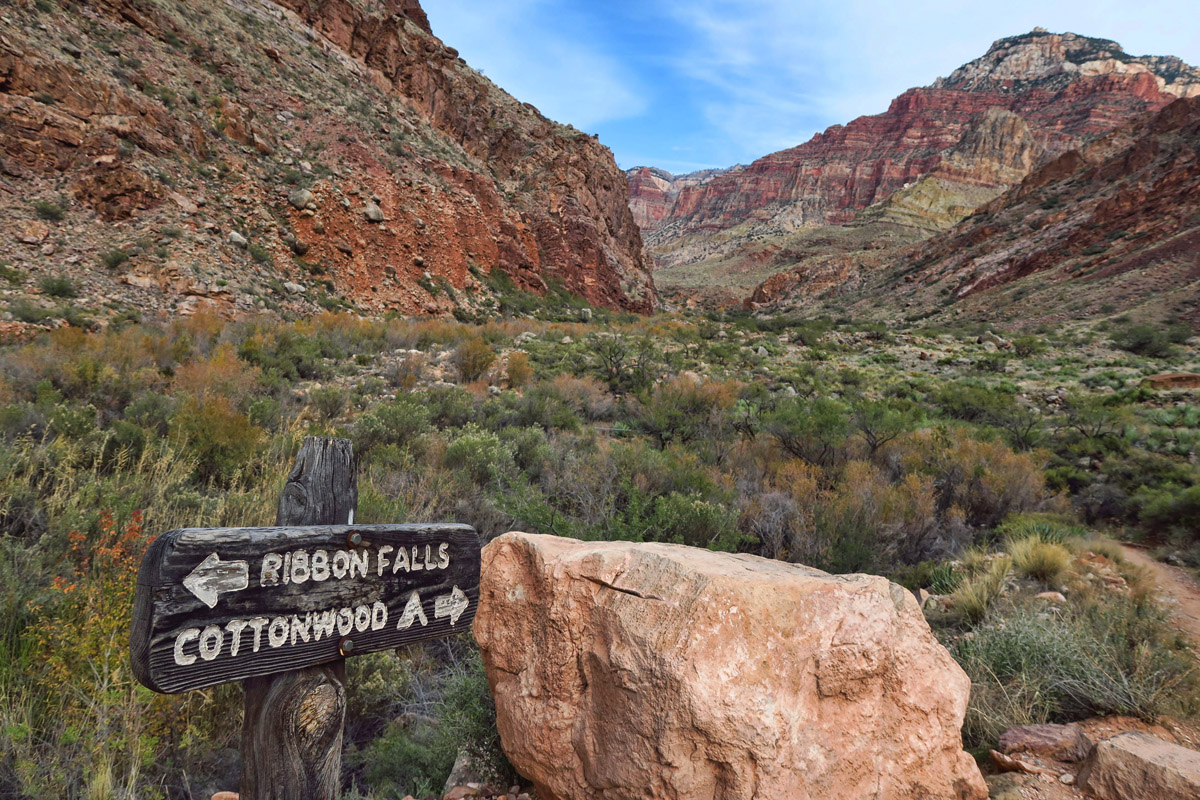 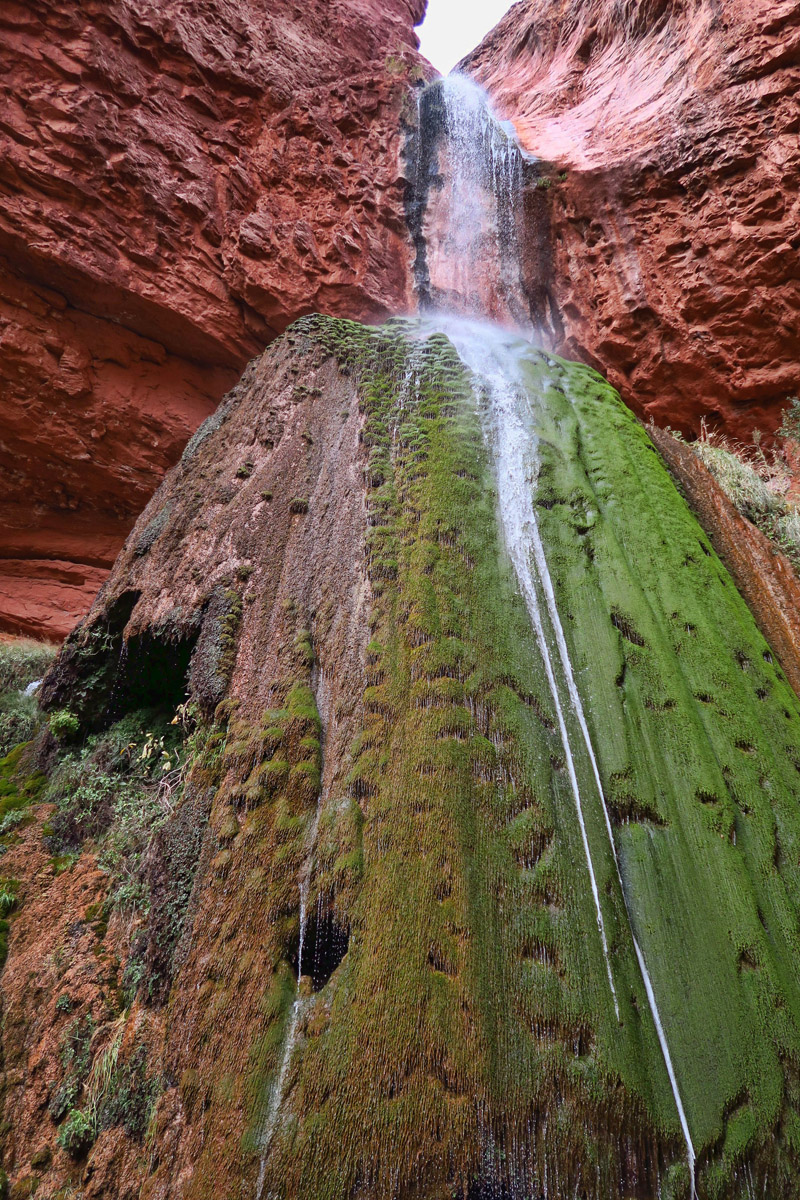 It’s this green, mossy travertine “cone” that makes the falls so unique. 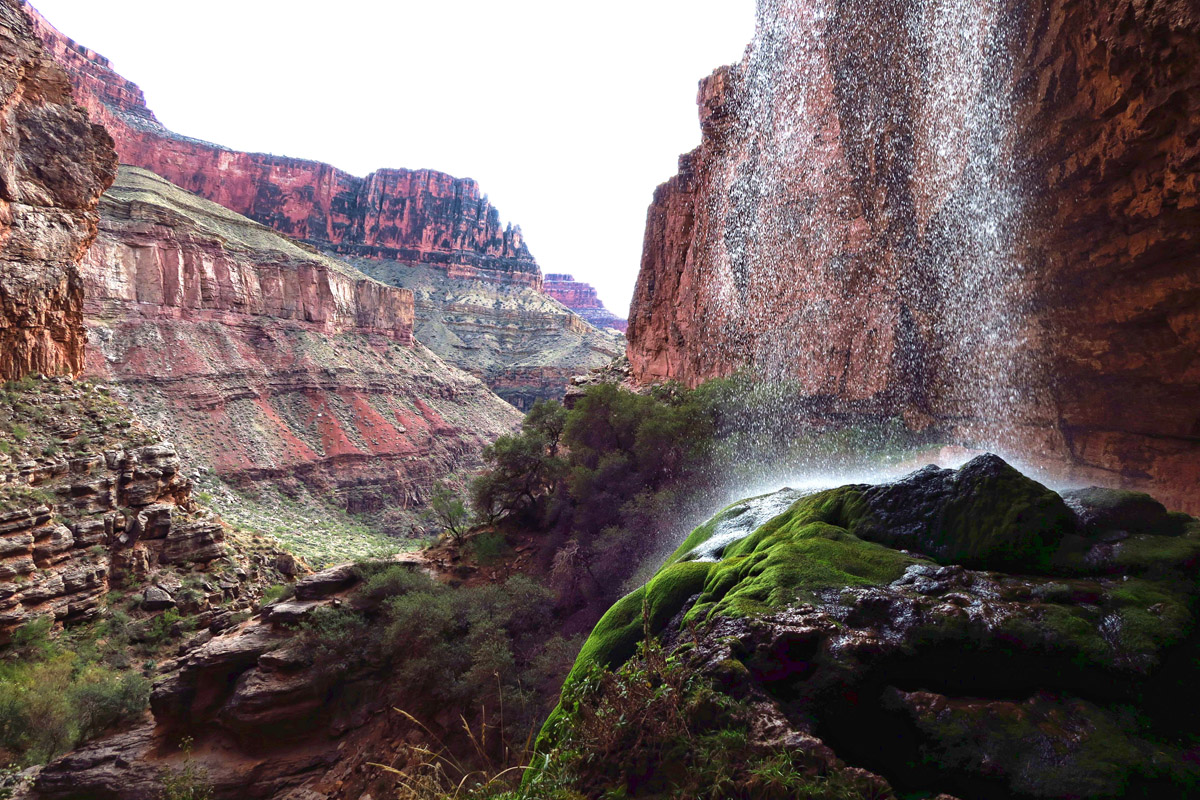 Taken after having climbed behind the falls…

The last part of the six miles to the falls is the hardest.  I have a turnaround time of 1:30pm in order to make it back in time for my expensive steak dinner.  A couple of hikers tell me to take off my boots and cross the creek….it will cut half an hour off the hike, and save me from having to climb up what I later learn is known as “Asinine Hill” to reach the hikers bridge.   I take the cutoff toward the river, but can’t find a place where I could comfortably cross.   If I weren’t alone, I would have no qualms.  But the river is cold and swift, and I only have one pole with me.  I just don’t think it’s a good idea to cross since no one knows I’ve ventured this far.   So I turn around back to the trail and continue on up the grueling hill.   I make it to the falls by 1:10pm, with twenty minutes to spare to explore the falls. 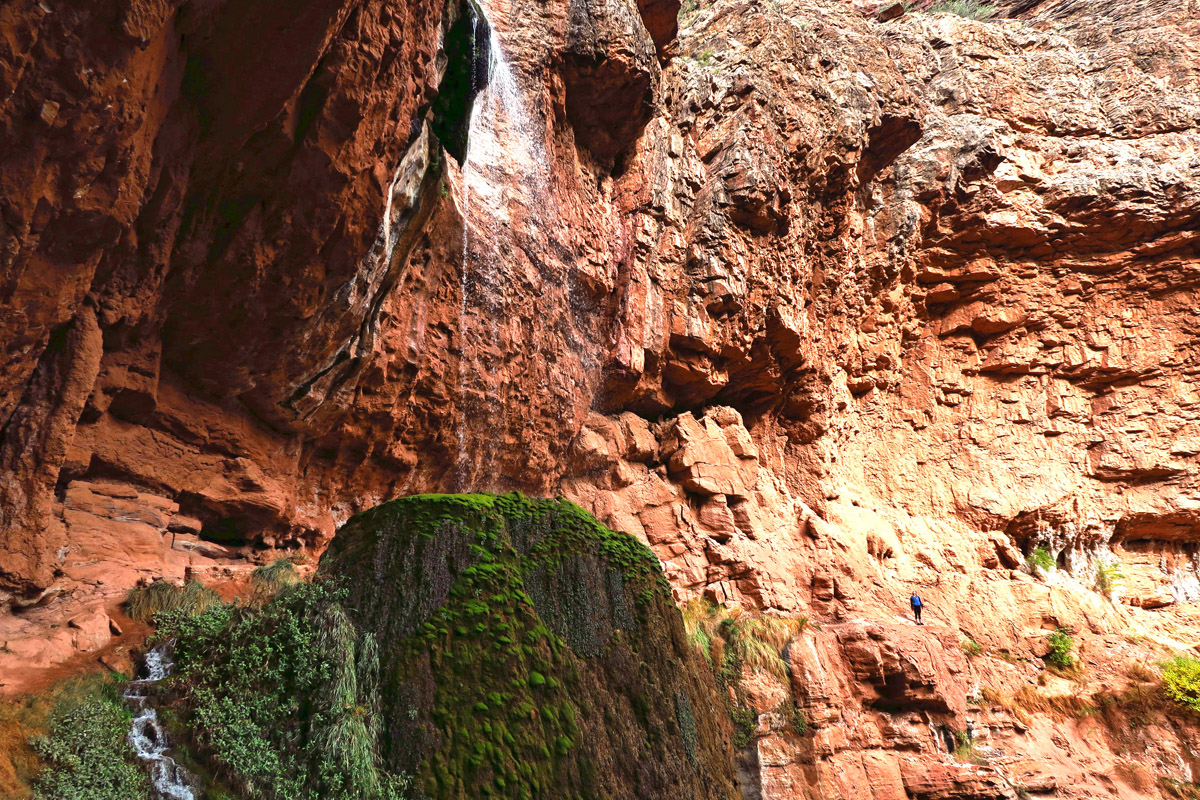 For size perspective, look for that tiny blue dot in the lower right corner….that’s Alice. 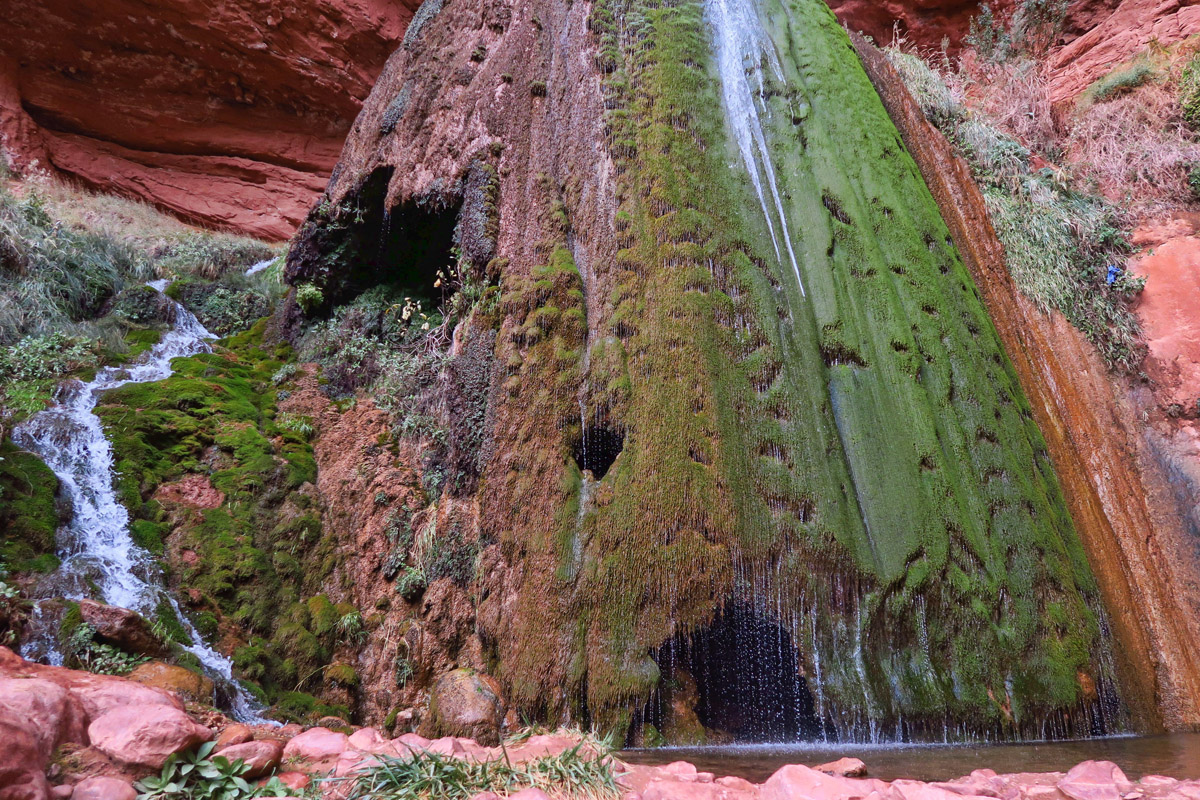 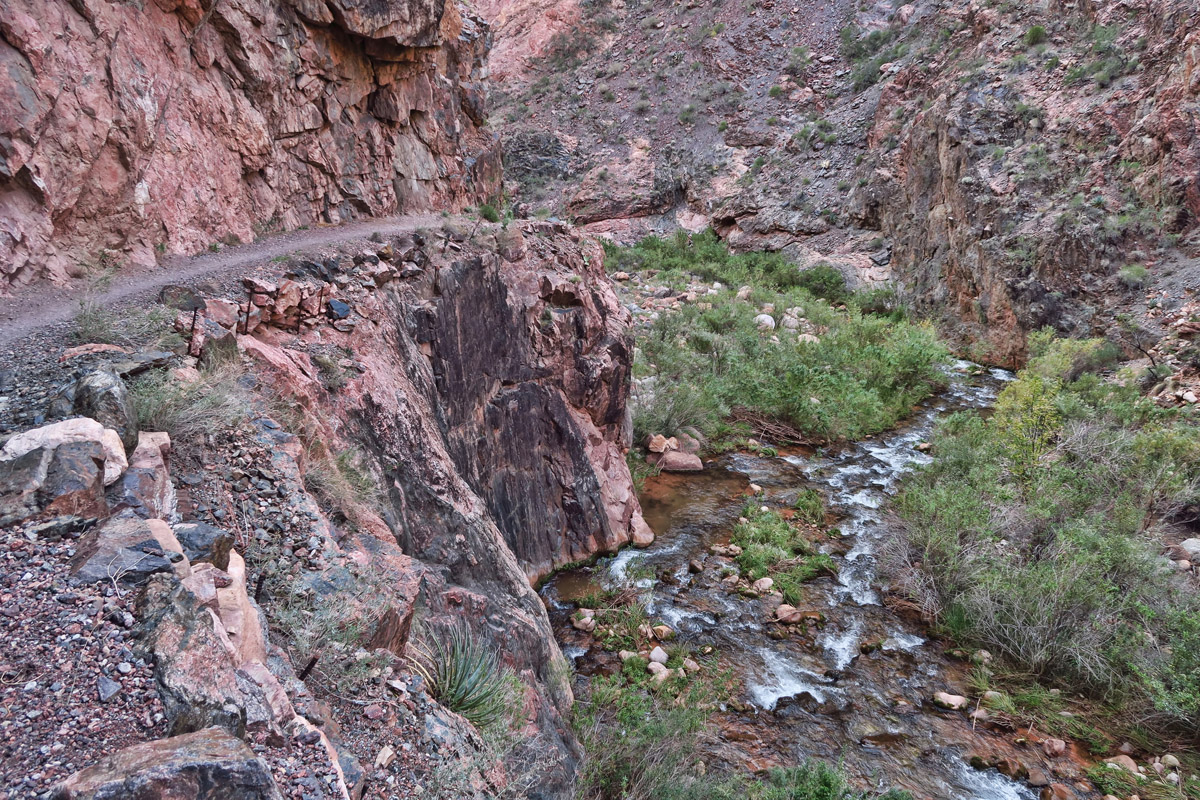 It is a beautiful hike with a total of only 1,200 ft elevation gain.  One must cross six foot bridges zigzagging across Bright Angel Creek to reach the grotto at the base of the falls.  Then there’s a small dirt trail that continues up, passing behind the veil of a waterfall. 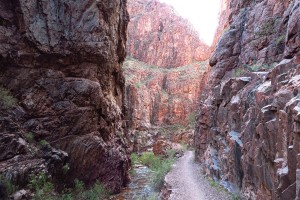 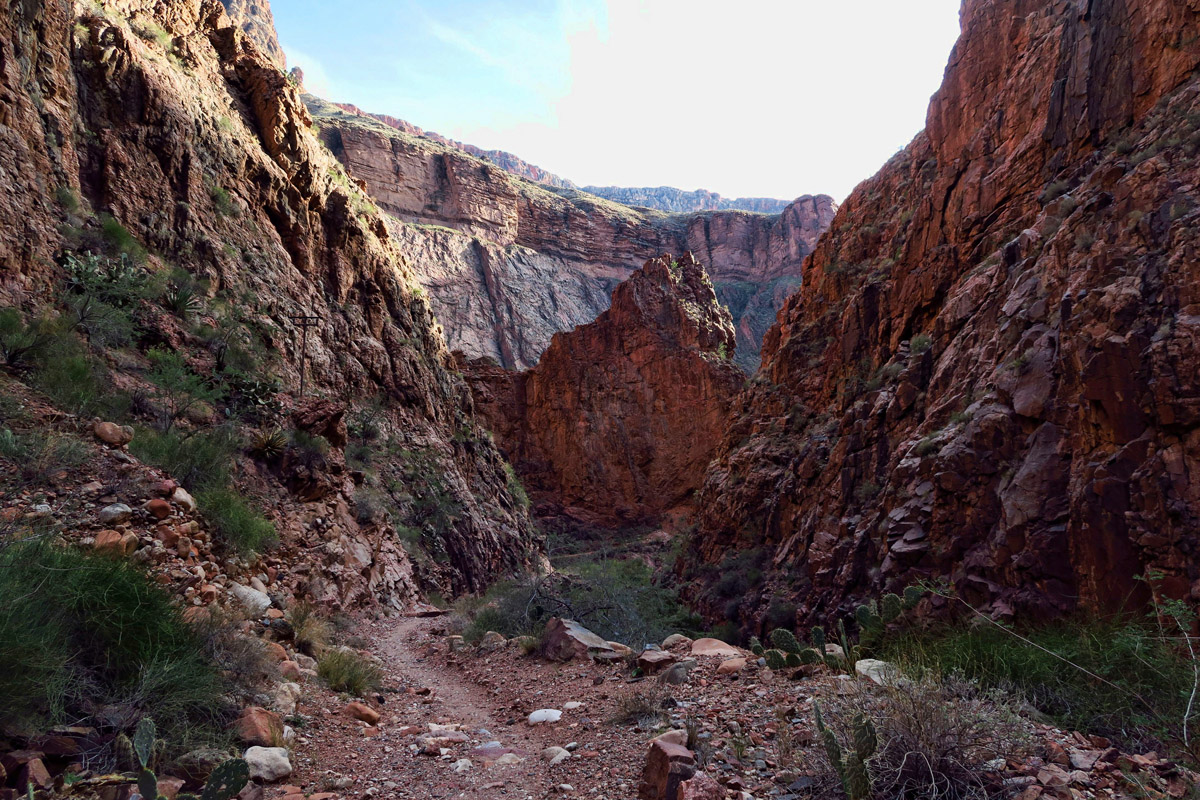 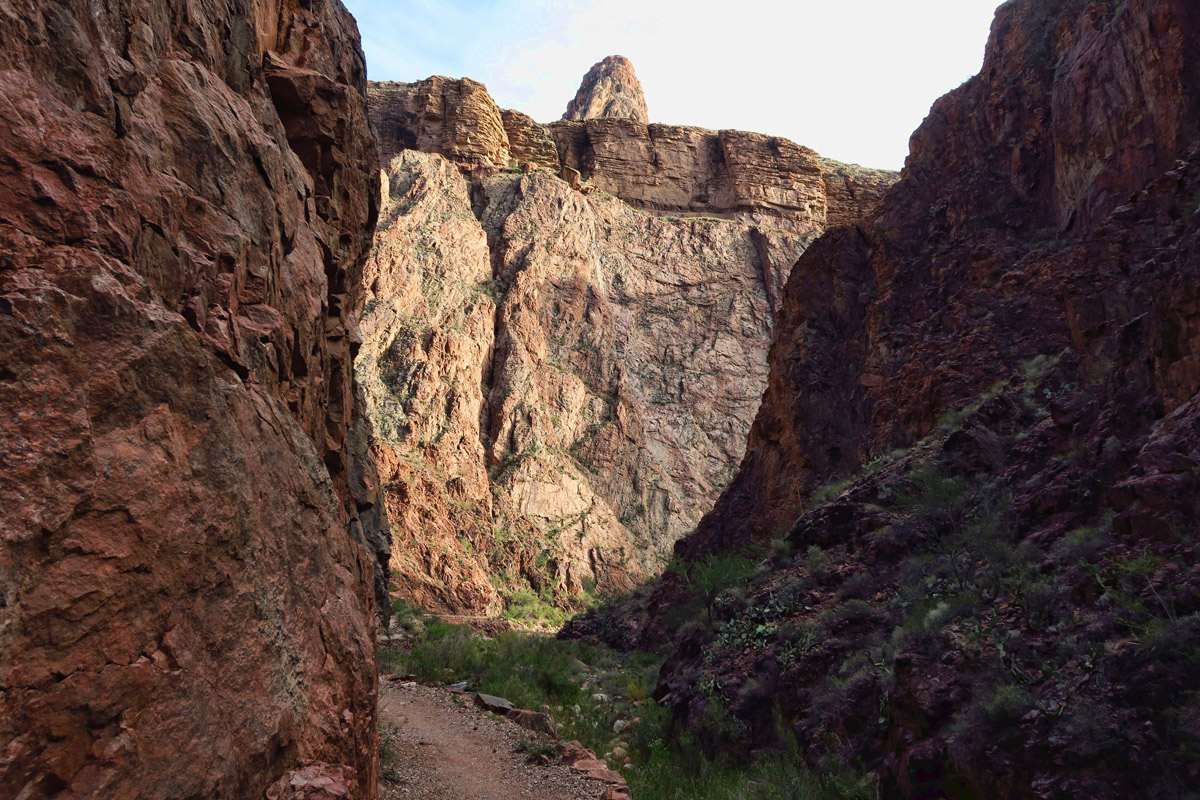 I have the falls all to myself with one exception.  Since leaving Phantom Ranch, I’ve been “leap frogging” a young woman, Alice, another solo hiker on the trail.  Alice is from Montreal, and is riding her bike through the US.  She began her journey in Vancouver, has ridden down the Oregon coast, through Utah, and is on her way to Florida.   Solo.  In the winter.  On a bicycle.  I really admire her tenacity.  As we take turns overtaking each other, both to Ribbon Falls and back, as well as on the hike out the following day, we exchange a little more of our respective “stories” at each rest stop. Two women traveling the same road, yet on such different journeys. Alice is definitely on the road less traveled. 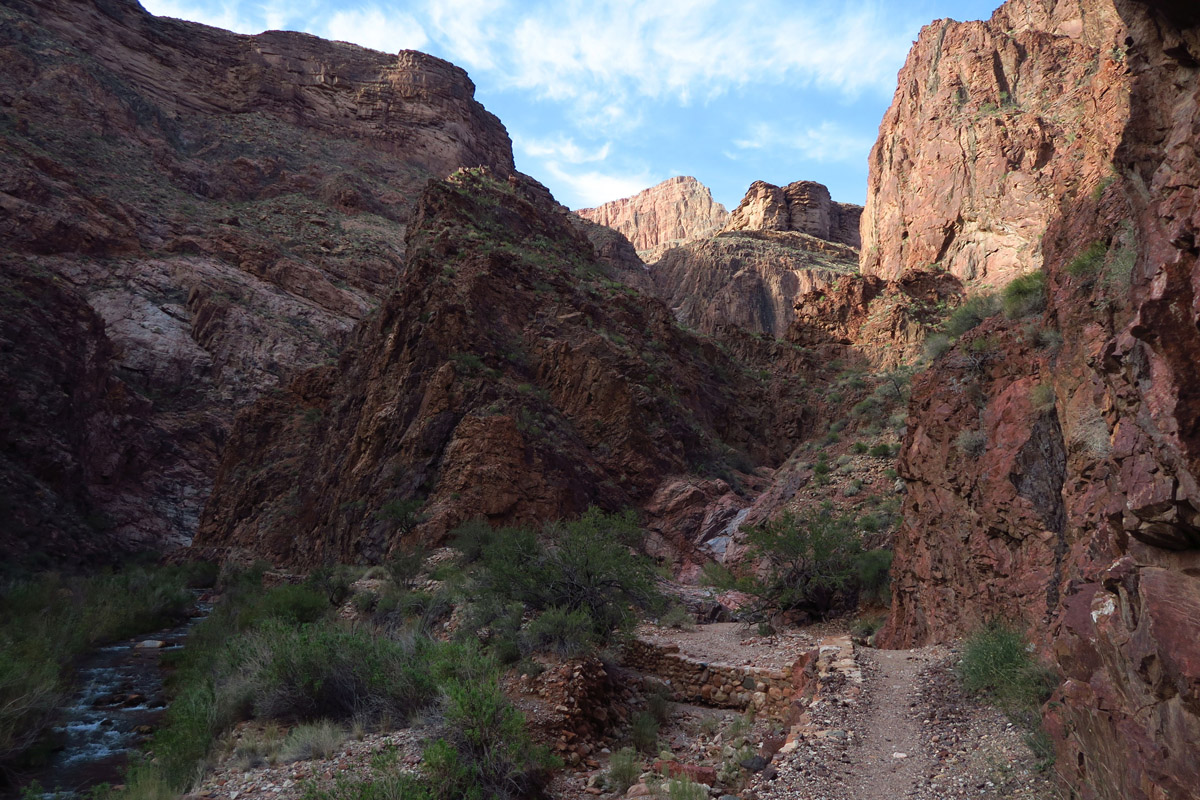 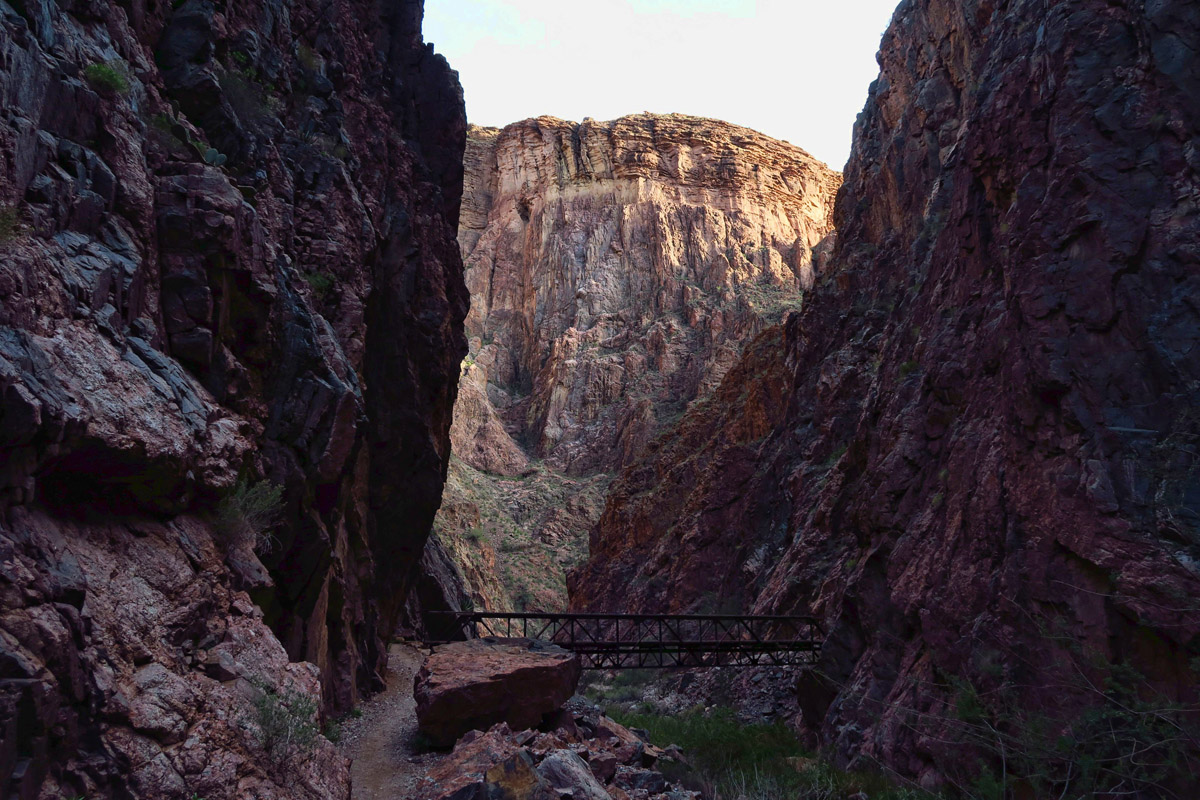 I make it back just in time for the dinner bell.  Prior to each meal at Phantom Ranch, the server who singlehandedly “seats and greets” the 48 dinner guests, stands up to give a short welcome.  During each one of these brief talks, the special interest stories vary.  One might talk about “a day in the life” of a Phantom Ranch employee, while another might tell of the Native American pilgrimages to sacred spots like Ribbon Falls or Phantom Canyon.  But one consistent message delivered is that of the five million visitors to the Grand Canyon each year, only ten percent venture below the rim.  Fewer than one percent make it all the way to the Ranch.    Suddenly, fifty bucks a night to sleep at our National Park’s “most exclusive lodge” doesn’t seem so bad, even if it is in a dorm room!

Next Up:  Hiking out the Bright Angel Trail

13 thoughts on “The Ranch to Ribbon Falls”