I’ve been in the market for a waterproof camera for a few years now.  I can’t seem to find one that meets my need.  My last attempt was a Canon Powershot waterproof, which I had to return because it fogged up at the first sight of moisture.  Since that time, I’ve been looking, but hesitant to buy without some known recommendation.

Recently, I read a review on the Wynns blog whereby they reviewed the GoPro camera, along with several much less expensive knock-offs.   When comparing the quality versus price, one camera peaked further interest, the SJCAM SJ4000 Action Cam. 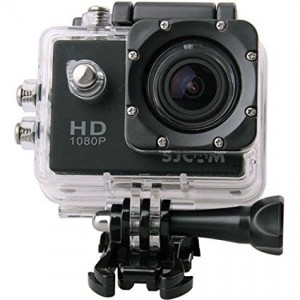 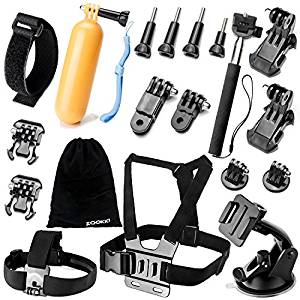 A whole lot of plastic crap came with it…

I’m not a videographer.  I rarely shoot video. I’m not sure what I’d do with it if I did.    So I’d never considered a GoPro, even though the camera is known for its waterproof features.  With a price tag of over $400, it seemed a bit of overkill to consider a video cam for my needs, like buying a motorhome to stay parked in the driveway.  However, the price was right on the SJCAM.  The camera itself was only $67, or a little over $100 fully loaded with accessories including SD card.   Based on the video shot by the Wynns, it was a risk I was willing to wager. 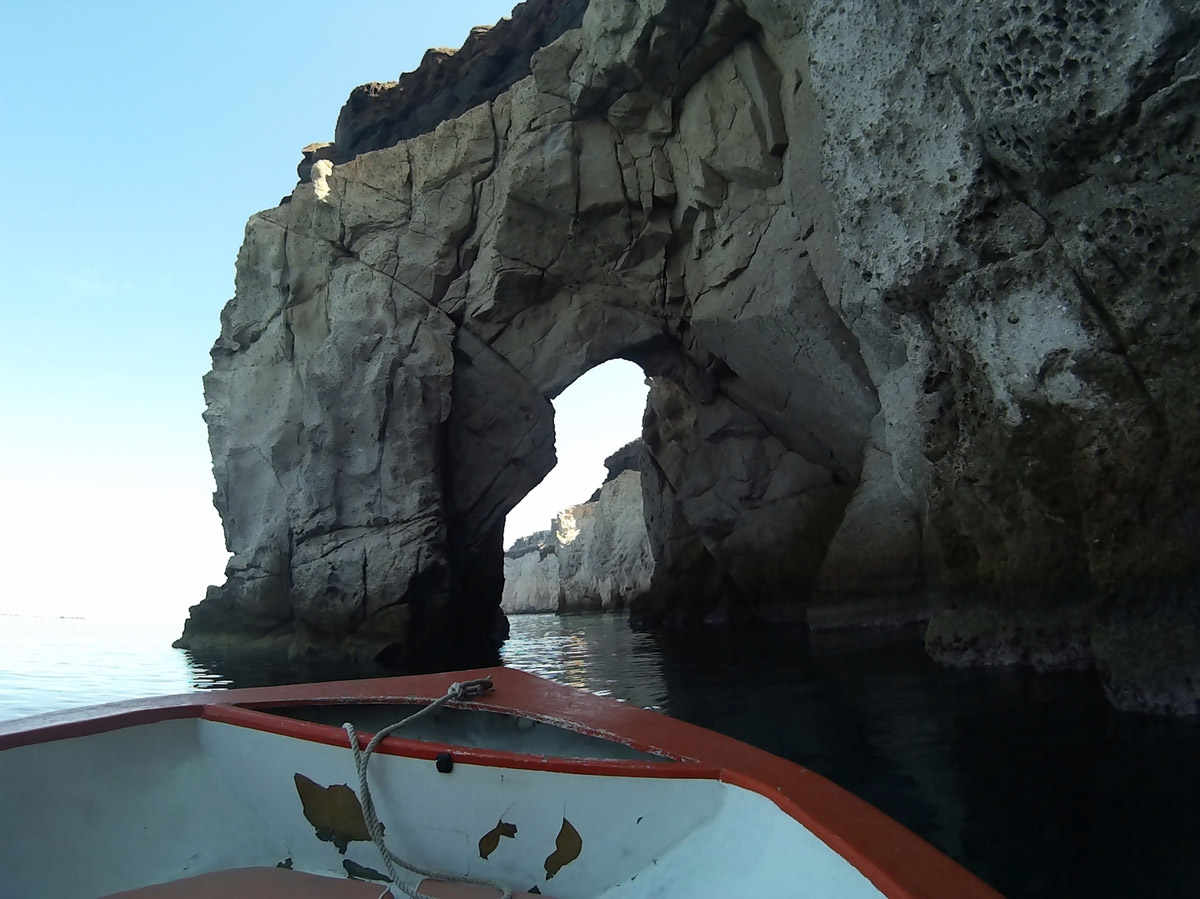 Camera has a bit of a “fish eye” lens, which works well under water, but not so much above the surface. 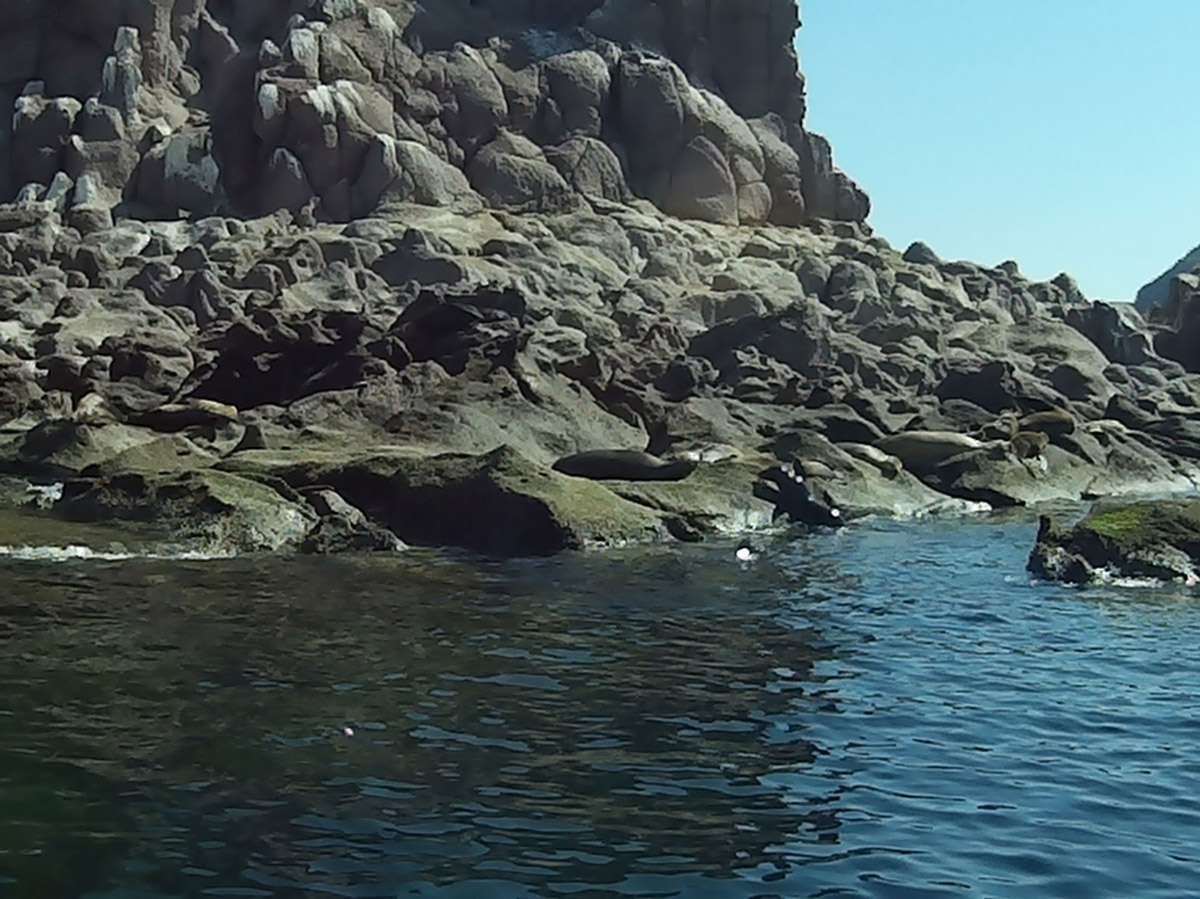 It doesn’t seem to have much depth or contrast, as it’s hard to tell the sea lions from the rocks… 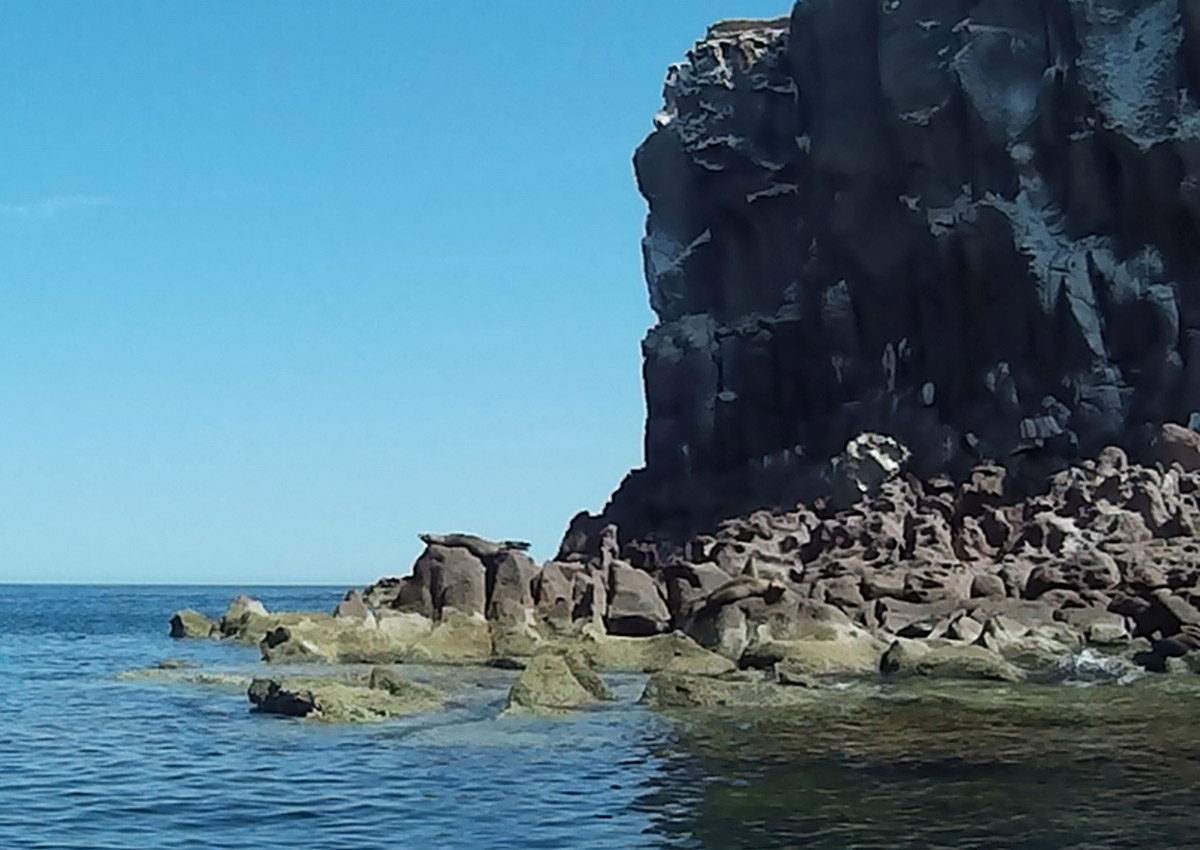 Sea lion sunning on the flat rock to the left of center.

Although I played around with the camera while in Zihua, there was no better place to put it through the paces than a day trip to Isla Espíritu Santo.  Home to dozens of bird and wildlife species, this island is protected as a part of UNESCO Biosphere Reserve.  Only a 45 minute boat ride away from the waterfront in La Paz, a visit to what Jacques Cousteau called “The world’s aquarium” is a worthwhile entry on any bucket list. 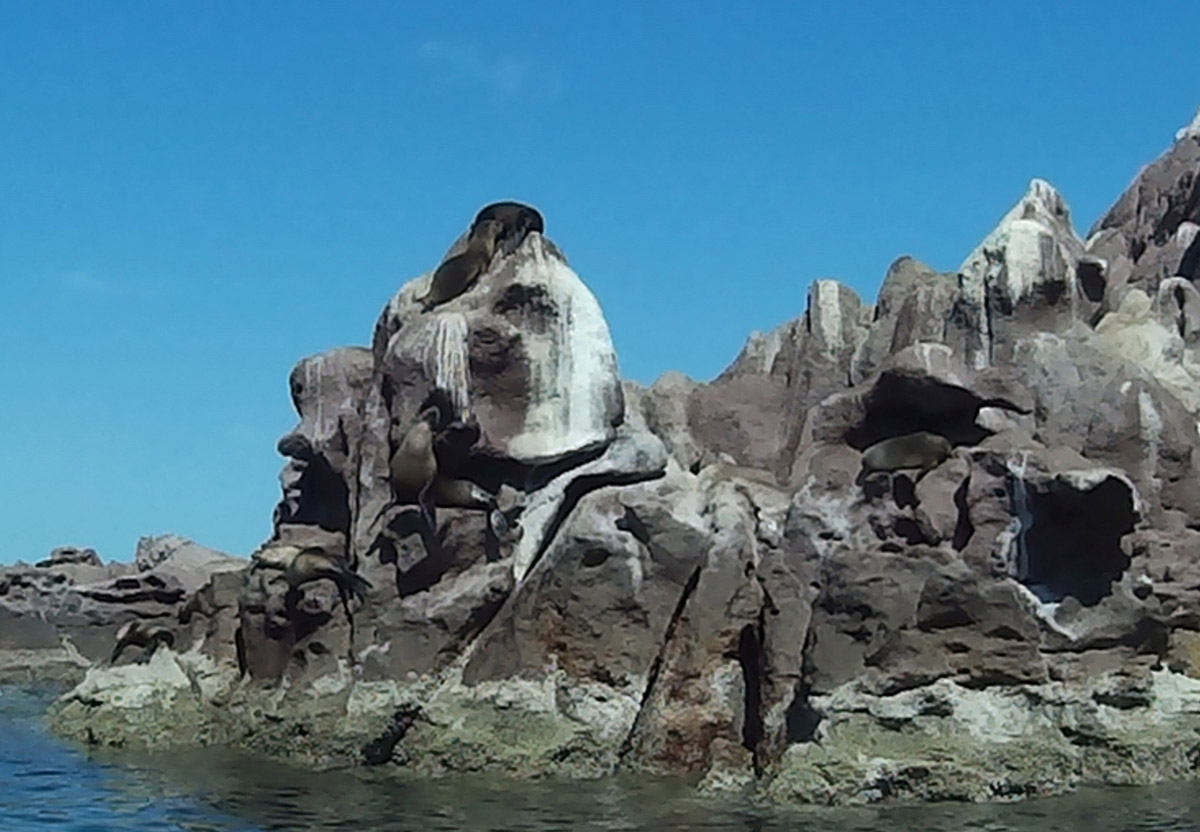 I tried zooming in on this picture, but it gets grainy fast. Pity, as it is a photo of a mother sea lion and her nursing pup on top of the white-streaked rock. 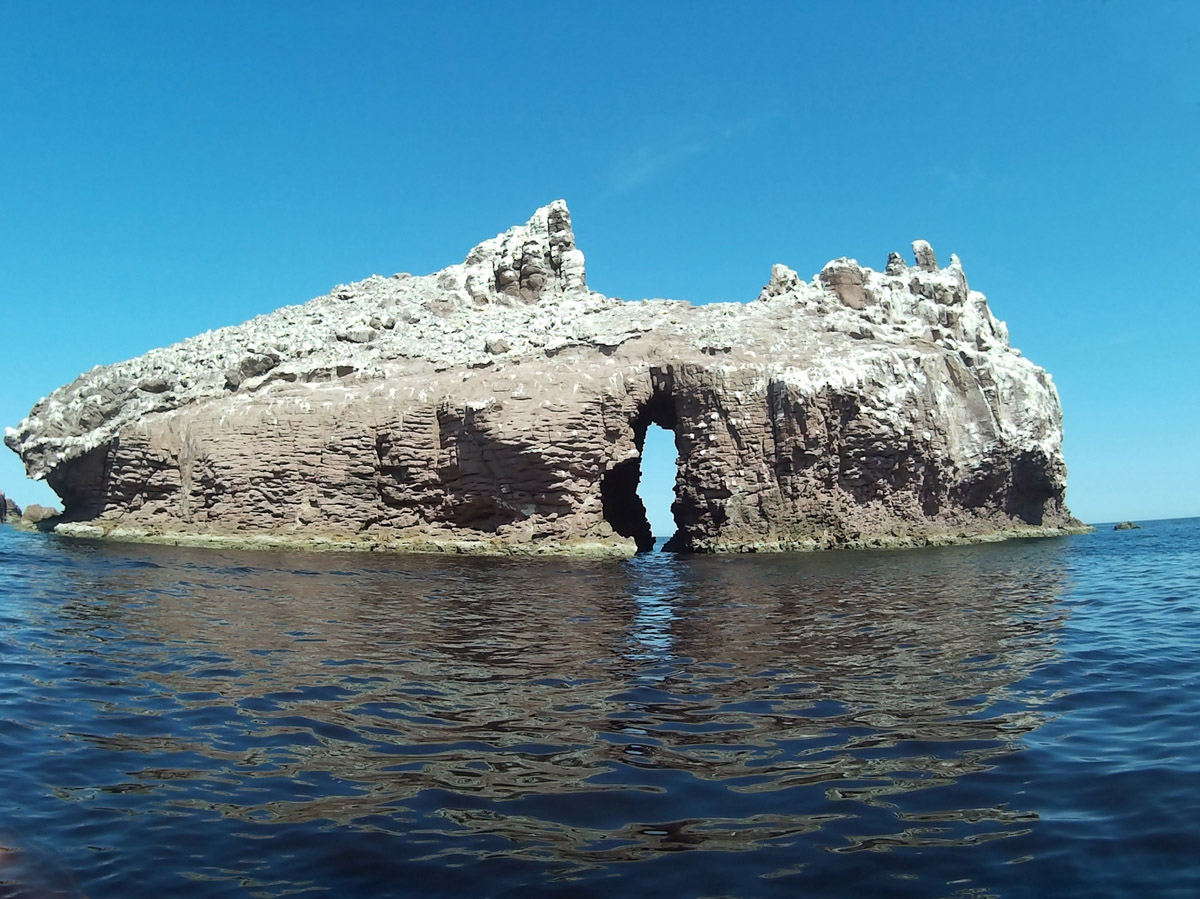 If you are a follower of this blog, you might recall I took this trip last year to Isla Espiritu Santo to snorkel with sea lions.  This year, I had an even better opportunity to tag along with a local tour group joining  Espiritu Tours for a “combo trip.”  We would be snorkeling with sea lions in the morning, stopping for lunch on the pristine Ensenada Grande beach, and snorkeling with whale sharks in the afternoon.  I would have plenty of “models” to test out the new Action Cam!   And between the favorable exchange rate and my return customer discount, the price of the combo tour was less than last year, an unbelievable bargain of $65 for the entire day, including lunch and equipment rental! 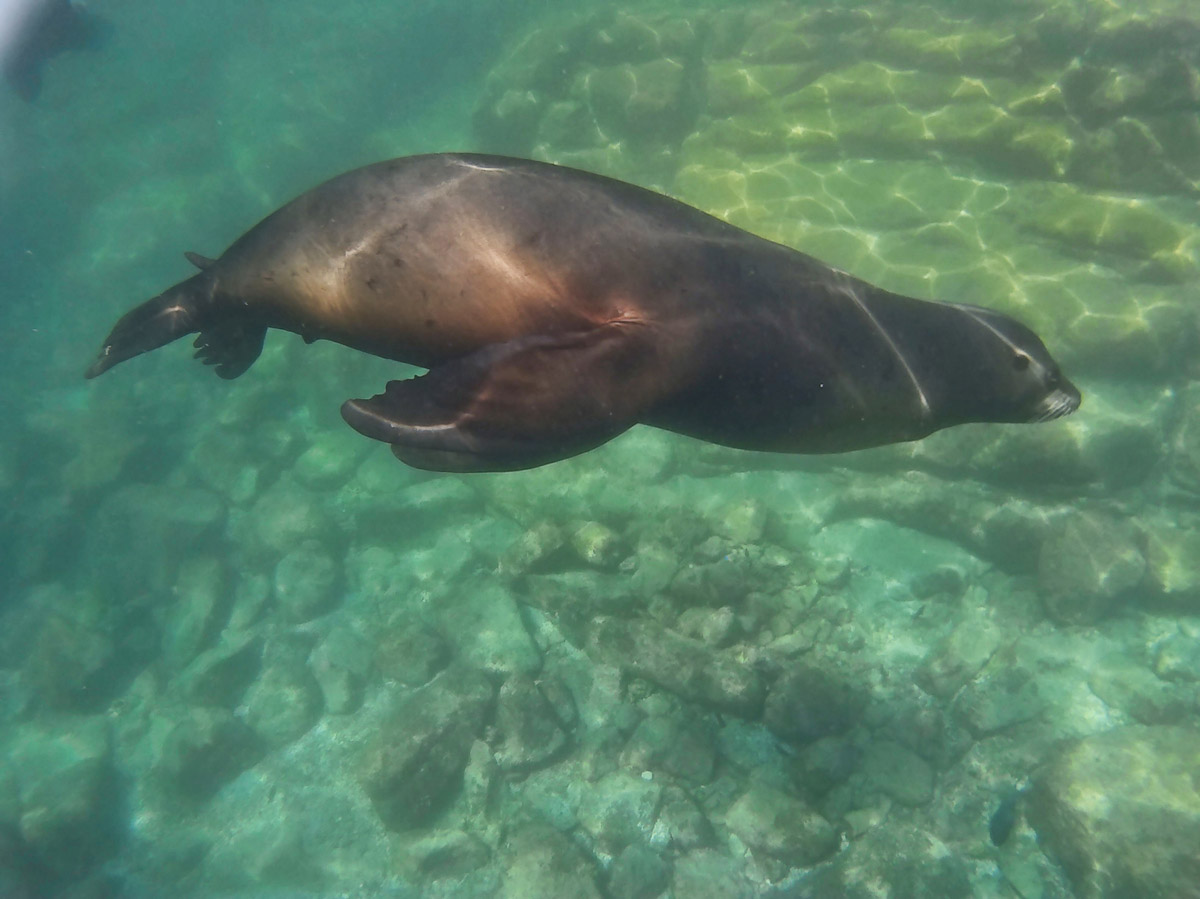 There are reported to be 300 sea lions at the Espiritu colony. 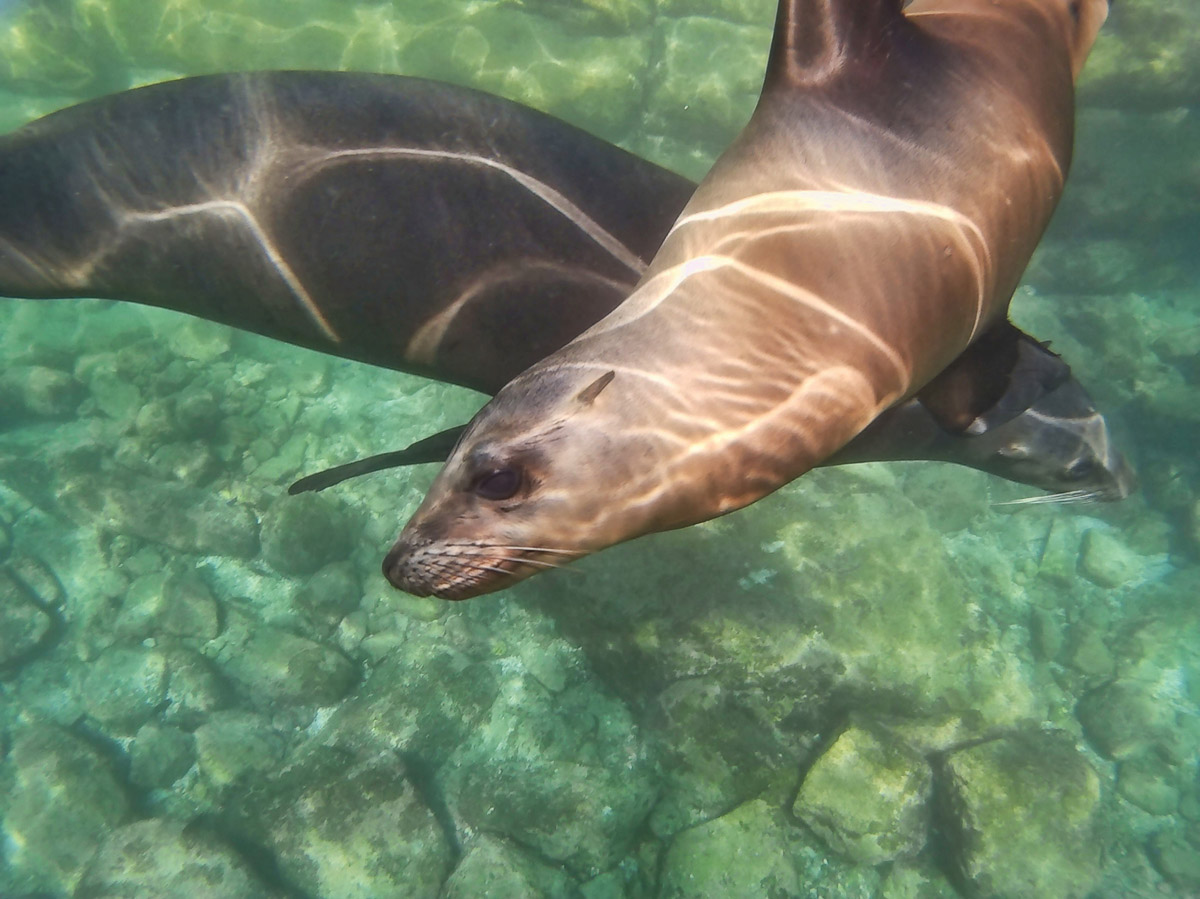 Most of the sea lions in this colony are juveniles. 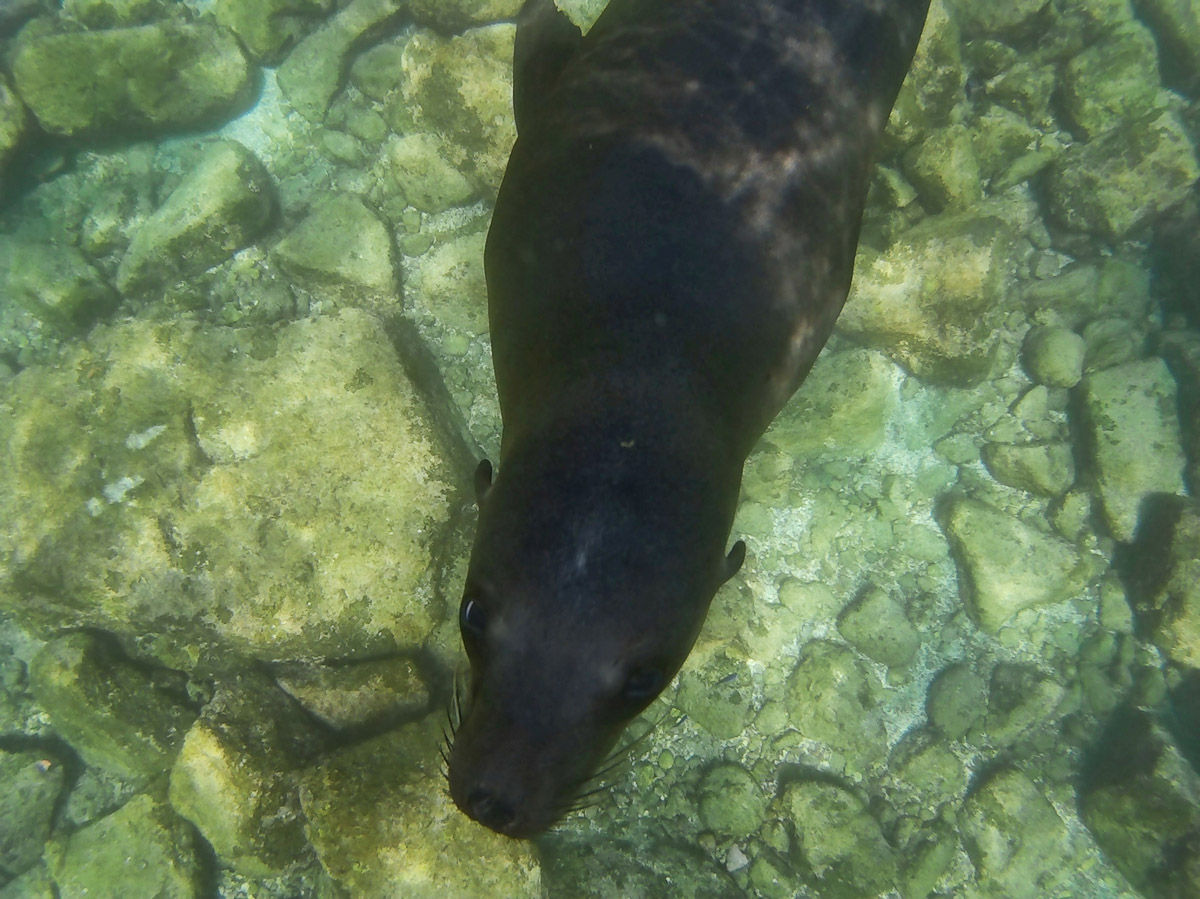 Sea lions are said to have the personality of a dog, and this one reminds me of my Mom’s dog Annie. 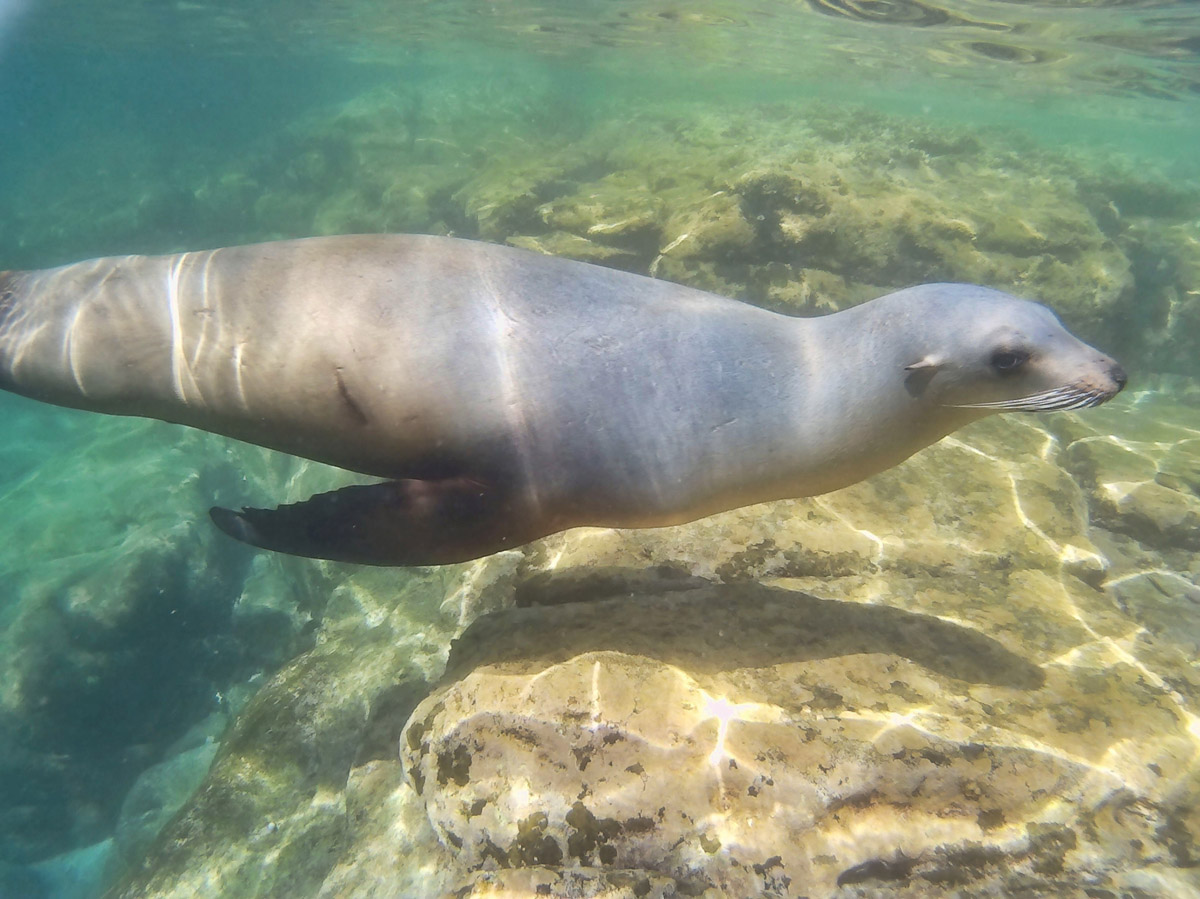 Sea lions can be distinguished from seals by their external ear flaps. 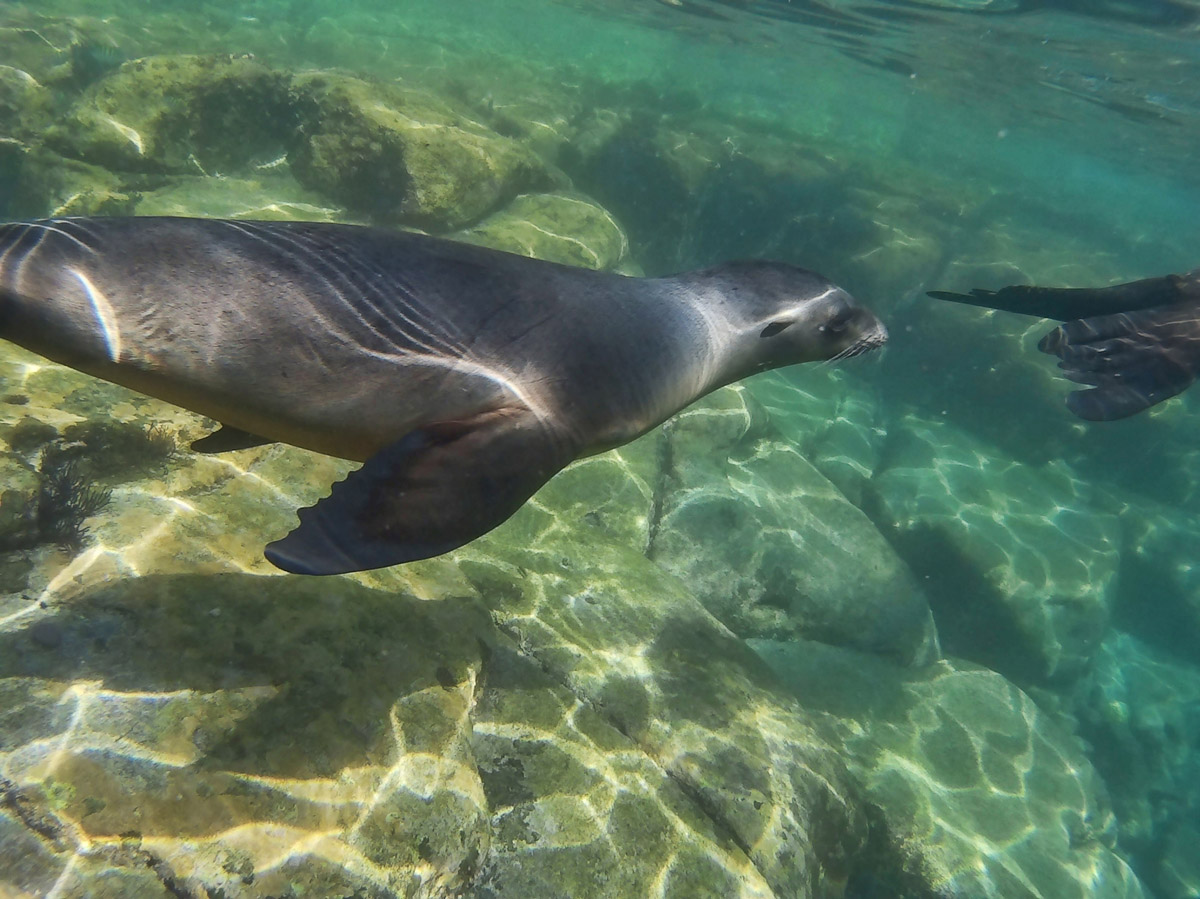 They use their front flippers to swim, whereas seals use their back flippers. 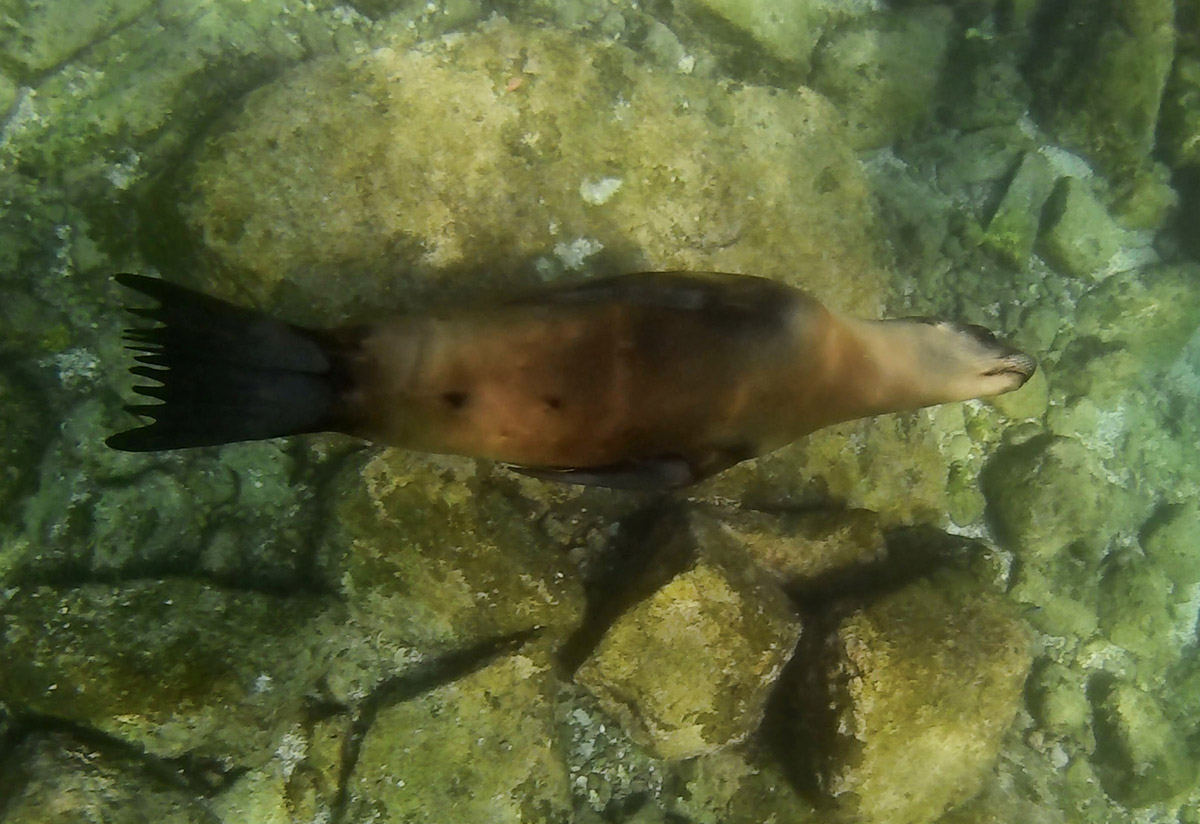 This one is doing the back stroke… 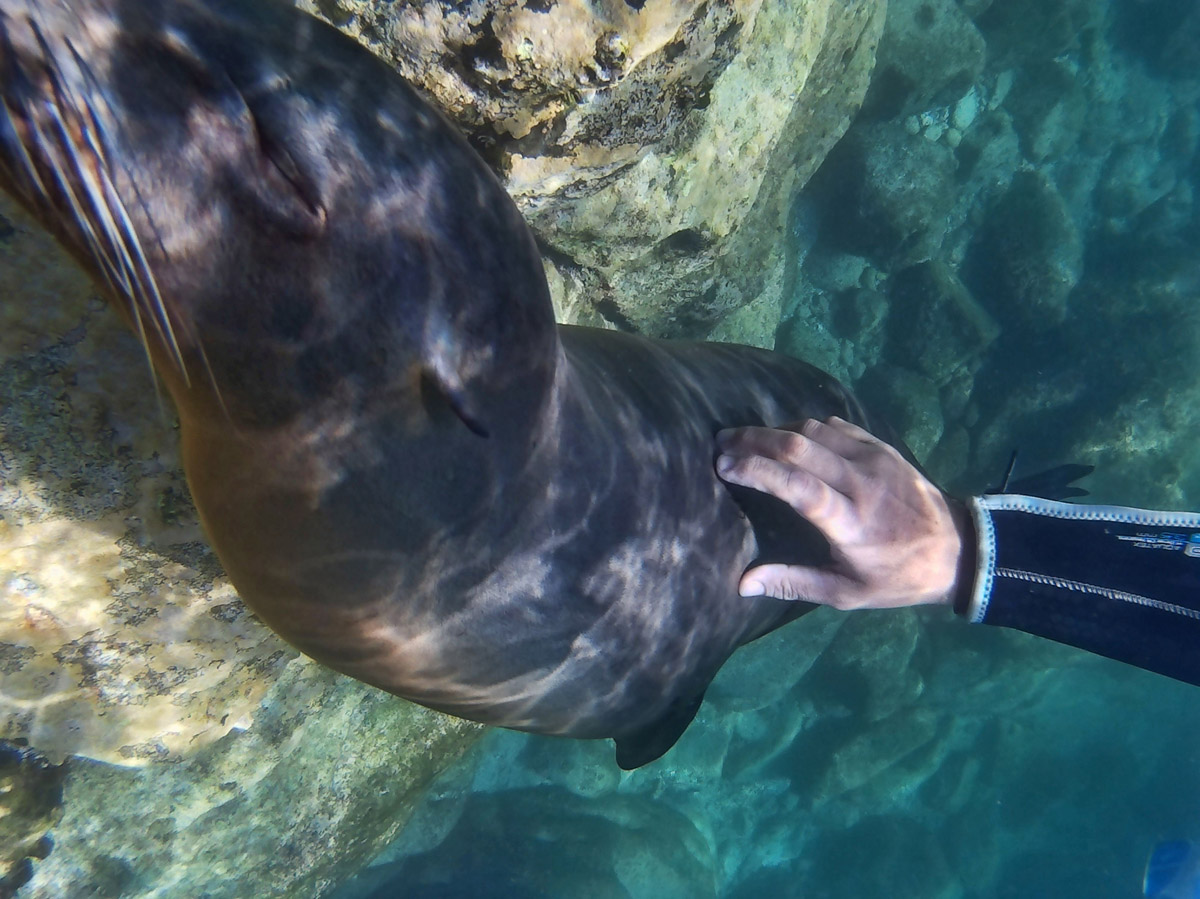 They are quite friendly…

After a drive by of the Blue Footed Boobie colony and the Frigate Colony, we arrived to our first snorkeling destination, Isla Espíritu Santo, location of a sea lion colony with over 300 inhabitants.  Reportedly, sea lions have similar personalities to dogs, which proved to be the case as they were much more playful this year than last, actually coming up to the camera to allow a little petting.  The SJCAM did a good job with color and clarity in the underwater stills. 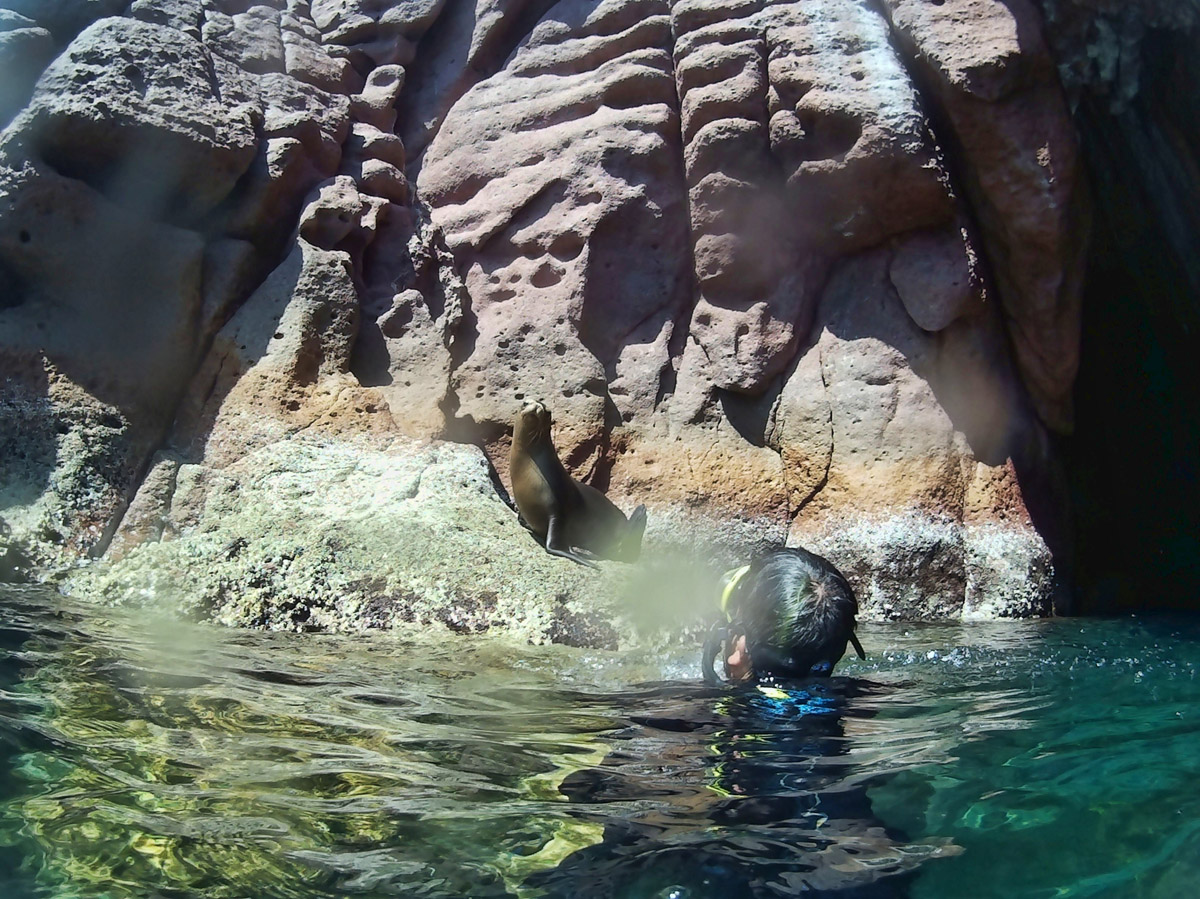 One thing you have to watch closely with this camera is the propensity for water to bead up on the cover, causing water spot distortions. 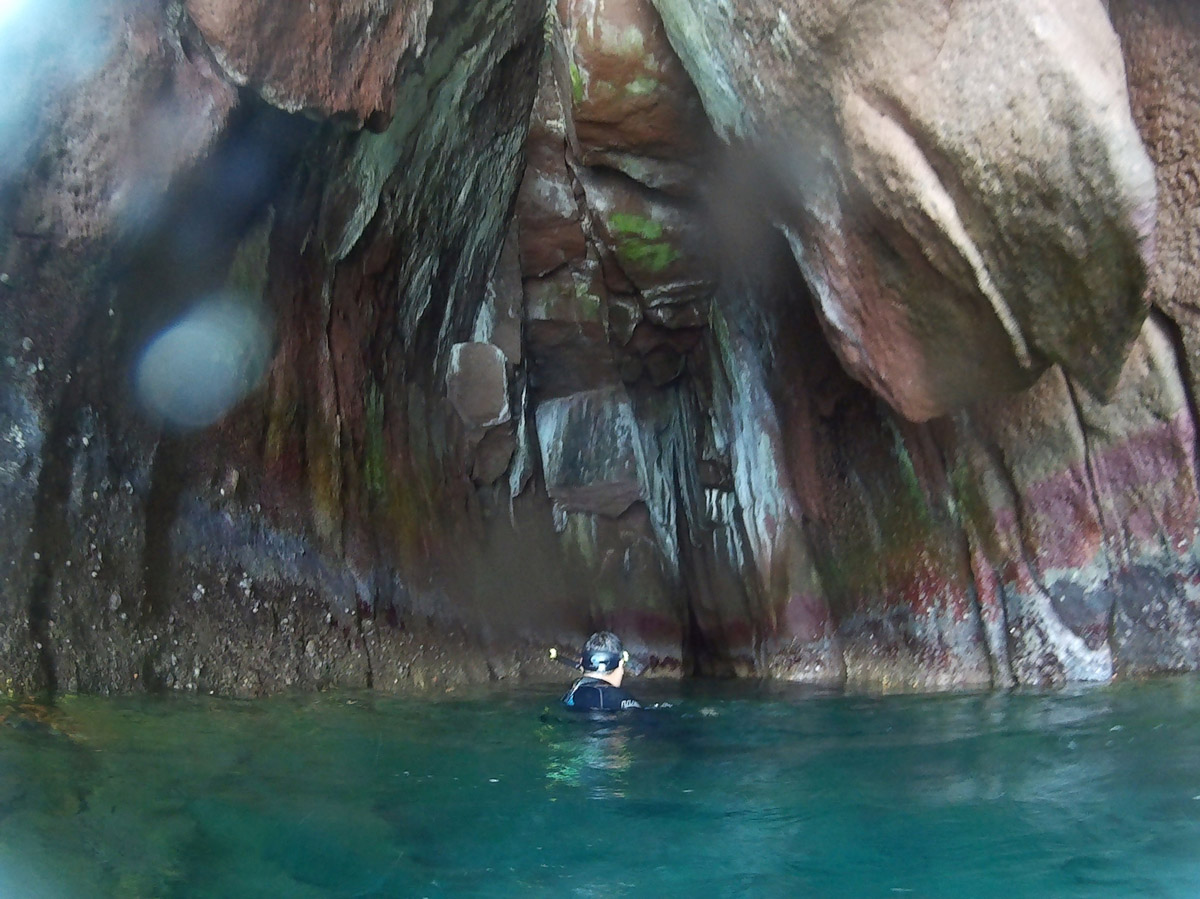 Inside this cave is a good example of how I would use a waterproof camera…in the water, but above the surface. This camera is not a great fit for this purpose. 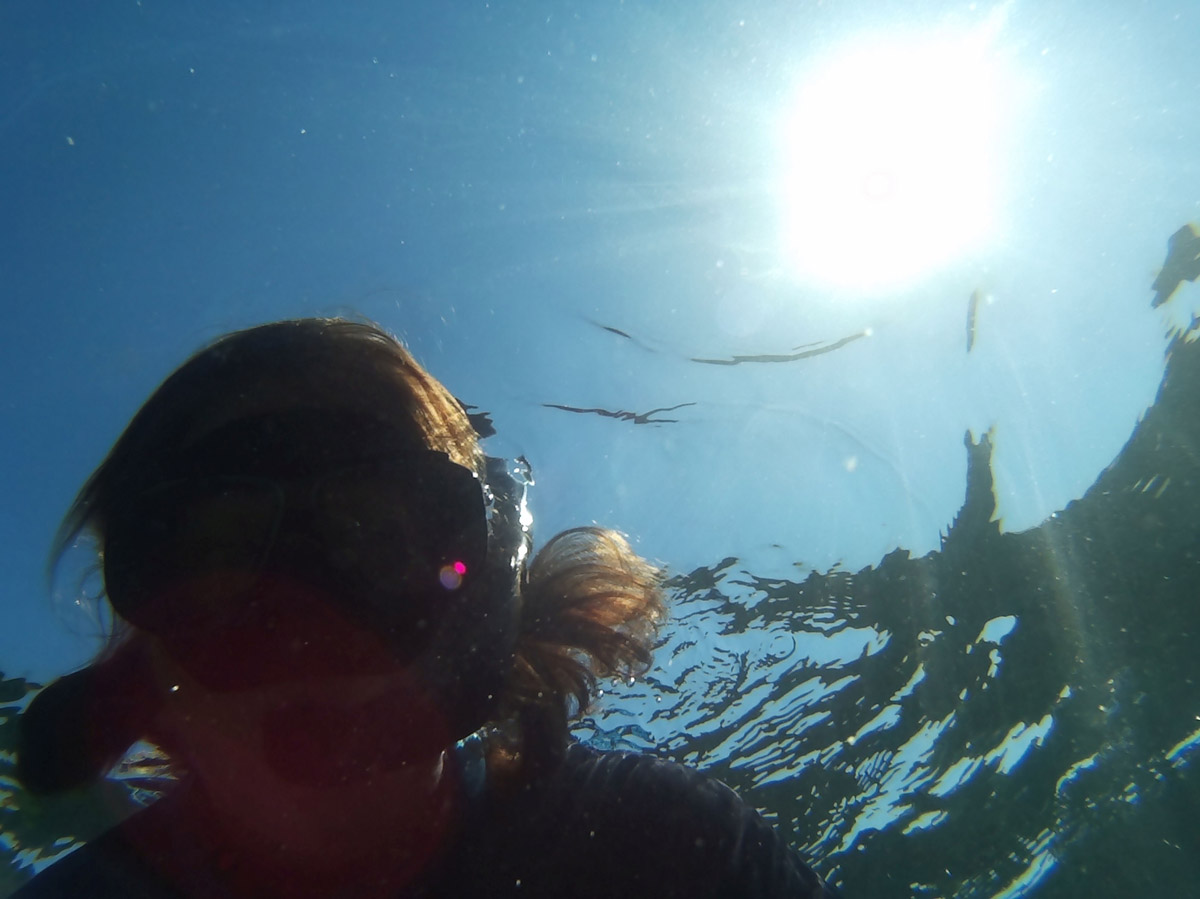 Any camera review has to include a “selfie” right? 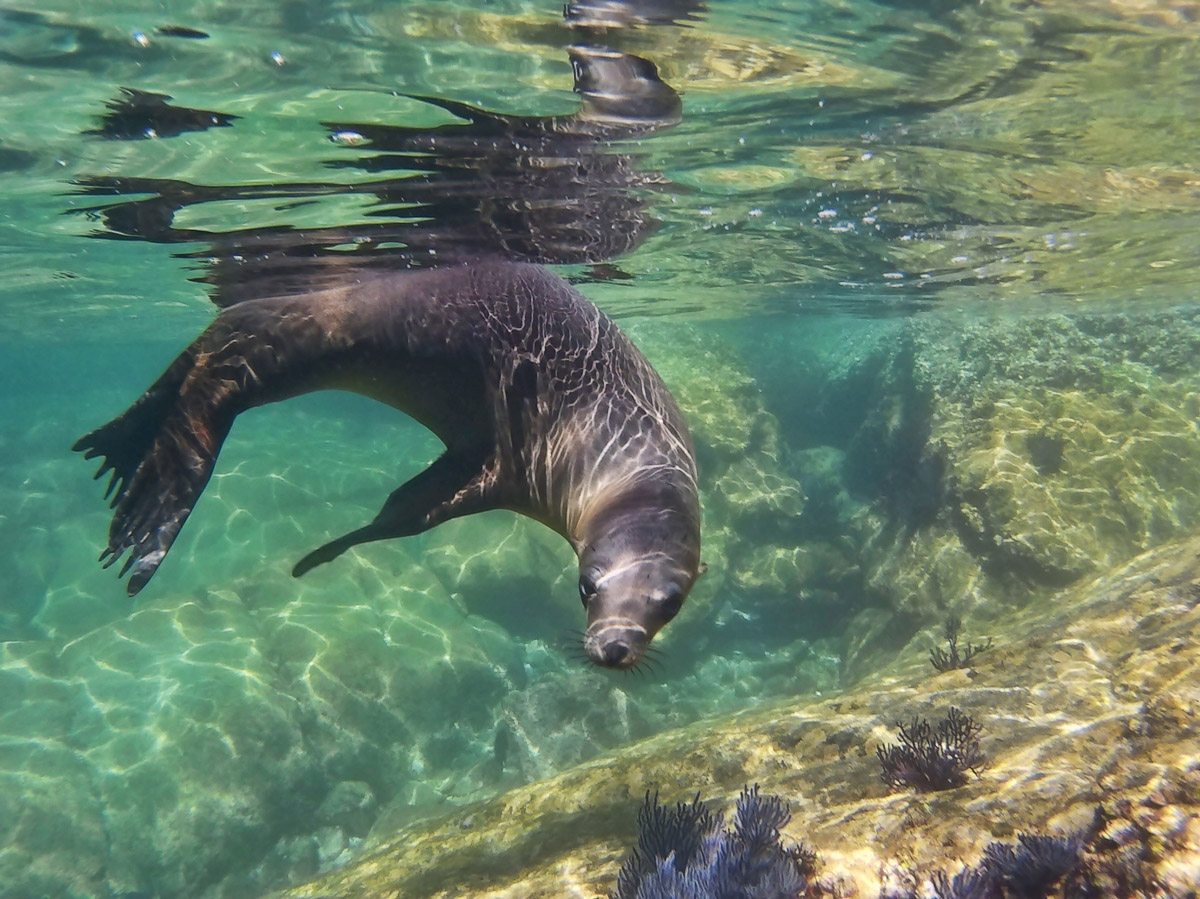 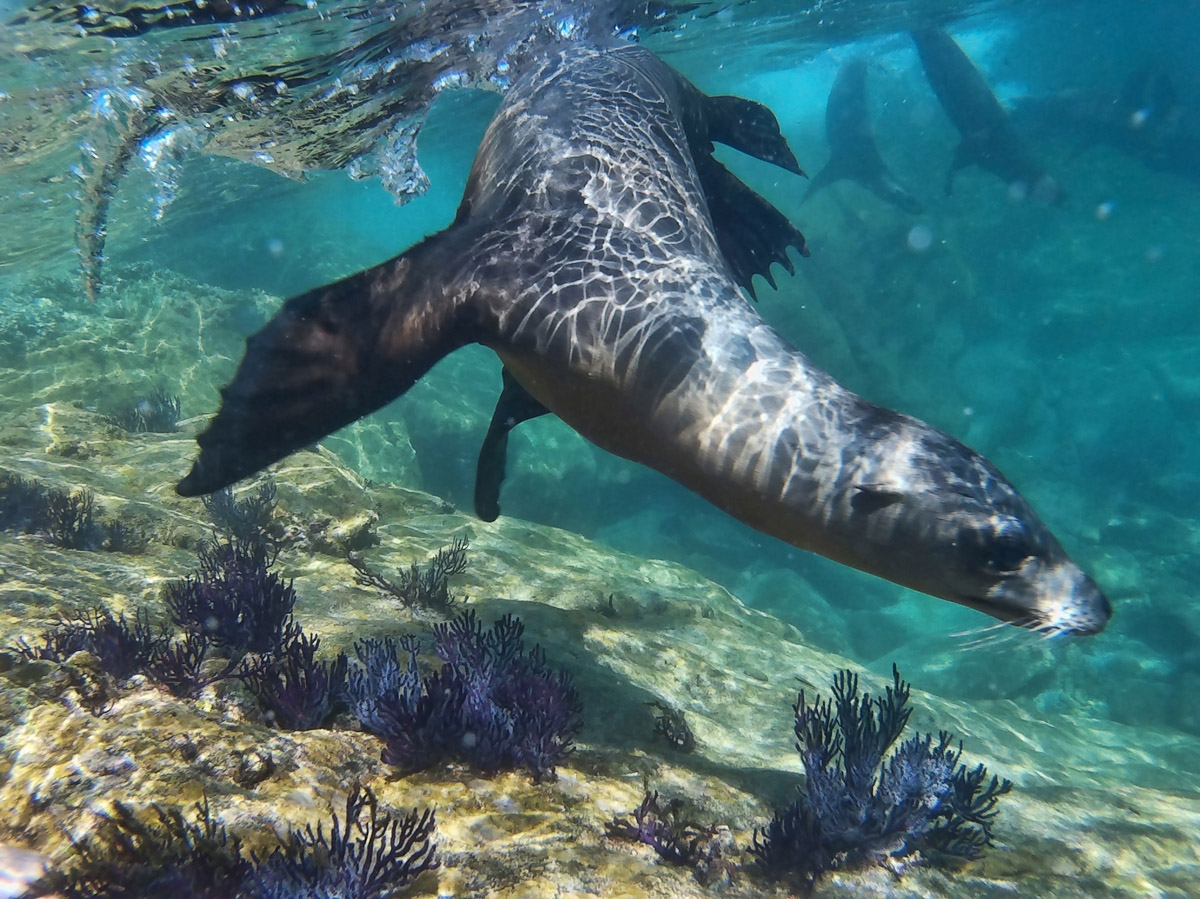 They are covered in a coat of coarse, thick fur.

I wish I had adequate words to describe what happened next.  On our way to the next stop, we came across a large disturbance on the surface of the calm sea.  The water was literally churning…with dolphins.  These were “common dolphins,” not to be confused with the longer-beaked bottle nose dolphin.  We estimated there to be two to three hundred of them, all frolicking in this one area.  We sat in awe for a good long while marveling at their antics as they seemed so playful, racing beneath the boat, jumping, breaching, and even turning a few somersaults.   I have to say, this was one of the most amazing things I’ve seen yet! 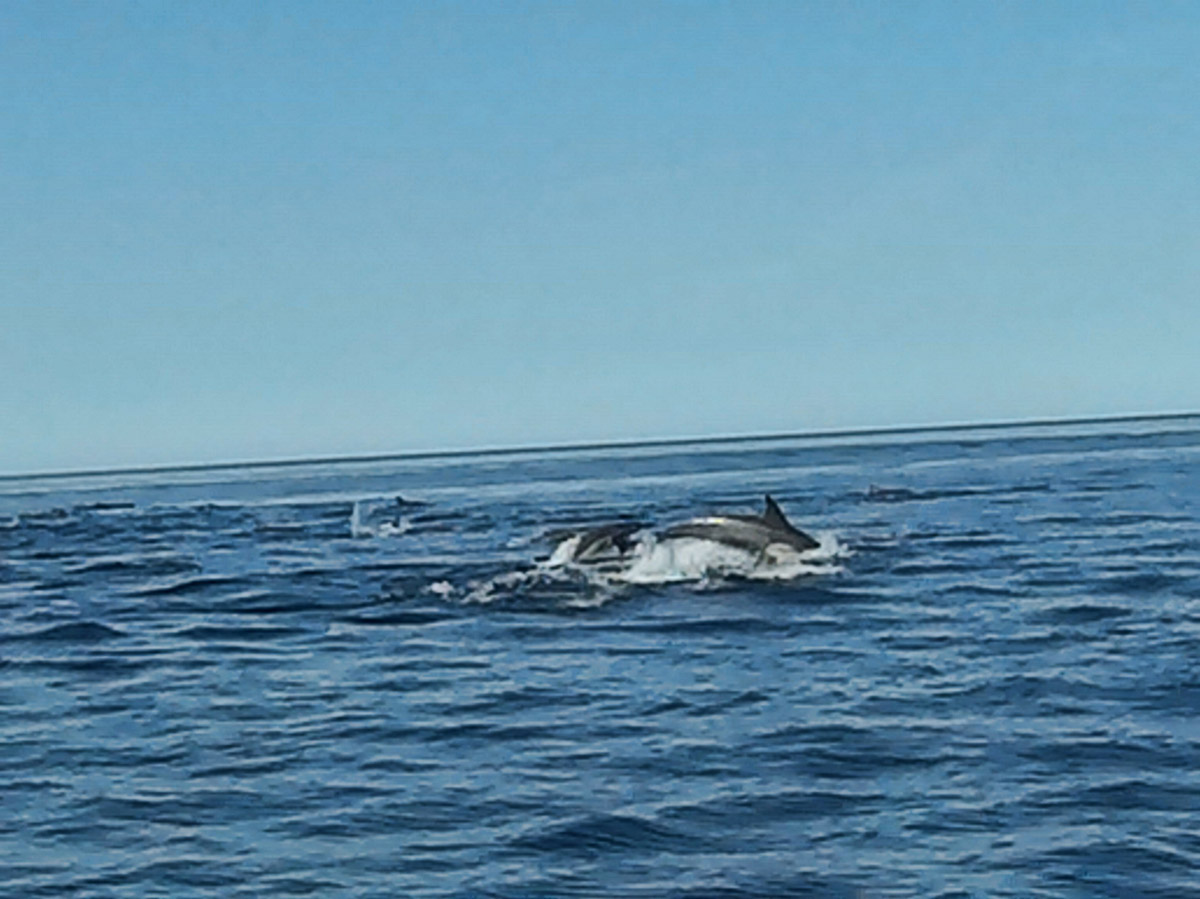 Above-water distance shots like this are where the camera really fails. We were not that far away, and this is not a “blow up” shot, yet it looks like I was trying to shoot the surface of the moon… 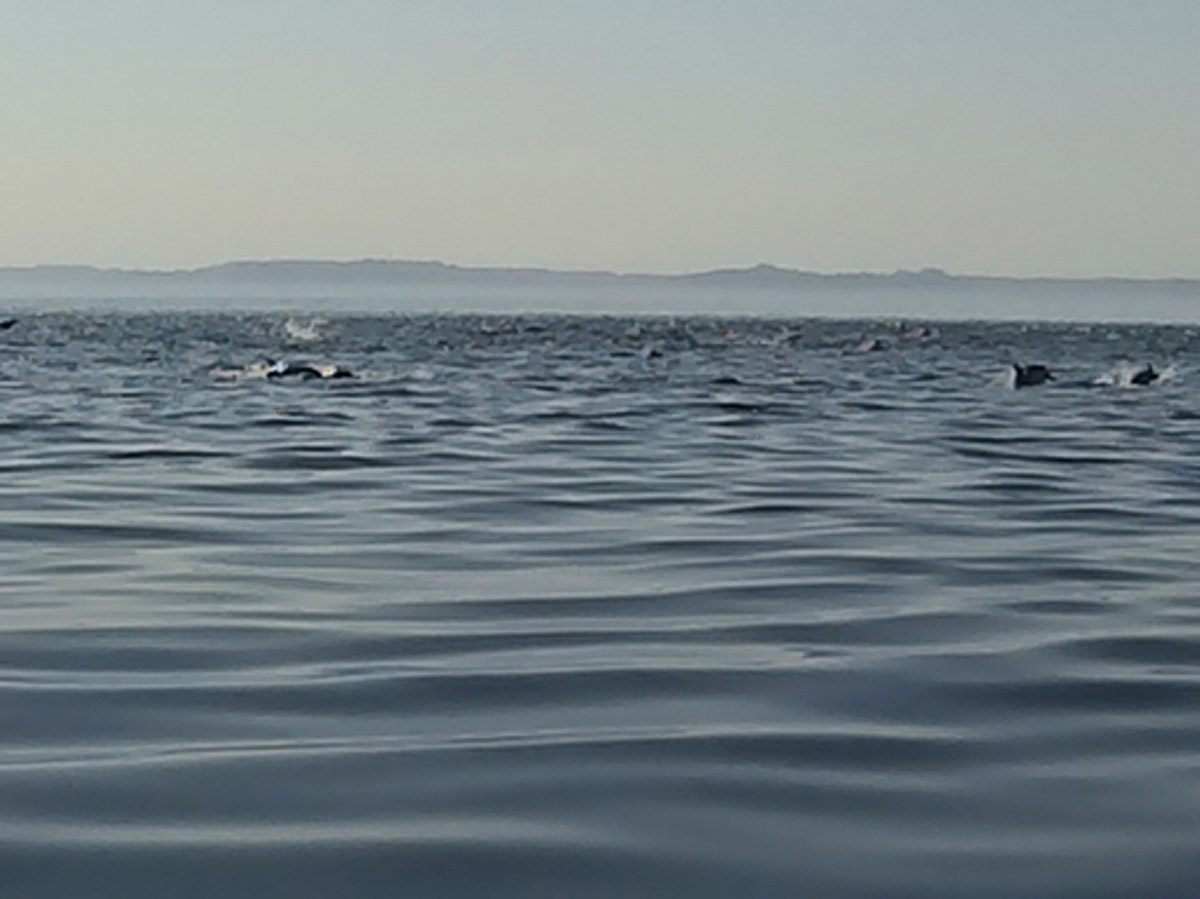 This is so sad to see a hundred dolphins playing on the water, and the camera does a terrible job…

Unfortunately, this is where the SJCAM really fell short.  The video above the water at a distance was abysmal.   I would say this was true for both stills and video.  It just is not a worthwhile camera above the surface, in my opinion.  Stills are grainy with poor color quality and distortion due to the wide angle lens. 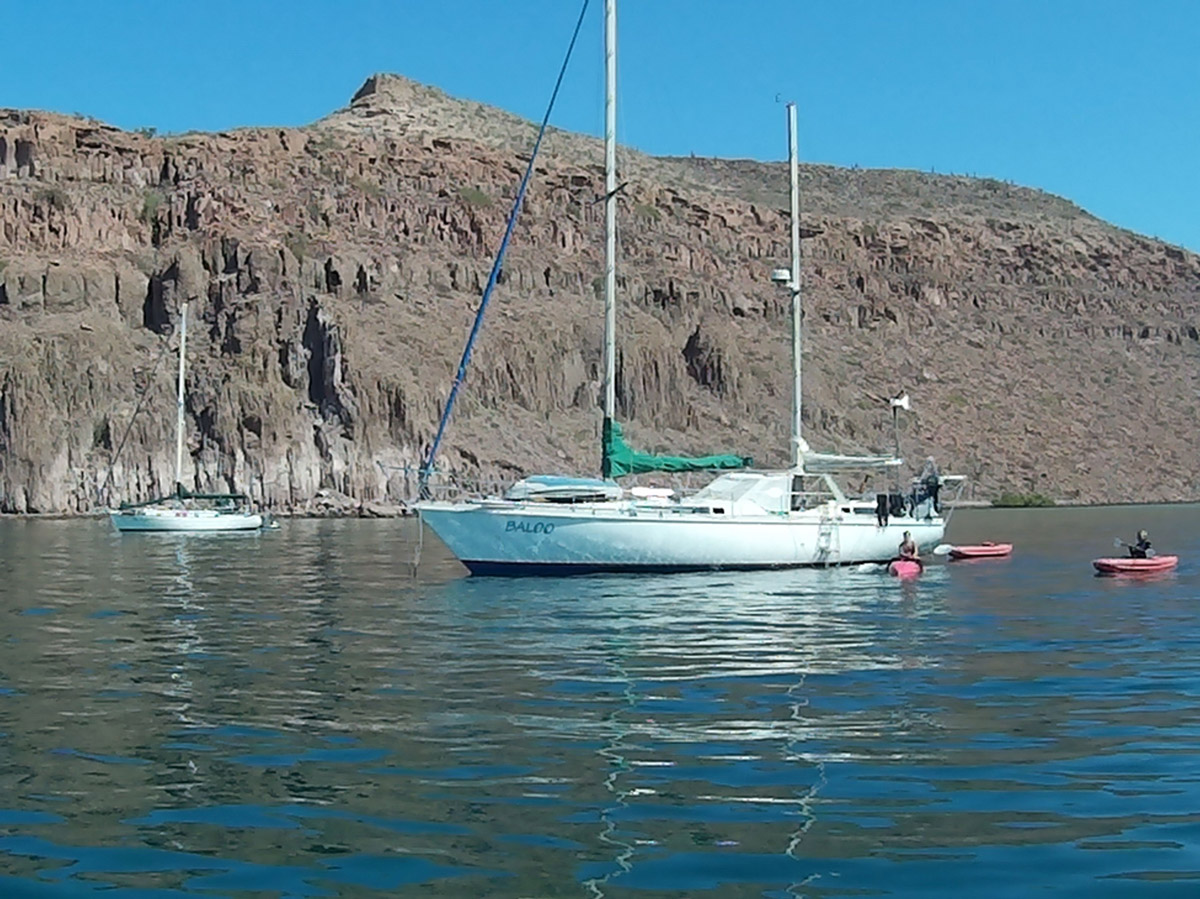 This shows how poorly the camera does with color. These kayaks are a bright red, but they look faded in the photo. 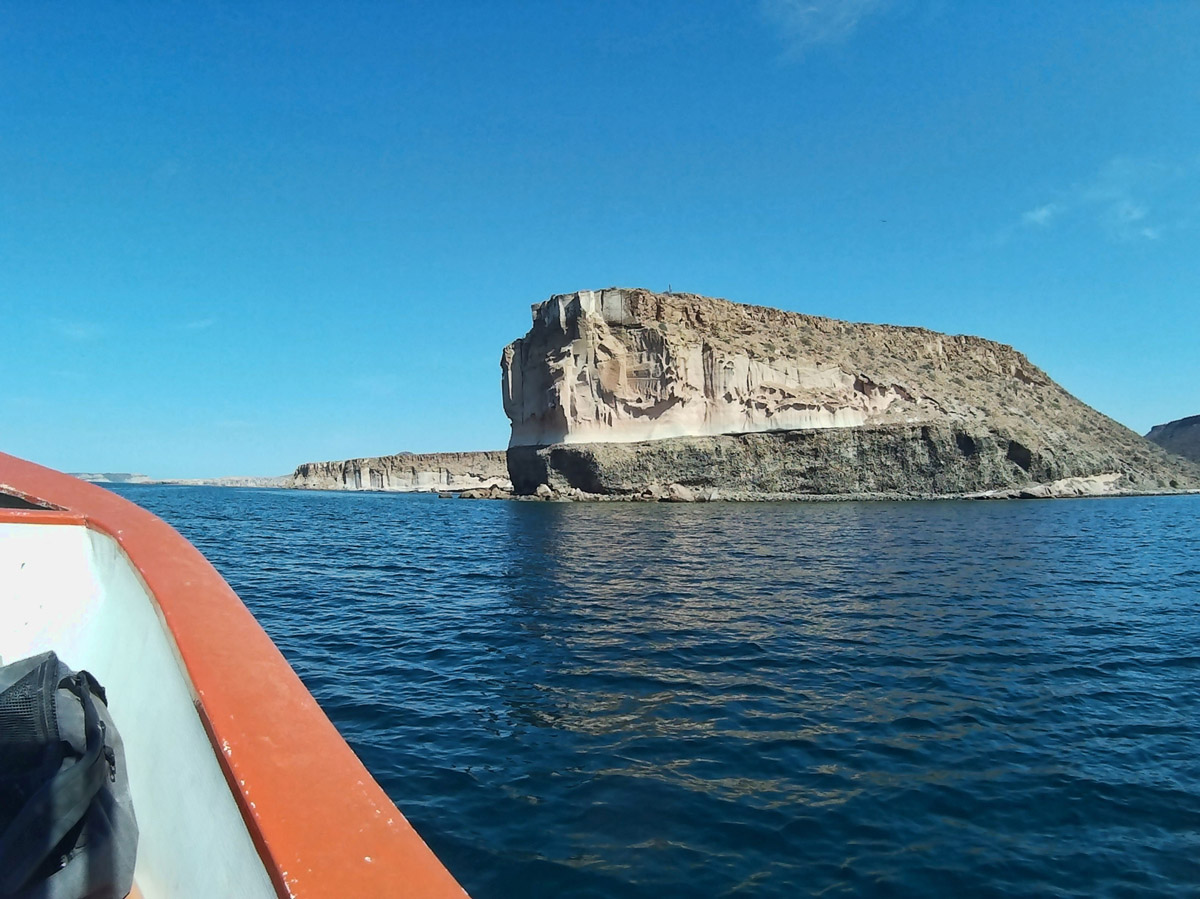 These rock formations are a beautiful coral color, but look washed out here. 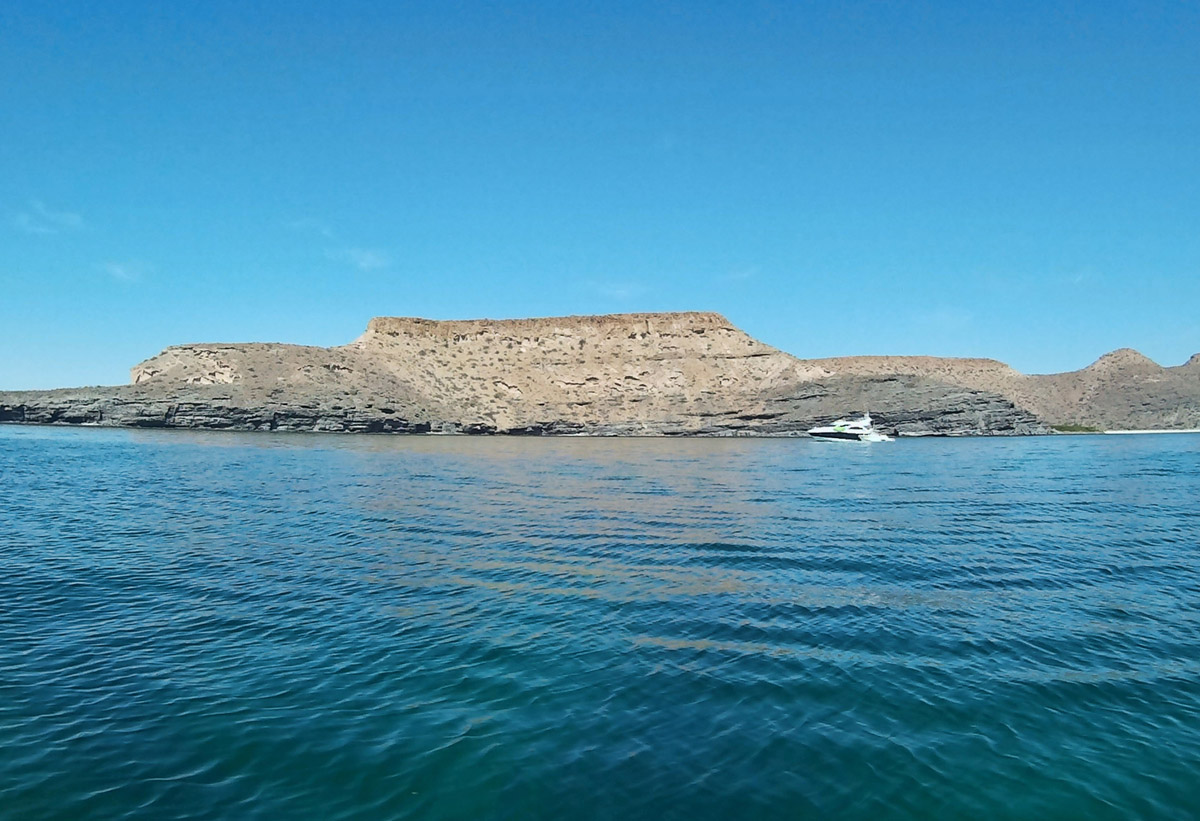 Distant shots look even further away with the wide angle lens.

After lunch of sandwiches and fresh ceviche on the Ensenada Grande beach, we moved closer to El Mogote, the peninsula in La Paz Bay, where a dozen whale sharks were feeding.   Attempts to snorkel with them proved to be much more physically exhausting than the sea lions, as these gentle giants moved around more, and therefore required getting in and out of the boat multiple times as we followed them.   Although the large-mouthed filter-feeders are known to be slow swimmers, one flick of the tail fin and they are too far gone to chase.

Unlike the sea lions, whom we were encouraged to “pet,” we were told not to touch the whale sharks, as they are feeding, whereas the sea lions are playing.  In addition, our skin can remove protective coating that they need to survive.   However, apparently no one told the whale sharks not to touch us, as one bumped my leg while I was waiting on my turn to board the boat.  It scared me so badly, I almost didn’t need the ladder to get back into the boat! 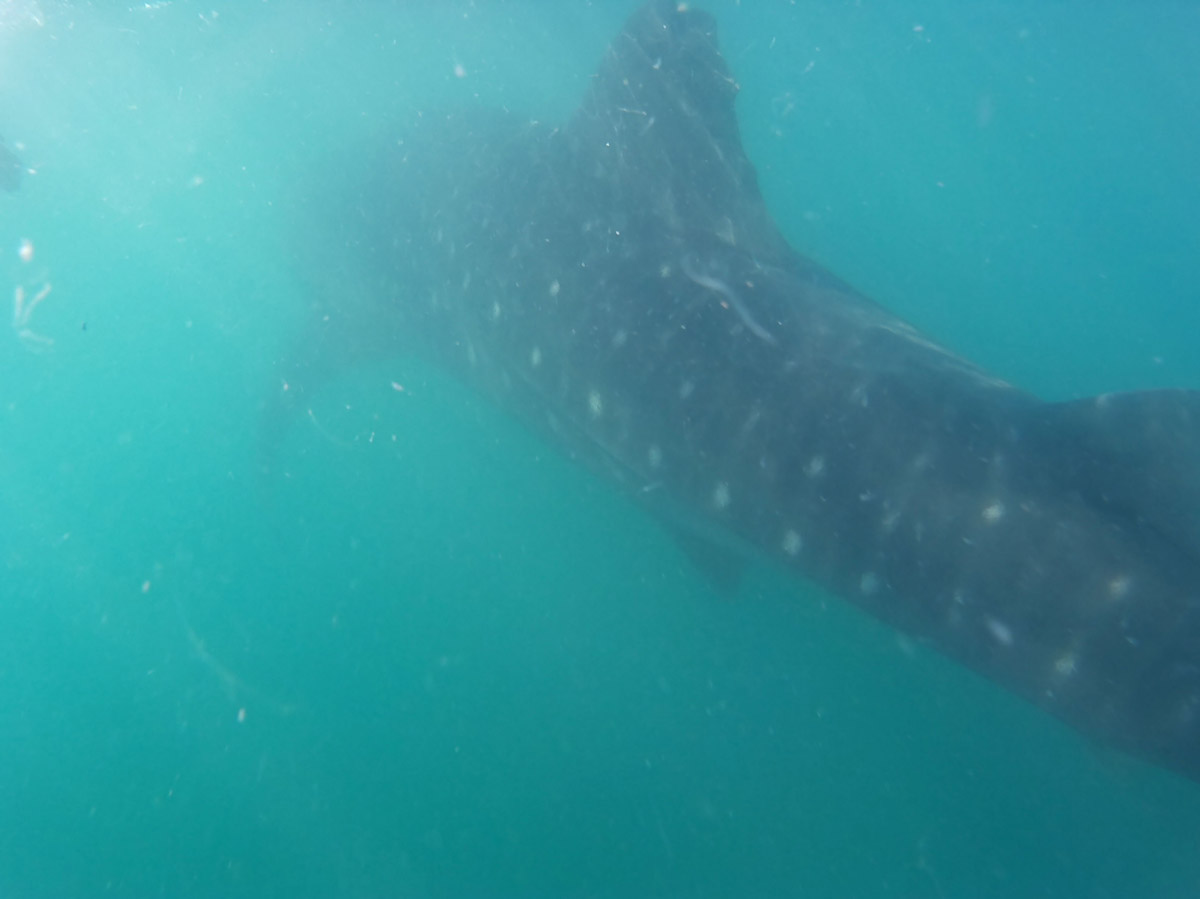 Now back underwater, the camera does better…especially considering that this guy was a bit far… 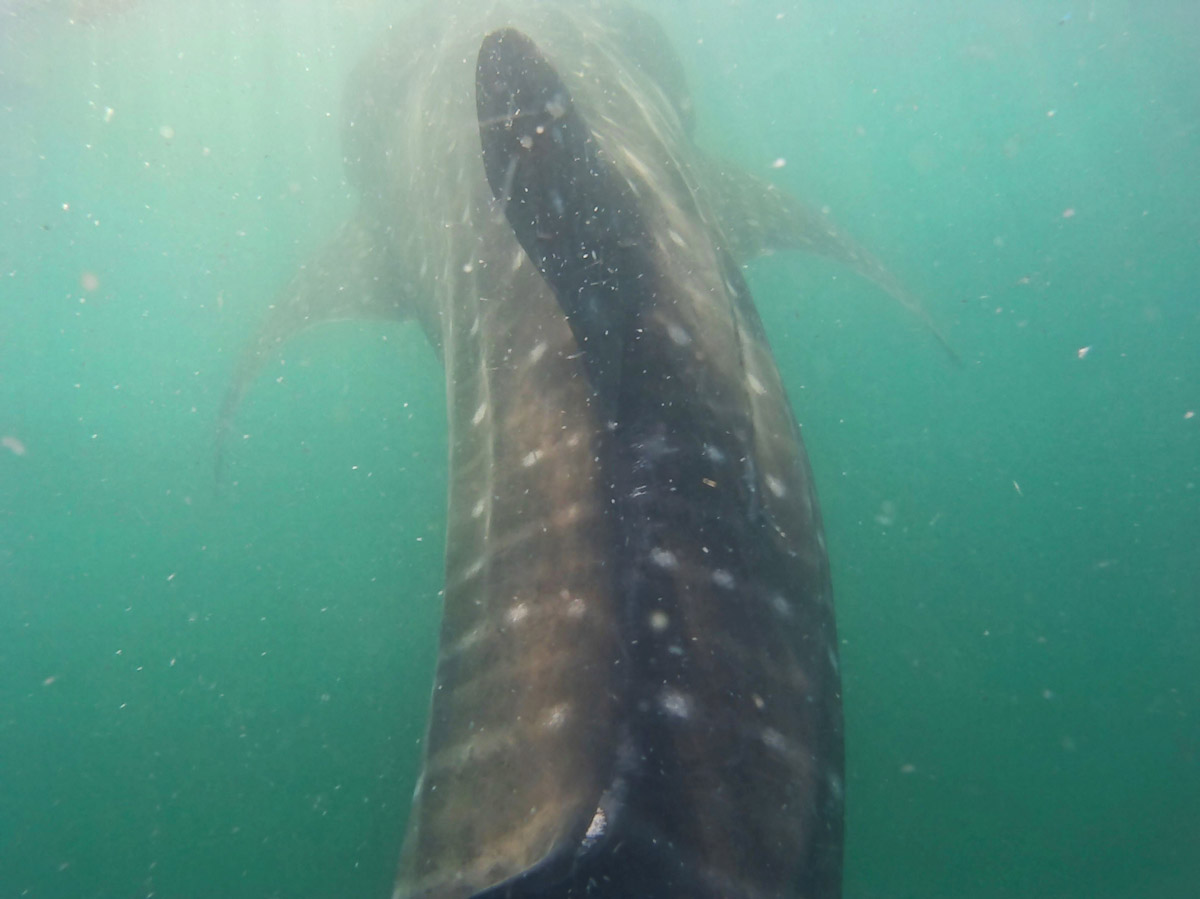 Whale sharks are plankton-eating filter-feeders, and pose no threat to the swimmer. 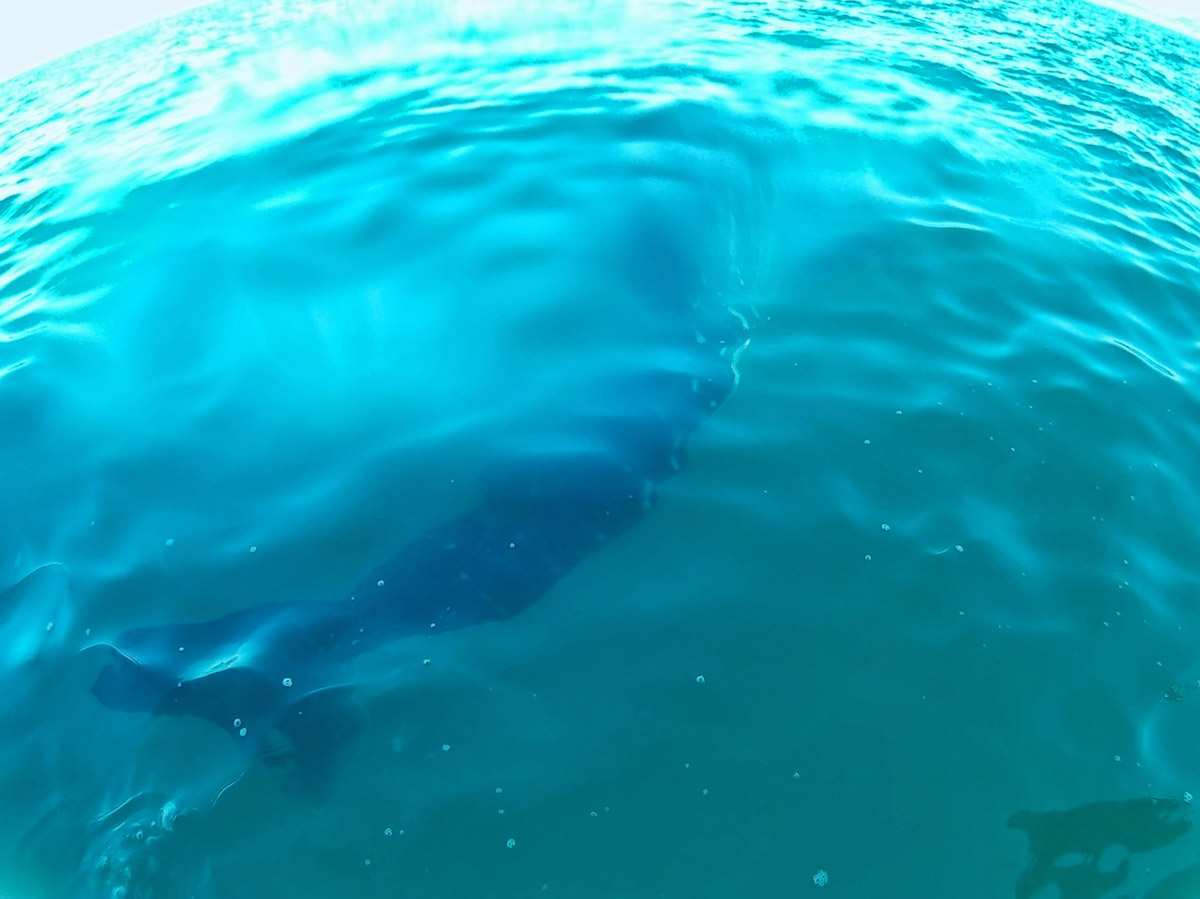 We are following a group of 6-8 here, but difficult to photograph.

As for the camera, well, I have to say I am a bit disappointed.   It takes great underwater video and stills, but that’s about all I can say for it.  I’m not looking for an “underwater” camera….I’m looking for a “waterproof” camera.  I want something that I can comfortably take out in a kayak, hiking beneath a waterfall, or hanging out at the beach without worrying about ruining “the good camera.”  Sadly, due to the strange distortion and poor quality in distance photography, this isn’t it.   Will I keep it, or sell it on ebay?   Yet to be determined…

For those of you who might be interested in the video footage, here are a couple of rare videos on the TTTH blog.   My first (and probably last!) two videos on Youtube…

11 thoughts on “In Situ Camera Review”