As we continue our southerly loop around the Reserva de la Biosfera Sierra Gorda, we stop in the Pueblo Magico, or “Magic Town” of Xilitla.   I have written about Mexico’s Magic Town campaign before, whereby towns are chosen by the Department of Tourism for their natural beauty, cultural riches, or historical relevance.  I make it my goal to see as many as I can, because each offers up some gem of interest or beauty usually worthy of an out of the way stop. 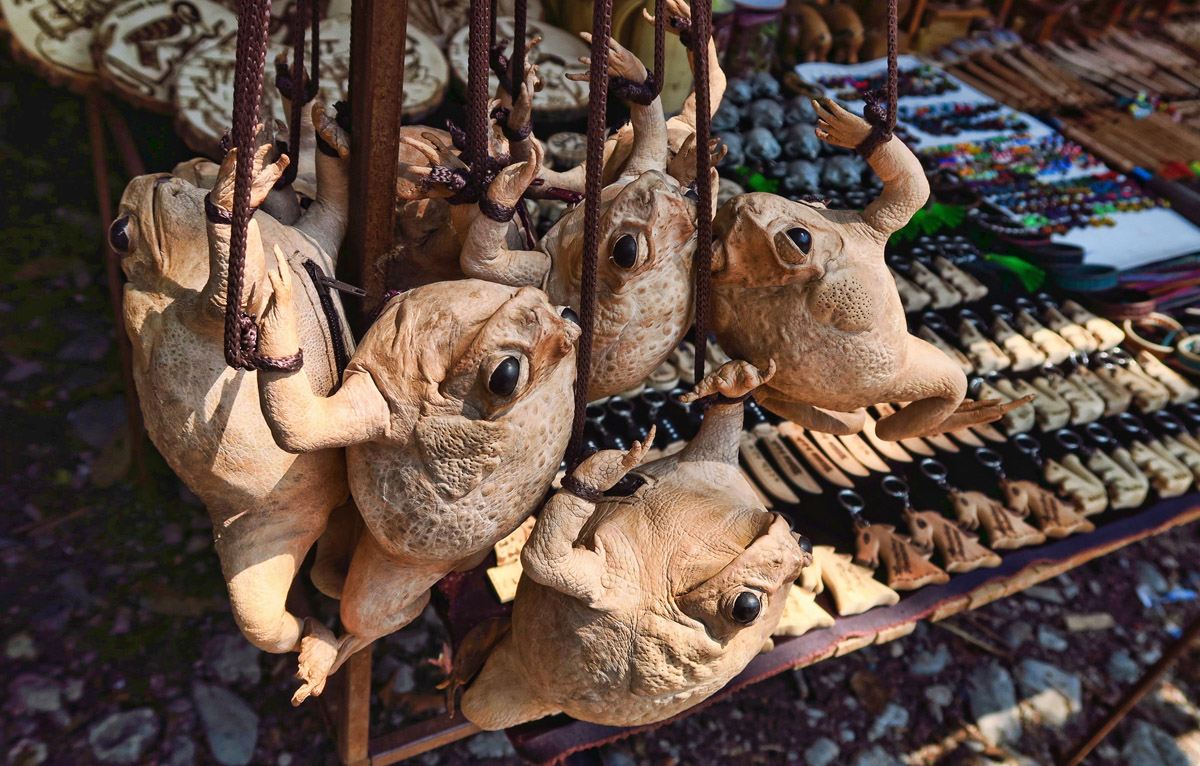 Vendors line the entrance to Las Pozos, selling all sorts of bizarre items. These are frog purses, complete with zipper closure up the gut. 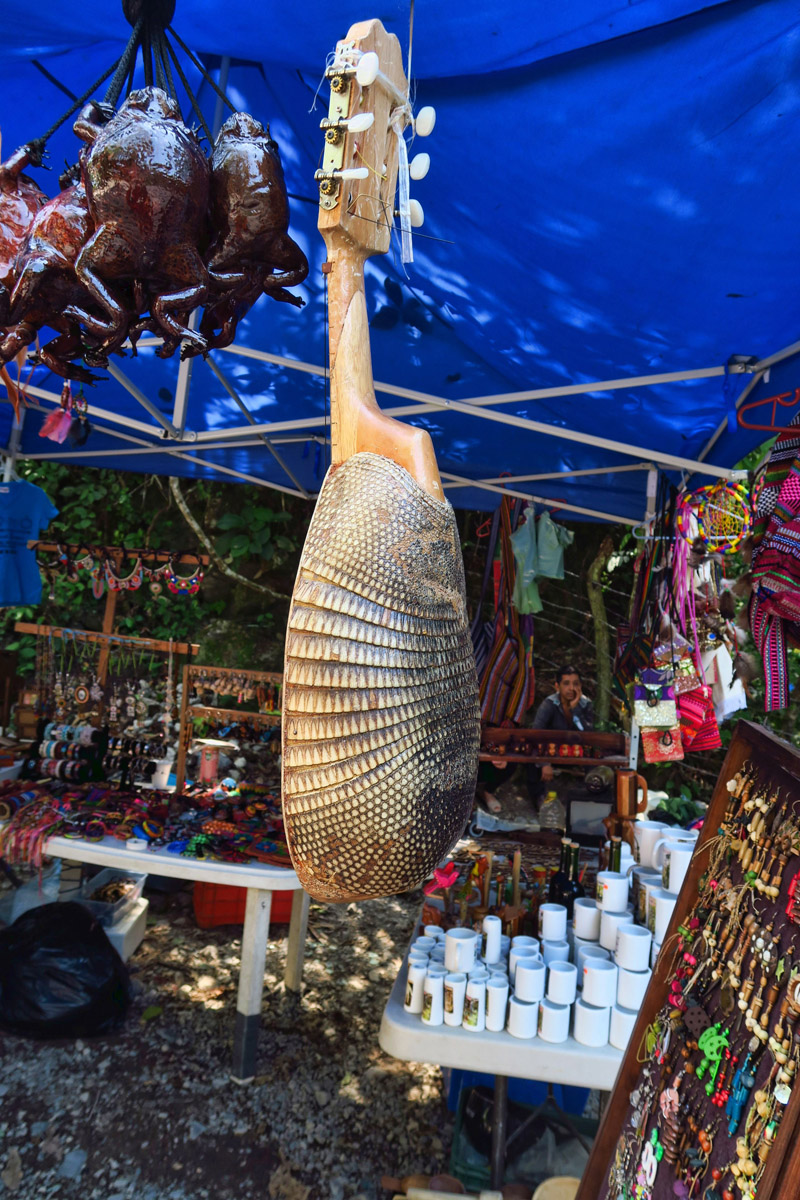 Here we have a small guitar made from an armadillo shell. 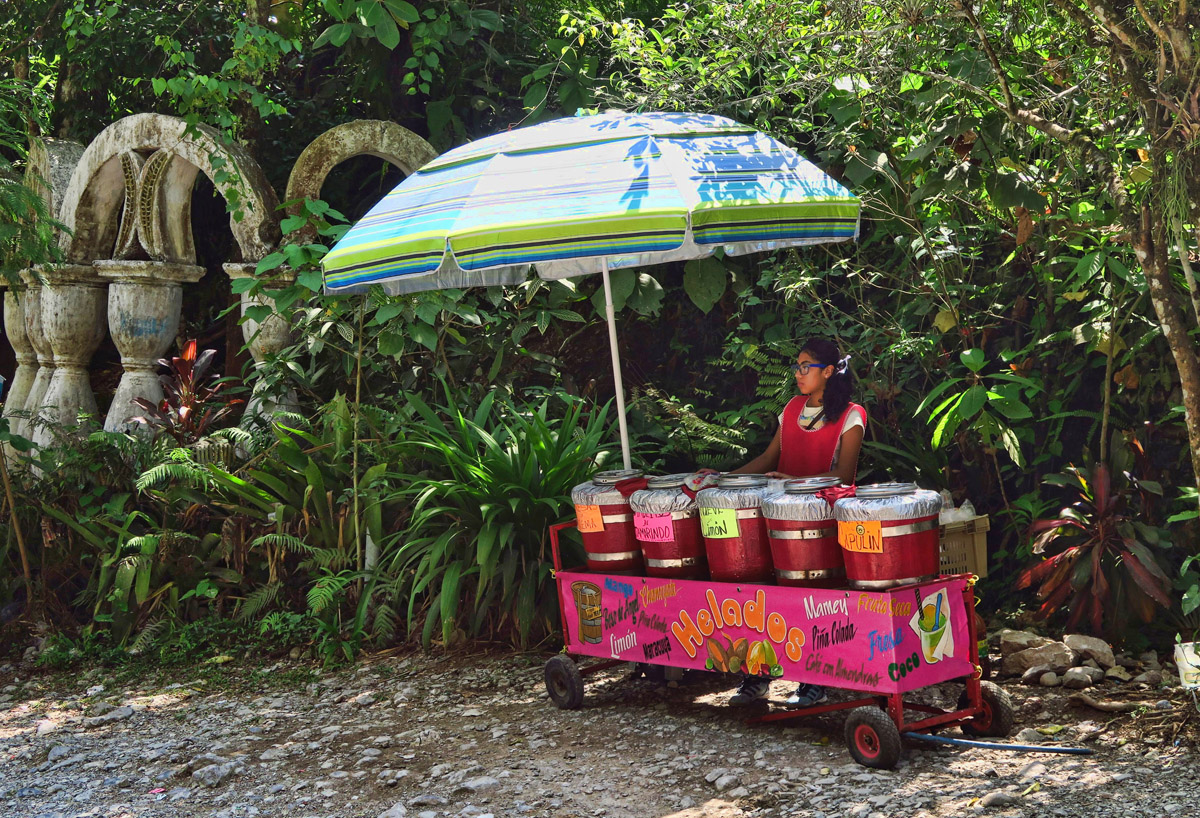 Xilitla received this designation primarily because of Las Pozos, or “The Pools,” a surrealist sculpture garden built alongside a large waterfall and spring-fed pools in the middle of the subtropical rain forest.  To paraphrase the SECTUR website which describes in Spanish this magic town, “There is no other place where nature and man are conjugated as harmoniously as Xilitla.” 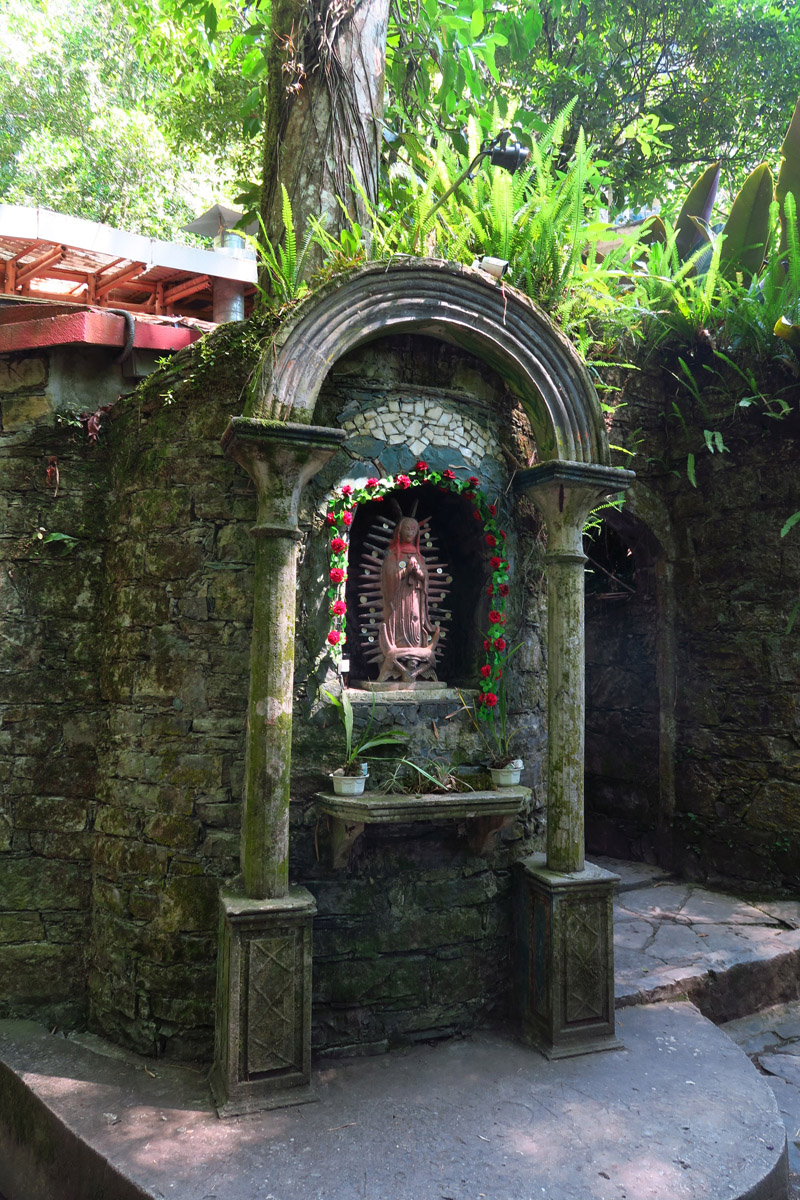 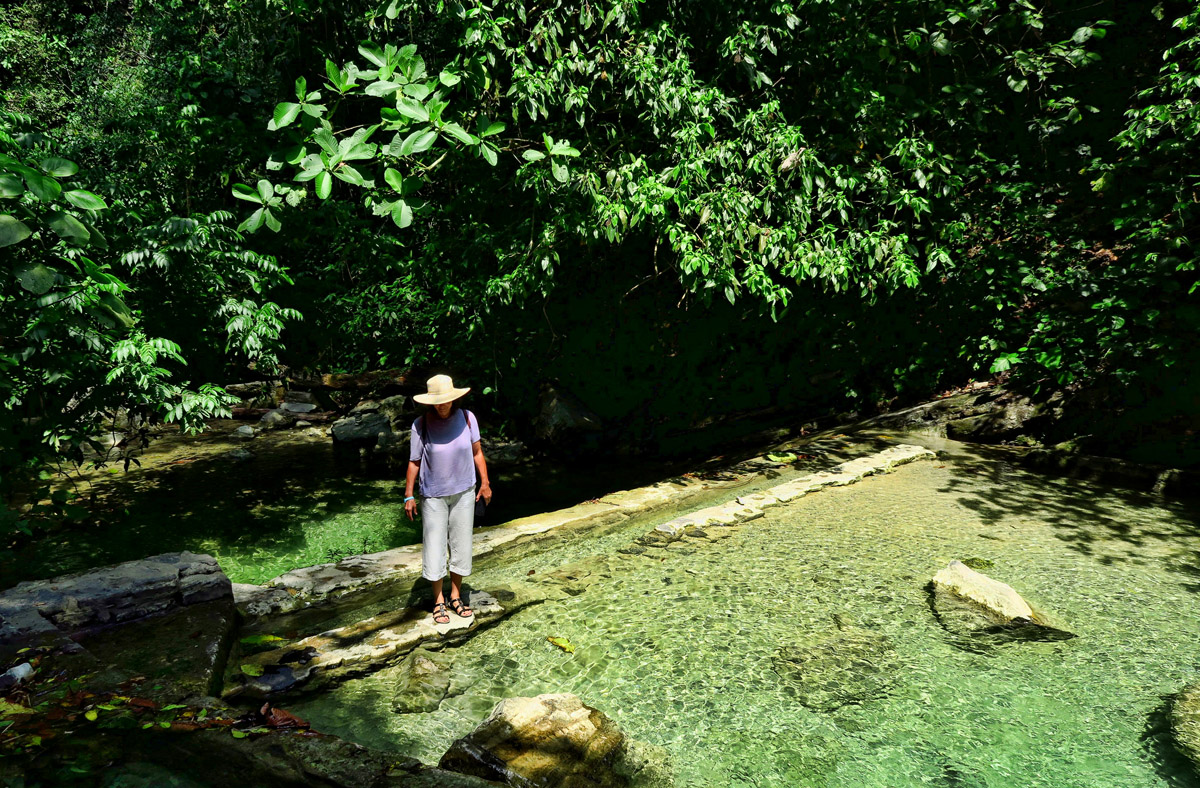 Vivian explores the pools, or cisterns that have collected from the cascading waterfalls. 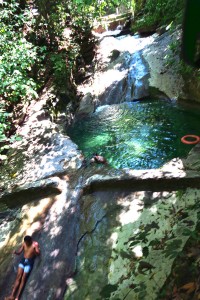 Note the guy in the lower left hand corner. He’s going down a giant chute that is worn in the rock.

This bizarre concrete jungle in the middle of the Sierra Gorda region is the creation of an exceedingly wealthy Scottish poet and patron of the surrealist art movement, Edward James.  The Scot visited the region back in the early 1940’s and was taken with the area as a vision of the Garden of Eden, with its lush green vegetation and natural pools connected by waterfalls.  As he was bathing in one of these pools, he was overcome by a swarm of butterflies (no doubt part of the Monarch migration) and took it as a sign that he was to make this area his home.  He planted a reported 29,000 orchids and built cages for exotic animals such as pythons, ocelots, and exotic birds. 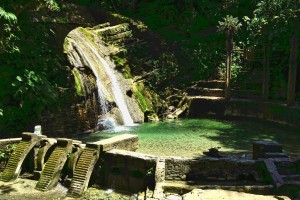 Water in the pools is cold, which makes for a refreshing but bracing swim. 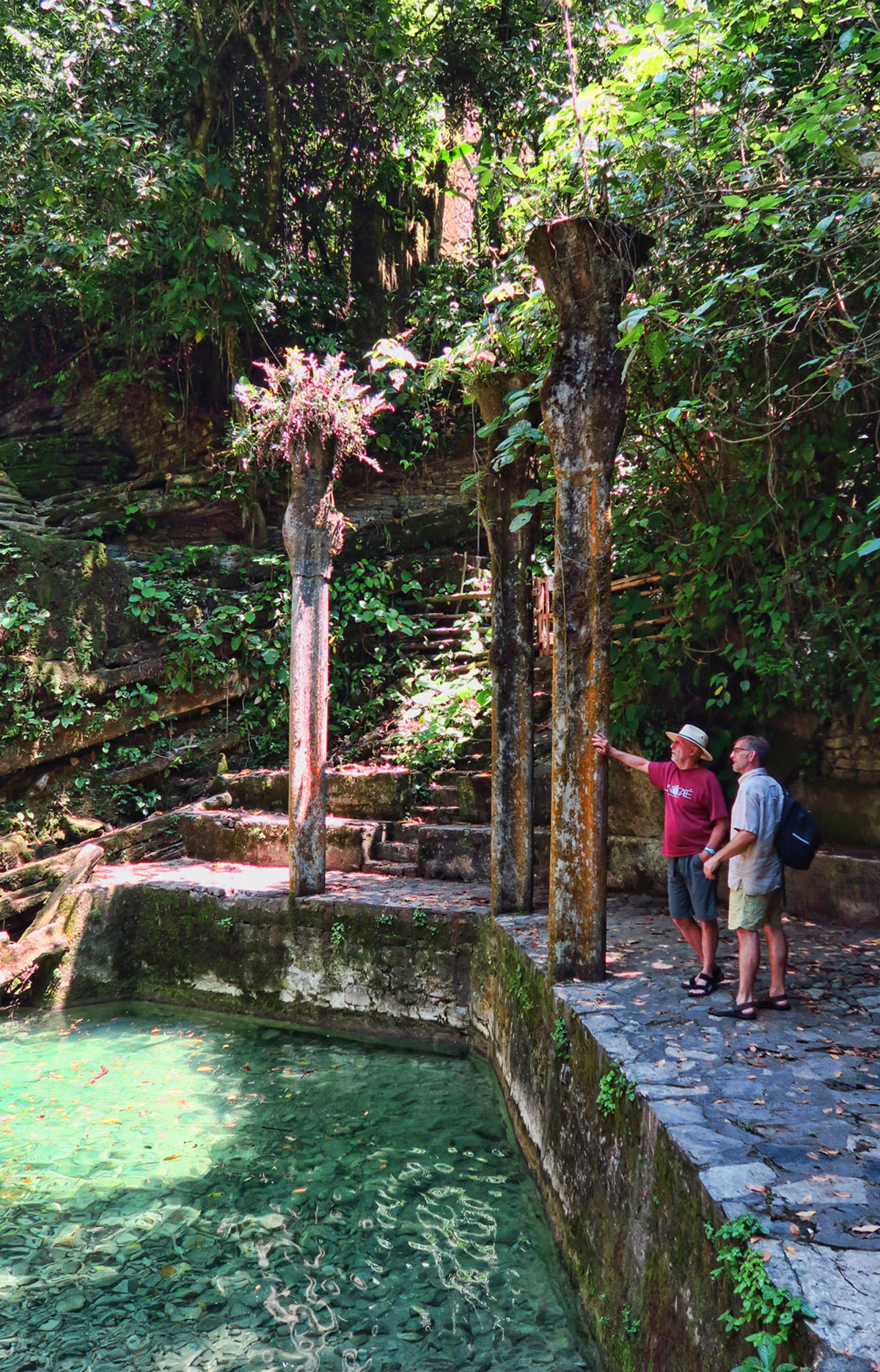 Peter and Jeff noting concrete diving platform high up on the edge of the pool. 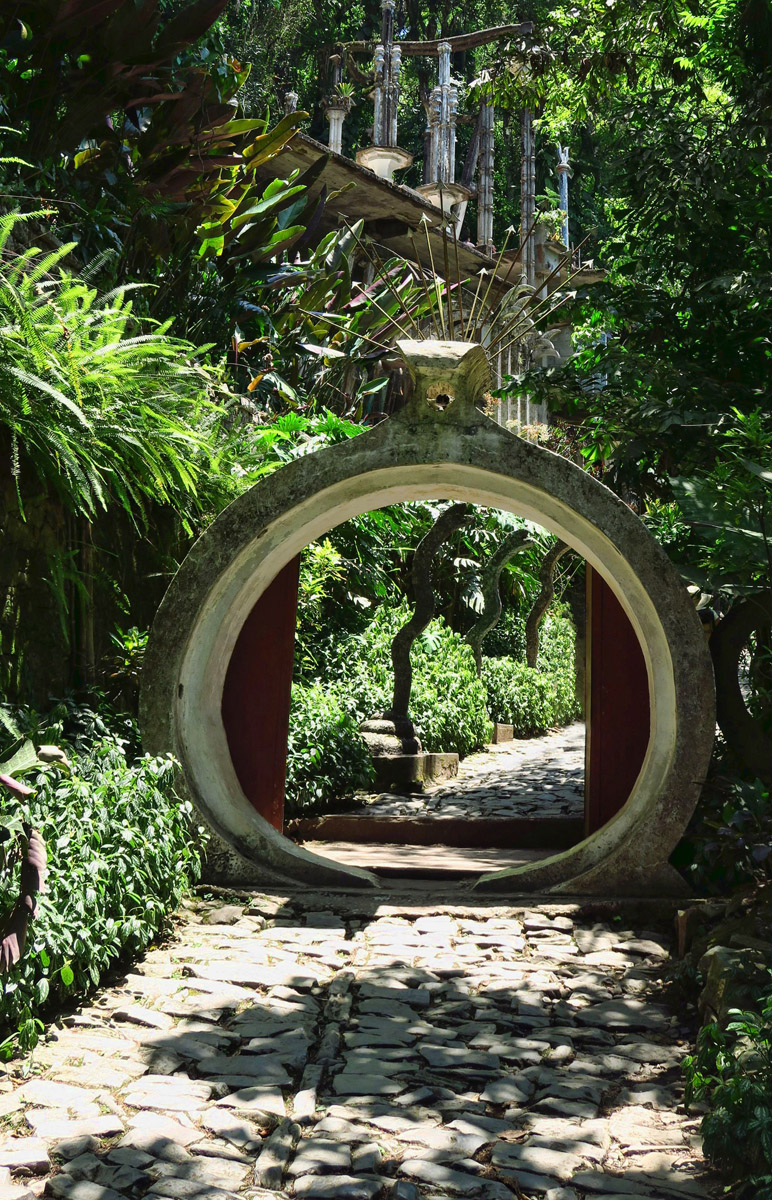 Through this ring, you can see some vertical concrete squiggles. These are serpents, lining the “Road of Seven Deadly Sins.”

In 1962, an unprecedented cold snap brought a layer of frost and snow flurries over the area.  James was away at the time, so the locals who’d never seen snow or frost reported it as “white ashes that burned everything.”  Having seen his entire garden of Eden withered away from frostbite, James decided to recreate the plants in a garden of concrete.    He would orchestrate the construction of 36 different concrete sculptures in the surrealist style. 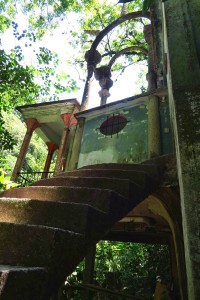 This is one of the few staircases that actually leads someplace, to the Mirador or lookout. 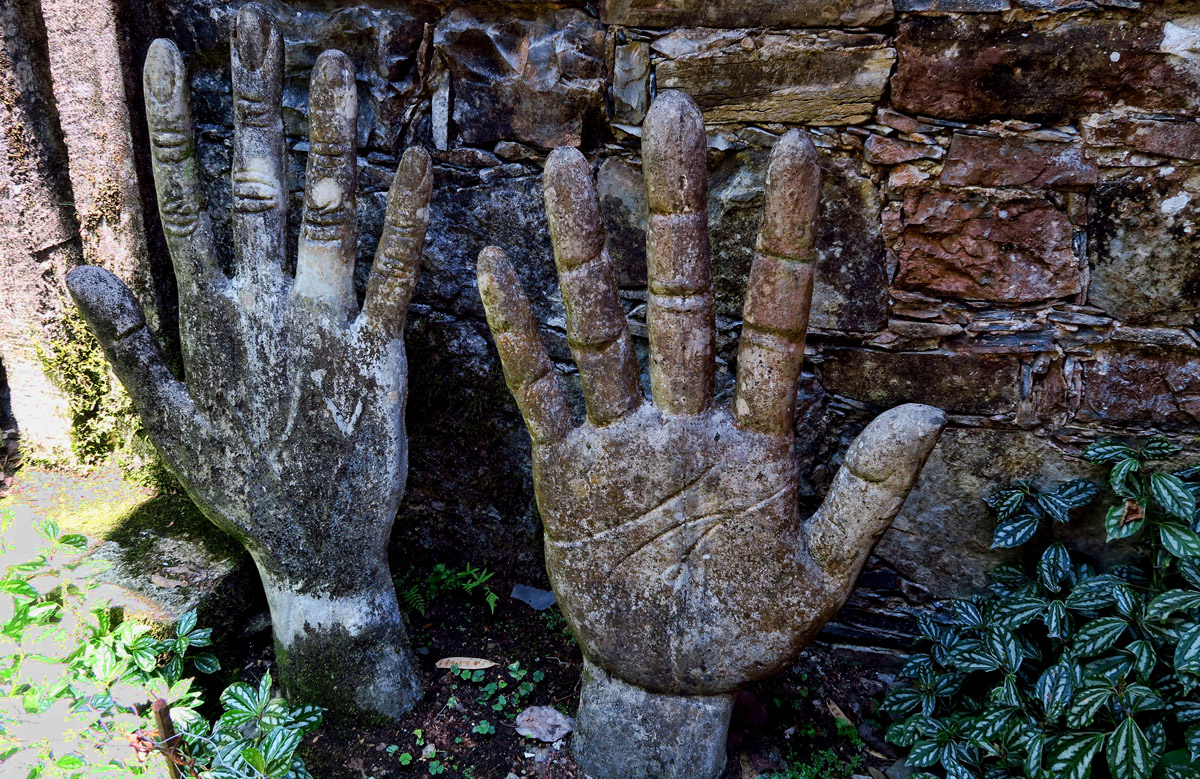 These giant hands are reported to be cast in the shape of Plutarco Gastelum, James’ guide and “travel companion.” 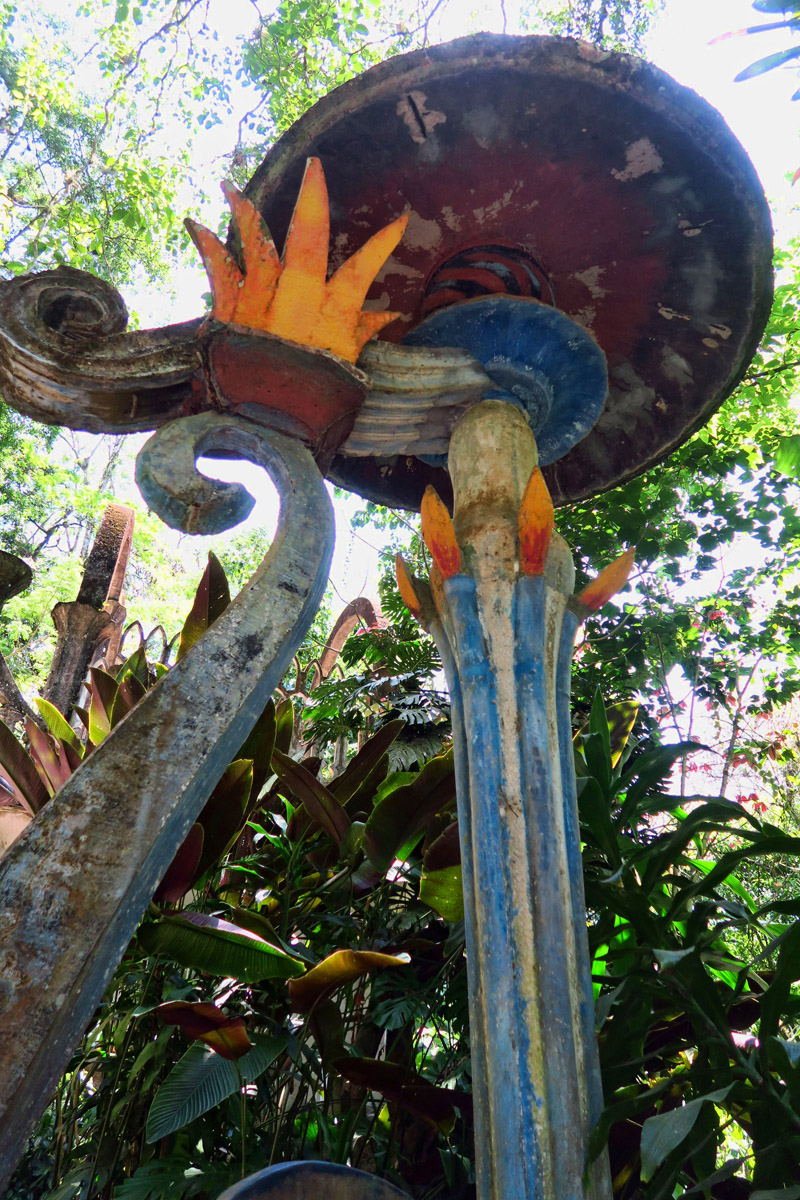 Edward James was a bit of an eccentric, even by artist standards.  He was often photographed with exotic birds on his head and shoulders.   It is reported that he requested that his hundreds of workers building the statues and tending the gardens work in the nude.   I can’t help but think about the mosquitoes.  😉 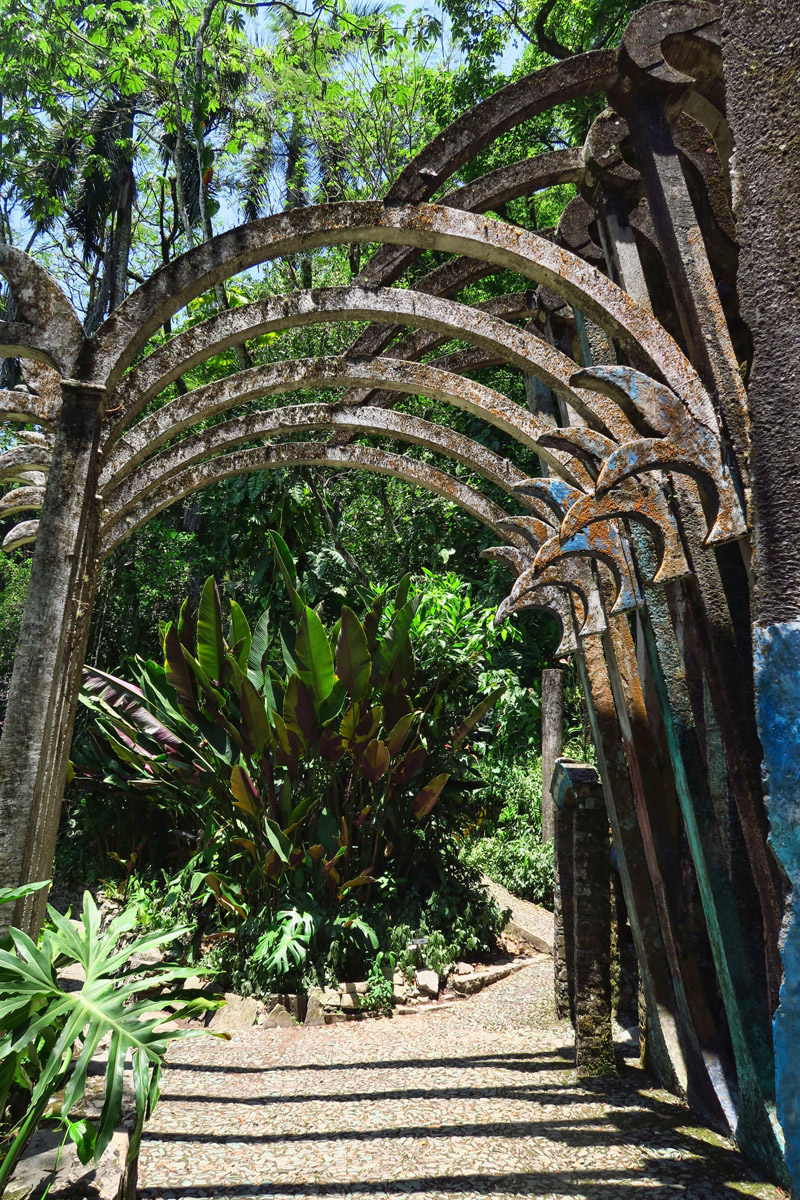 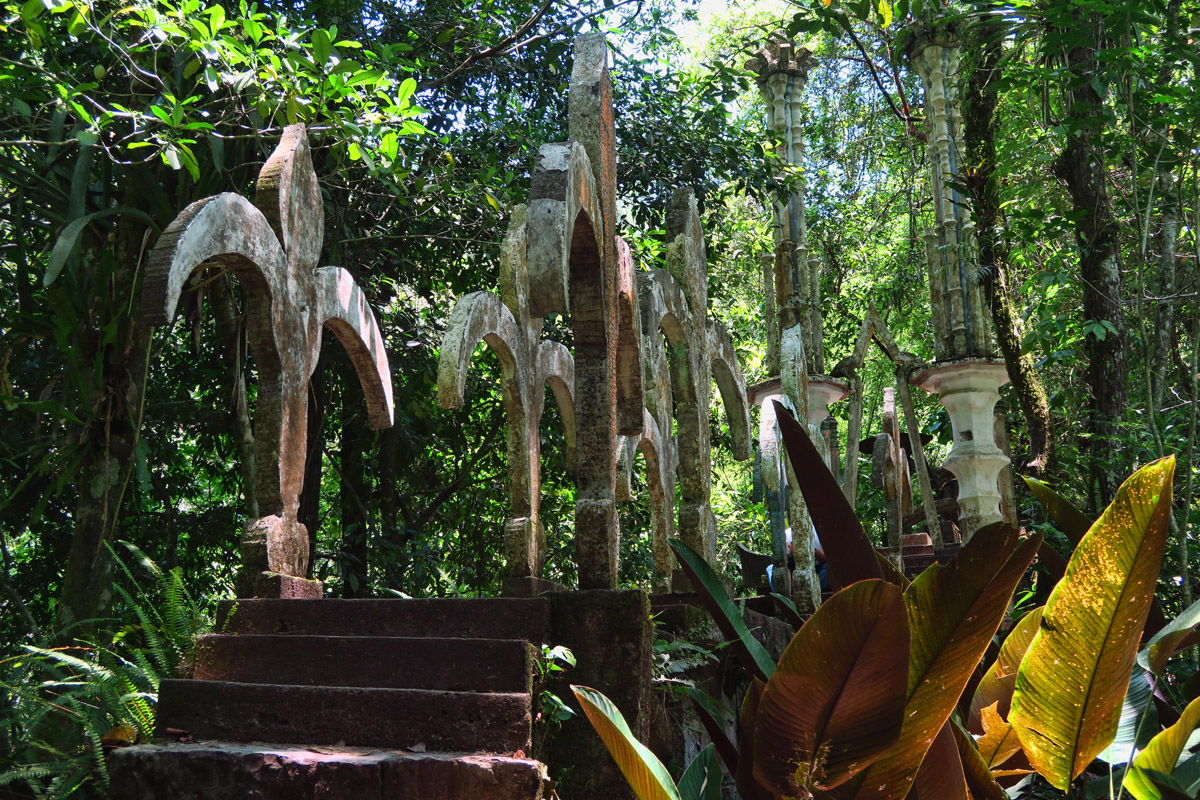 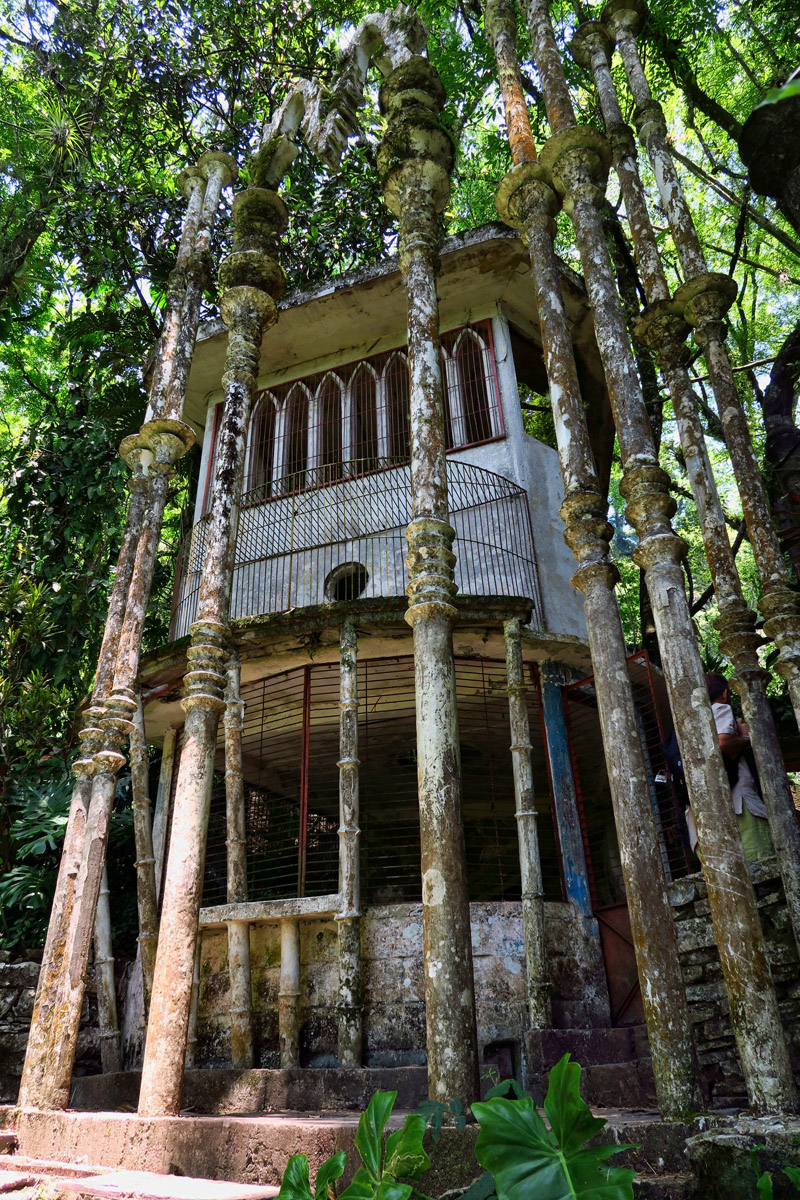 We only have a couple of hours to explore this phantasmagorical sculpture garden.  Someone suggests we split up and meet back at the park restaurant at a designated time.  This is welcome news to me, as thus far, we have spent at least half an hour at one of the swimming pools.  This would ordinarily be to my liking, but I know I’ve got limited time to explore this crazy place, whereas opportunities to swim can be had again and again. 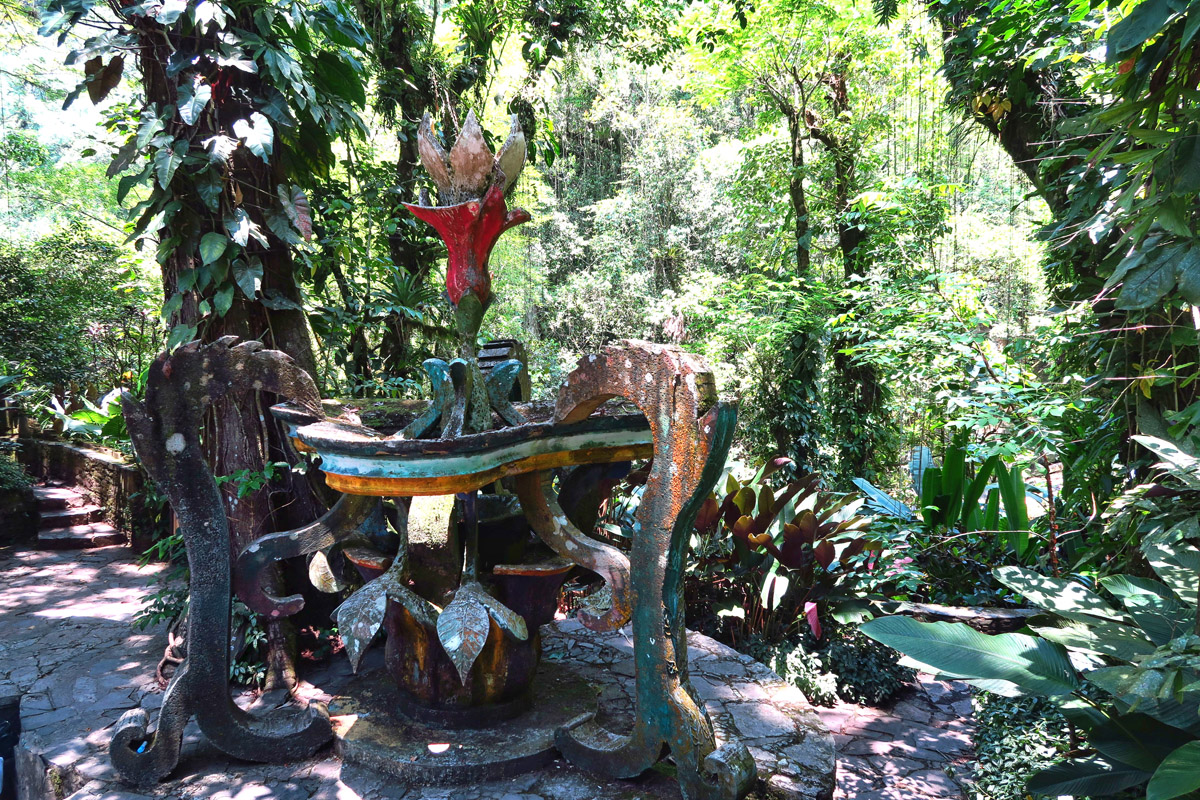 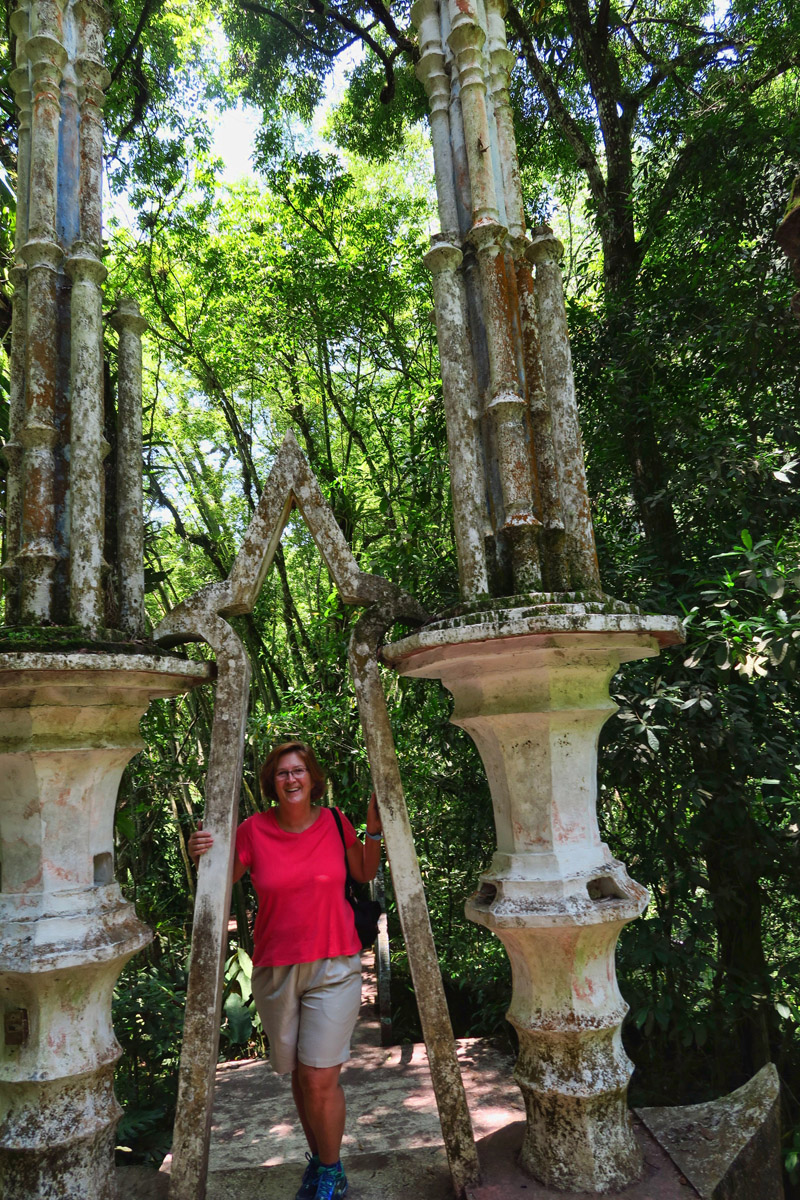 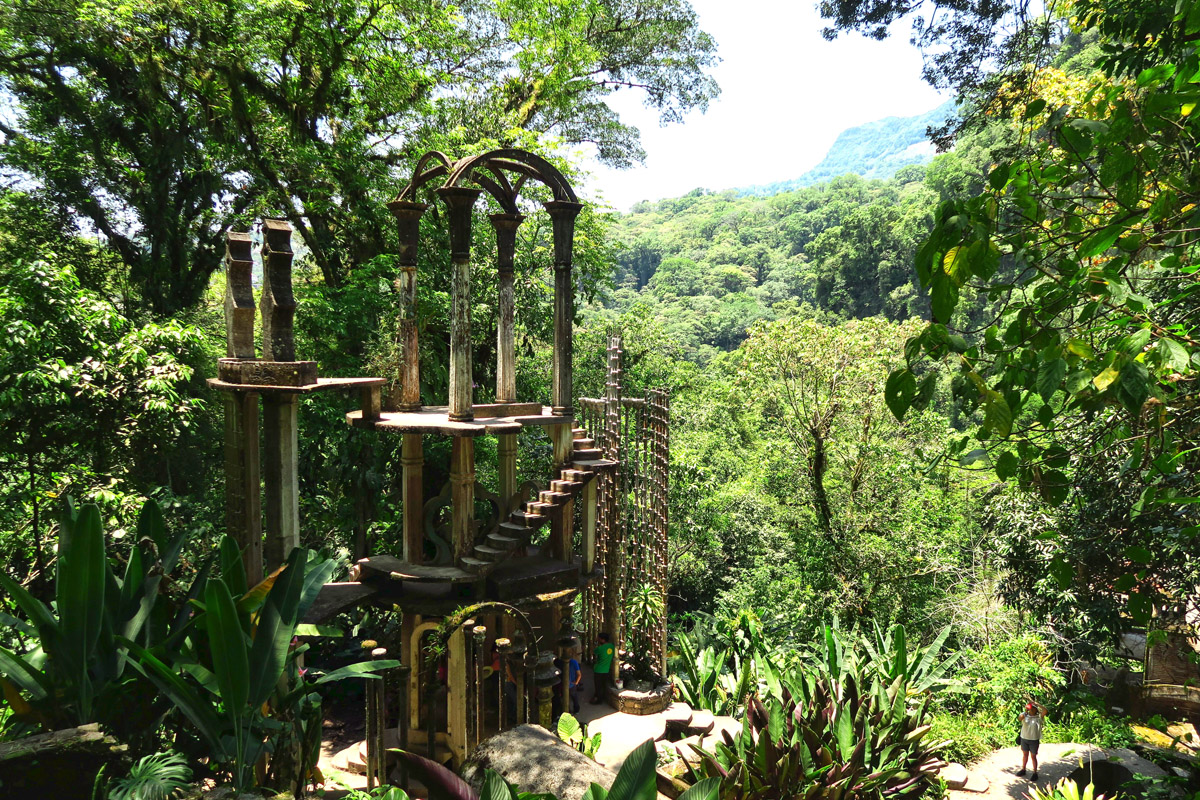 With only 90 minutes left to explore, I take off in a mad race to see how many of the sculptures I can locate.  Soon I reach the boundary of the park.  The path continues beyond into the rain forest, but a sign at the park boundary warns if one chooses to continue on up into the rain forest, safety cannot be guaranteed.  But why leave?  The jungle within the boundary is much wilder than the outside, with its twisting concrete shapes, impenetrable concrete bamboo forests, doors that lead to nowhere, and staircases that just end.  James himself said it was a case of “megalomania.” 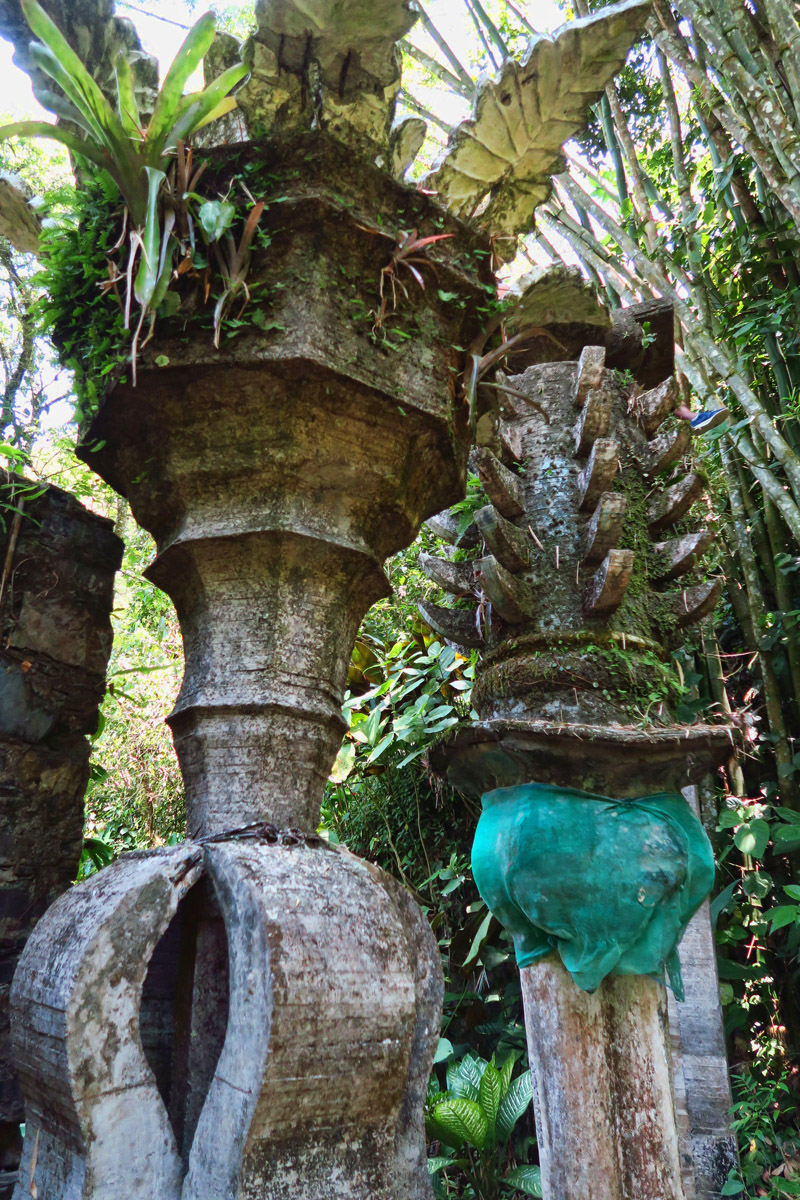 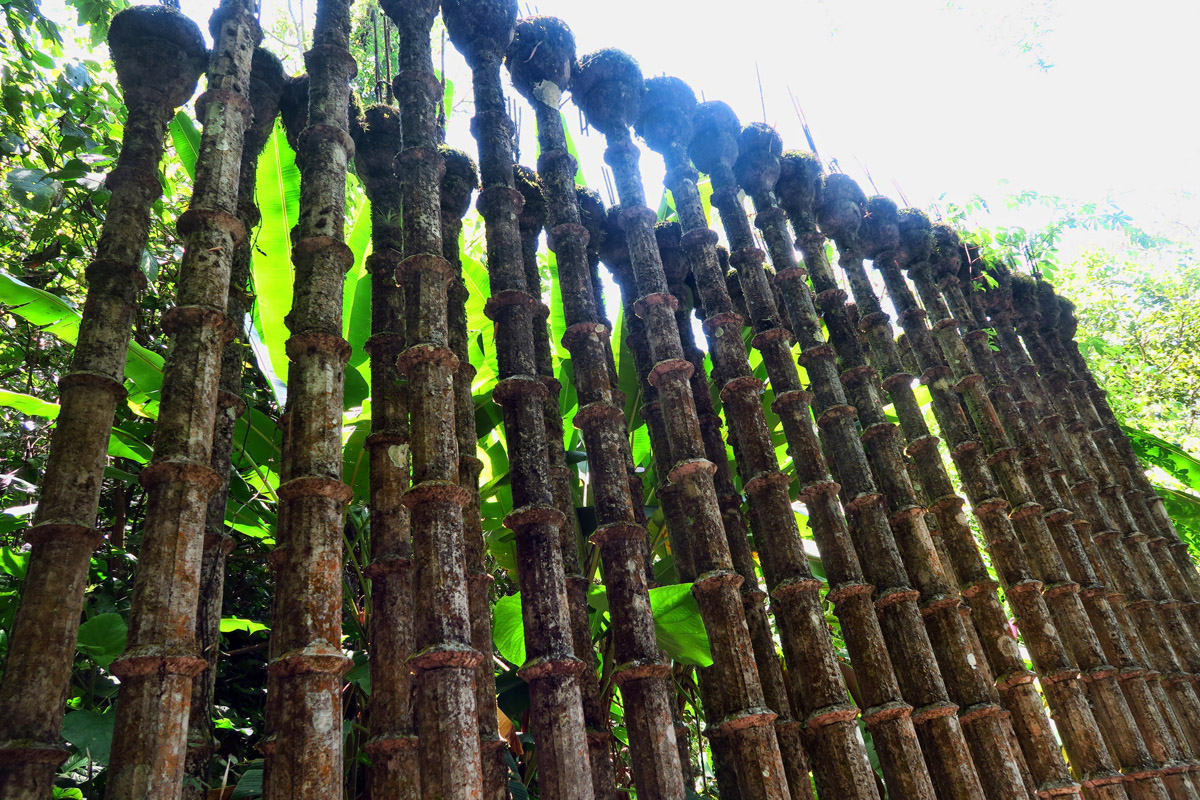 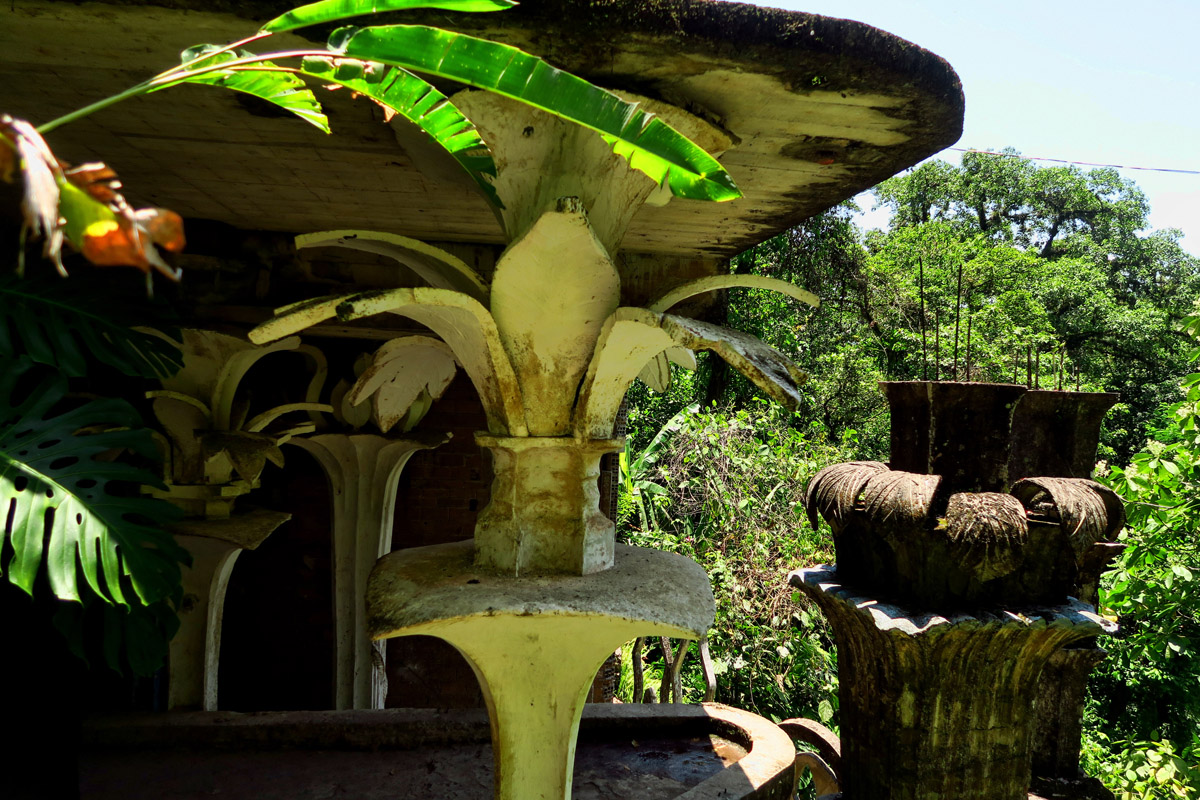 The sculptures throughout the 80 acre garden took a reported five million dollars to build.  He funded much of this by auctioning off portions of his surrealist art collection which included many works by Salvador Dalí, René Magritte, Max Ernst, and Picasso.  The concrete structures were first cast as wooden molds, then filled with reinforced concrete. 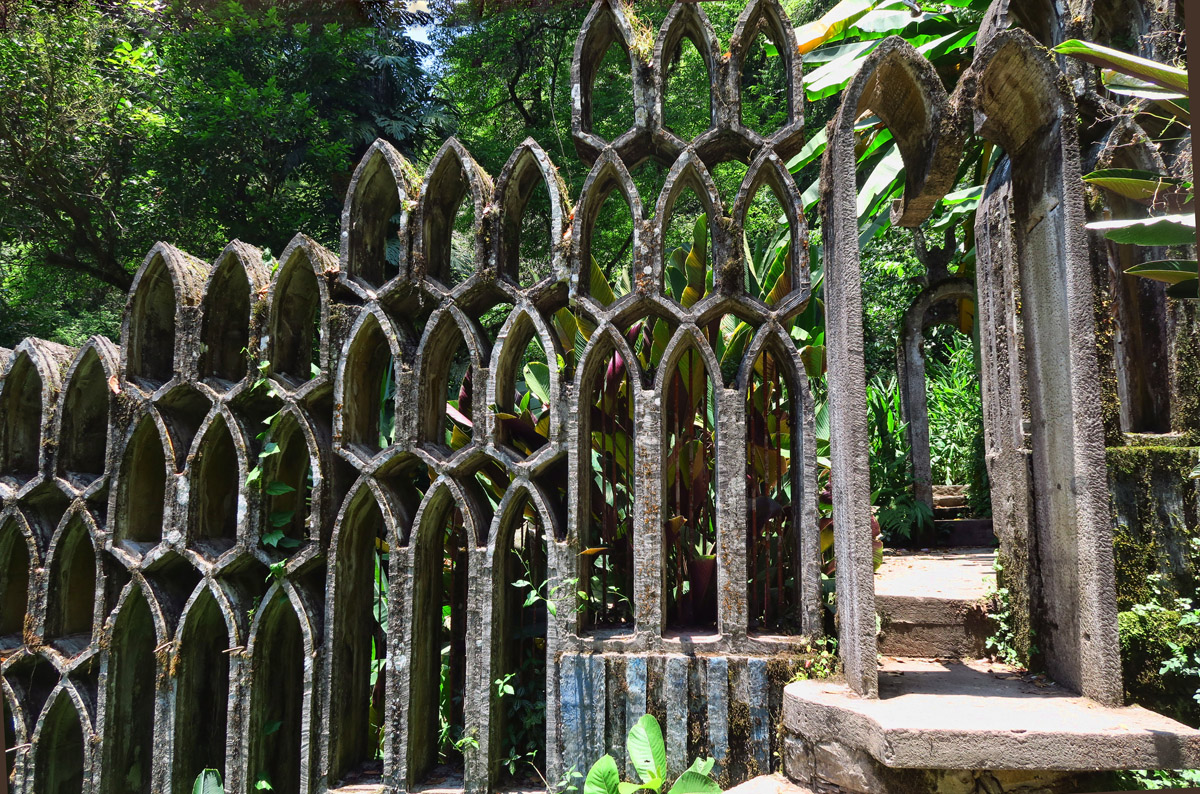 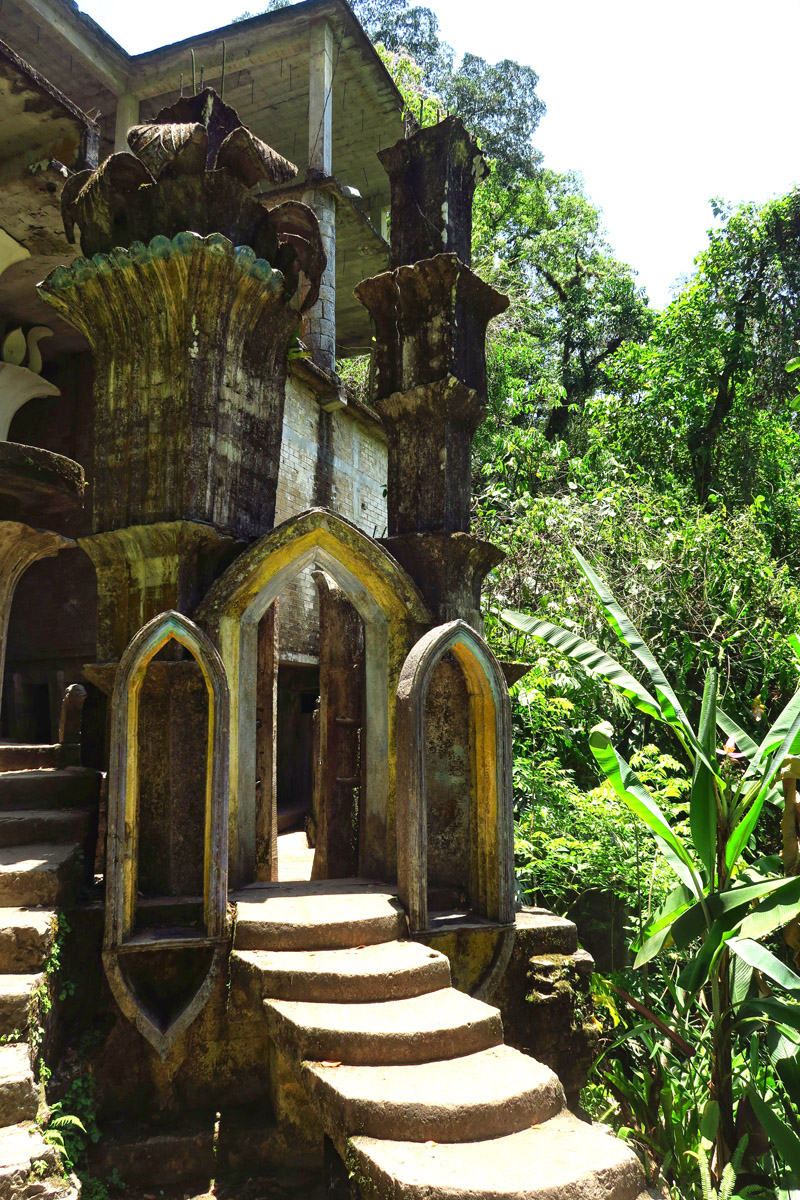 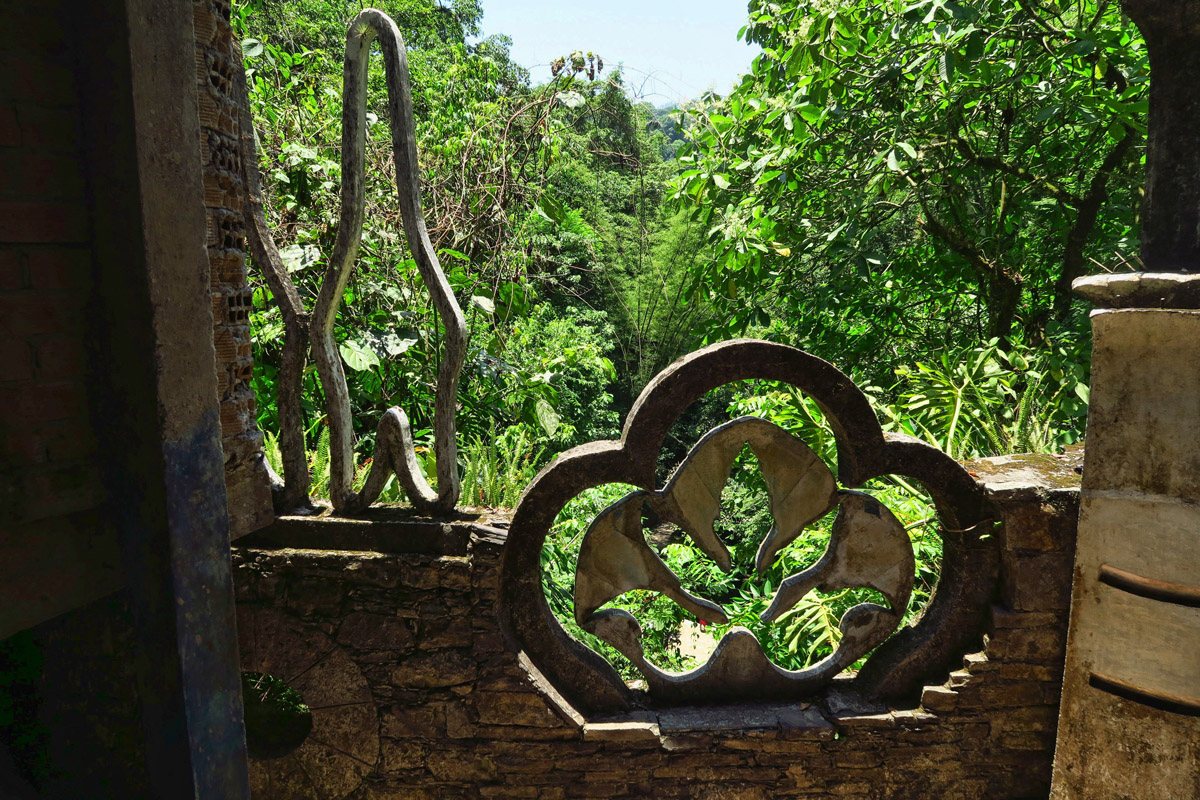 Did I find all 36 structures?   Close.  It was like a maze with no map, but judging from the many photos I snapped (unfortunately in midday sun,) I think I covered most of it.  But perspective varies depending on the angle, so it’s difficult to tell. 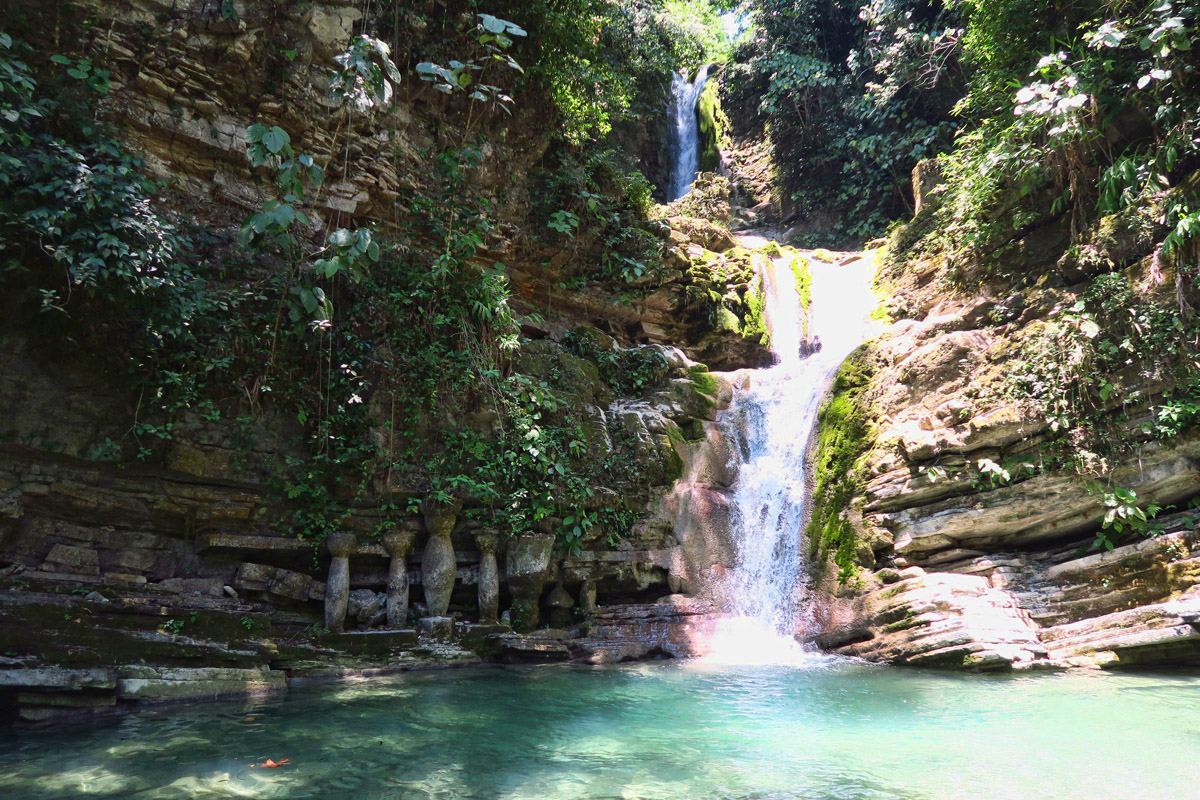 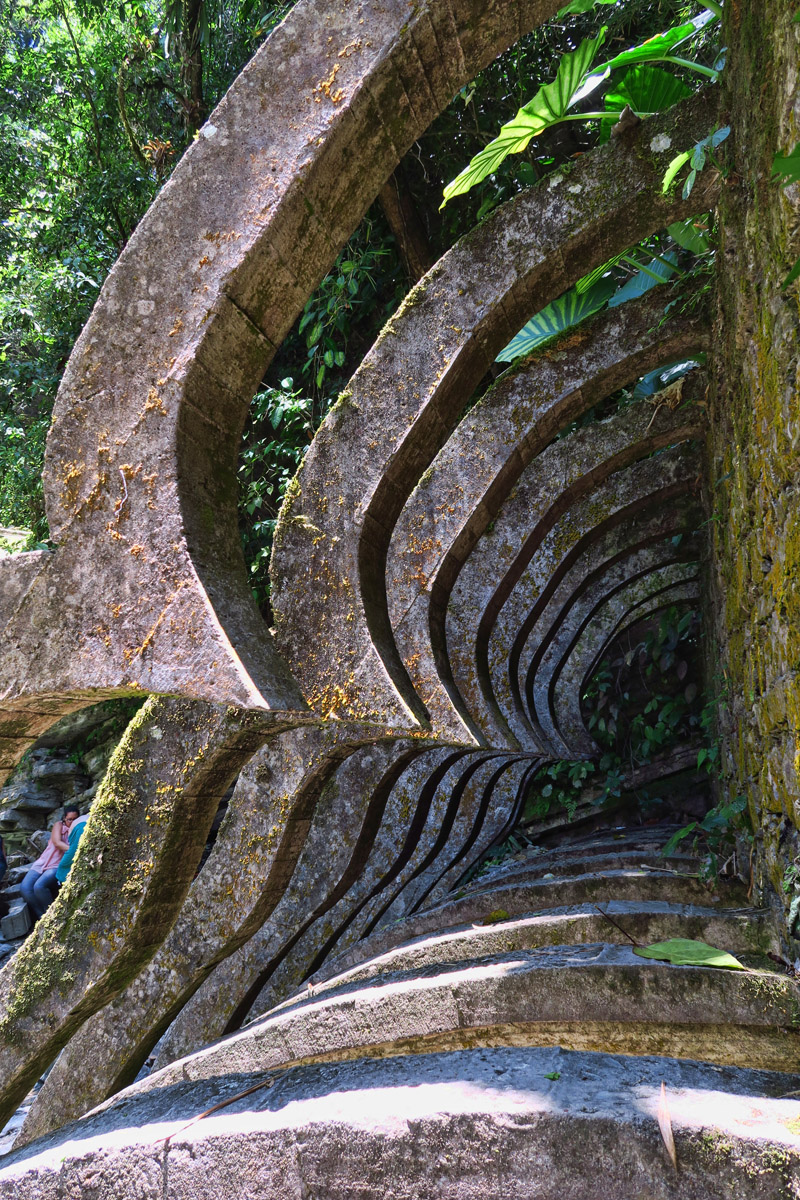 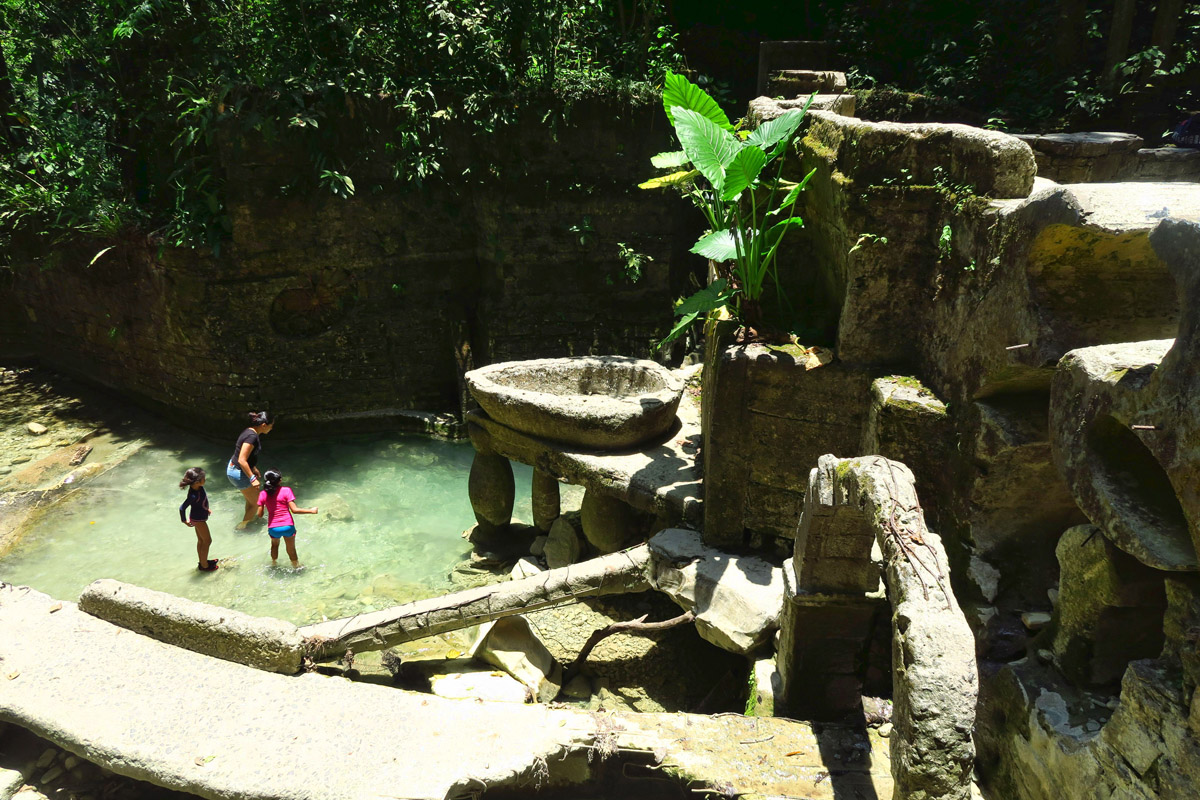 Note bathtub in the shape of an eye.

The irony of recapping my visit to this concrete jungle oddity just hours after the decision is announced to withdraw from the Paris Climate Agreement is not lost on me.  Perhaps in the not too distant future, concrete gardens will be all that’s left for us…or “of us” for that matter.  Part of the funding for the Fondo Xilitla foundation that now owns the garden is provided by CEMEX, one of the world’s largest cement manufacturers, known to violate environmental laws….A paradox in nature if there ever was one. 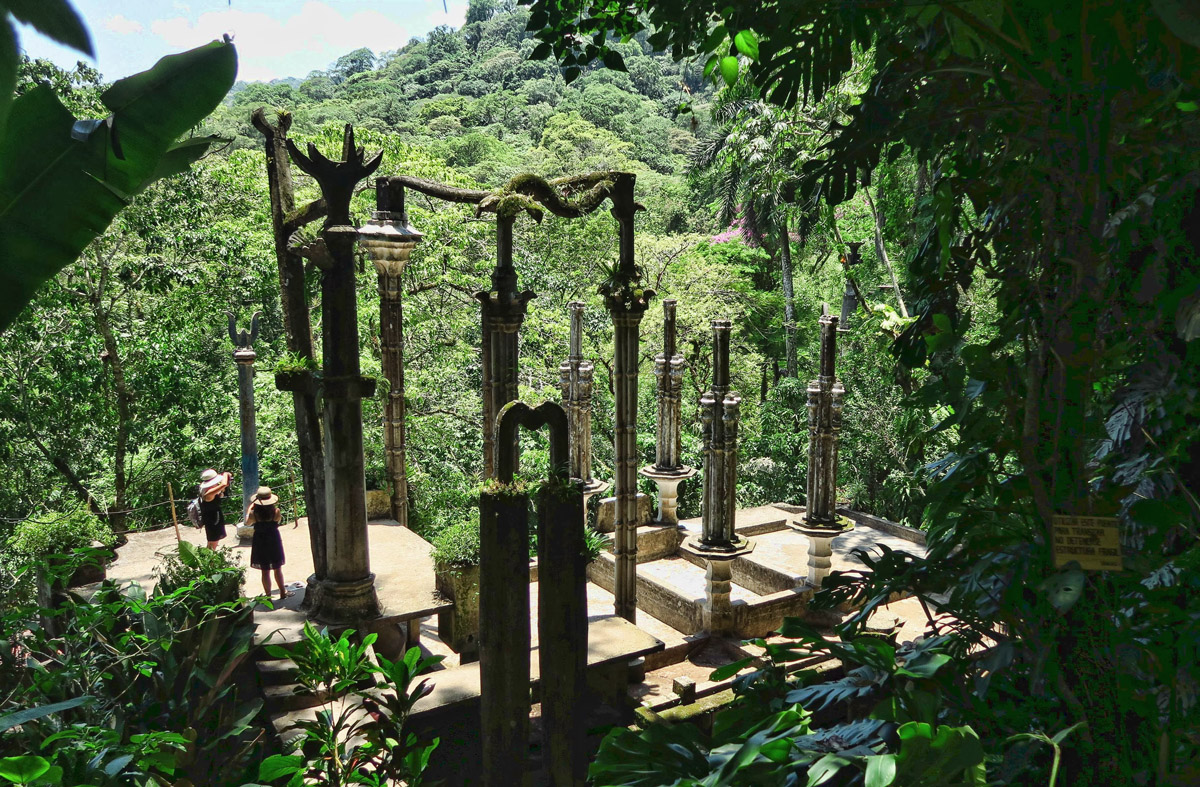 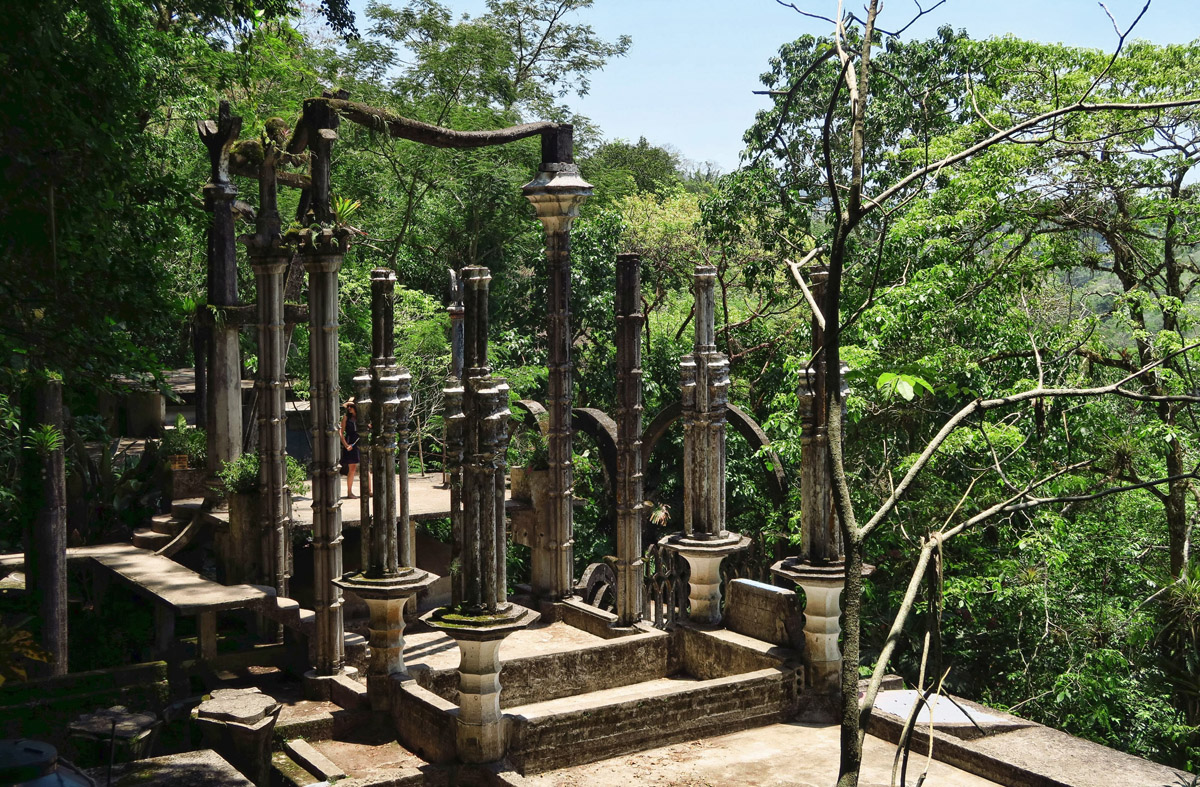 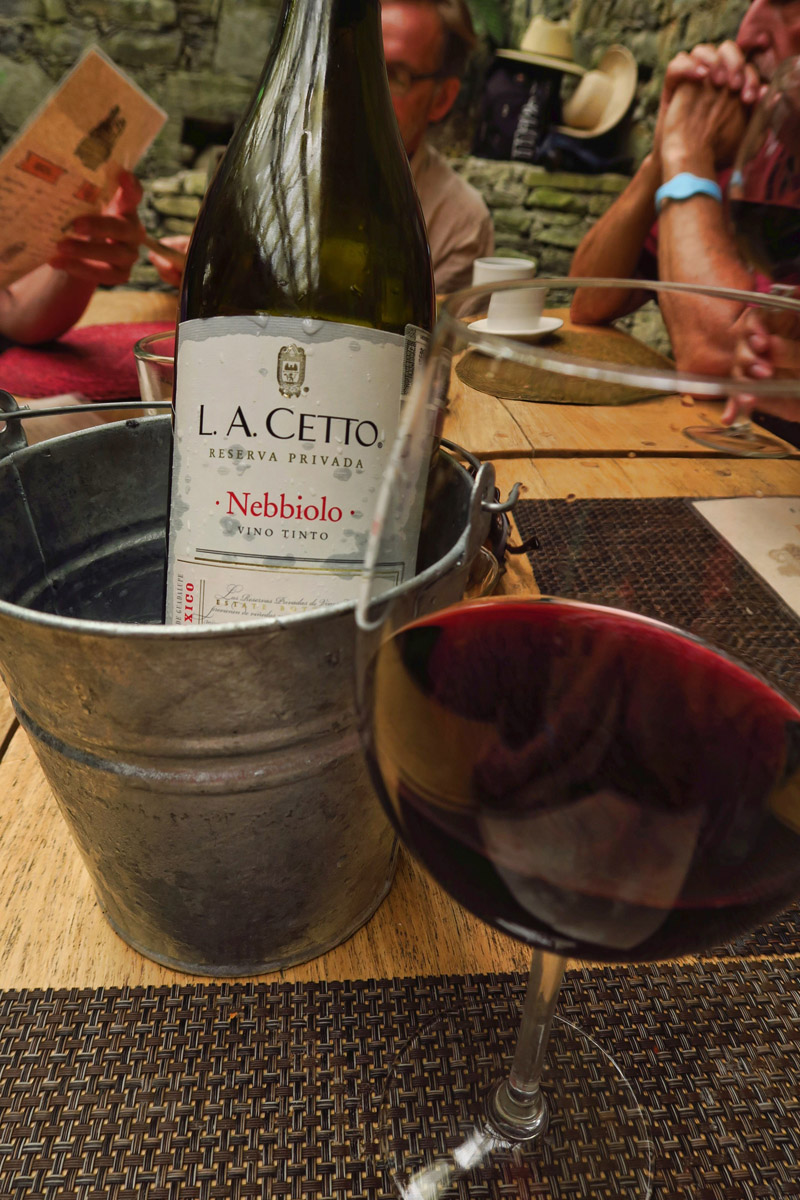 I highly recommend the sculpture garden’s restaurant with many fresh and inventive dishes, and good affordable wines!

13 thoughts on “A New Meaning to “Concrete Jungle””