So at last….it’s finally here. After thirty blog posts of my summer travels up, down and around the Atlantic side of Canada, this is my last installment…My final stop before crossing the border into Calais, Maine.

Of all four provinces visited this summer, I spent the least amount of time in New Brunswick. I feel like I slighted it in my haste. But have no regrets, for in doing so I dedicating the most time to Newfoundland. Although filled with beautiful spots, New Brunswick didn’t feel all that different than Maine.

I’d been leap-frogging RDV2017, Rendez-vouz 2017, the tall ships transatlantic race making its way across the eastern side of Canada since I left Boston. Some 40 majestic “cathedrals of the sea” were making their way across the eastern Canadian seaboard to commemorate Canada’s 150th anniversary of the Canadian Confederation. Although their itinerary included many of the same stops I had planned to visit, I just couldn’t seem to end up at the right place at the right time. So when I saw their tour of Canada was culminating in Saint John, New Brunswick (not to be confused with St. John’s in Newfoundland,) I planned to make that my final Canadian stop as well.

Unfortunately, the weather was about as abysmal as a soggy wet spinnaker in a sailboat race. Heavy, low lying clouds, constant misting rain, and gusting wind forcing raindrops through supposedly sealed orifices in my rain gear. But I had been watching the calendar for a month now, timing all other stops accordingly with this grand finale in mind. I wasn’t about to let soggy socks stop me from attending the festival.

Out of 40 tall ships participating in the RDV2017, ten ships with official “tall ship” status (more if you include those from the Royal Navy) would be making a “guest port” stop in Saint John, the most of any city along their Atlantic Canadian tour. And, the entire festival was FREE! (Donations accepted to help school young sailors.)

I arrived at the festival in the afternoon, trying to time my walk from the urban Rockwood RV Park into town between squalls, only to find no people there! There were ropes cordoning off lines to tour the ships, but no one was in line. Furthermore, how could anyone possibly tour the ships when all I could see was the tops of the masts sticking up above the sidewalk? I had completely forgotten about the Bay of Fundy’s 25 ft tidal swings. It was low tide. The crowds had dispersed, waiting for high tide when the ships would return to ground level.

I went back the following morning during high tide to find what I had expected from a festival; crowds, pirate imposters, live music, food trucks, and lines waiting for permission to come aboard. All in spite of the rain… 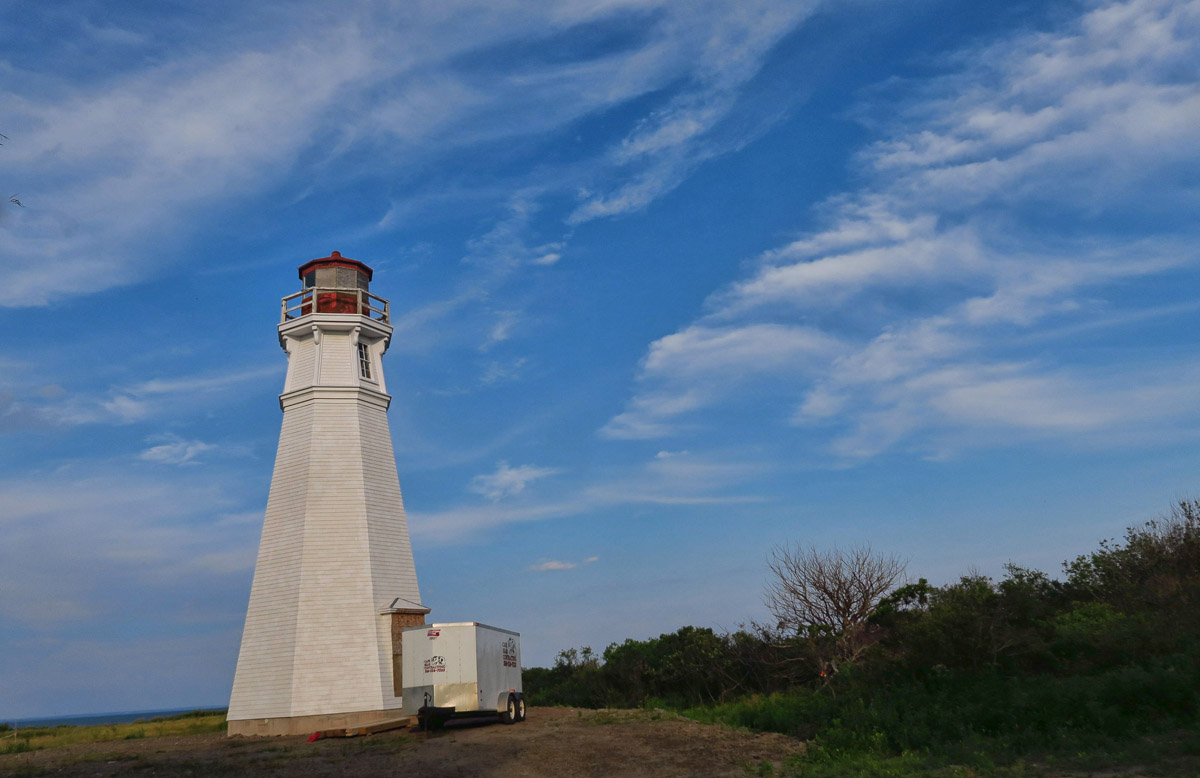 At the New Brunswick end of the Confederation Bridge is the Cape Jourimain Nature Centre with walking paths. At the end of the >2 mile trail is this beautiful Cape Jourimain Lighthouse. It just underwent it’s third successful move back from an eroding shoreline, where the Nature Centre hopes to raise funds for further restoration. Such a beauty! 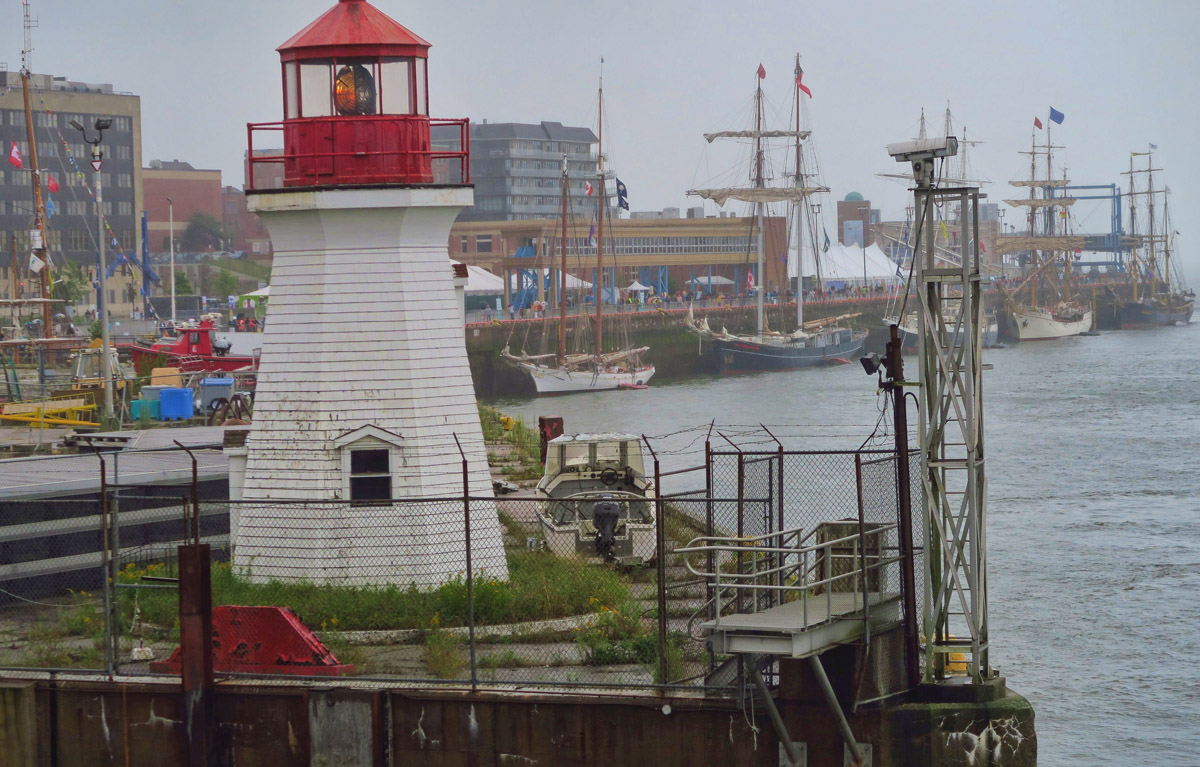 Saint John, New Brunwick. I had but one job…to photograph the lighthouse with the tall ships in the background. How I managed to decapitate the lighthouse, I still do not know. 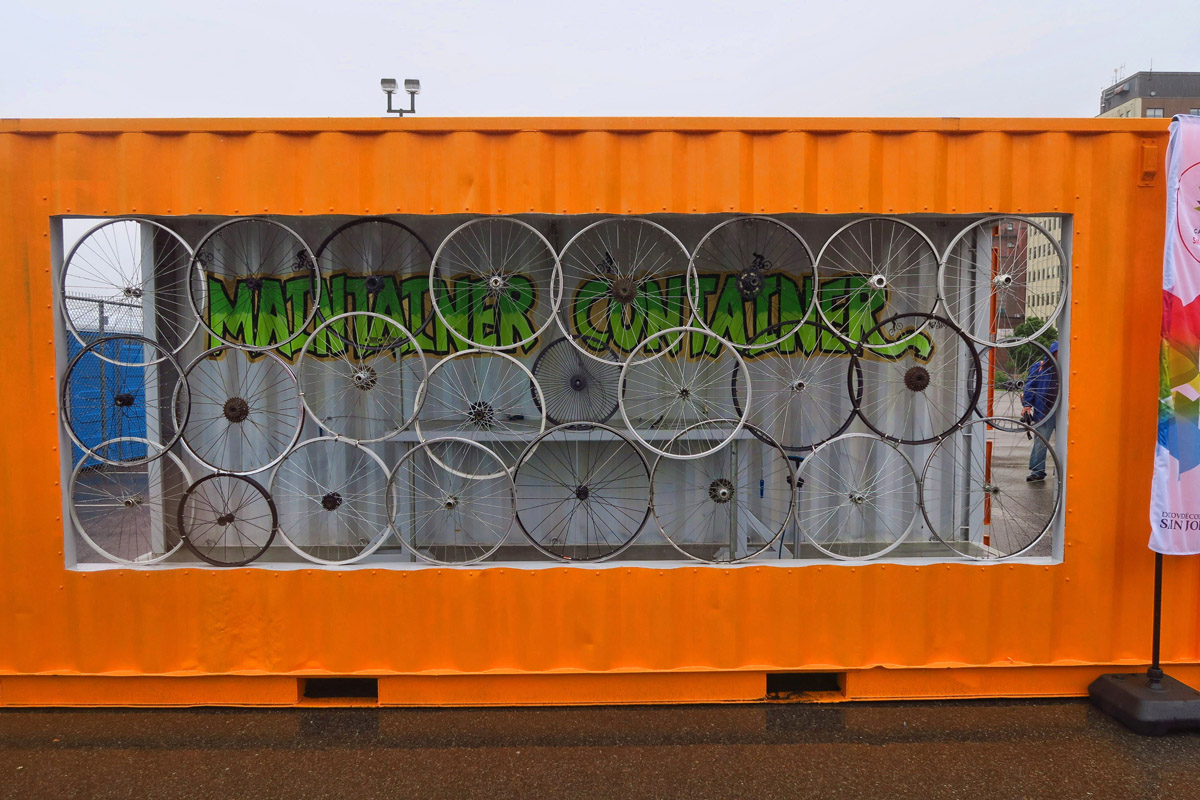 At the entrance to the festival is the “Maintainer Container,” a bike maintenance stop in an old container, with tools and air pump. What a great way to support bike transportation! 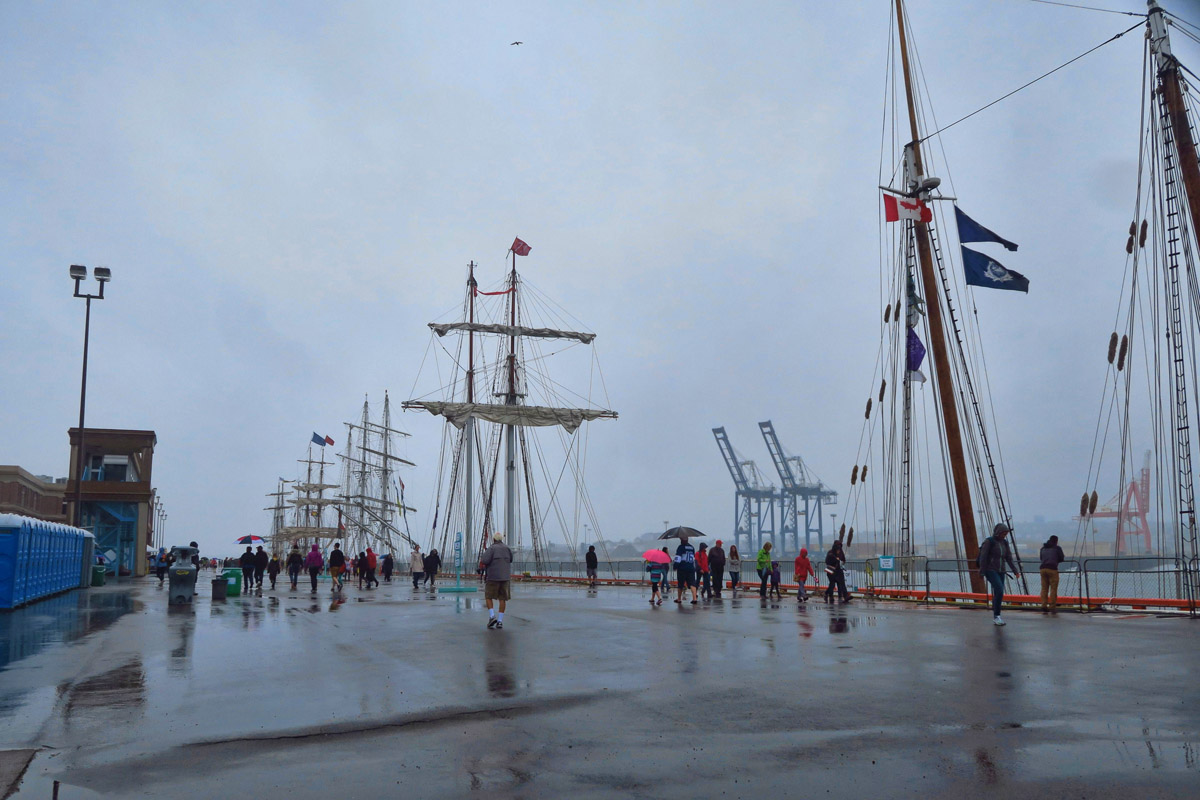 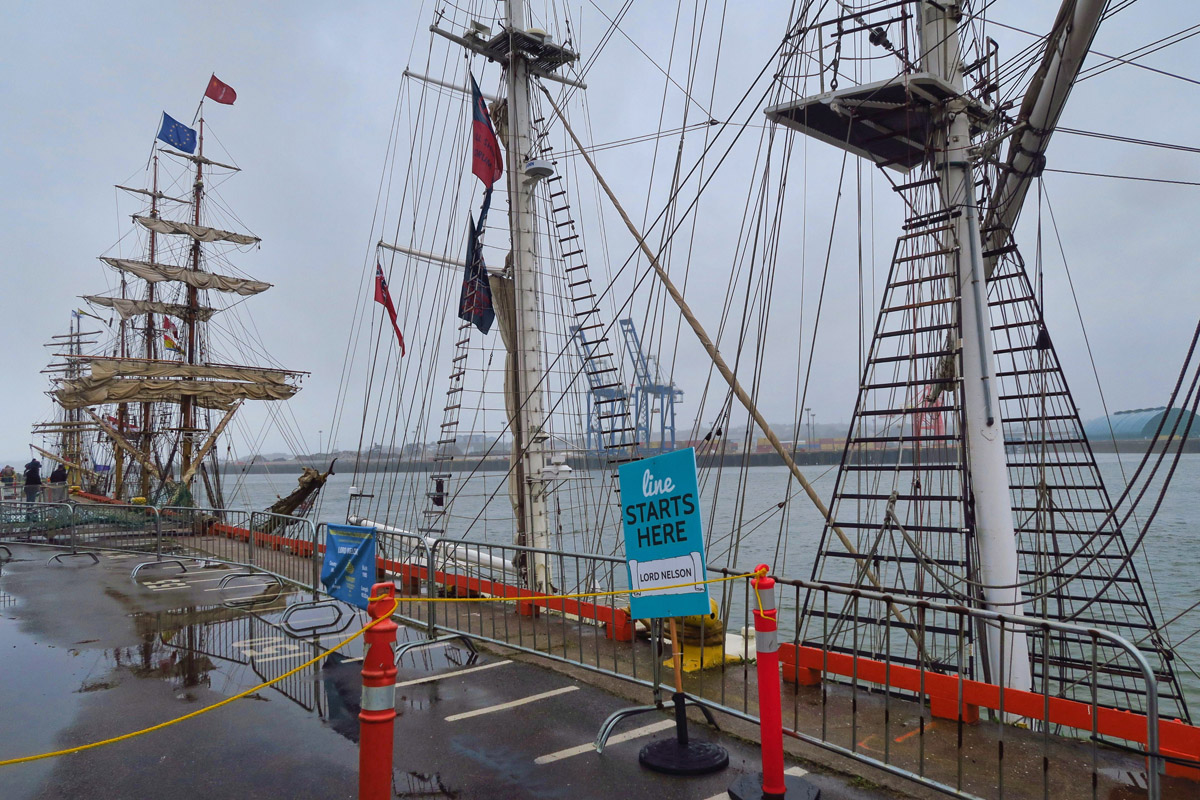 All I can see above the sidewalk is “half-mast.” 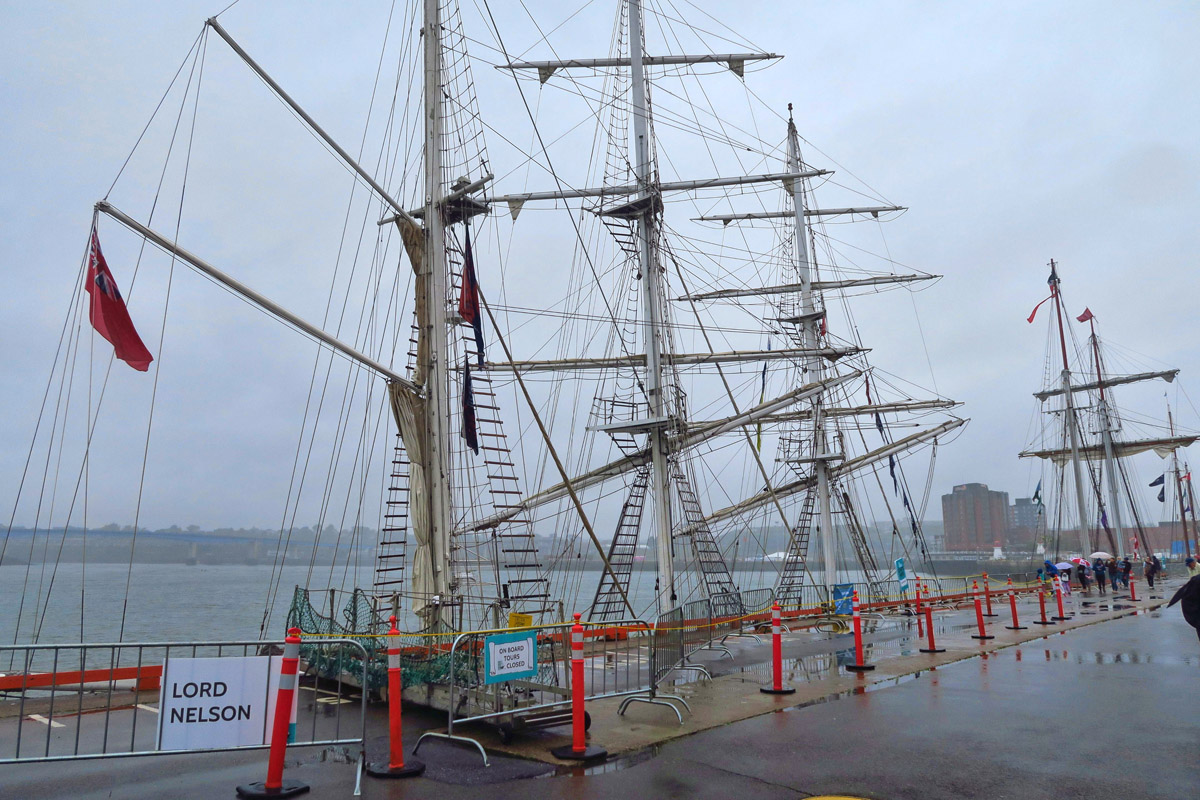 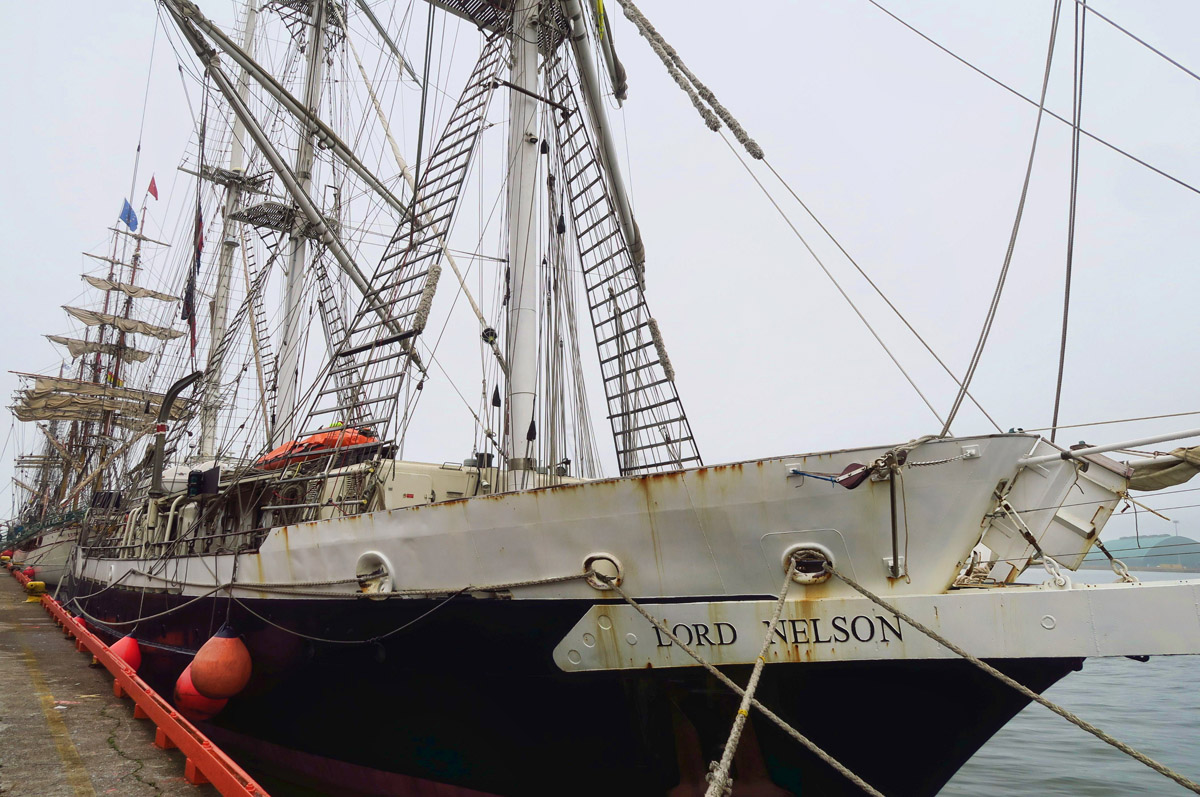 When I return at high tide the next morning, the boat is now accessible. 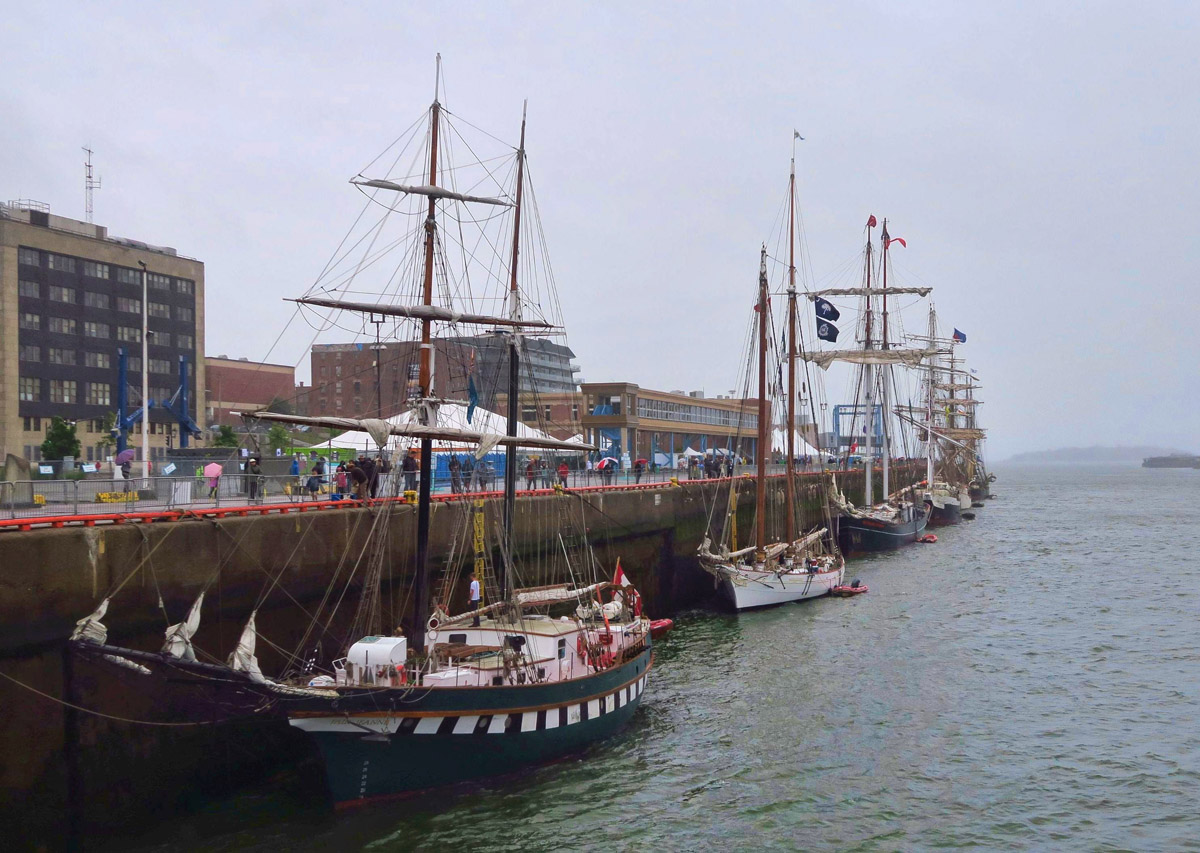 Here is a look at the wharf at low tide. 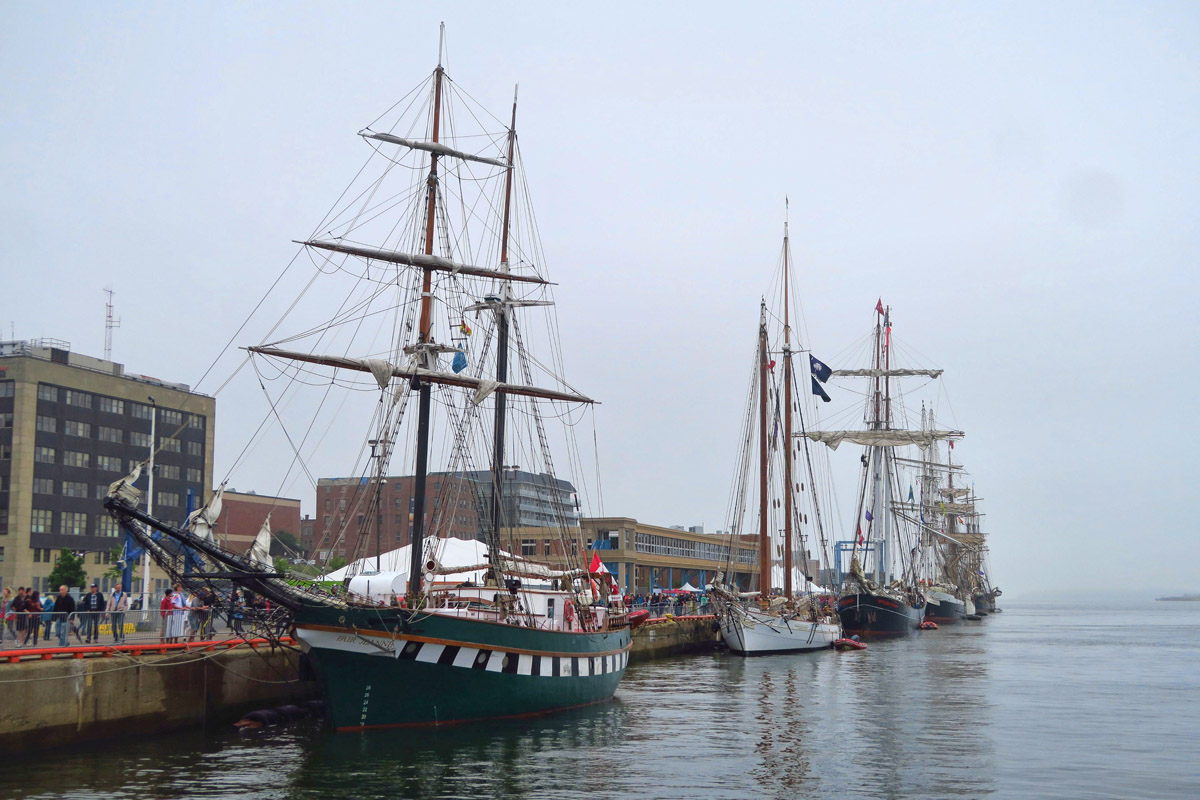 Here is the same vantage point at high tide the next morning. 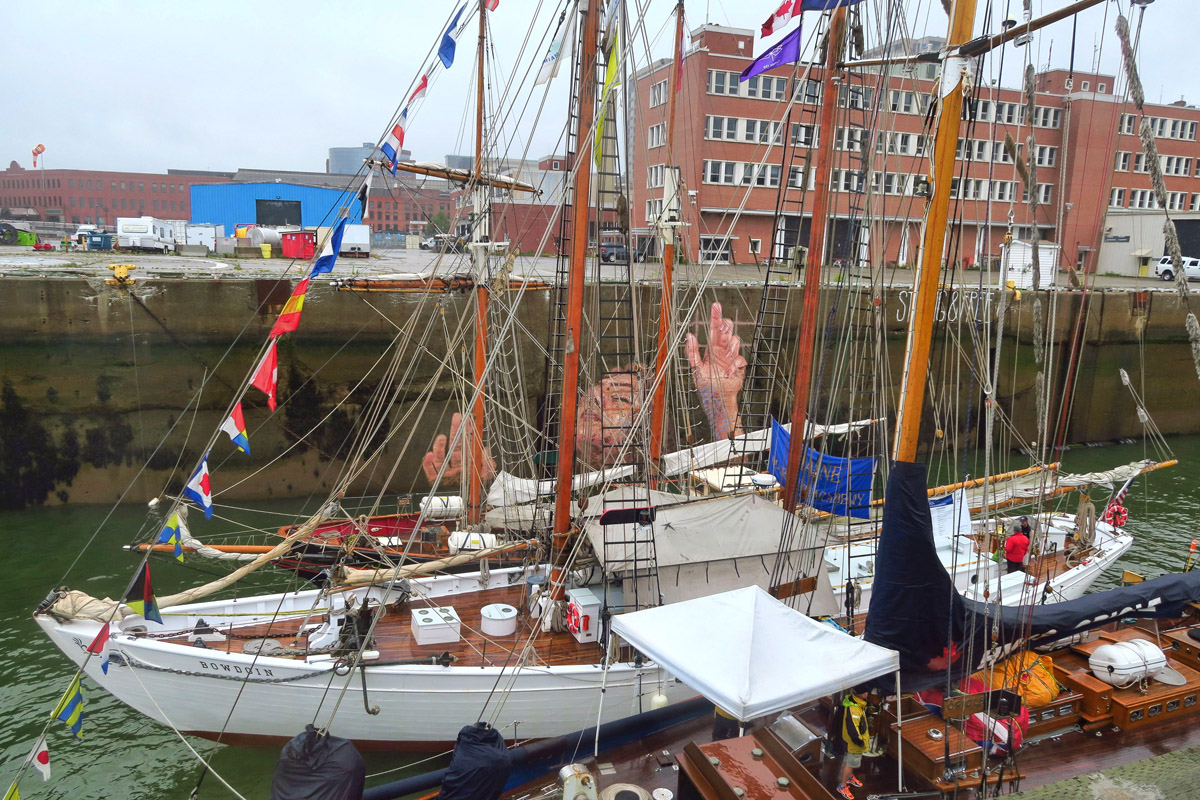 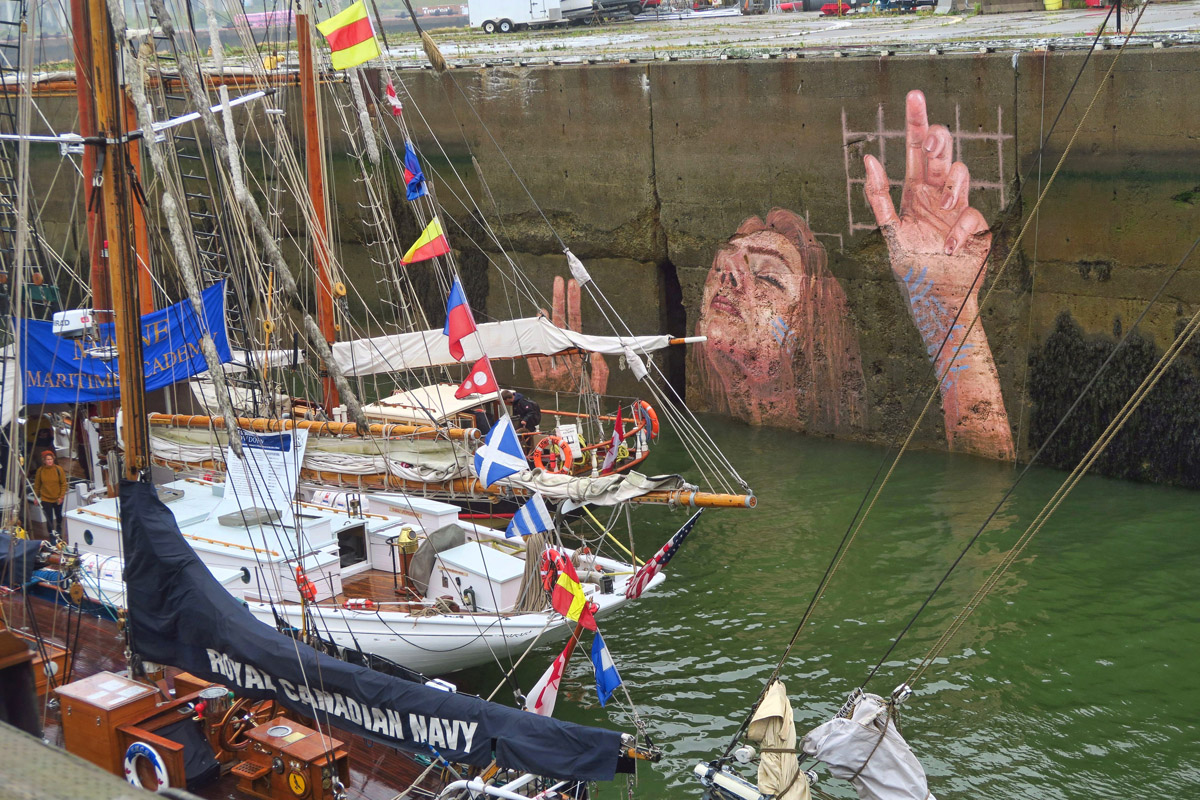 This mural is by the renowned street artist “Hula” who creates semi-submerged murals from his stand-up paddleboard. 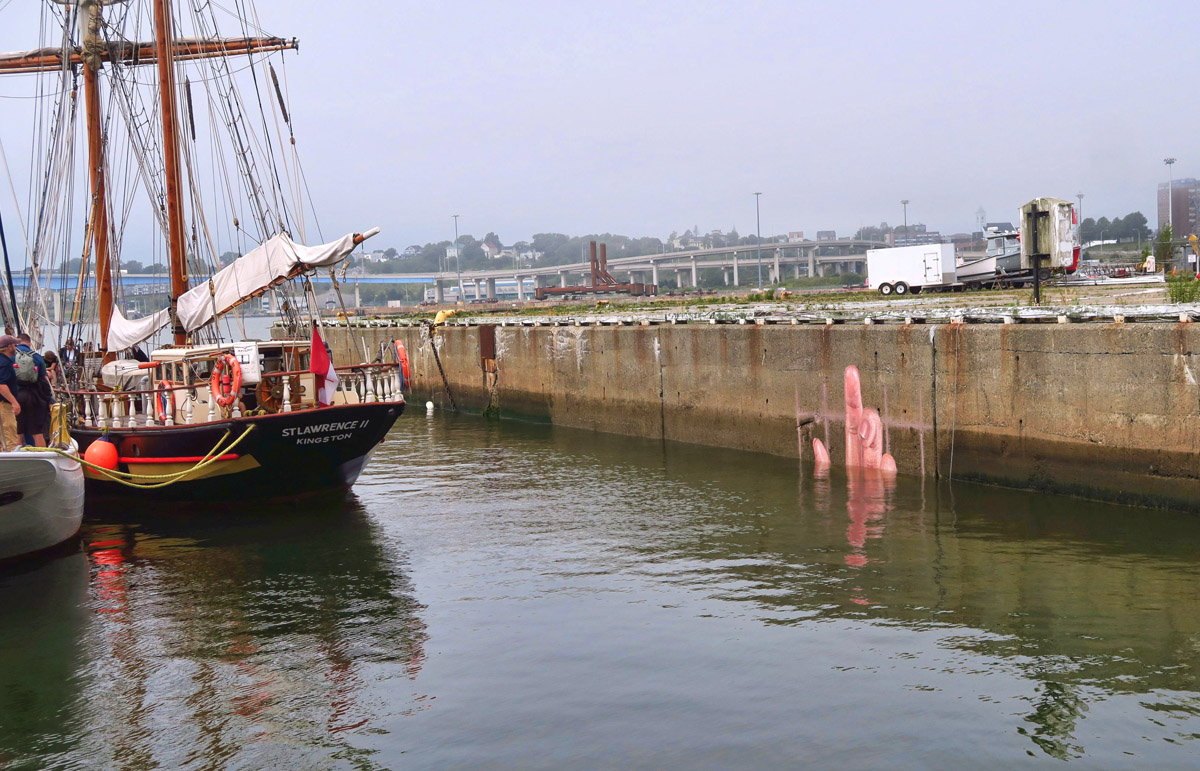 Here is a fingertip glimpse of Hula’s artwork at high tide. 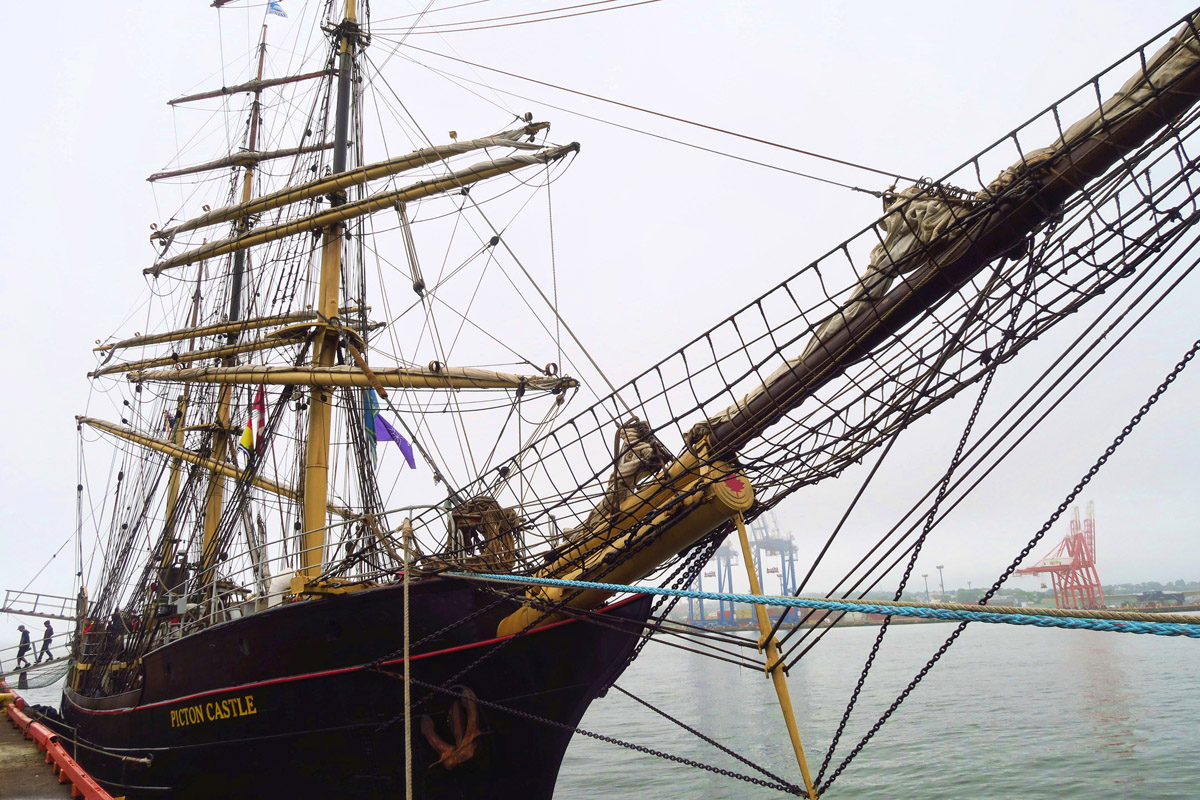 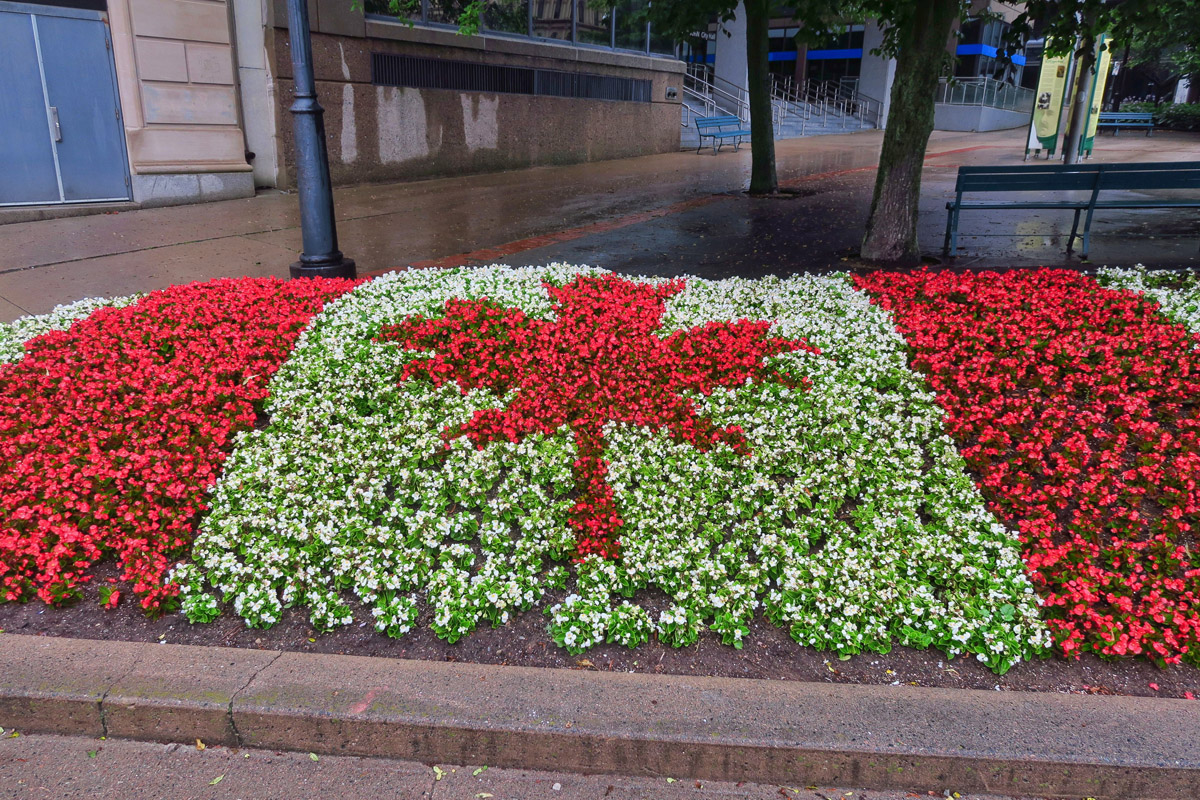 When it comes to national pride, no one does it more beautifully than Canada!

It was with a great deal of trepidation that I crossed the border from Saint Stephens back over to Calais, Maine. I felt anxiety for so many reasons. I was carrying items I knew would be questionable at the border crossing; Too much Iceberg Beer. One too many bottles if Iceberg Vodka. And a five pound sack of Prince Edward Island new potatoes, fresh out of the PEI red dirt. I had gotten rid of all my “known violations,” eggs, green vegetables. I was most worried about the meat in my freezer that had come across the border with me, but bore no “Made in the USA” label. I was boarded, but in the end, all I lost was a half a carton of cherry tomatoes.

But I was most nervous about the little Tracker, who had been sitting patiently on the Calais Self Storage lot for two months. Would it start? Would my bike, tow bar and traveling liquor cabinet still be on board? Would the Tracker itself even still be there? Calais’ Self Storage wasn’t exactly a gated fortress. With the Tracker’s rag top that can be accessed through a zipper, it’s always a risk. But as I turned the corner on South Street, there up on the hill was the Mighty Tracker, sitting dutifully awaiting my return. It roared to life on the first crank. There was a note on the windshield. “If you would consider selling this car, please call Tim at…” No way, Tim. No way.

Thanks to everyone who stuck with me on my tour around 4,500 miles of Atlantic Canada. It had to be one of the best summers of my life. I hope I managed to convey some of the joy and wonder that I felt through exploration of this incredibly beautiful land. Thanks for all your wonderful, always inspiring, often informative comments and compliments that helped to cheer me on…