Ask any full timer who might be thinking of becoming a “some timer” what places are on their short list for settling down and establishing a home base?   Prescott, Arizona is likely to be in their Top Five.   The high elevation combined with the arid climate
makes for mild winters, survivable summers, and near-perfect weather in longer-than-
average spring and fall.   Such a change of seasons can be a rarity in the southern US. With the crazy weather patterns in the west this year, I experienced three out of four seasons in just one week!

Prescott is the outdoor enthusiasts dream, with over 80 miles of hiking and biking trails in their Mile High Trail system.  Nearby are several smaller lakes ideal for kayaking.  If you need a big city fix, Phoenix is only 90 minutes away, with Sedona’s red rock vistas an hour in the other direction. 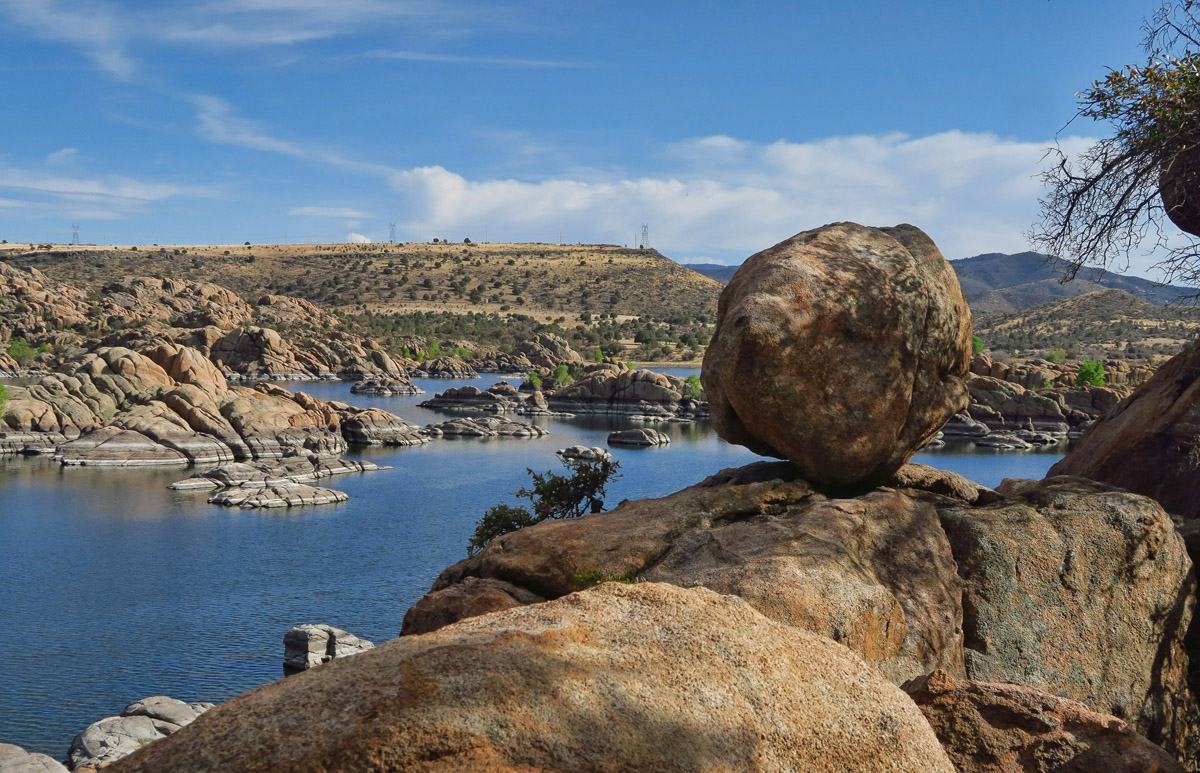 No visit to Prescott is complete without a hike around Watson Lake. 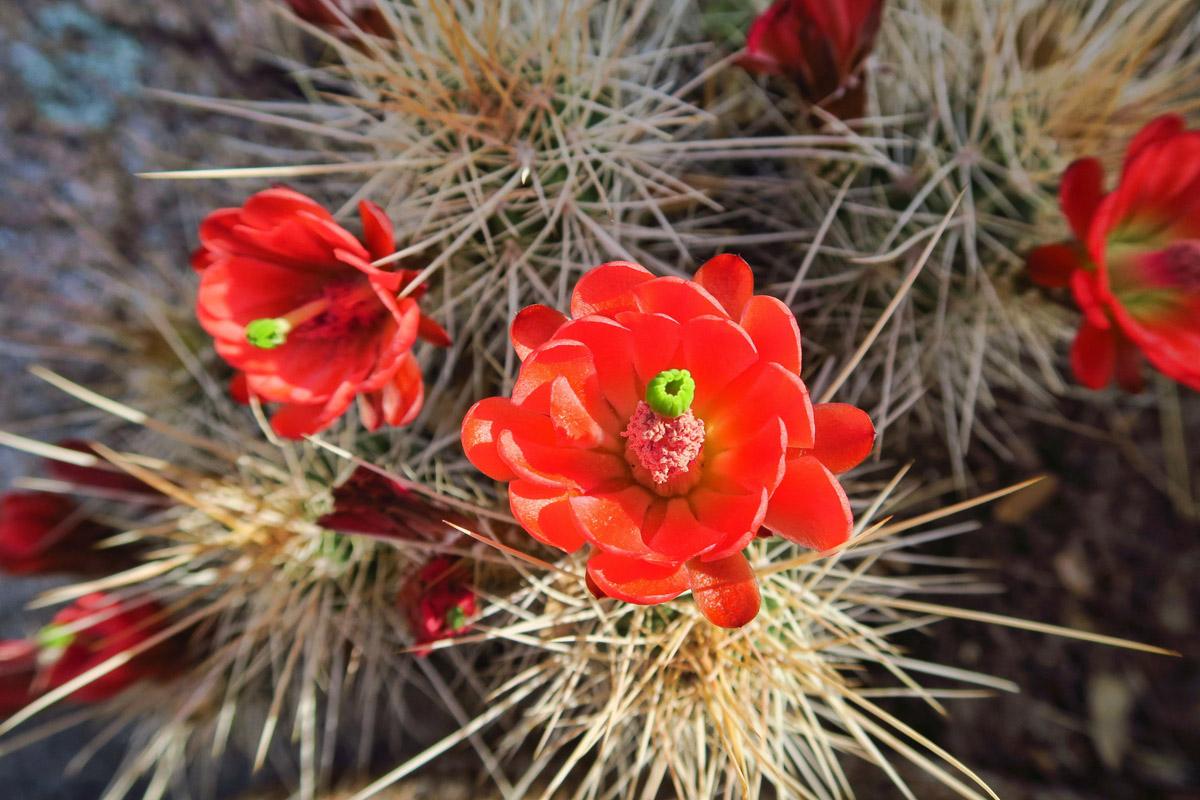 Beautiful Claret Cup cactus in bloom along the trail. 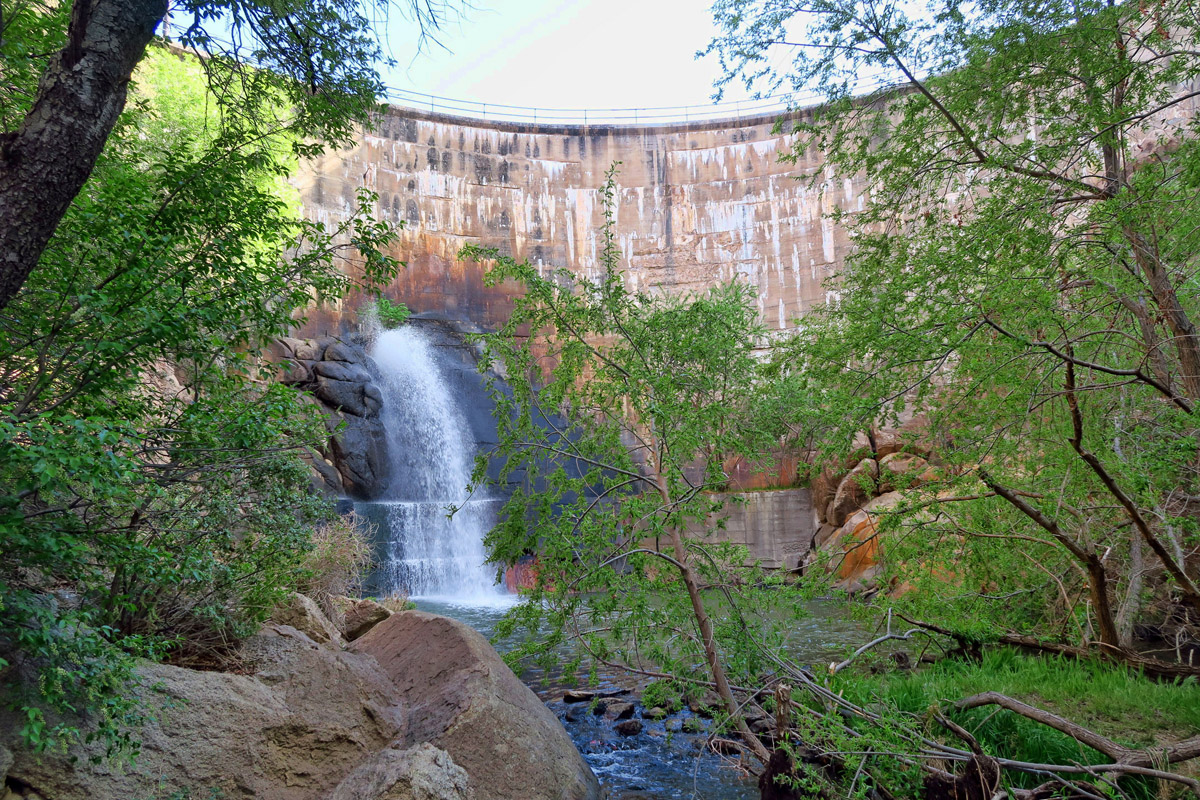 In case you ever wondered what the back side of the Watson Lake dam looks like…the front side of the dam is near surface level. 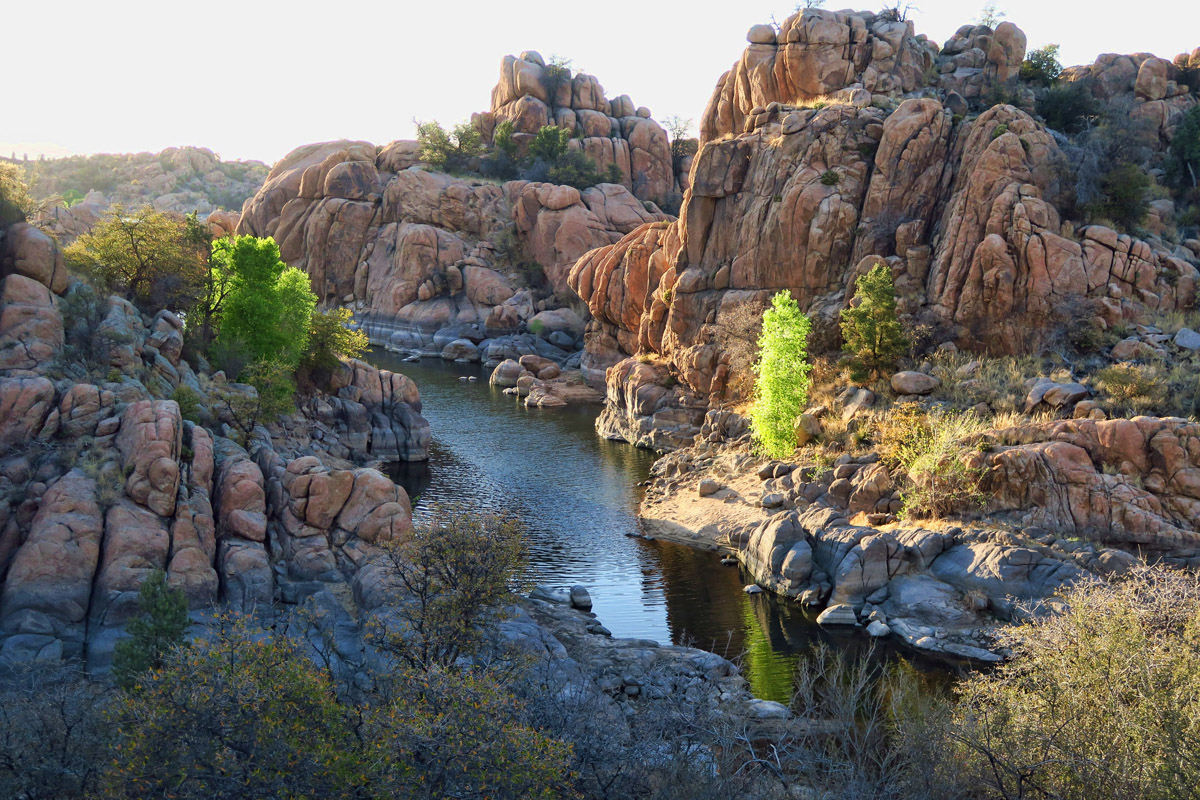 The trail around the lake leads to the Peavine Trail, a “rails to trails” route where you get more views of the Dells. Estimated to be 1.4 billion years old, they were formed by weathering of natural cracks in the granite.

But it’s not just RV full timers that have pegged Prescott as a contender for the perfect place.  EscapeHere listed Prescott in  its “Top Ten Places to Retire.”  These type “listicles,” list-based articles, are often the kiss of death in my opinion.  I have seen firsthand how quickly they can strip a town of its quaintness factor.  I have watched year over year the dramatic changes that San Miguel de Allende has undergone after both Conde Nast and Travel & Leisure cursed it with the title of “Best City in the World.”  Once the listicle hits the press, there’s no turning back as the hoards descend like locusts, eating up the housing market and local culture while spitting out overcrowded sidewalks and inflated prices.

I made my way through Prescott this spring not once, but twice. My first week was a
return visit to the Point of Rocks campground to meet up with long time “pen pals” Maureen and Eric, formerly known as bloggers “Two Scamps.” Maureen and I have been exchanging emails about our mutual love of international travel for over three years now, meanwhile I learn husband Eric and I went to the University of Texas in Austin during the same time period. So they feel like “my tribe,” and it was high time we met face to face. Every day during my week-long visit was spent on a beautiful hike, a delicious backyard BBQ, and sampling the best brews Prescott has to offer, all while comparing tales of wanderlust, past and future.

Maureen and Eric were full time RVers for eight years, but bought a “crash pad” within
walking distance of Willow Lake. Ask them, “Is Prescott the perfect place?” “It
depends”…just don’t ask on Senior Citizen discount day at the grocery store. 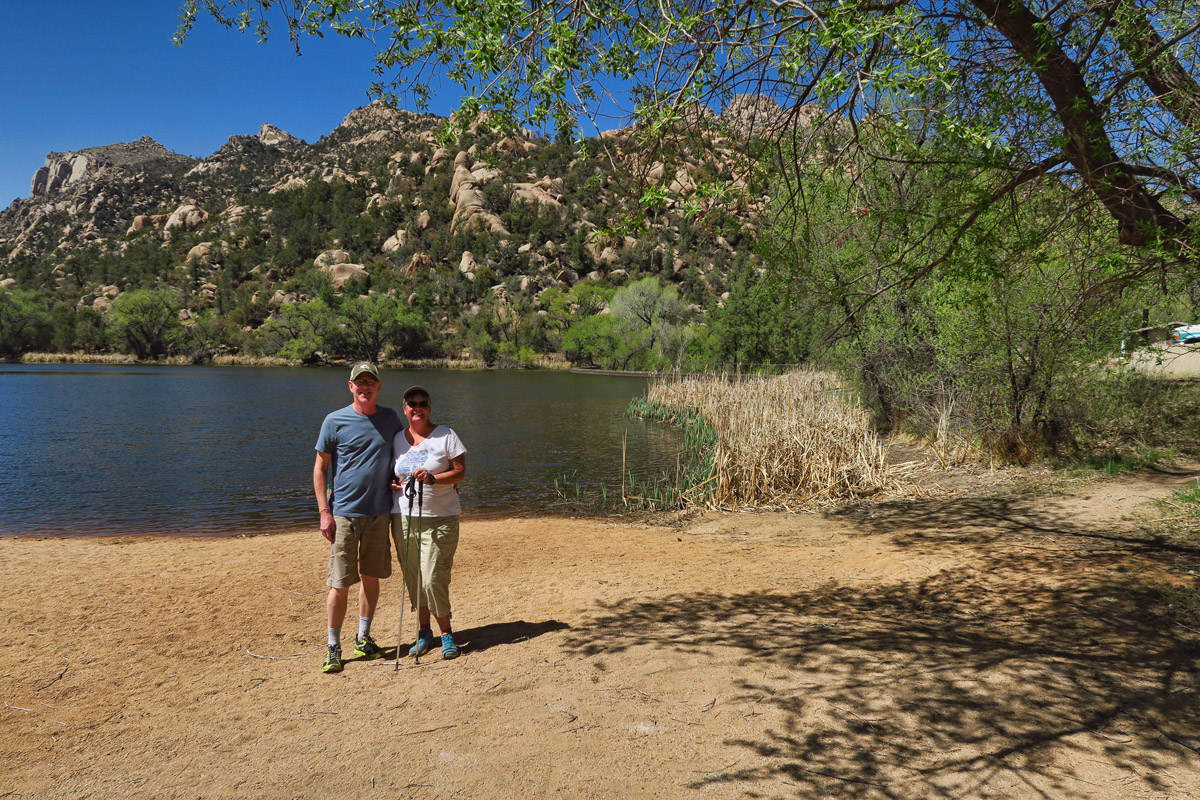 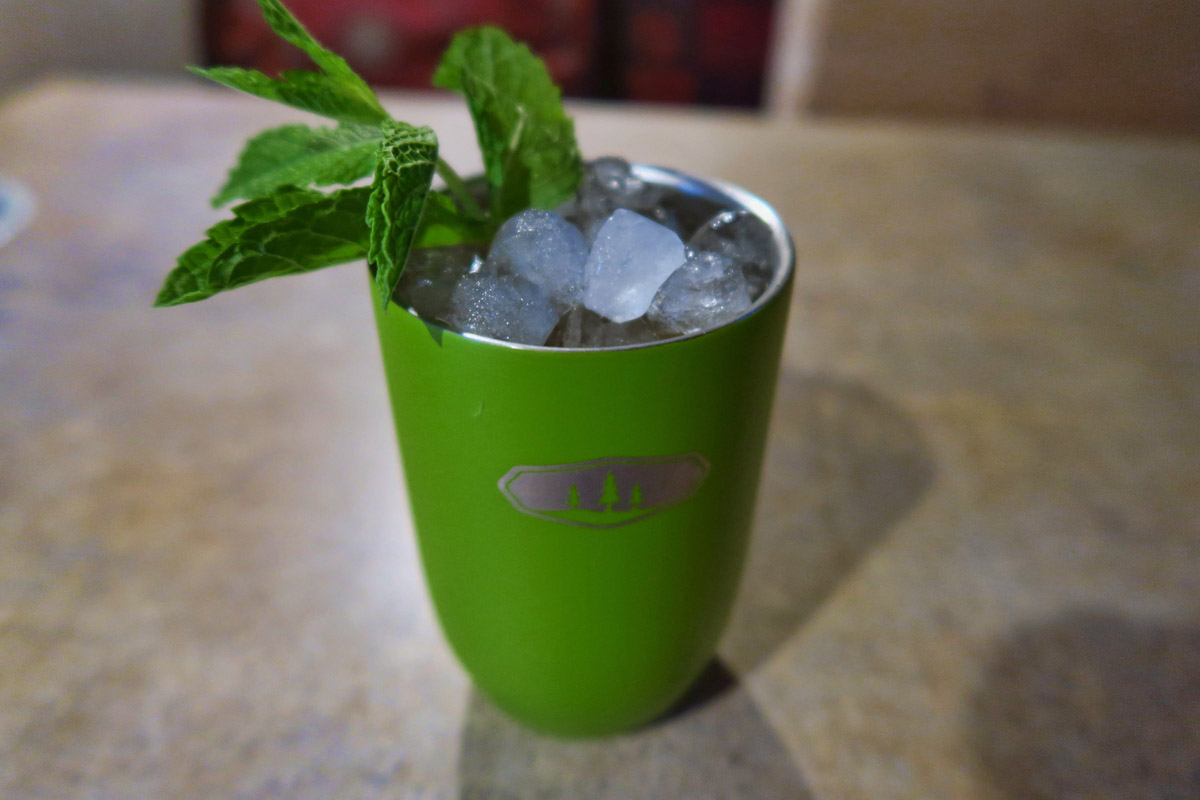 Maureen is my personal shopper. She has a knack of making me want the same gear she has…in this case, the cute little 8oz. insulated mug. I initiated it in celebration of the Kentucky Derby with the RVing version of a Mint Julep…stainless steel “mint julep mug,” Circle K crushed ice, fresh mint, simple syrup, and Woodford Reserve bourbon. 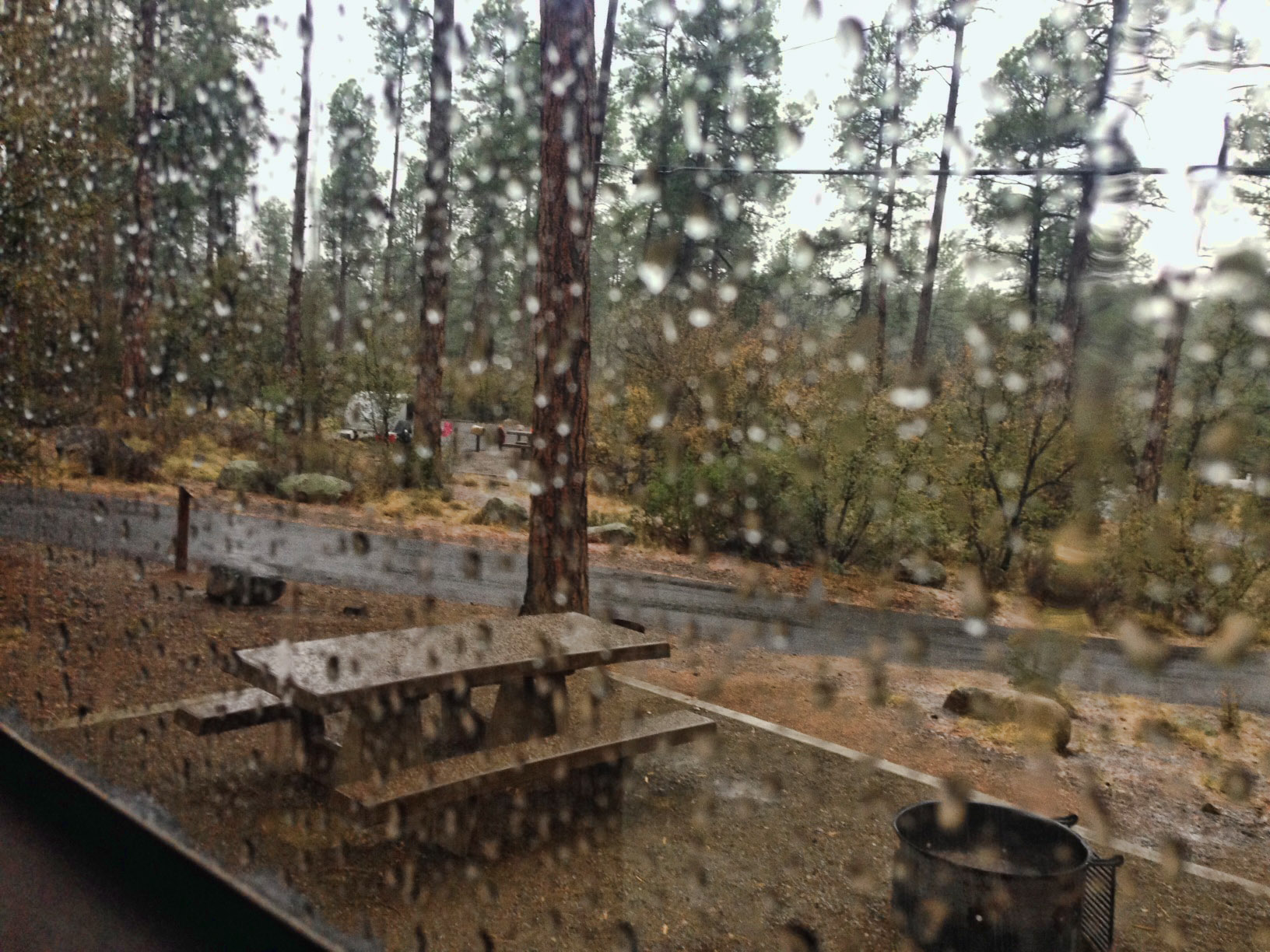 Lordy, it’s cold out there! Who knew I’d be wearing fleece in Arizona in May??

After a week in Sedona, I backtracked to Prescott to see good friends Jim and Gayle.
Although we keep in touch via email, I had not seen them since we went our separate ways in Joshua Tree NP back in March of 2016.   I had been carrying around a bottle of our favorite beer, Pugachev’s Barrel Roll No.3, for two years now, saving it to pop the cork next time we met up.  I am happy to report the Pugachev’s aged well…much better than I have.

More hikes.  More beers.  More Bill’s Pizza and Happy Hours at The Raven.  It was great catching up with them again.  Ask them, “Is Prescott the perfect place?”   “No, too many trees…” 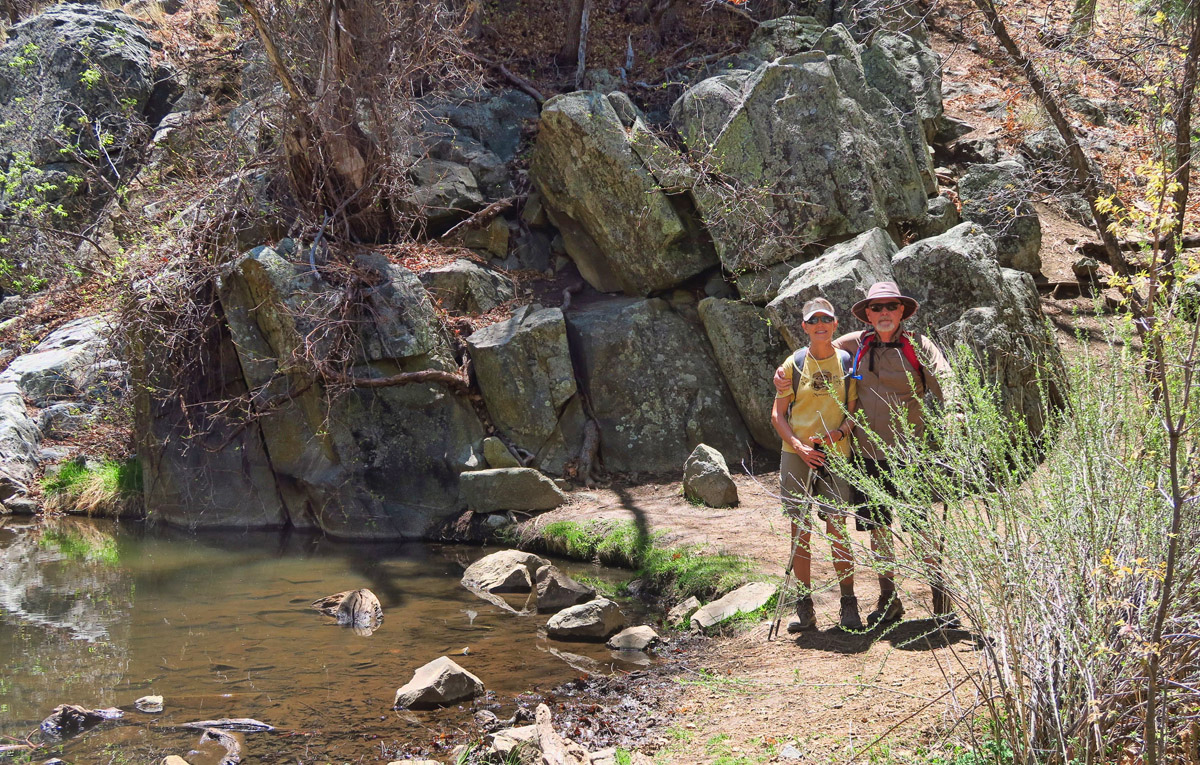 Little Adventurers Jim and Gayle. (I need to work on my photography skills and get them in FRONT of the bush next time!) 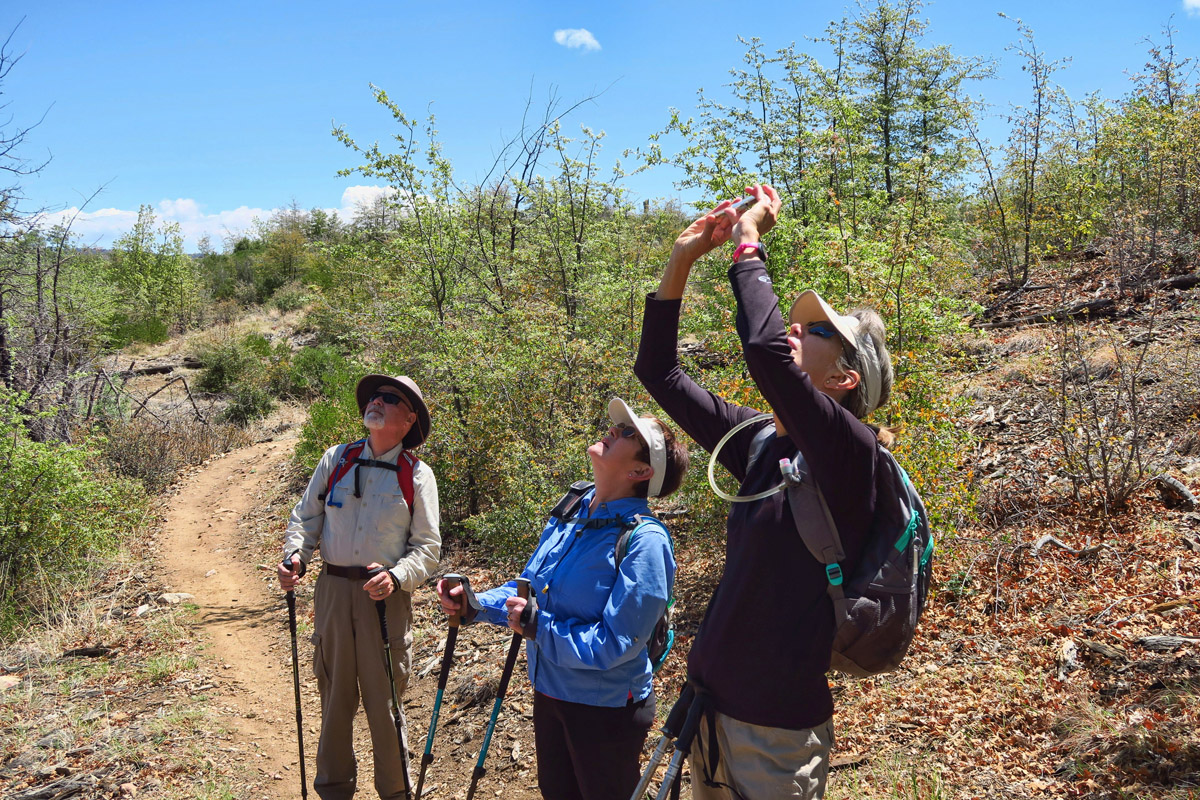 Hey, what’s everybody looking at? 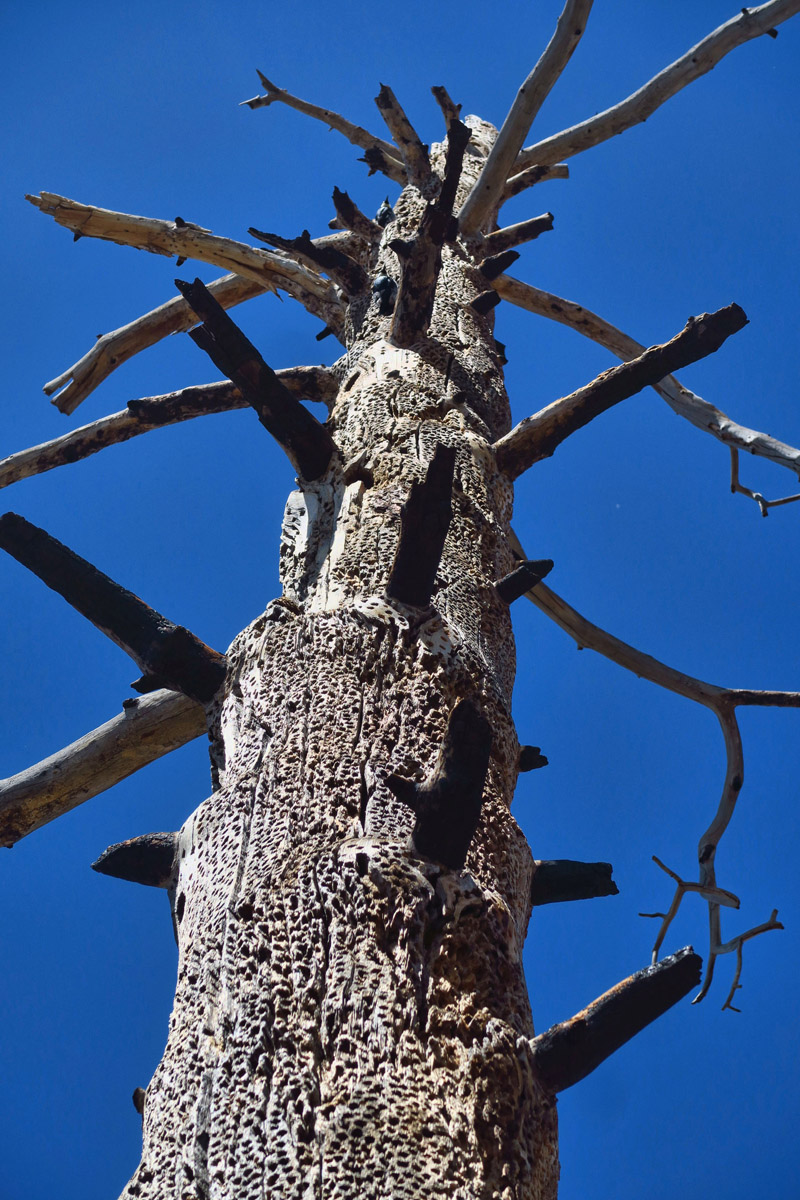 A very busy woodpecker! He’s way up there on the left. Wonder how long it took him and his tribemates to make this many holes?

Friends and fellow full timers and members of my other tribe, the Winnebago View/Navion cult happened to be passing through Prescott while I was there.  I met Ed and Marti this summer after shadowing them around Newfoundland and Labrador.  Although our iceberg cocktail ice is now long gone, we still met up to renew our mutual love of bourbon.   Ask Ed and Marti, “Is Prescott the perfect place?”  “It was once, but we are modifying our position.  Too crowded.”

I have no plans to come off the road any time soon.  But if I did, Prescott certainly ticks
a lot of the boxes.  It’s a town of manageable size.   Plenty of opportunities to get outdoors and enjoy all my favorite activities.  All the conveniences nearby such as Trader Joes, Sprouts, etc.  An abundance of good restaurants, cheap happy hours, and craft breweries.   But ask me, “Is Prescott the perfect place?”  “Nope. Too land-locked.” 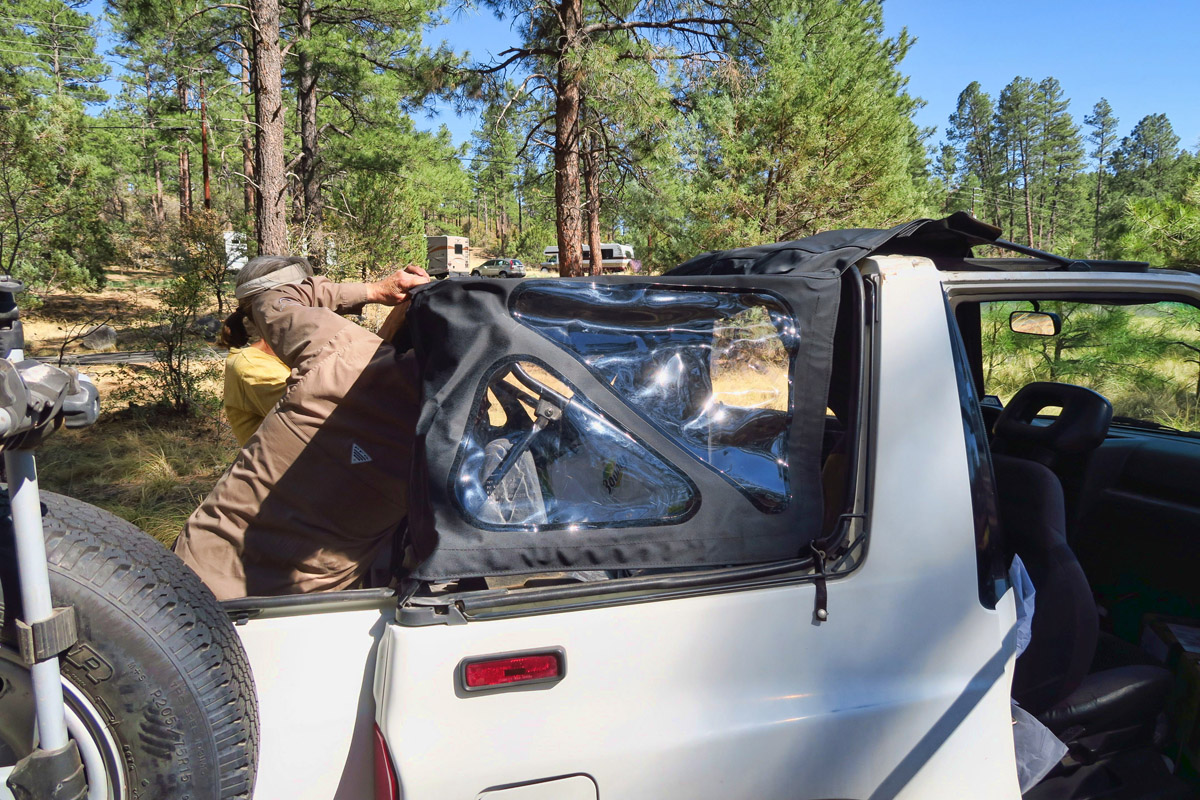 My little 1994 Tracker towed was way overdue for a new rag top. The zipper was completely trashed, and it was starting to leak. 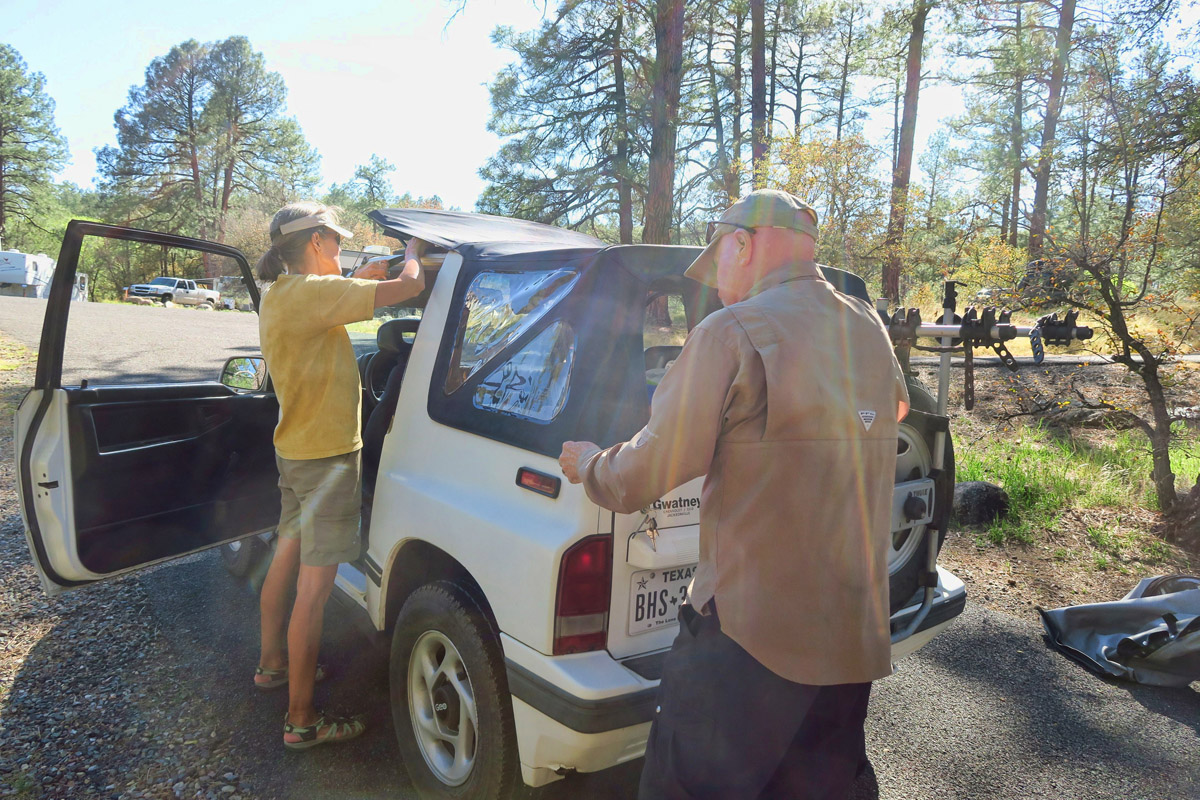 I’ve been carrying around a new one still in the box since I left Texas, but didn’t have the nerve to take the old one off unless “reinforcements” were nearby in case I could not get the new one back on. 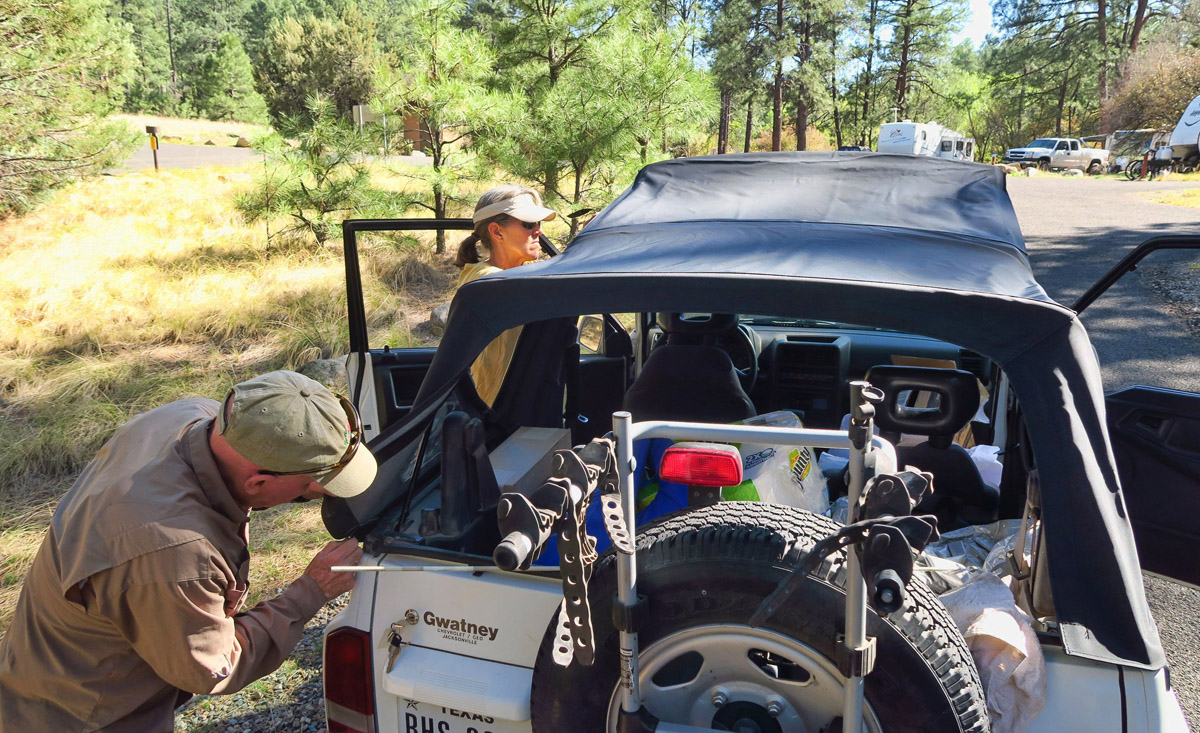 Jim and Gayle graciously offered to help me install the new “lid.” 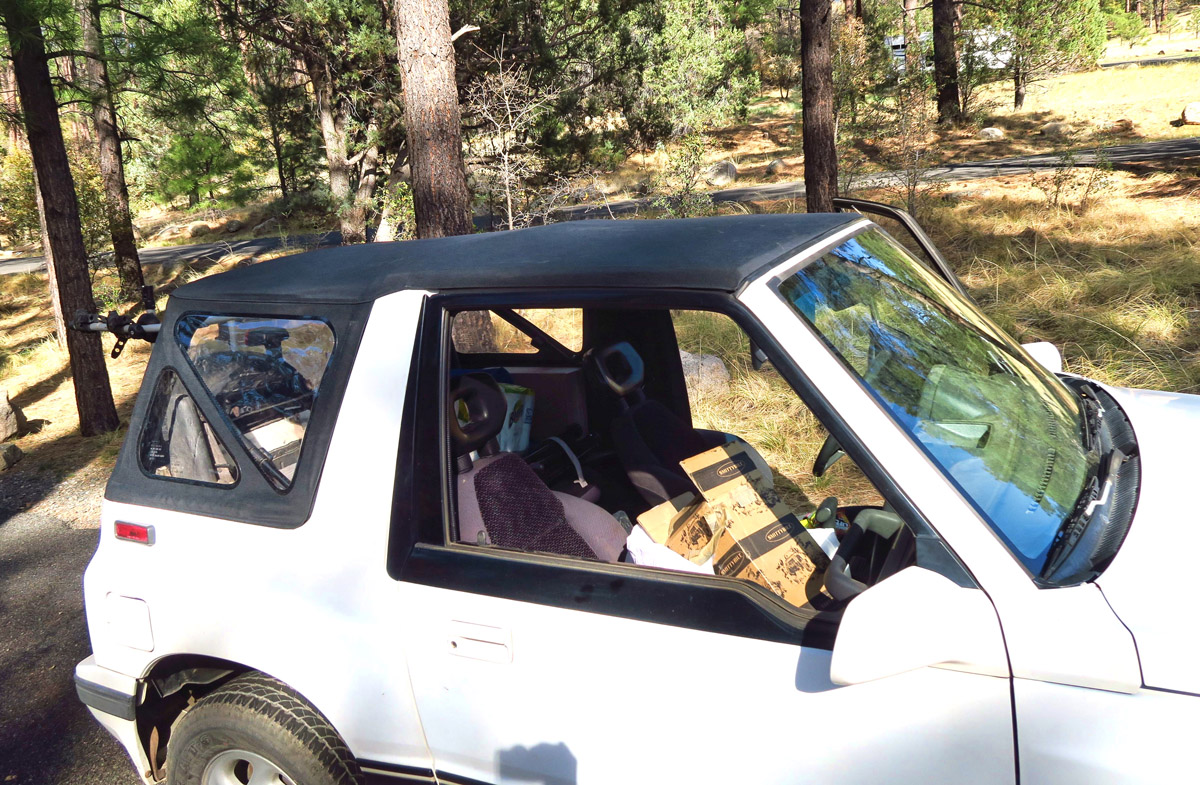 It’s a good thing there is no “Perfect Place,” just as there is no perfect RV…otherwise we full timers would all stop sampling, flock there to settle in, and it would be more crowded than a June campground in Yosemite.   As I always say, “Some like Vanilla, some like Rocky Road,” and thank goodness there is variety.  For now, I’ll continue to sample all 31 flavors…

14 thoughts on “Is Prescott the Perfect Place?”