Imagine, if you will, lying on the most idyllic, secluded beach. Crescent in a shape reminiscent of the thumbnail of a new moon. Flanked on both sides by lush, verdant green cliffs. 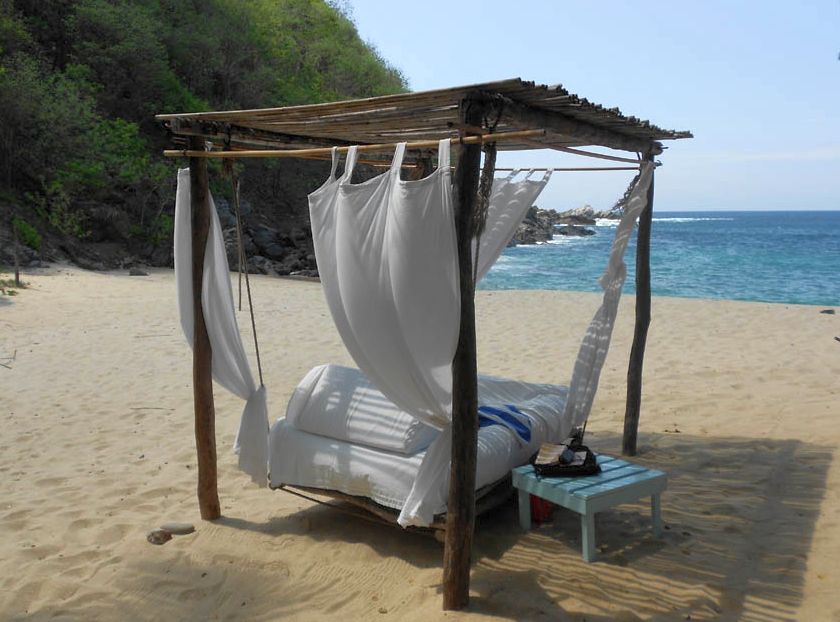 You have an exclusive on the beach “swing bed,” a full size mattress covered in crisp clean white sheets and surrounded on all four sides by  billowy white sheer curtains fluttering in the salty sea air.  You are swinging, gently, suspended on all four corners by rope, swaying in with the breeze in a sleep-inducing rhythm.  The waves are crashing on the rocks nearby, then rushing to a gentle whisper as they tumble to shore. The sand feels powdery soft like sugar between your toes, dangling carefree from the side of the bed.

Such is the beautiful setting at little Bahia de la Luna on the Pacific coast of Mexico. 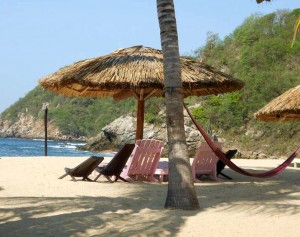 You are the only two guests in the entire resort, so you are basking in the solitude and serenity, when you look up to see the chef, Jorge, approaching.   You figure it is a little early yet, but this is just his typical stroll down to the beach to ask you about your choice for dinner, “Something from the earth, or something fresh from the sea?  Perhaps a little pasta in garlic wine sauce made with fresh octopus that we plucked fresh from the ocean this morning?” 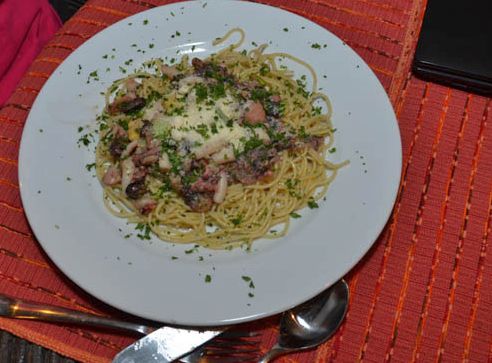 But no. Something seems different this time. Not quite right.  Jorge, the chef, is not wearing his chef hat.  Nor is he wearing his usual smile.

You see his lips moving.  You hear the words, yet you cannot make yourself believe them.  Is this a bad dream??

“I am sorry to tell you that there is a hurricane out there, headed straight this way.  I am here to discuss your options for evacuation.”

ZZZZZRRRRRRIIIPPPP!!!!!  (the sound of a needle scratching across a vinyl record)

As you can imagine, this didn’t go down well.  The sun was shining.  The sea was calmer than it had been since we arrived.  How could this be?  I could not make myself believe it, until I booted up my laptop and signed on to NOAA and saw the tracking with my very own eyes……there she was….pointed straight for Puerto Angel, three miles from my beach bed! 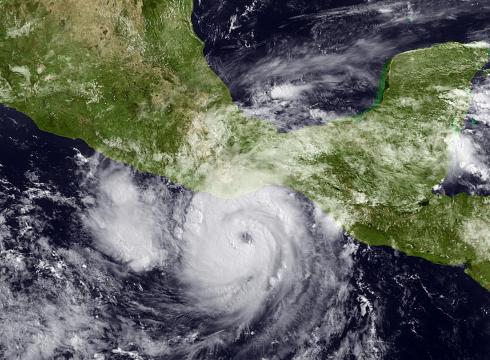 There was lots of heated discussion between Don and me.  He was ready to go.  Truth be known, after two weeks of diarrhea and dehydration, I suspect he was more than ready to head for the cooler temperatures of the mountains of Chiapas.   But not 30 minutes before Jorge’s news, I had just proclaimed to Don, “I ain’t ever leaving here….ever!”

You see, not only was Bahia de la Luna the perfect hideaway, but we had been through what felt like the gates of hell to get there.  We were hauling way too much luggage, as I mentioned, but we had just come down six hours of mountain switchbacks where the warning signs “Curvas Peligrosos” and “Sinuoso” (dangerous curves) were a gross understatement. 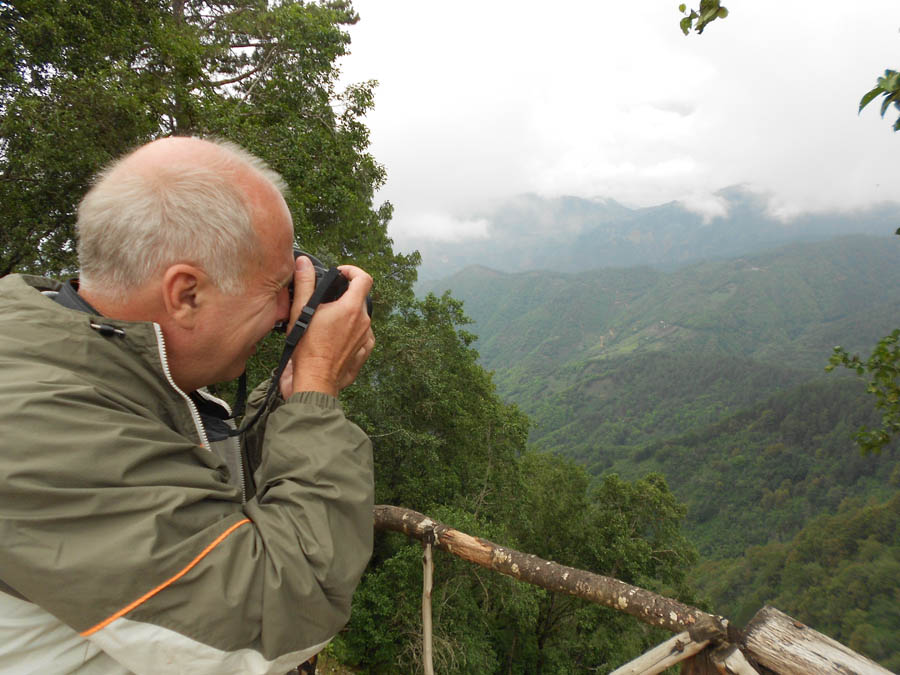 It was chilly up there!!

The scenery was breathtaking as we climbed up and over the moutains leaving Oaxaca. 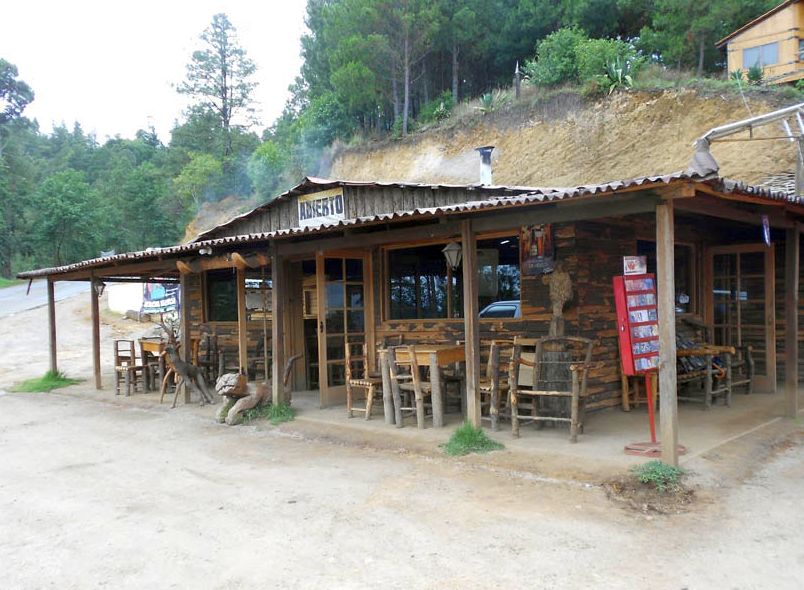 Our lunch stop, high on a mountain pass. Hot chocolate by the fire!

Suffice it to say, two thirds down the mountain, all I saw of Don was his butt in the window, as the upper part of his body was hanging out, hurling in the ditch! The driver was going so fast around the hairpin curves that it took both arms and legs braced against the seats to keep myself from flying all over the van. 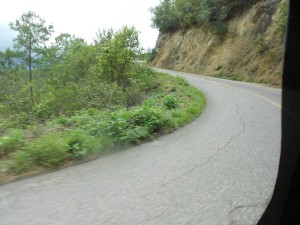 Pictures cannot convey what a wild ride this was!

Once we reached Potchutla, Don collected himself and like two contestants on The Amazing Race, we found a taxi driver who would take us and all our luggage for another five miles of ruts and pot holes big enough to swallow our cab.  We both feared that any minute, our taxi driver would kick us out and turn back.   So it took me some time to settle in, but once I was there, I was firmly planted. 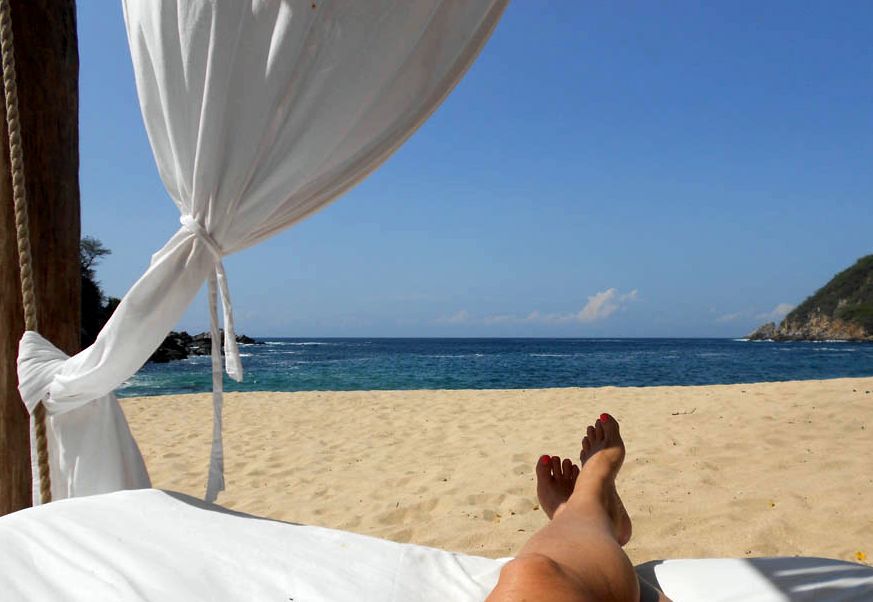 But eventually “cooler heads prevailed,” and after a few choice sibling spats, we were on our way to San Cristobal de las Casas.  Not in the same bus, mind you, but at least headed in the same direction.  😉

It was a good thing we left when we did, as buses were filling up with locals trying to evacuate.  Unfortunately 24 hours later, Hurricane Carlotta made landfall just outside of Puerto Angel, resulting in a tragic loss of lives due to severe mudslides.

Sadly, still no news from the beautiful little Bahia… 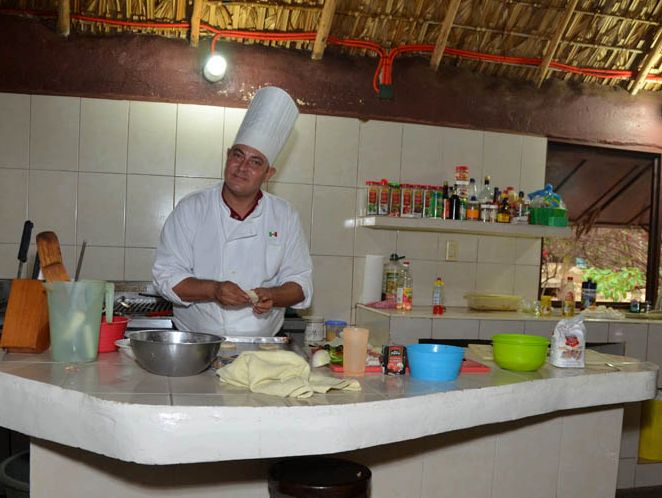