The internet is such a blessing and a curse. I can’t bear to think back on how hard it was to make travel arrangements back in the “olden days” before the likes of Trip Advisor, Frommers, and a few dozen blogger opinions on every destination under the UN.  As an ex-travel agent, I have no desire to return to the days of the OAG and waiting on hold for the airlines while hand-writing tickets.

However, the speed at which popular travel destinations can now become “too popular” can certainly kill a good “discovery buzz” in a hurry. The instant fame that comes about from making Trip Advisor or Conde Nast’s “Top 10 Secret Getaways” list can cause what feels like a veritable stampede to be the first, the best, the greatest, the most “extreme” on the scene.  I read about blogs that generate an honest living out of revealing the “yet to be discovered hot spot.” (I wish I were partly to blame for letting the cat out of the bag, but I keep my reader audience numbers low for just this reason. haha!!) 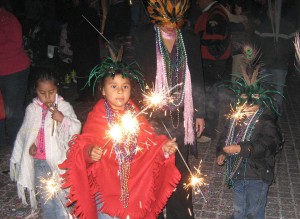 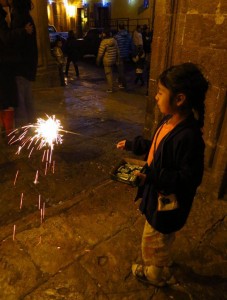 This was my third New Years Eve spent in the Plaza of San Miguel under the perfectly trimmed, symmetrical trees in the Jardin. My first experience was in 2008, then again in 2010. I quickly came to admire and appreciate the quaint innocence of the small community coming together, the aged, the expats, and the littlest just learning to walk, all coming together to see in the new year. 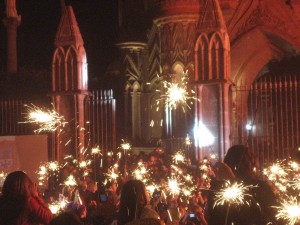 By far, my favorite moment of the celebration was as the countdown began. Suddenly, across the assembly of townspeople, one by one you would see the giant 3 ft long sparklers being ignited, one being lit from the next, until the entire crowd was aglow under a shower of golden “falling stars,” awaiting the fireworks display to mark the stroke of midnight. Afterwards, there was dancing, merriment, street food, accompanied by shouts of “Feliz Ano!” well into the night. 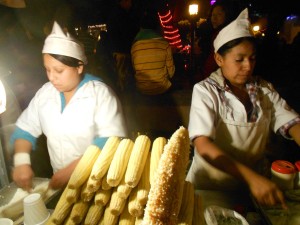 It didn’t take long to realize as we approached the Plaza this year that something had dramatically changed. As we rounded the corner, there was a serious booming coming from massive speakers as tall as a house. There was a live “sound stage” where there was once a makeshift dance floor. And the crowds were so thick that we could not get anywhere near the Parroquia where the fireworks had always launched. To dance in the square would have resembled a “mosh pit.” To light a three foot sparkler in this crowd would mean setting at least six heads of hair on fire! 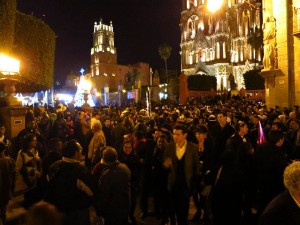 Yes, it would appear, our little San Miguel has been “discovered!”  And lost it’s innocence in the process. 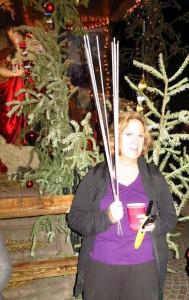 I am nothing, if not “prepared!”

I am not so naive not to realize people said the same about me and my family as we barged on the scene back in 2008 to be in the thick of their family traditions. But it just gave me pause for one moment to appreciate things RIGHT NOW, just as  they are, because they are stolen moments in time in a world so rapidly shrinking, where today’s family hideaway is tomorrow’s headline!

“Don’t it always seem to go….that you don’t know what you got till it’s gone…” — Joni Mitchell