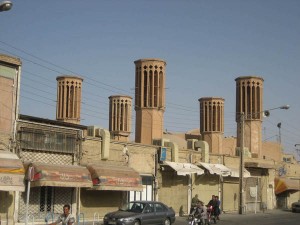 The next morning, we were up early headed for Yazd, considered by some to be “the oldest living city on earth,” inhabited over 7,000 years ago and one of the principle trade routes along the Silk Road.  The old part of town was made up of a maze of winding lanes through mud brick buildings, many of them topped by “badgirs,” or wind towers constructed on the rooftops to capture the wind — nature’s own air conditioner! 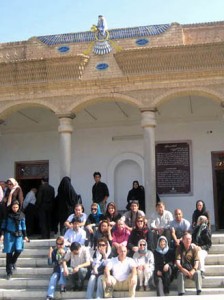 Our friends from the caravanseri at the Zoroastrian Temple

Yazd contains the largest concentration of Zoroastrians, the ancient religion that was later replaced by Islam.   Our first stop would be the Zoroastrian Fire Temple, which contains an eternal flame that has reportedly been burning since 470 AD.   As we walked through the gate, we ran face to face with the wild ladies from the night before, yelling, whistling, and waiving, leaving us feeling a little like “the morning after.”  It took forever to get away from there, because they all wanted to pose for photos with our group, so our poor guide just finally gave up any hope of “crowd control.”   The closest I will ever come to feeling like a rock star! 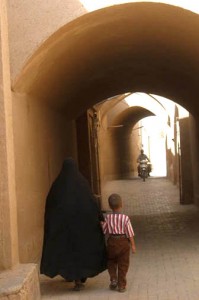 Our one day in Yazd was spent getting lost in the winding streets, taking hundreds of photos, touring more mosques, more bazaars, more kababs in more tea houses, and still I was not tired of it all.    But alas, all good things must come to an end, as we boarded our flight bound for Tehran.   The two separate security screening areas for men and women always struck me as peculiar, but not nearly as peculiar as hearing “America the Beautiful” playing over the intercom at the Kerman airport.

Now at the end of the organized tour, our group went for a farewell dinner at a cute little courtyard restaurant near the Englehab hotel.   We each tried to narrow down to our favorite part of the trip which proved to be impossible to pick just one, as every day had been such a rich cultural experience.   We shared lots of laughs, then came back to the hotel for an “unveiling,” as we all went up to one of the hotel rooms and one by one stripped off our headscarves so each could see for the first time what the other looked like with HAIR!   Then we made the guys all put on headscarves to see what it felt like for the last fourteen days with a yard of fabric wound tightly around our heads in the scorching desert heat!! 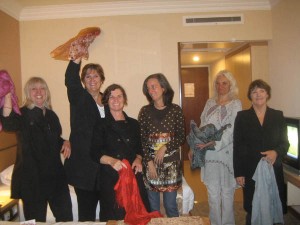 The unveiling, or first time we had seen each other's hair!

The next day, I boarded a Lufthansa flight bound for Frankfurt.   As soon as the plane lifted off with the announcement that we had reached our cruising altitude, now in international air space, I ripped off my headscarf, shook out my hair, and ordered my first glass of red wine in two weeks.   As I savored the deep red, aromatic glass of red swirling beneath my nostrils, I pondered this very symbolic celebration of freedom, which tasted sweeter than the wine itself. 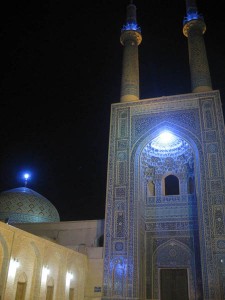 Every moment in Iran was a phenomenal experience that I hope I never forget.   In the end, the architecture, the history, the food all far exceeded my expectations.   But the part that touched my heart was the overwhelming outpouring of hospitality from the Iranian people who said time and time again, “I hope our countries can be friends.”     I hope so too….”Inshallah…”

On the way through the desert, we stopped at a 400-year old Caravanserai “Zein–o-din,” out in the middle of absolute nowhere.   About halfway there, the caravanserai which typically prepares dinner upon request called our guide to inform him that they were expecting a large group for dinner, and they did not have enough plates and flatware to serve everyone so we were on our own for dinner.  END_OF_DOCUMENT_TOKEN_TO_BE_REPLACED

Kerman would be southernmost turnaround point of our tour before heading back north.  Now closer to the Pakistani border, the clothing styles began to change.  Many of the men wore what looked like a long, knee length night shirt over same color baggy pants.  I didn’t notice a change in the women’s styles, though as it still ranged between the all black chador head to toe, to the short, tight manteaus (knee-length coats) with the sleeves and hems creeping dangerously shorter. END_OF_DOCUMENT_TOKEN_TO_BE_REPLACED

The Pars International hotel in Shiraz has wireless internet. Don’t have a laptop? No problem! They will deliver a loaner to your room for a rate of 10,000 Rials, about a buck an hour! I have been walking non-stop since early this morning. Being able to prop my feet up while emailing from the room? Priceless! END_OF_DOCUMENT_TOKEN_TO_BE_REPLACED

We have been traveling at a pretty fast and furious pace, getting up at unholy hours of the morning for flights and bus trips.  The last three days are a blur, but the consistent impression that repeatedly blows me away is the warm hospitality of the Iranian people.   You can hardly walk through the streets without being stopped every five minutes for a lively conversation. END_OF_DOCUMENT_TOKEN_TO_BE_REPLACED

As the plane descended over the late night lights of Tehran, I kept thinking of the lead-in passage in Rick Steves book when the pilot announced, “This plane is going to Tehran,” and nobody flinched! It was a packed plane, and immediately after the “raise your tray table” announcements followed “by decree of Islamic law, all women are to cover their heads prior to leaving the aircraft.” As the tray tables went up, so did the headscarves in unison. END_OF_DOCUMENT_TOKEN_TO_BE_REPLACED