When I recently announced to my well meaning friends that I was headed to Nicaragua for my next vacation, the reaction was unanimous:  “Are you crazy?  A single woman traveling alone?  Don’t you know there is a war down there?!  Are you smuggling arms or something?”  Never mind my reassurances that the war ended 20 years ago and Nicaragua now has the lowest crime rate of all of Central America, I still faced raised eyebrows and quizzical looks, followed by the same question each time, “Of all places, why Nicaragua?” 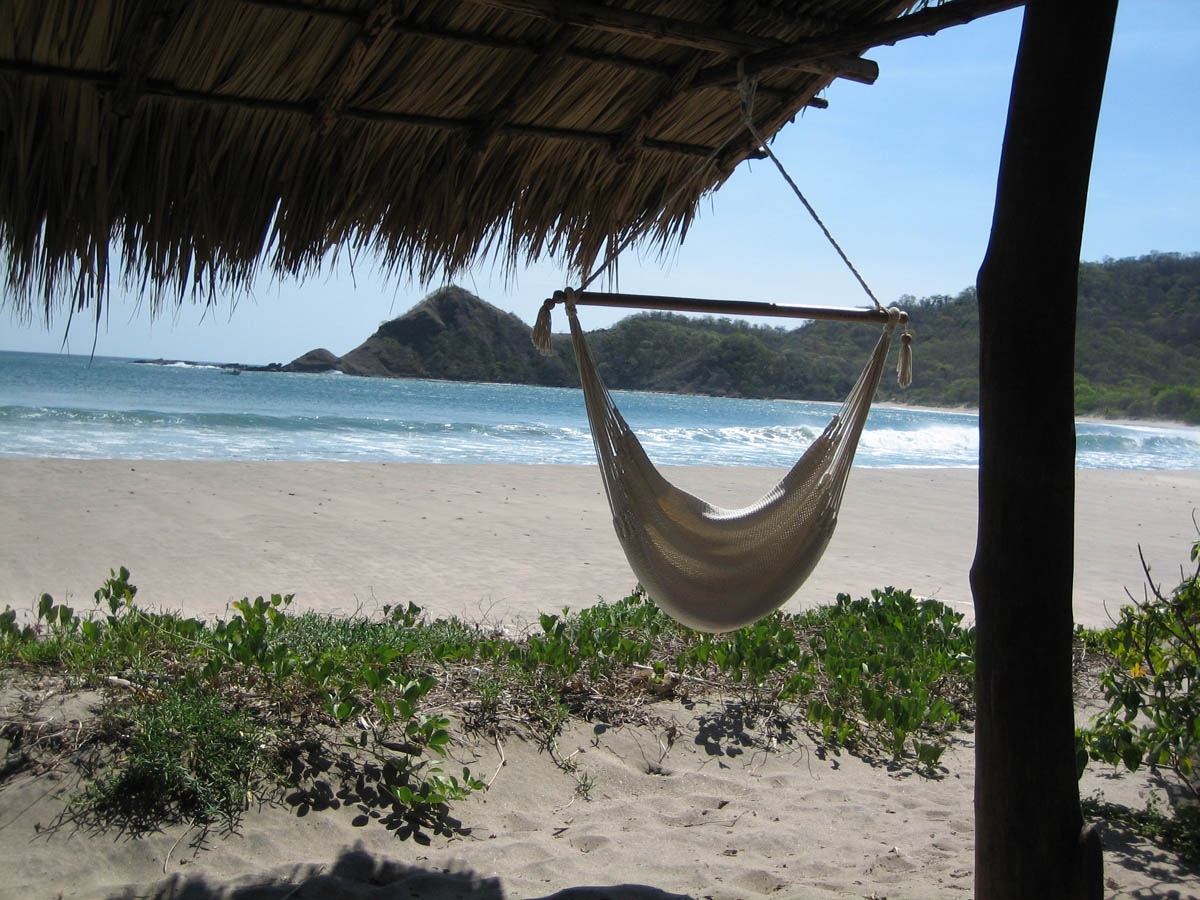 The idea to visit Nicaragua first came two years ago while vacationing in Belize. During a dinner conversation at Caves Branch, a well established Belize ecolodge, I asked the owner, an expatriated Brit how he got out in front of the tourism boom that has now enveloped Belize and Costa Rica. “If you were starting over today, where would you build the next undiscovered hot spot?” I asked. Like the advice given to Benjamin in the movie The Graduate, he put down his Belkin beer, lowered his voice as he glanced from side to side, then leaned across the table and looked me straight in the eye. In a low whisper, he answered, “I’ve got one word for you; Nicaragua! Ever since that day, the thought of traveling to a destination before it was featured on the front page of the travel magazine on my coffee table has intrigued me. 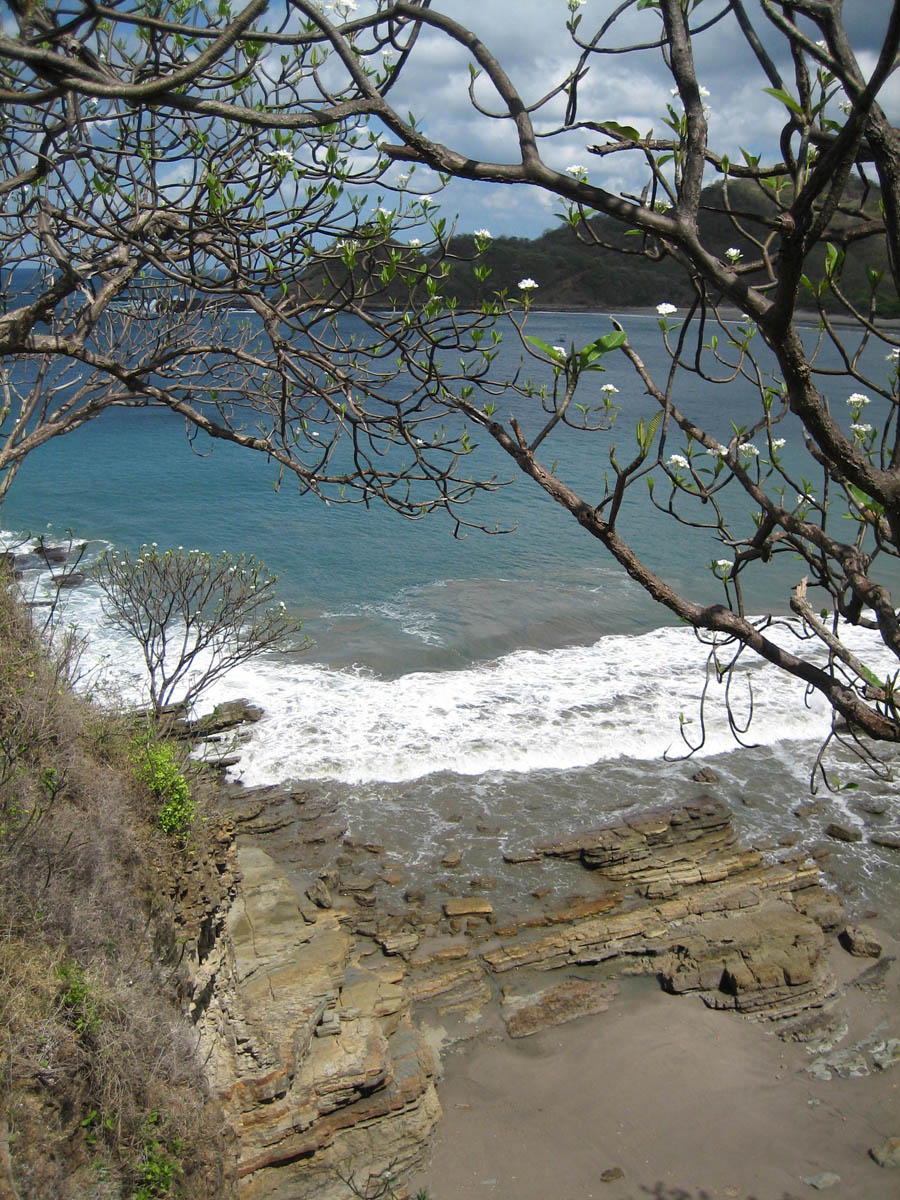 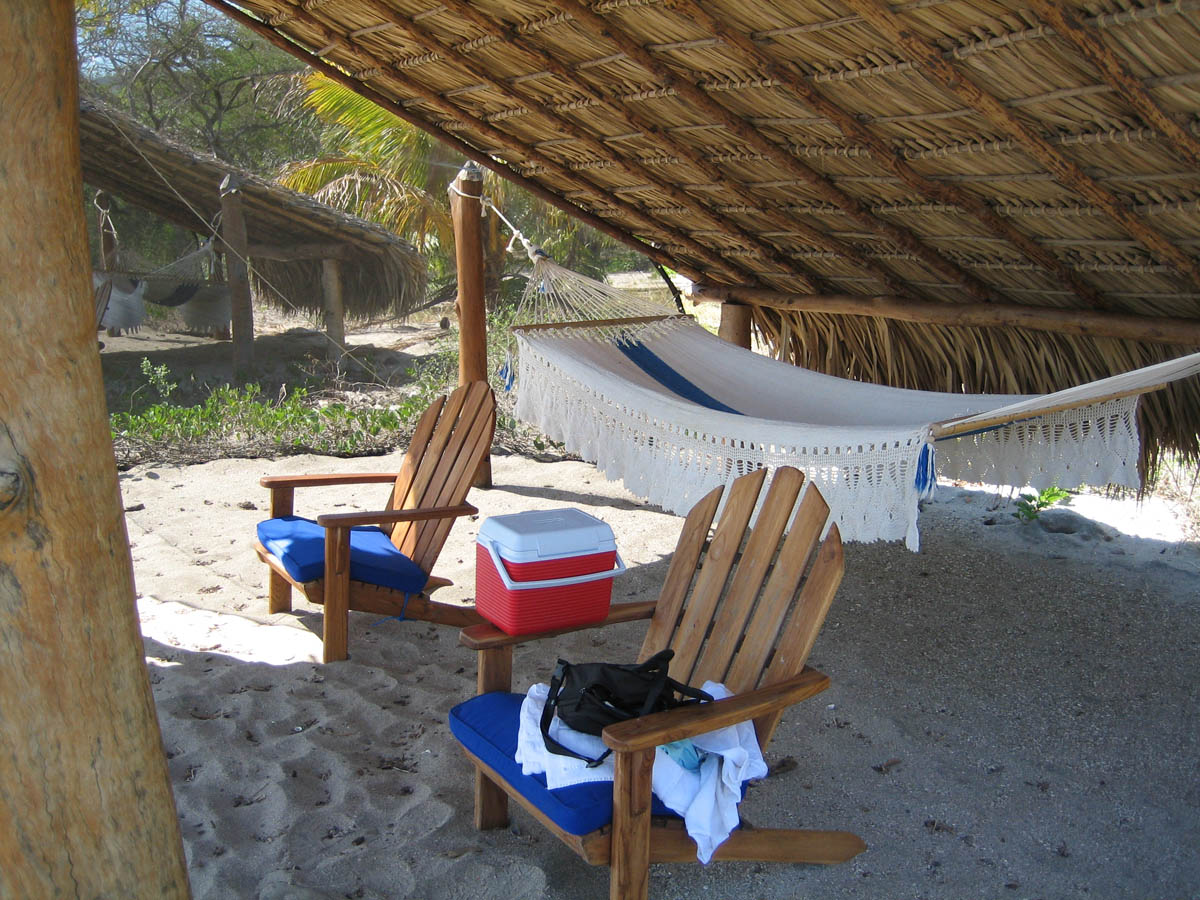 So here I am, sitting in the open-air restaurant under a thatched roof overlooking a pool which hangs out over the ocean with hilltops in the backdrop.   I just finished a typical Nicaraguan breakfast of “Nicatamales,” similar to a tamale in a banana leaf, chased with passion fruit juice and the best coffee I have ever tasted.  There are three white butterflies playing in the hibiscus bush below me and a yellow bird drinking from the chlorine-free pool.  The sound of the ocean crashing into the rocks alongside the mile-long stretch of beach can be heard just as succinctly and hypnotically from my king sized bed in Bungalow #11 as it can from the beachside restaurant.  It is a scene so beautiful and restful that I don’t want to take my eyes off of it to read or write, don’t want to listen to my book on my ipod because the sounds and the scenery are so much more appealing. 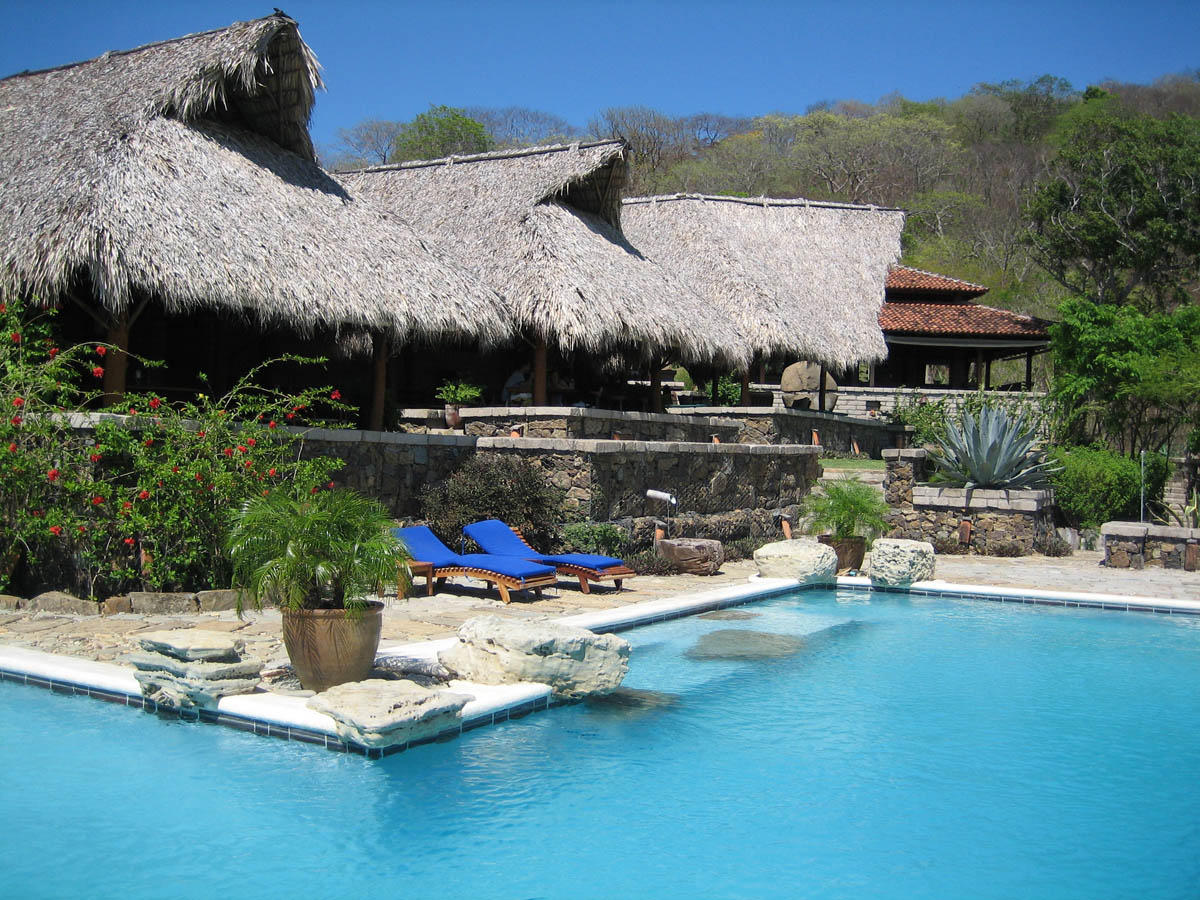 This is Morgan’s Rock, reached after half an hour drive down a long, dusty, pot-holed rutted road, where you come to a guard station and a long fence.   You would think the resort would lie just beyond that fence, but not so.  It is still another 10 minute drive through the “dry forest” winding down a rough, rutted road through the trees and shrub, very thick but brown from the dry season.

Finally after a couple of wrong turns and my insistence that my taxi driver was wrong (he wasn’t) we reached a sign for the reception area, where we turned in to be greeted by two khaki-clad young women holding a tray of “Jamaica tea,” a dark red refreshing tea over ice with a slice of lime. 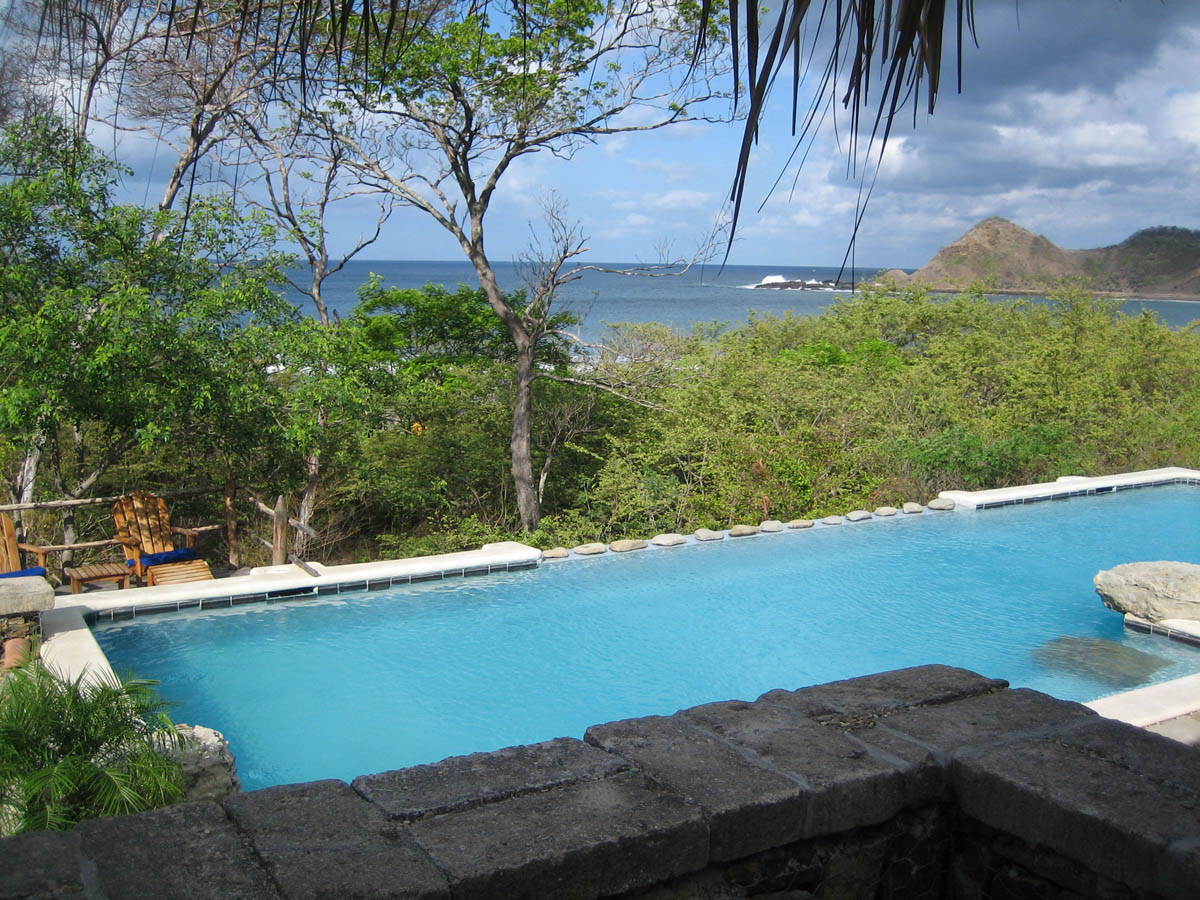 After a tour of the common area, reading lounge with shelves of books, bar, and open-air dining area overlooking the pool, it was time to hike across the long narrow suspension bridge, up the many stair steps to my bungalow cleverly positioned in the jungle thicket to maximize privacy. 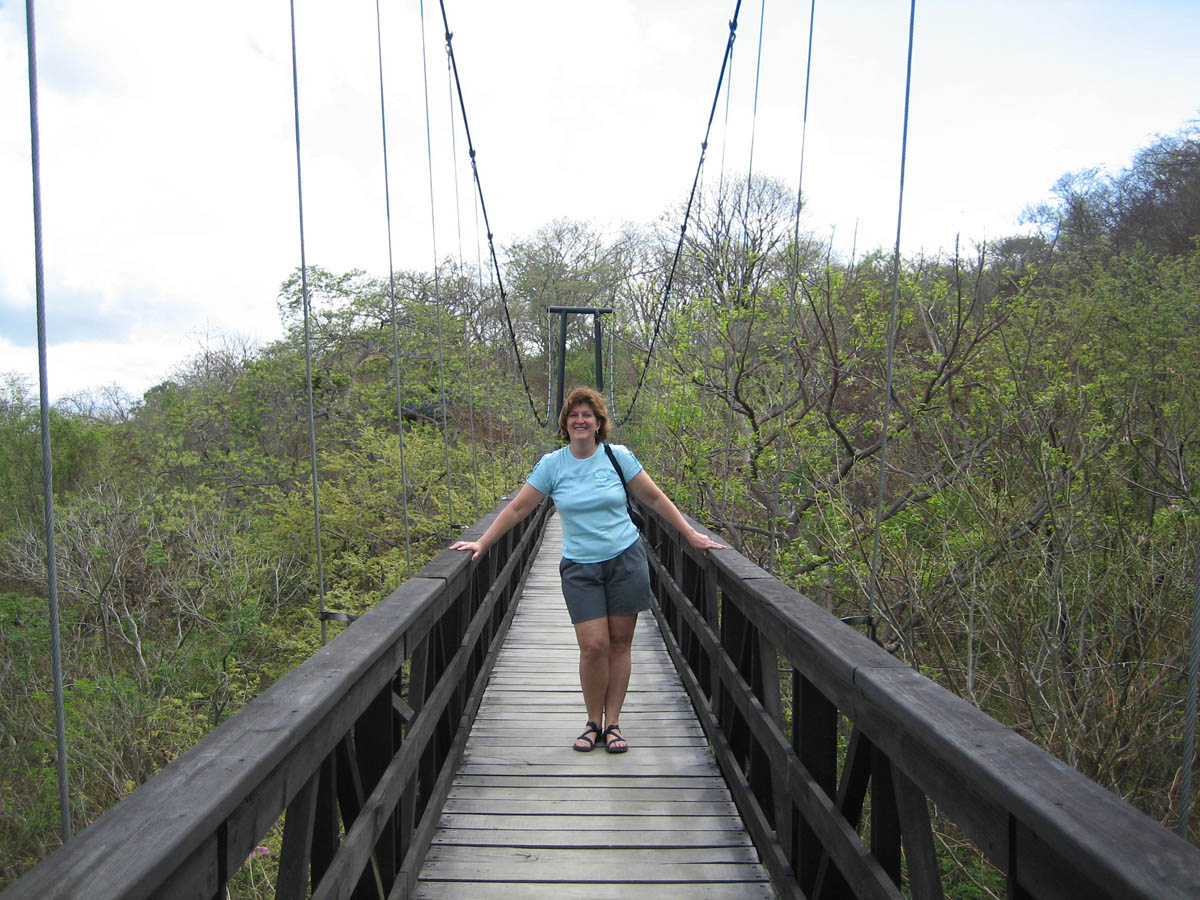 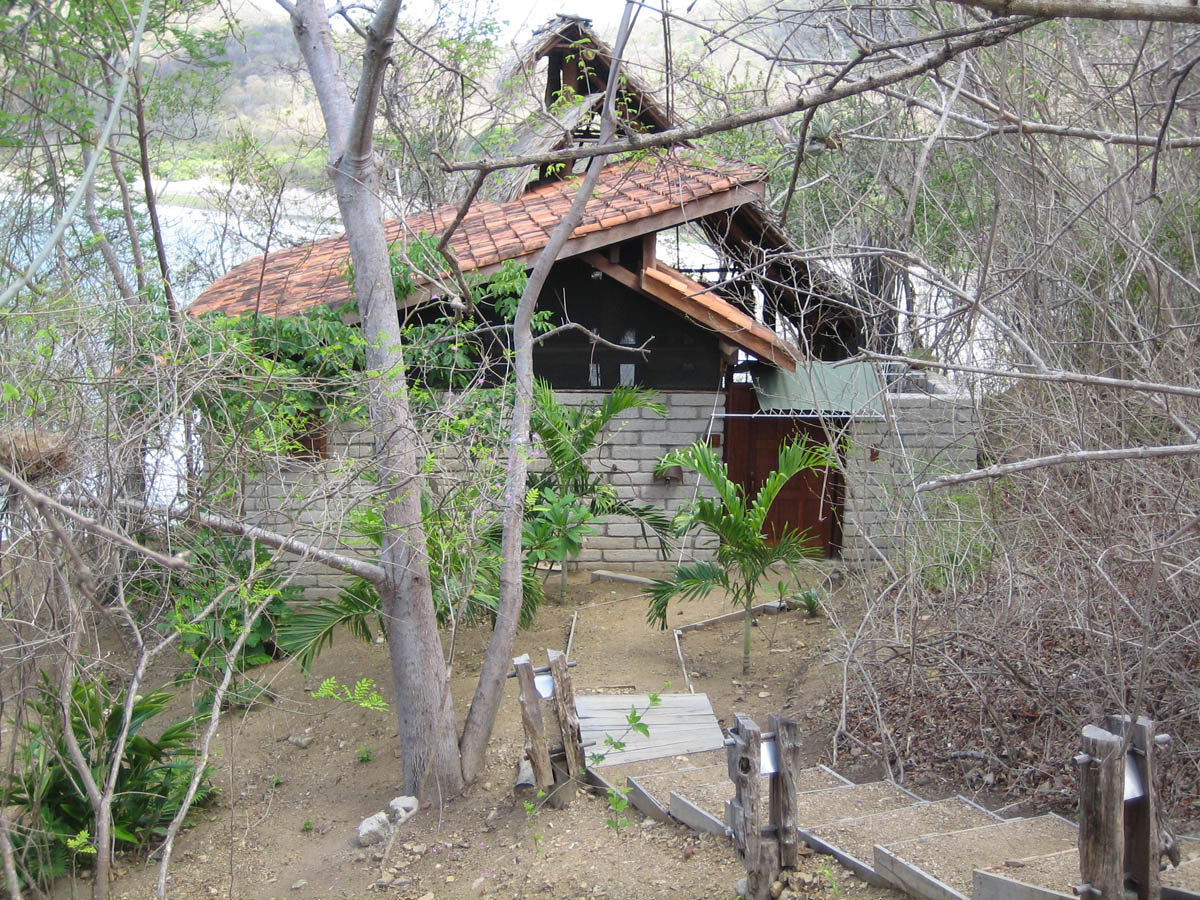 The rooms are all positioned on the side of the cliff, each overlooking the crescent-shaped beach and ocean below.   They all have individual lighted path leading to a large heavy wooden door, locked by a universal “key” which merely blocks or unblocks the inside latch.   On the left side of the entryway is a stone outdoor shower with rain shower head, coiled copper tubing, and hibiscus and ferns.  Straight ahead is the outdoor deck, complete with a full sized “swinging bed” suspended from the rafters by giant ropes, overlooking the most fabulous view.  Of all the bungalows, #11 appears to jut out further toward the point out over the ocean, affording the illusion of complete privacy. 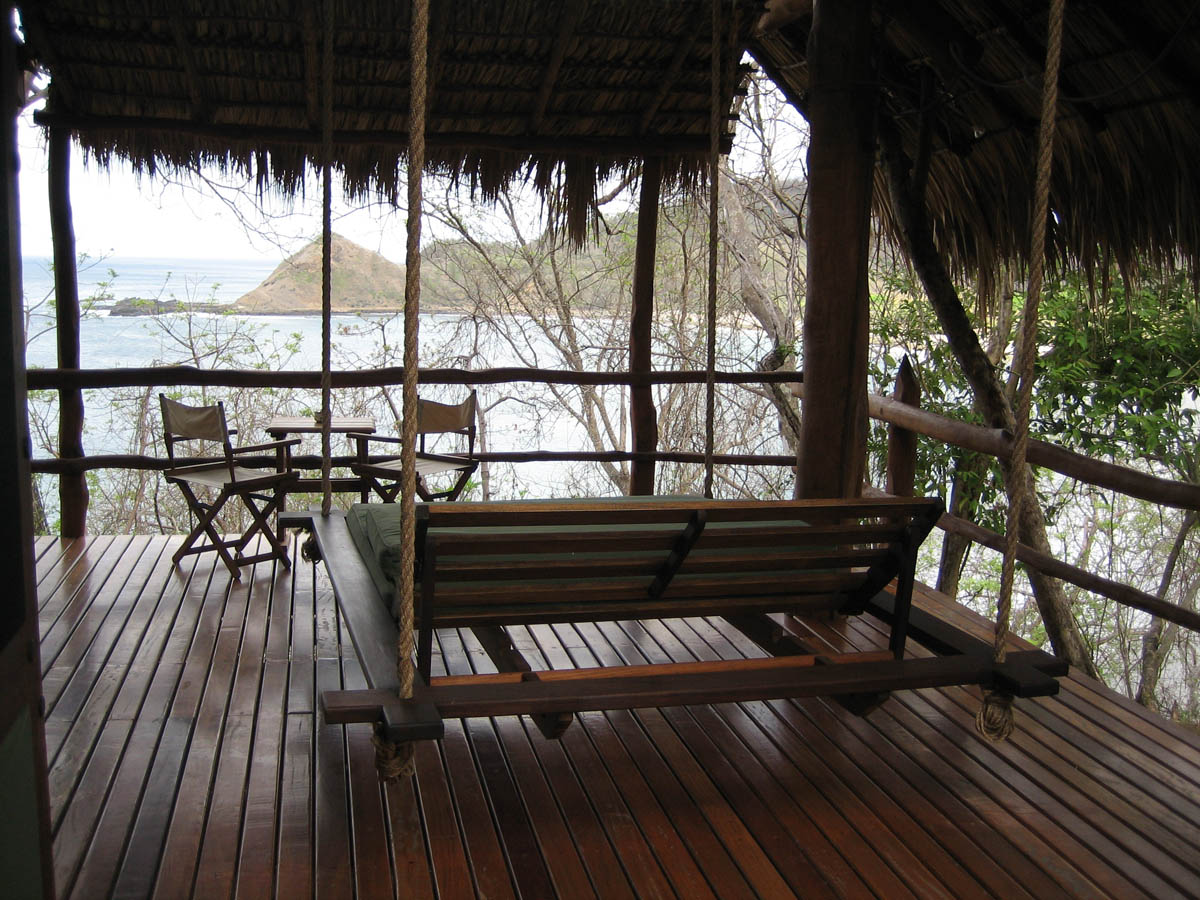 Swinging bed, suspended by ropes from the rooftop 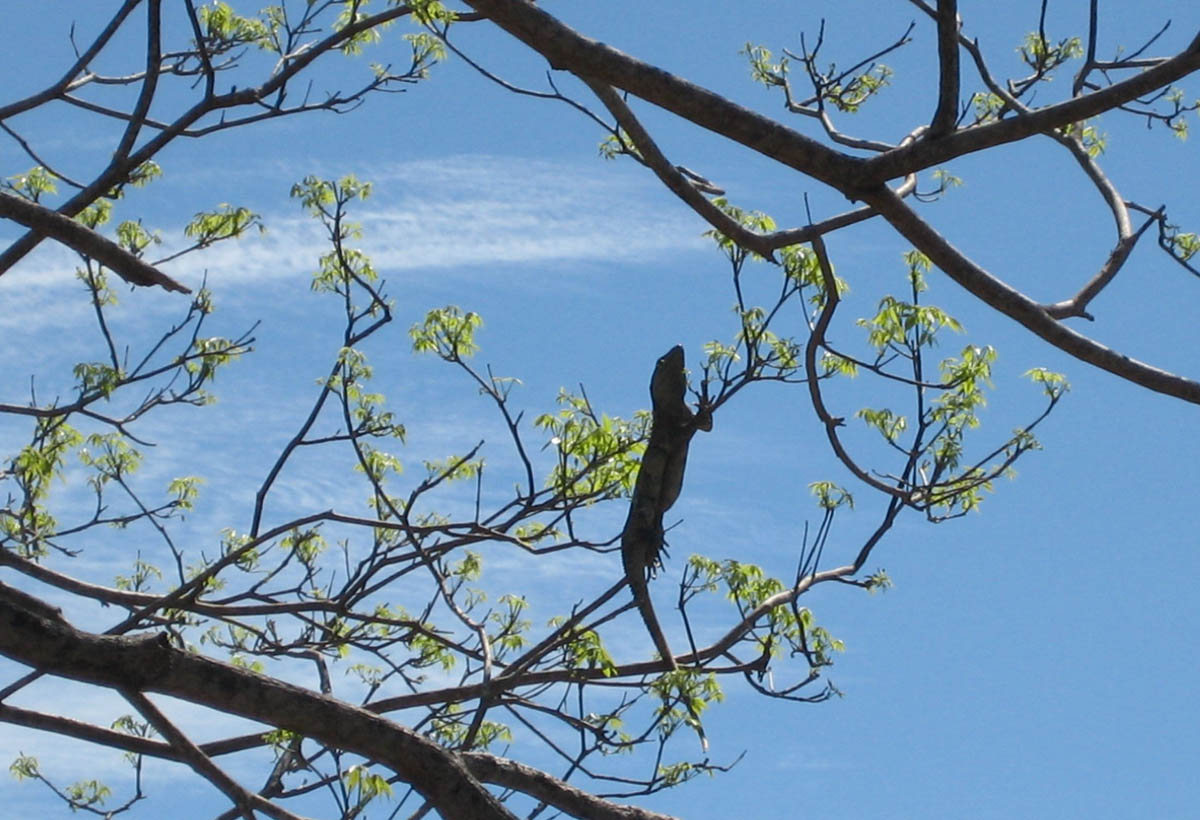 Iguana swinging in the tree

On one end of the room is a king-sized bed, with full ocean view.  On the other end is a floor to ceiling screen wall with a writing desk facing the ocean view as if it were cantilevered over the bluff. 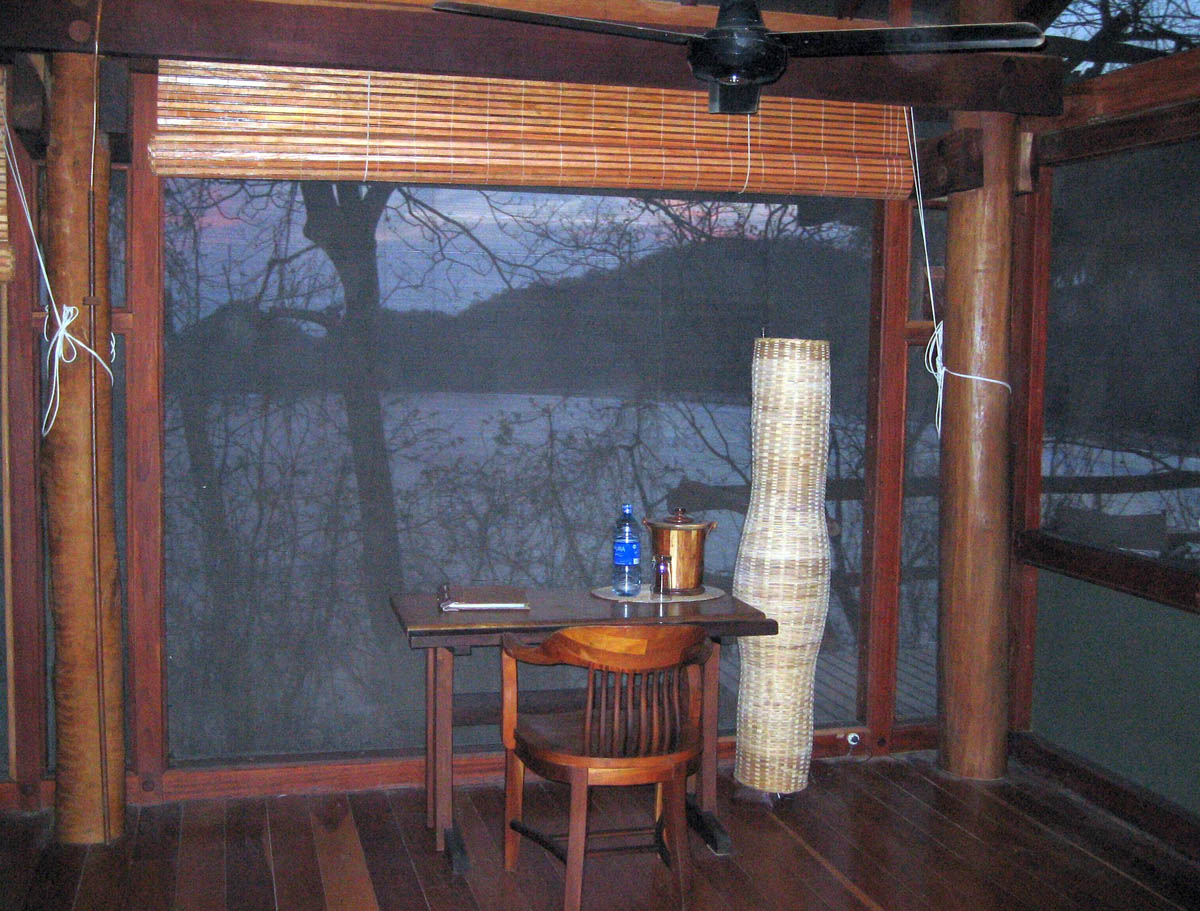 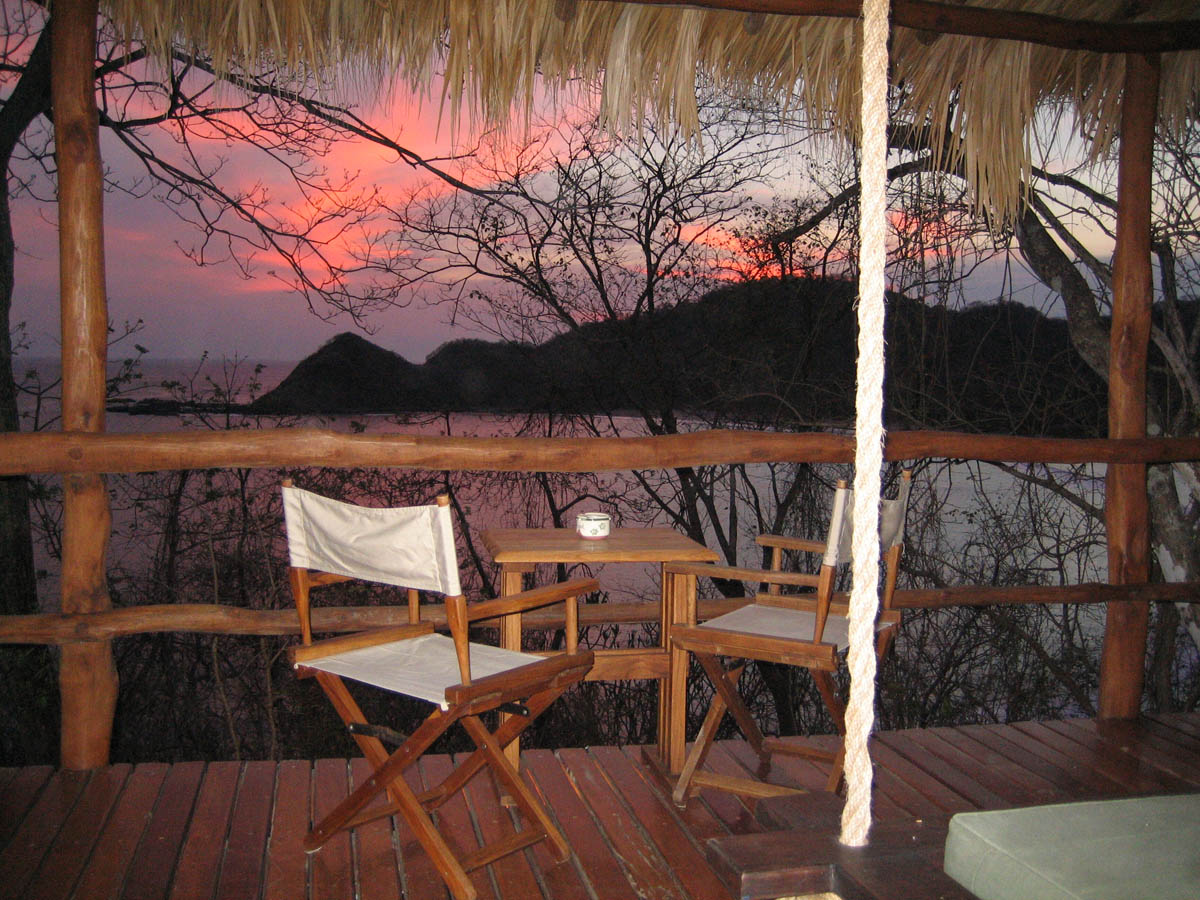 The bathroom was all designed with copper piping, curled in a decorative style, emptying out into two large white ceramic vessel sinks.  White muslin hung all around the bathroom to give privacy.  Everything is rich dark wood with high angular thatched ceilings. 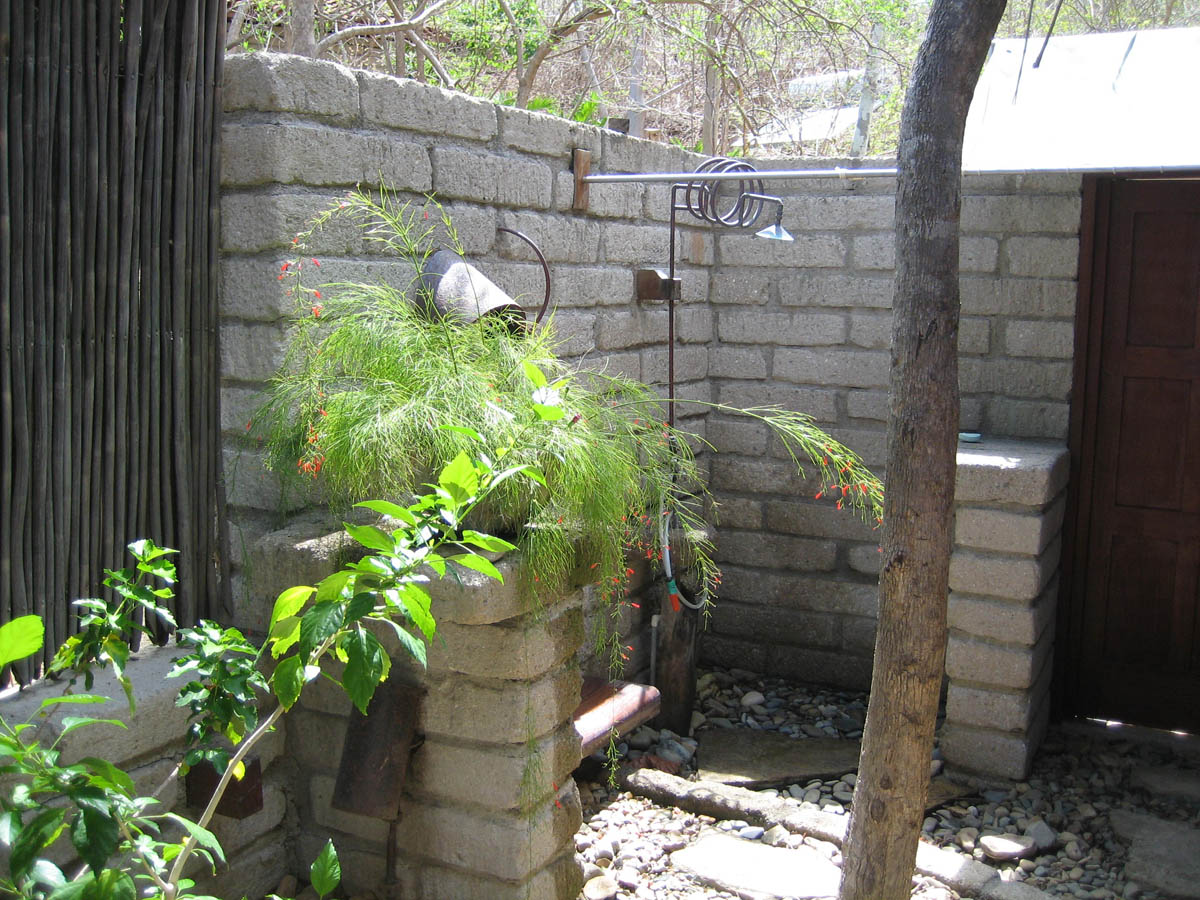 As soon as the receptionist, Claudia left the room, I headed straight for the swinging bed where I laid watching the sky turn shades of brilliant pastels.  Once it was dark, I forced myself up and out, lest I fall asleep and miss dinner.

The beautiful open air restaurant added ambiance to the dinner of fresh fish in lime butter sauce and ice cold “Bufalo” beers, with lemon icebox pie for dessert.  After the arduous climb up the hill to the bungalow I was ready for my second shower of the day, so I took a cold rinse under the stars in my outdoor shower, then crawled into the crisp white sheets to fall blissfully asleep to sounds, not of Contra fighter struggles as my friends had warned, but of the thunderous surf pounding on the rocks below. 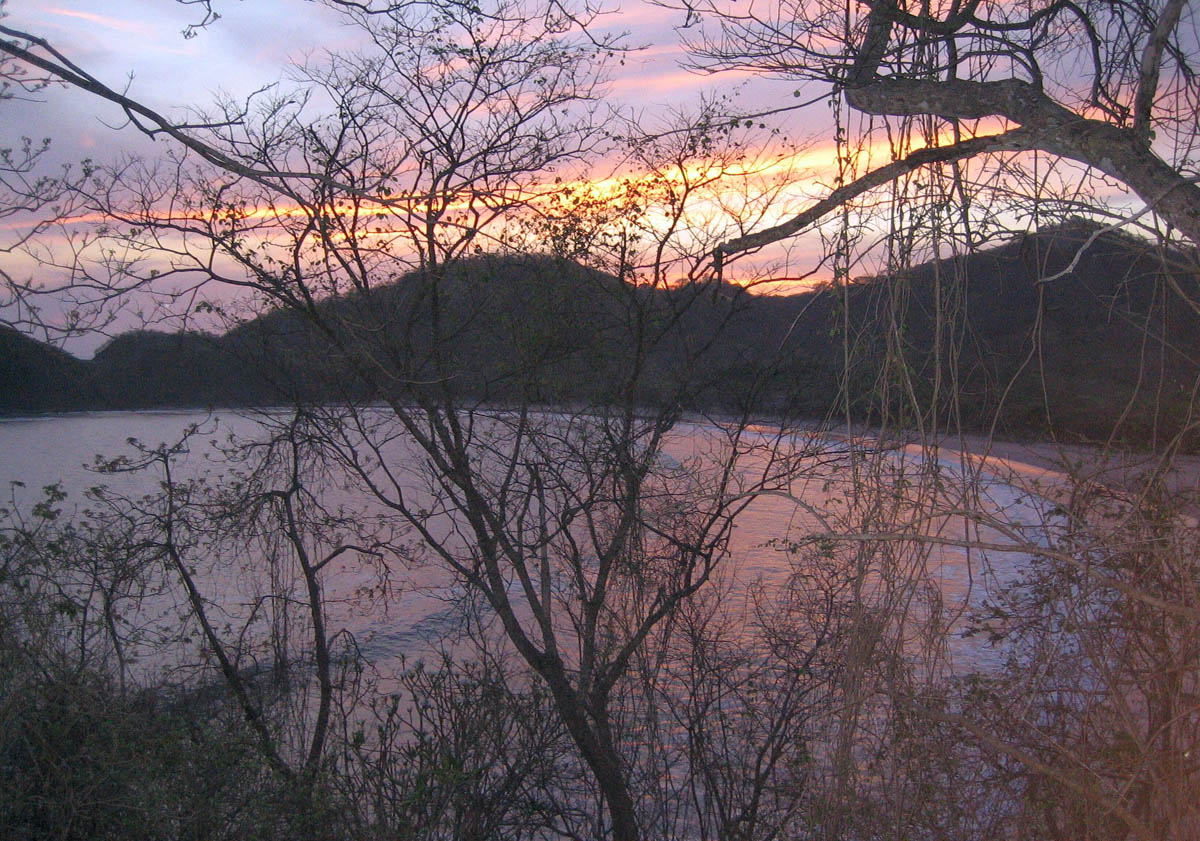