Now back in the shadow of Zion National Park, I have to say, it feels good to be back.    As I have moved at a fast clip through Southern Colorado, down the Green River, and across the southern state of Utah since July, this stop has been a bit of a “carrot” at the end of the stick.  I have looked forward to just “parking it” for awhile.  No more route planning, campground research, navigating unfamiliar territory, hitching and unhitching.   Just a couple of weeks to relax, visit with friends, and make my favorite time of the year, the autumn season, stretch as long as possible. END_OF_DOCUMENT_TOKEN_TO_BE_REPLACED

I am the last of “the Red Rocks Gang” to leave Zion.  Like the last leaf dangling precariously from the bare bones limbs of the cottonwoods long after they have dropped their brilliant golden color for the season, I am reluctant to let go.

Each goodbye has taken a piece of me.  It is like pulling the bandaid off one hair at a time.  But none stung as badly as the “final goodbye” because it signifies END_OF_DOCUMENT_TOKEN_TO_BE_REPLACED

It’s my last day in Zion National Park, and I still haven’t done the one hike I came to do.  I had my sights set on the Angel’s Landing hike since last August, when I made plans to join the Red Rocks Gang in Southern Utah.   But I psyched myself out that I “wasn’t ready.”   For one reason or another, I haven’t been in the right frame of mind to attempt this hike since I arrived.   Conditions need be just right….weather that is cool but not rainy, a mid-week day with light crowds, and an opening when the rest of the gang is taking a day off or riding their mountain bikes, so I won’t miss out on a hike with the gang to a destination I have not yet seen.    But once I realize time is running out, it’s already too late… END_OF_DOCUMENT_TOKEN_TO_BE_REPLACED

Zion has three extremely popular, highly sought out hikes in the park.   The Trifecta includes The Narrows, wading up the Virgin River between 1,000 ft walls, Angel’s Landing, climbing a sliver of a 1,500 ft high backbone, and The Subway.   Of these three, only the Subway requires a permit from the Zion Wilderness Center to enter.    They only allow 80 hikers into this area on any given day, sometimes requiring a lottery to manage the demand.  This hike is, according to NPS, “a strenuous 9-mile round-trip that requires route finding, creek crossing, and scrambling over boulders.”  No joke. END_OF_DOCUMENT_TOKEN_TO_BE_REPLACED

Zion National Park is “the gift that keeps on giving.”  Although there are so many notorious destination hikes, such as the Narrows and Angel’s Landing, it seems as if one could drop down into any canyon in the park and find equally stunning scenery.  Maybe not the adrenalin rush of guide rails of chains or special water boots required, but no less of a feast for the eyes. END_OF_DOCUMENT_TOKEN_TO_BE_REPLACED

Many speak of the spiritual vibe that is felt in Zion National Park.  Some claim to feel a spiritual connection here like no place else.  I guess it stands to reason, given the namesake of the park, Holy Mount Zion, located within the holiest of cities itself, Jerusalem. END_OF_DOCUMENT_TOKEN_TO_BE_REPLACED

Without a doubt, the most iconic hike in Zion National Park is Angel’s Landing.   It has been on my “must do” list for quite some time now.   In fact, I had originally planned to do this hike on my 60th birthday back in early October.   I always like to do something memorable each year, like jumping out of a perfectly good airplane, or taking a rock climbing course to remind myself that “Age is just a number.” 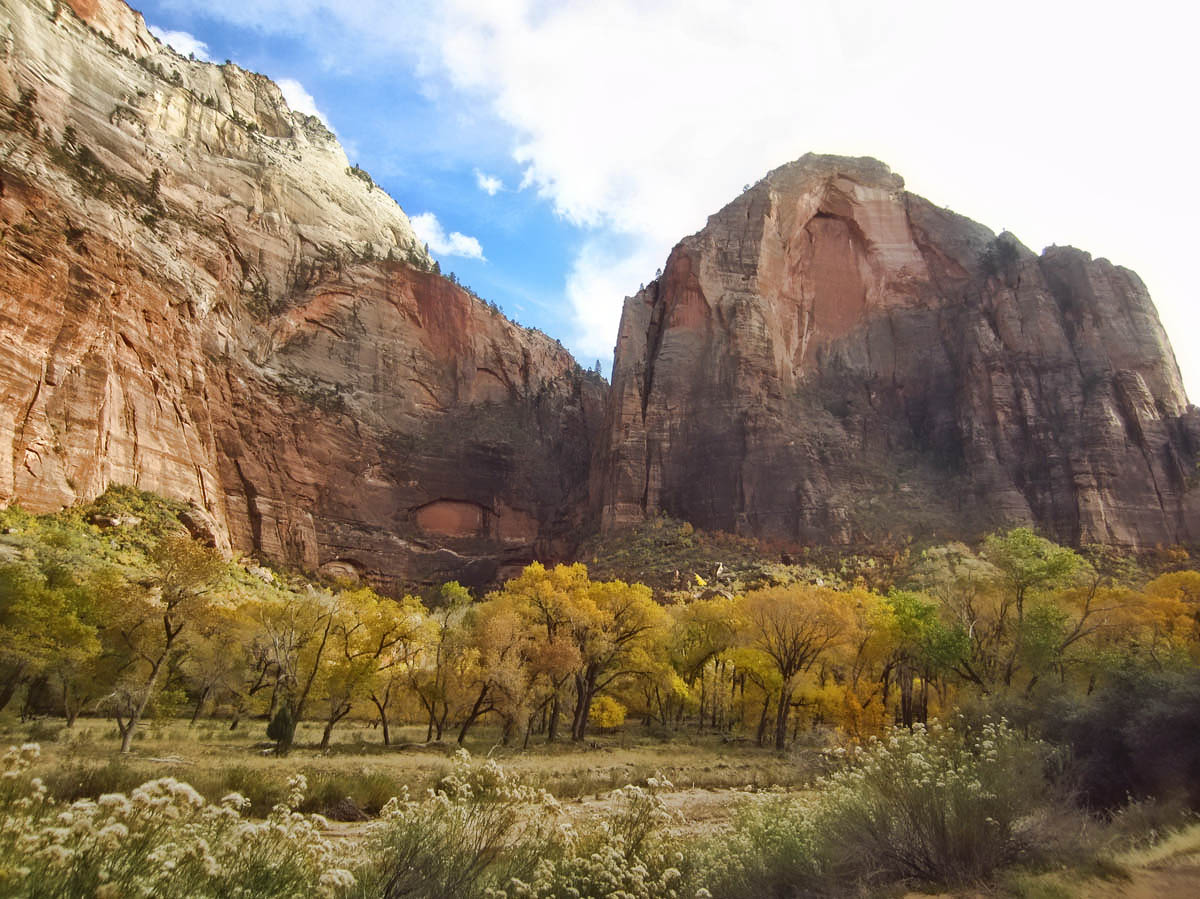 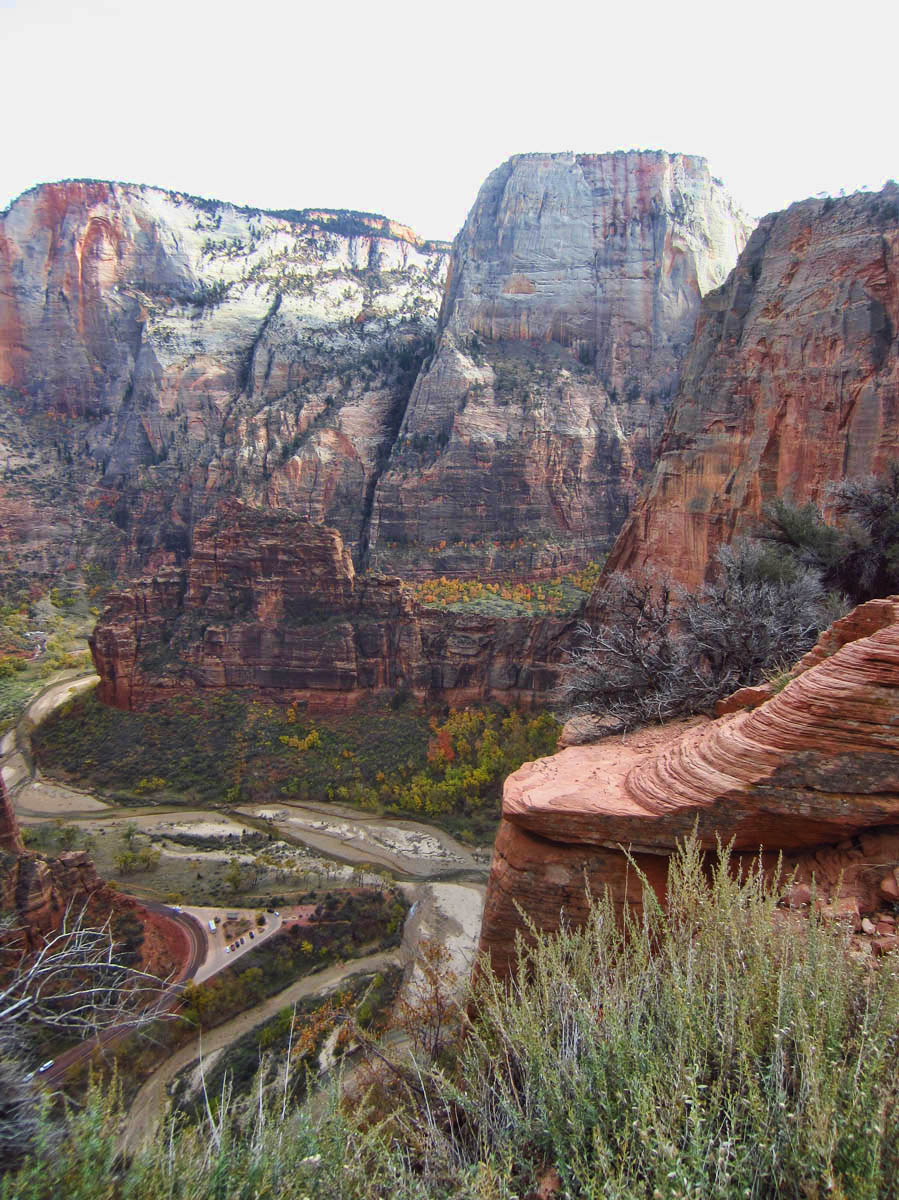 But this year, life on the road altered my course, as I had to make my way from Montana to Utah via Texas to get a new engine for the Tracker.   Although I am grateful to my loving family who treated me to a divine Indian buffet to celebrate my 60th, (not to mention a replacement engine for my Tracker!) my mind kept going back to “Not exactly where I thought I would be on this significant milestone day.”  (So if age is truly just a number, I must ask myself “Why was it significant?”)  😉 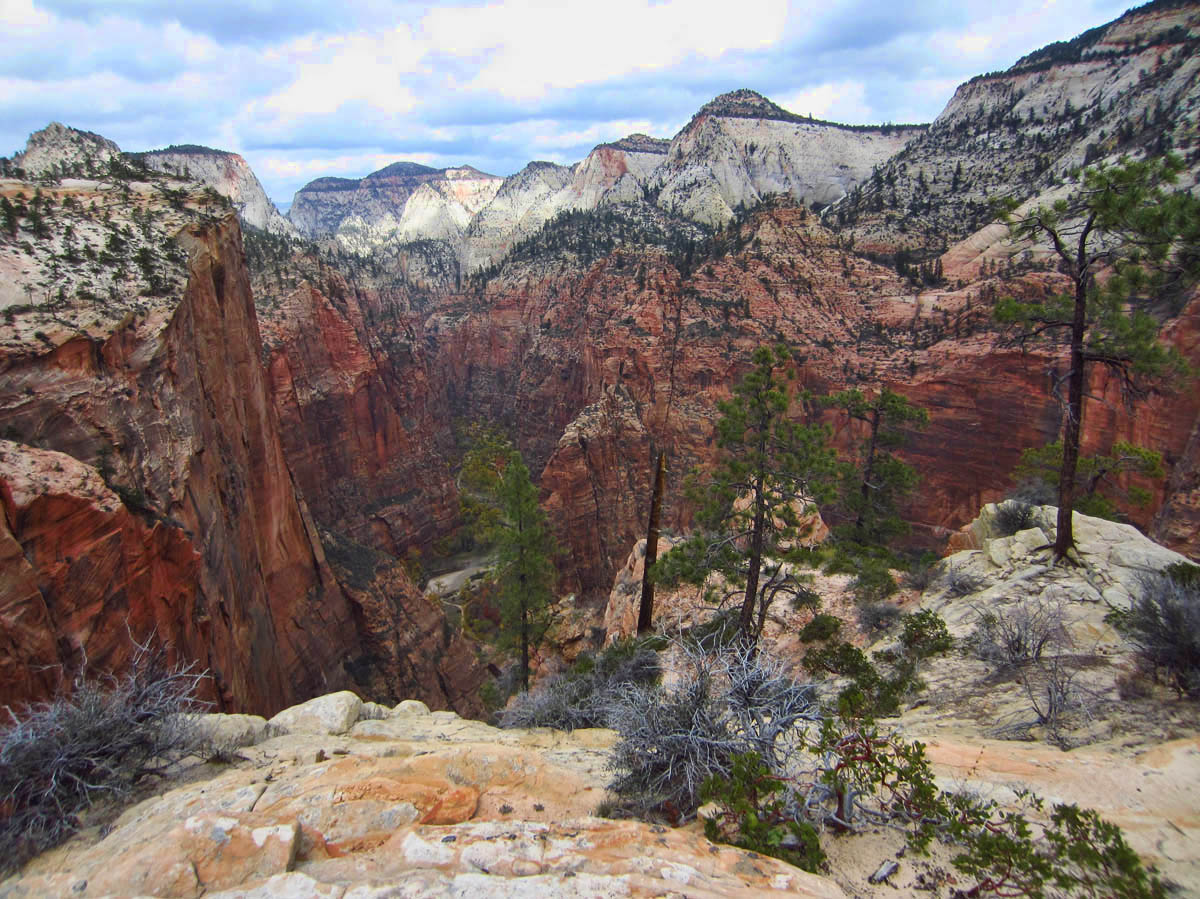 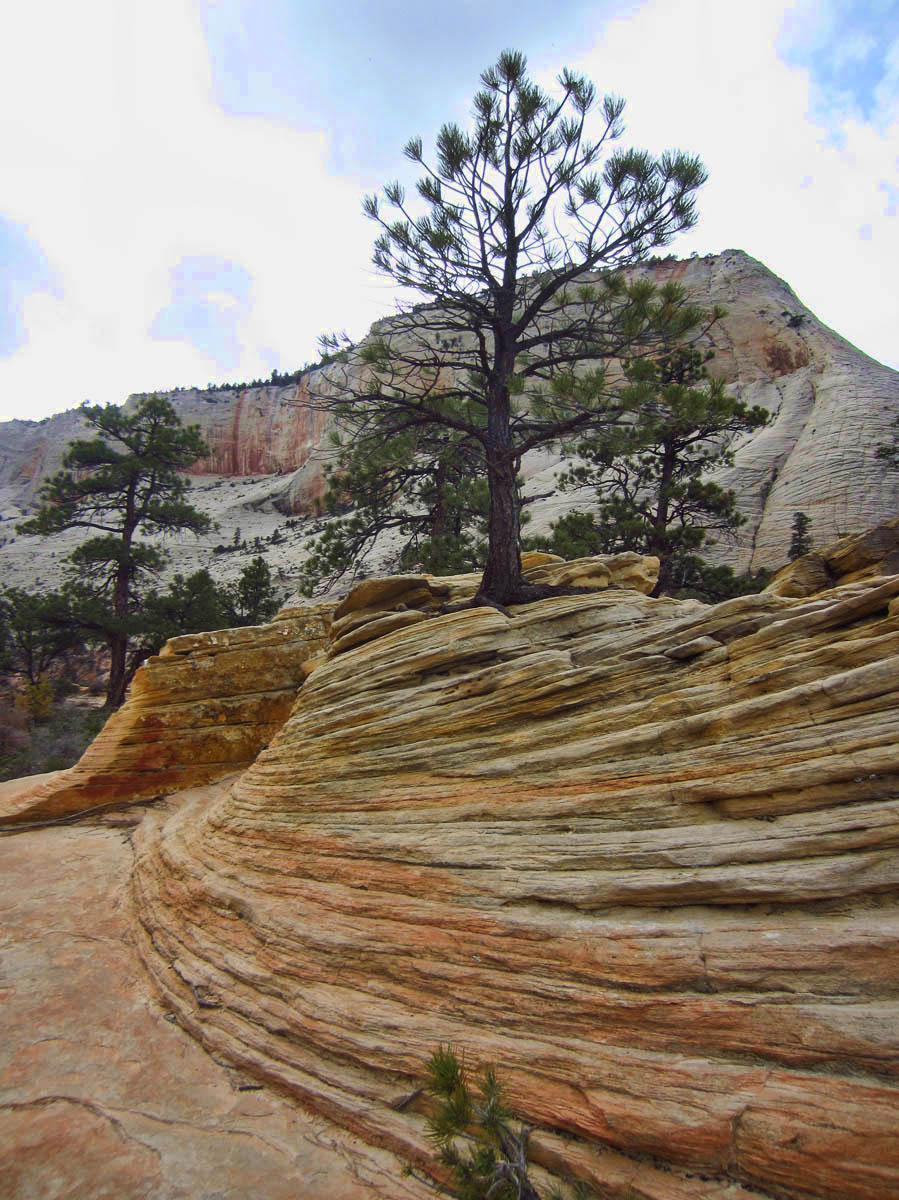 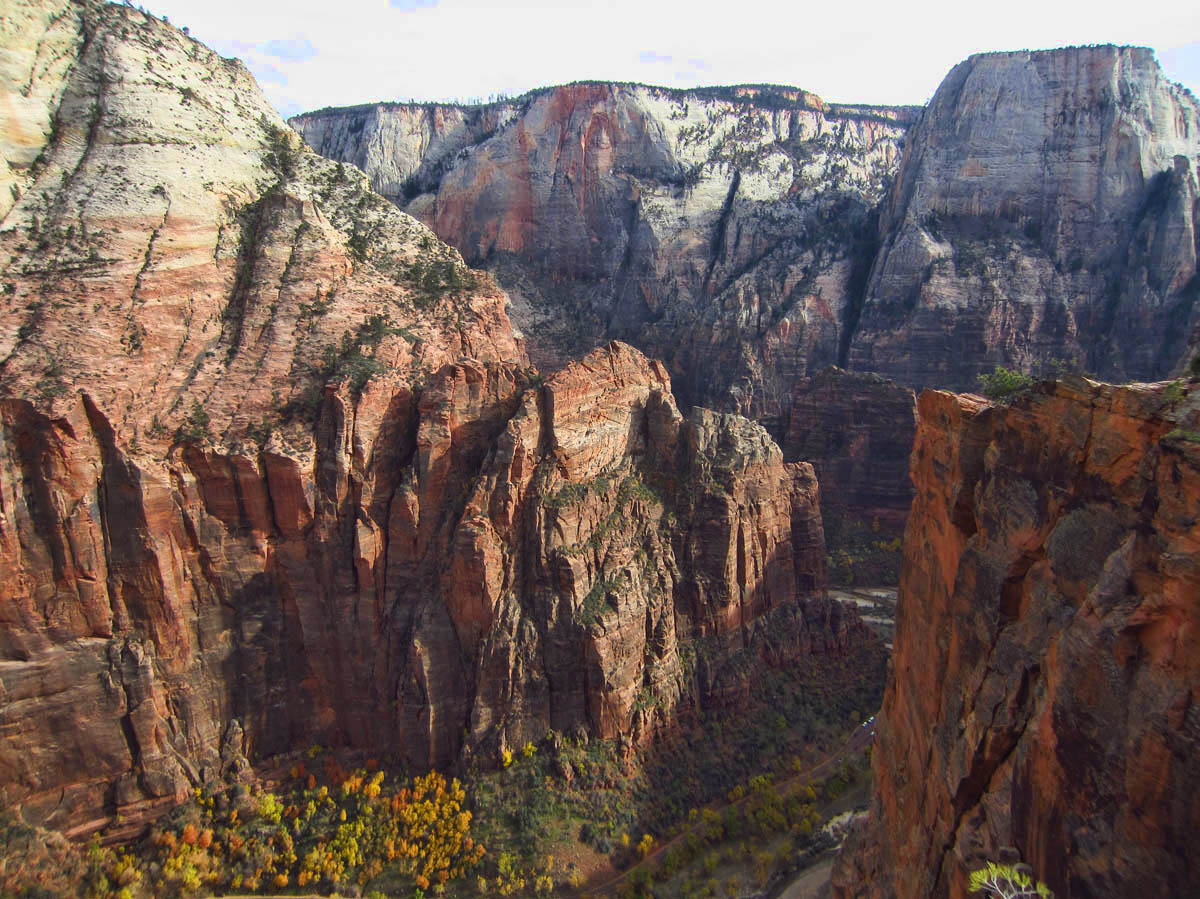 So now that I have finally made it to Zion, “The Landing” seems ever looming.   Considered to be one of the most challenging hikes in the park, the five mile trail climbs 1,500 ft up the spine of a fin rock formation, with sheer drop-offs on either side.   It is considered a strenuous hike where the NPS description warns, “Long drop-offs.  Not for young children or anyone fearful of heights.” 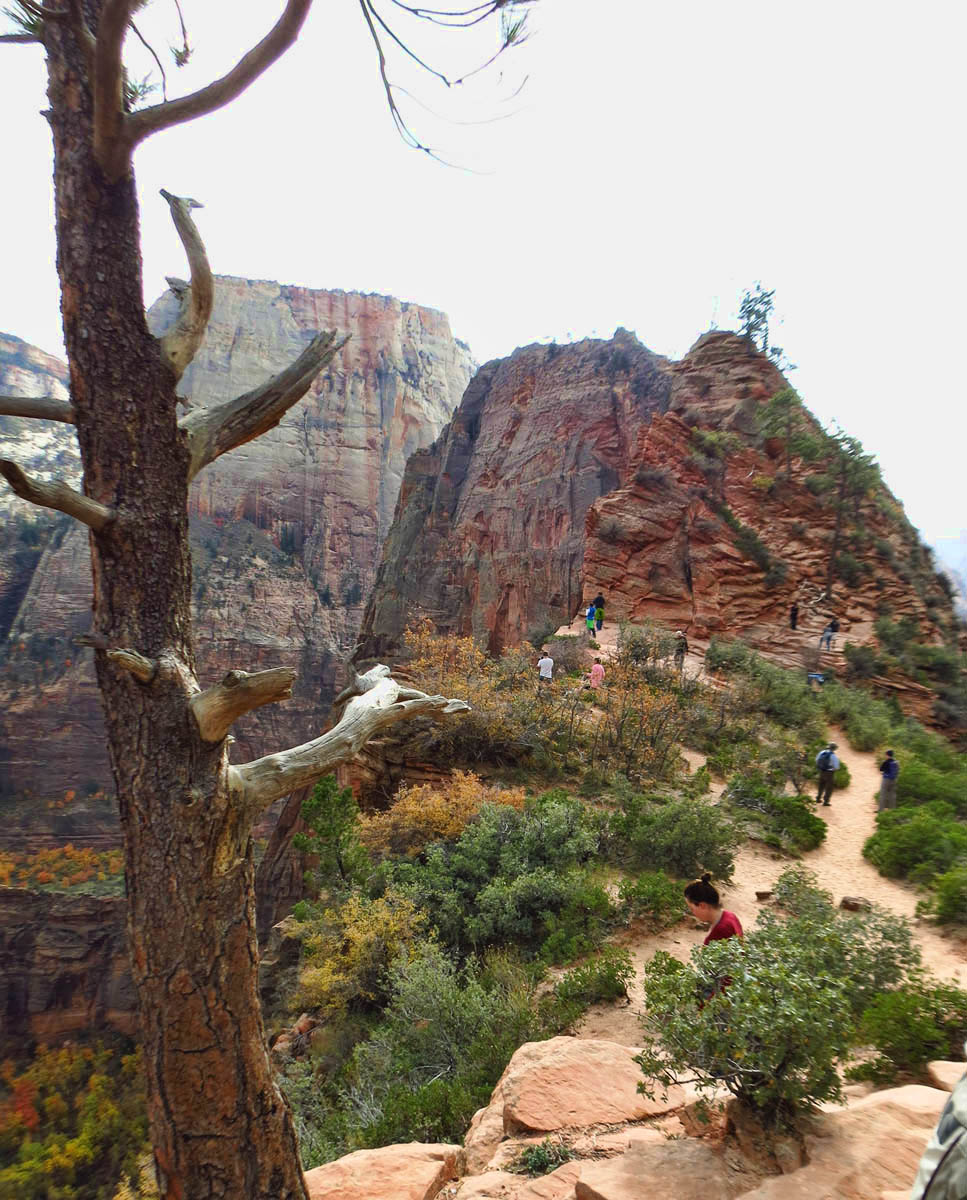 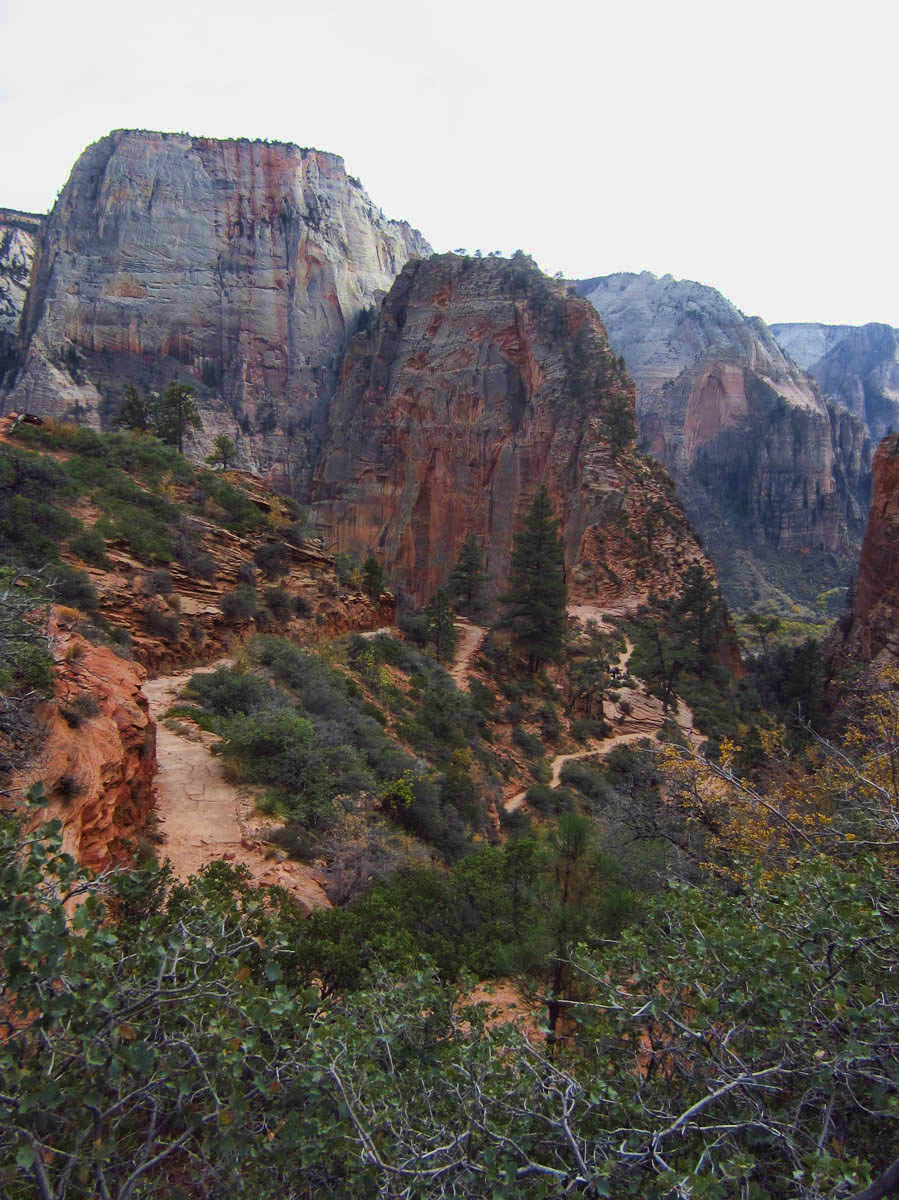 Angel’s Landing is omnipresent.  It towers overhead, protruding out of the canyon on every drive or bike ride through the park.  There are conversations about it;  who has made it to the top, who turned around at mid-point, and who didn’t feel the need to try.  And it seems to be the first question asked when you strike up a conversation with other hikers on the trail.  One guy I met along the East Rim trail said “I’ve roped up for less!” referring to harness and climbing gear.

So I am feeling a bit psyched out by a place so steep it serves as a landing strip on the way to Heaven!  When the email titled “Tomorrow’s Hike” comes through, I am not ready.  “Let’s head on up Walter’s Wiggles to Scout Lookout, where some can conquer Angel’s Landing, while others push on to the West Rim….one of the best hikes in Zion, really.”   But the great news is, this will give me a closer look!   I will do the West Rim hike, stopping at Scout Lookout only long enough to do a bit of reconnaissance! 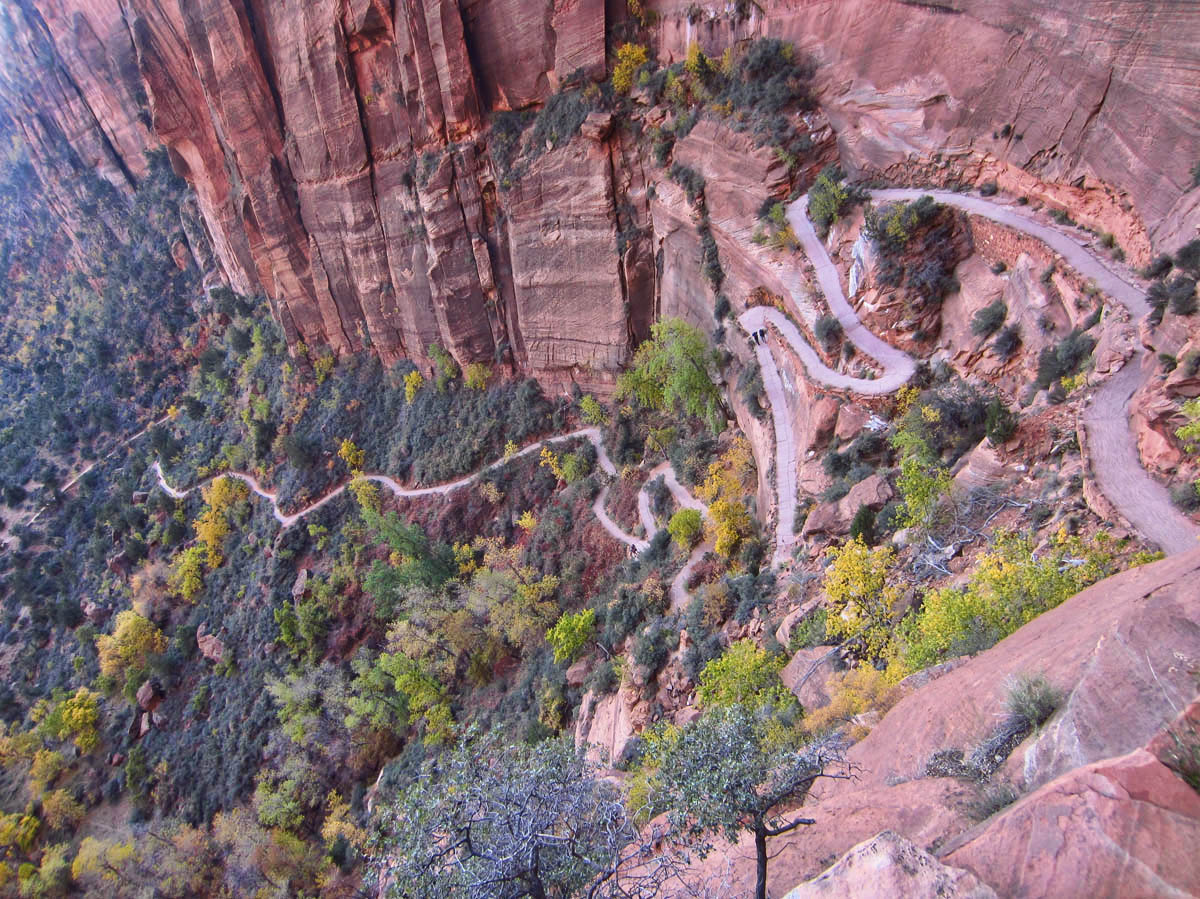 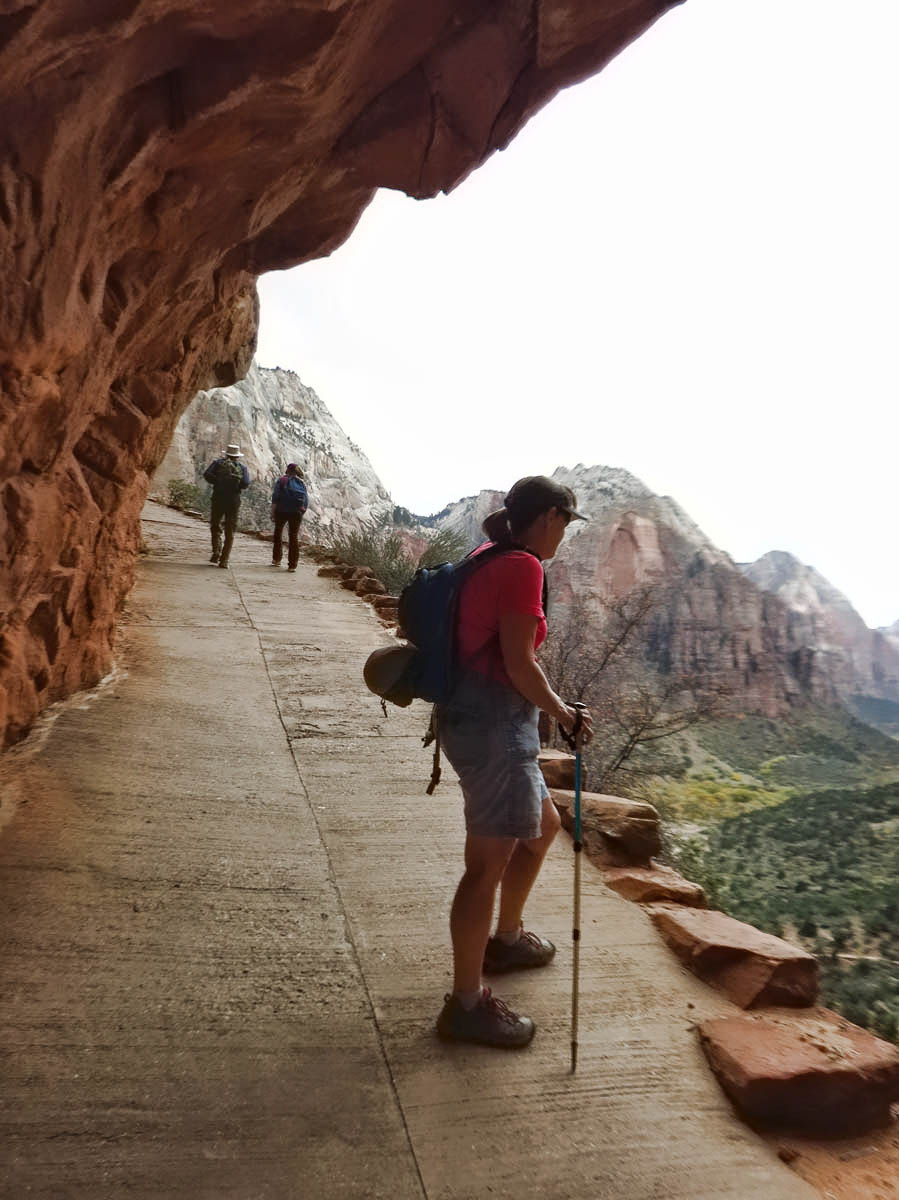 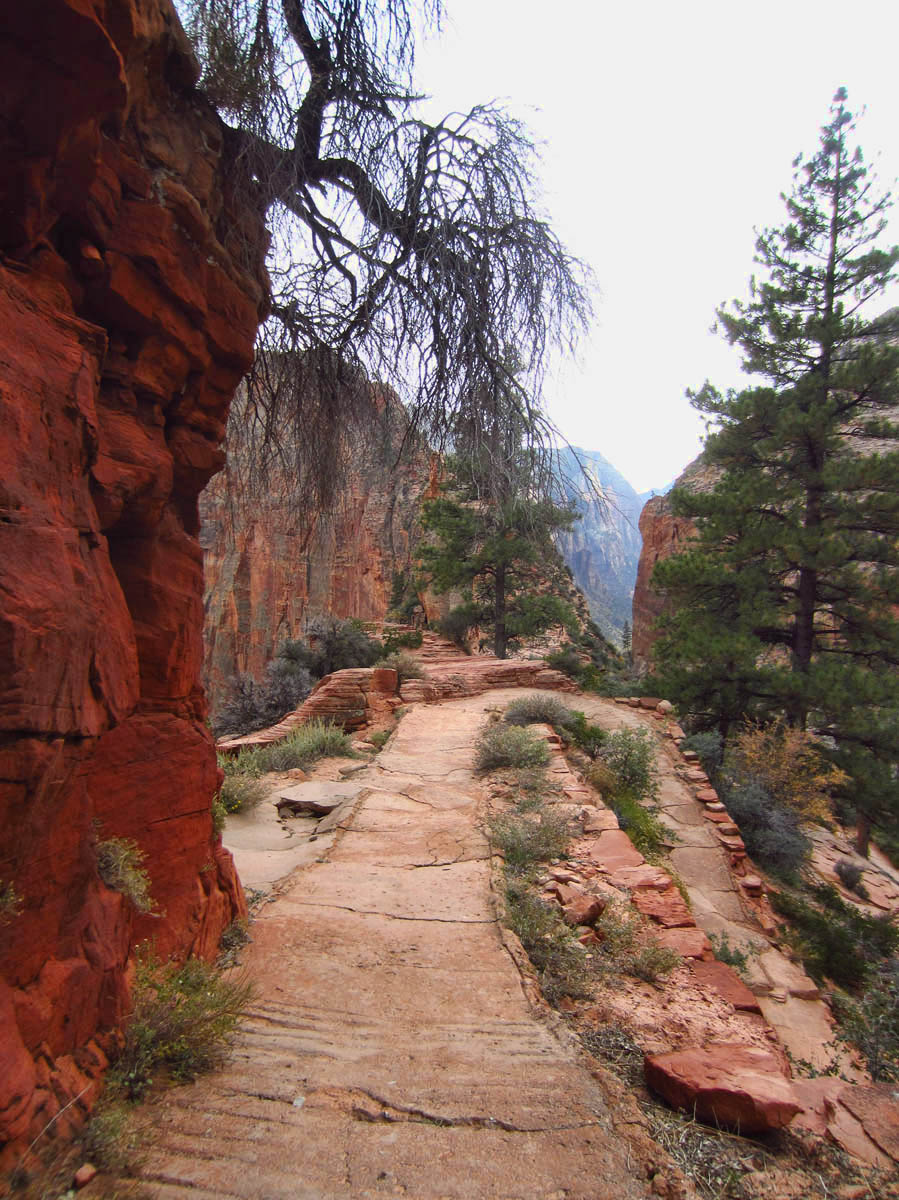 The hike up is two miles of nonstop “up.”   The trail is a series of long, paved, switchbacks that were it not for the elevated views, would kill you from boredom alone.   It is a tedious climb, until finally, the trail breaks out on a level stretch through the cold, colorful “Refrigerator Canyon.”  Just about the time I cool off, there are more switchbacks ahead. 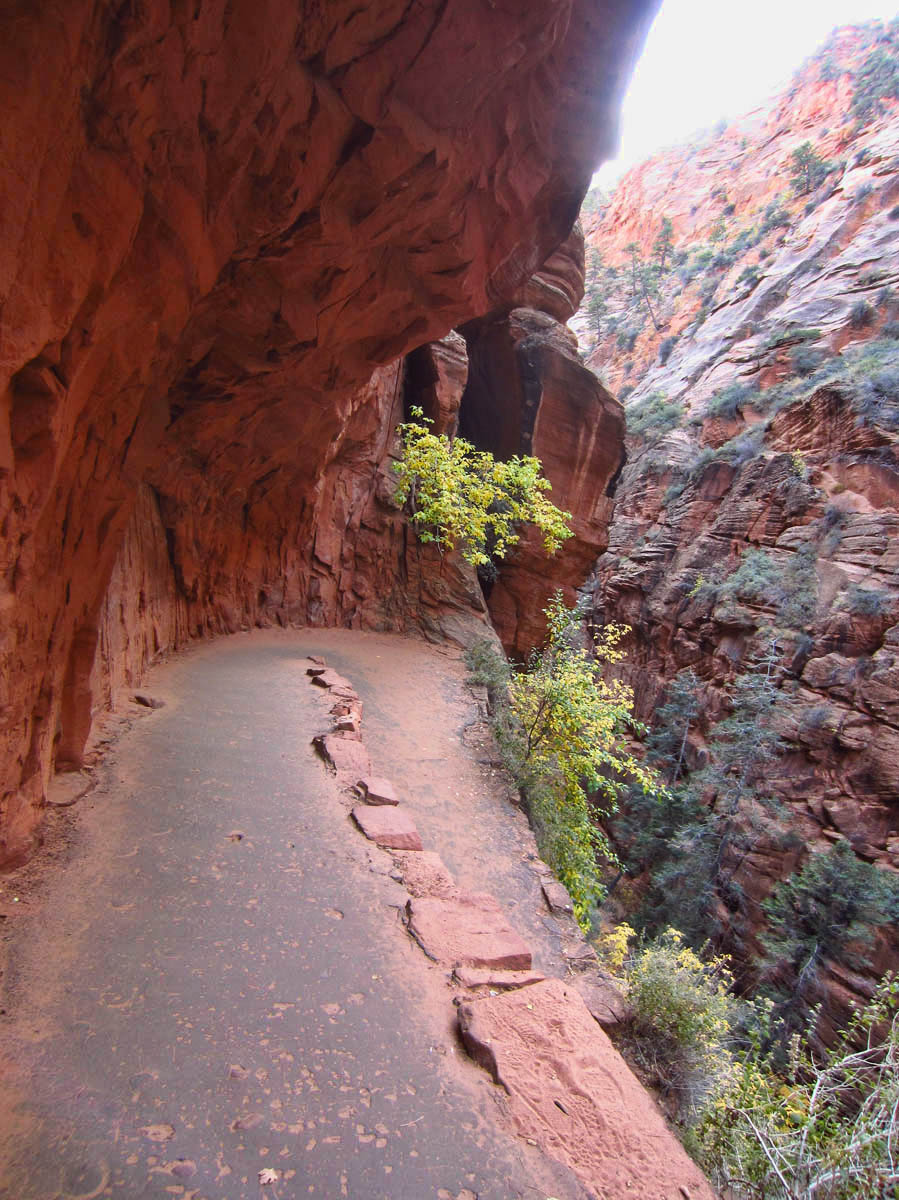 When I think I can’t go any further, I look up to see Mark standing overhead, where he announces, “Welcome to Walter’s Wiggles!”   Well, I can’t stop now!   This is the famous stretch of 21 tight zig-zagging curves that look like a Slinky stretched out before me!   Walter’s Wiggles were named for the first park Superintendent, Walter Roesch, who first began trail construction to reach Angel’s Landing back in the 1920’s.  This is one of the most famous landmarks in Zion, so I find inspiration to continue the steep march upward. 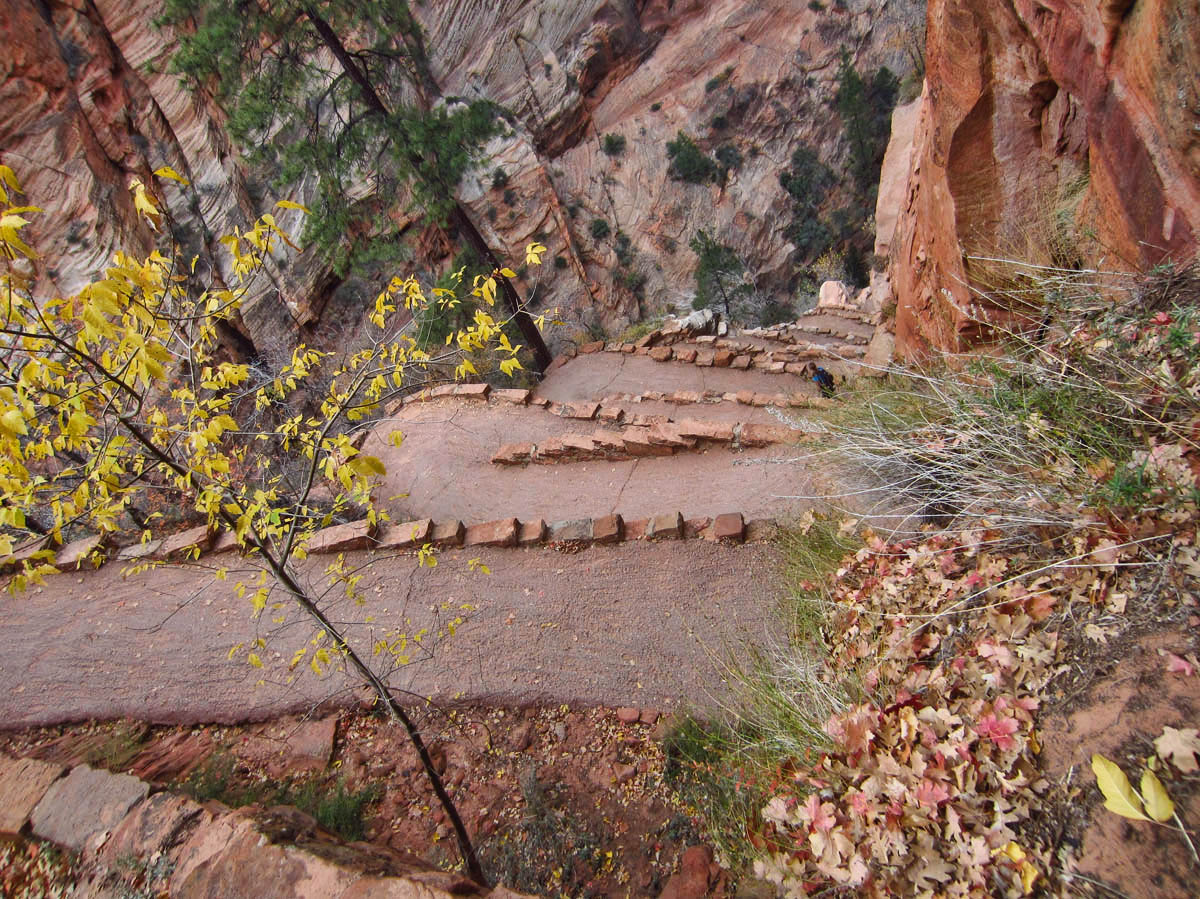 Looking down on Walter’s Wiggles, 21 switchbacks.

Finally, we reach Scout Lookout, where we stop for a bite of lunch and wait while a few of the gang tests out the first stretch of the ascent.   It looks deceptively easy from this point, but once we continue on around the West Rim trail and look back at the towering fin, it is possible to get a true sense of the length of the climb, the narrow slip of the “isthmus,” and the sheer, daunting steepness of the final push to the top. 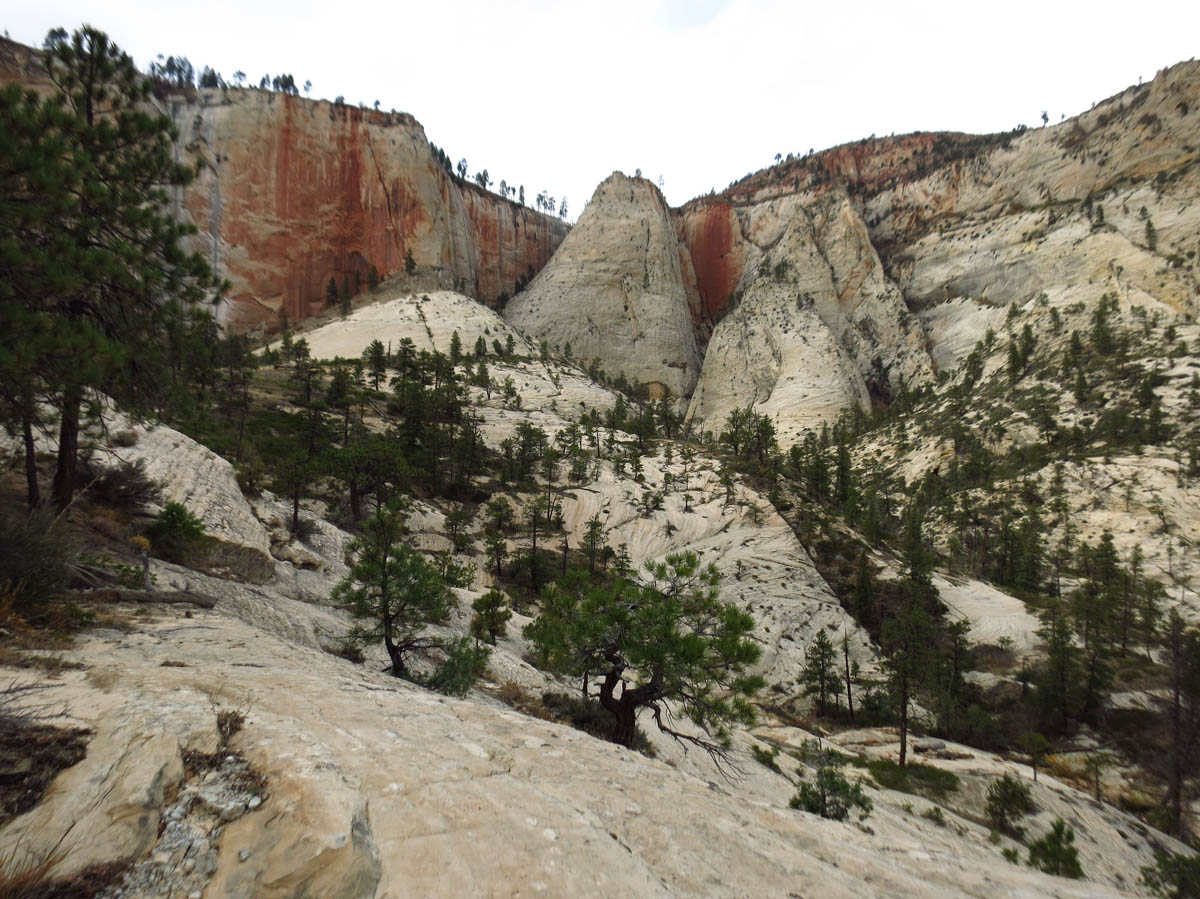 View of the West Rim from West Rim Trail 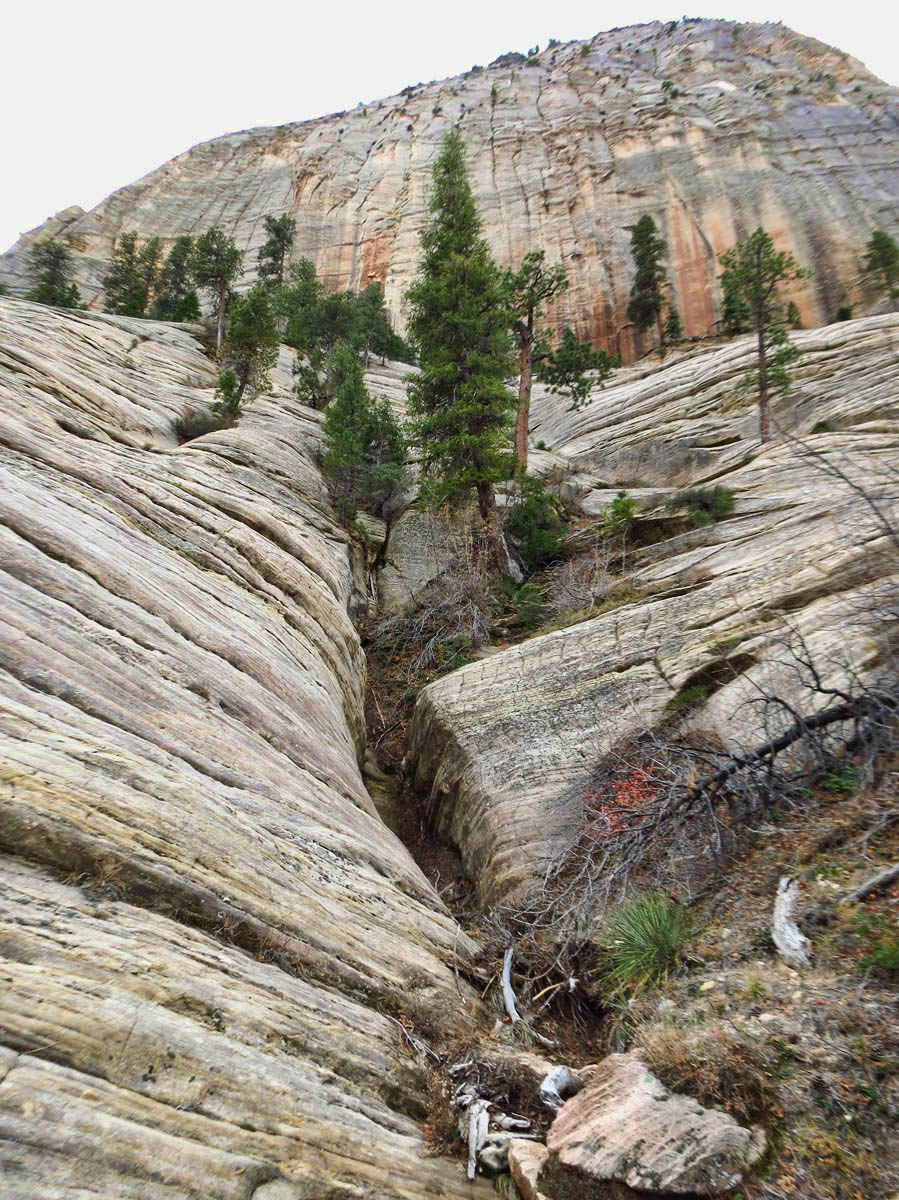 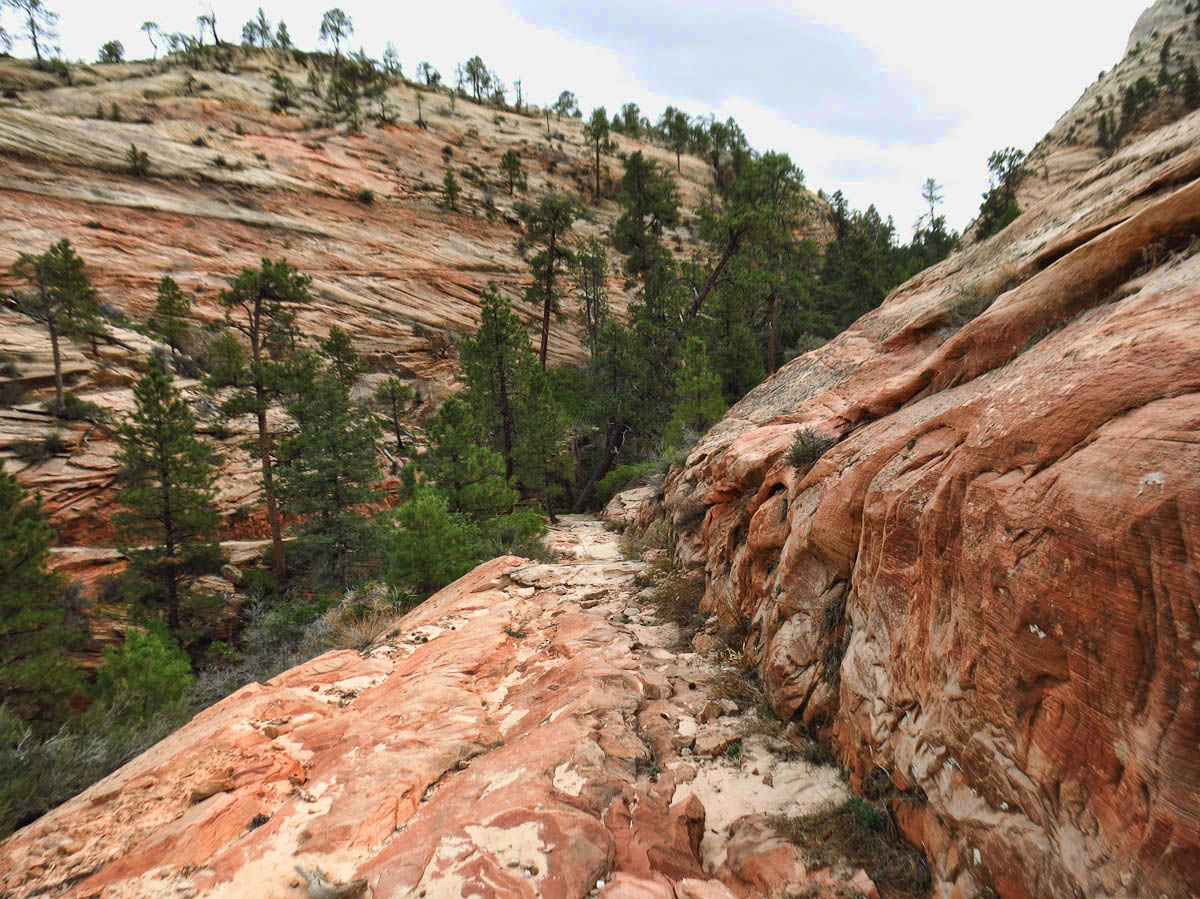 A lot of West Rim Trail has been paved, but not all…

We continue along the West Rim trail, and Mark is right, it offers some of the best scenery I have seen yet.  Most of Zion National Park is spent looking up, because the main scenic drive runs right through the bottom of the canyon.  So to be able to get up high and look out across the vistas over the canyon below is just breathtaking. 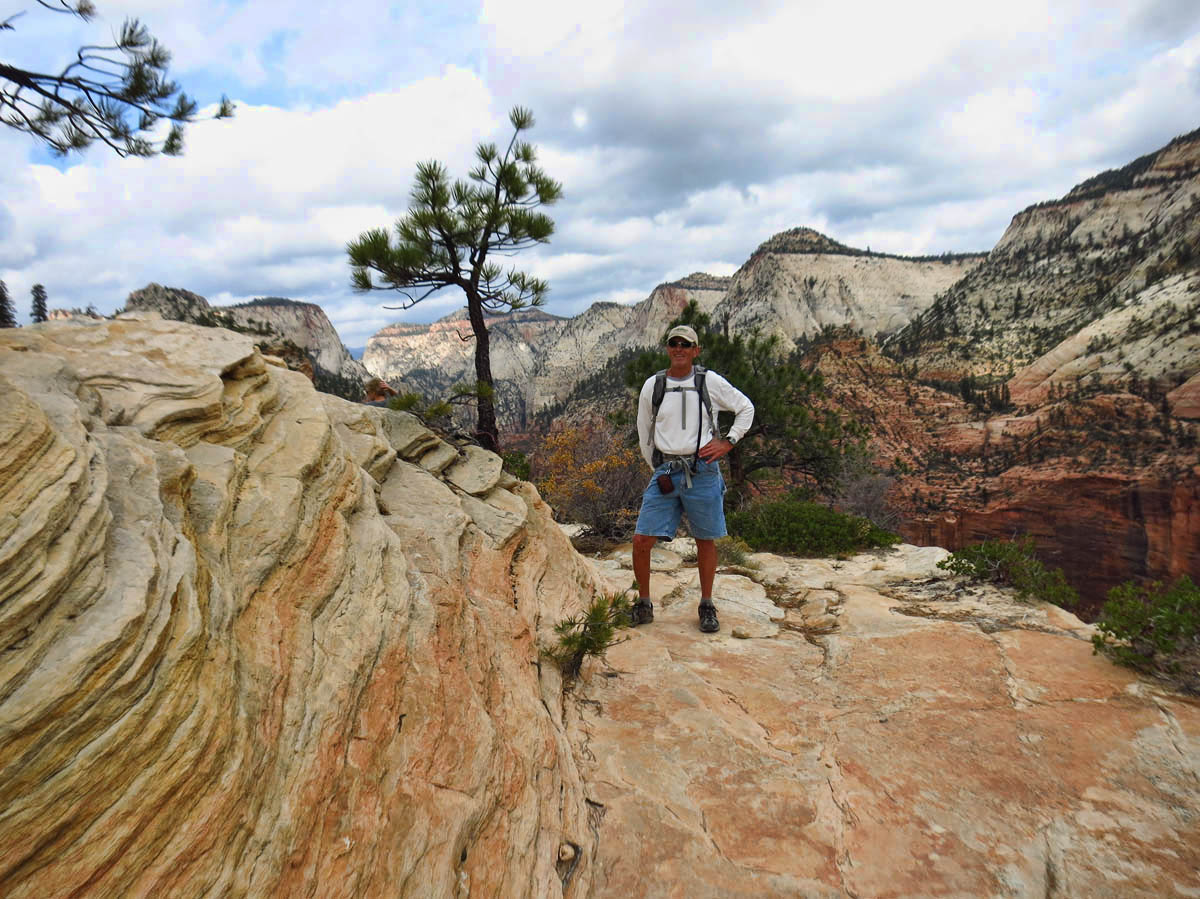 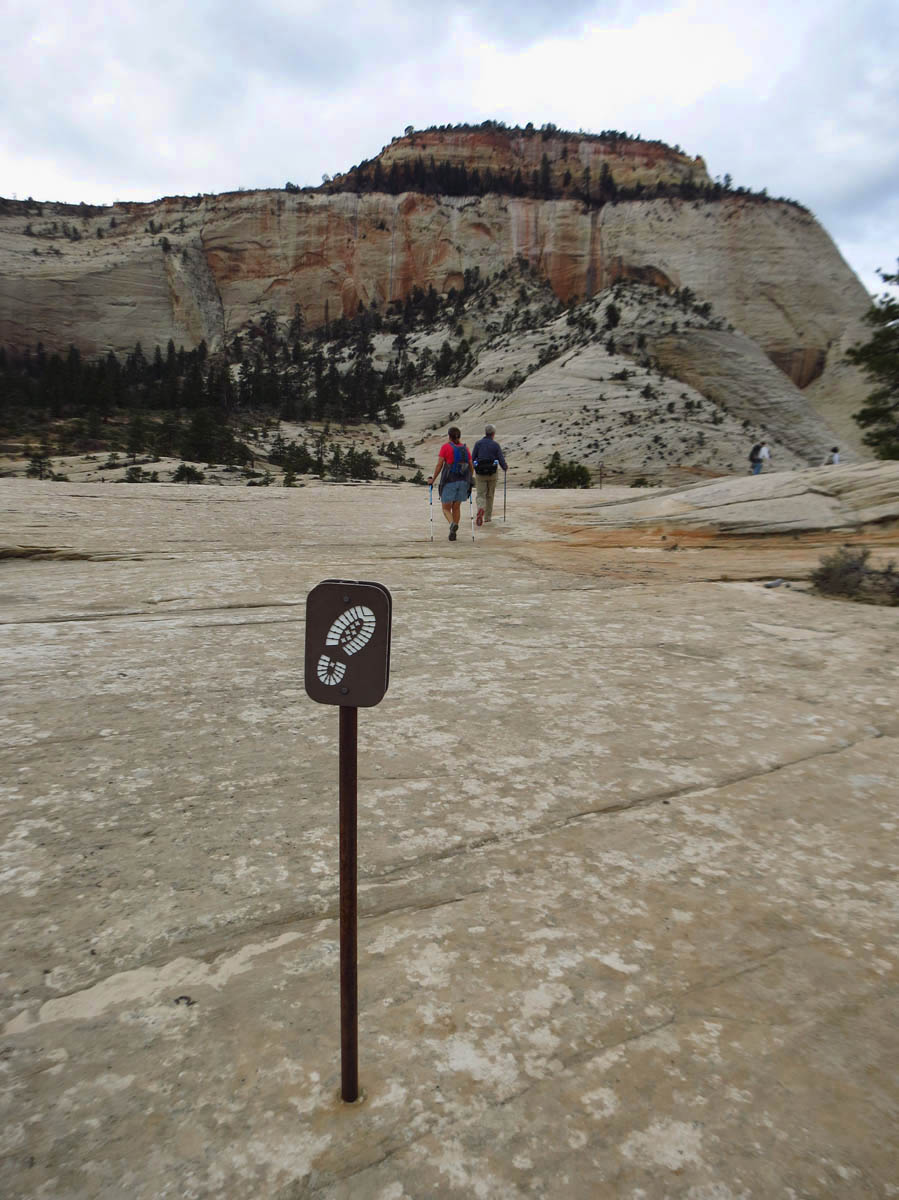 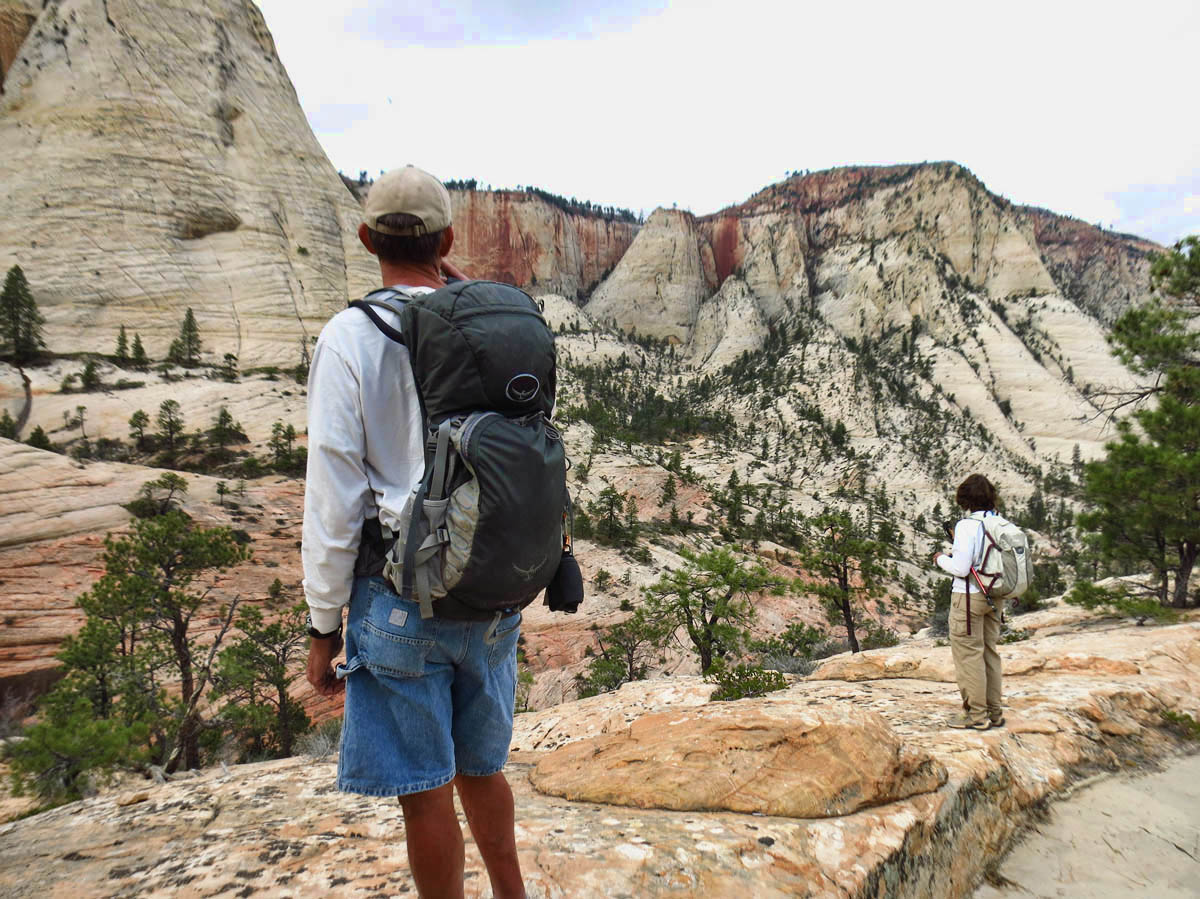 The West Rim Trail is the first trail I have hiked with the gang where there appears to be no end.  Eventually, it traverses several canyons, up and down, until exiting along the West Rim at Lava Point, 13 miles away.  One by one, members of the gang decide to turn around at their own comfortable distance, until it is only me, Bobbie, and Mark.   They show no signs of slowing up, so I decide to turn at the next downhill grade, so I don’t have to climb anymore.   Off they go in the distance, like a couple of wild hares let free from the reins of a tortoise. 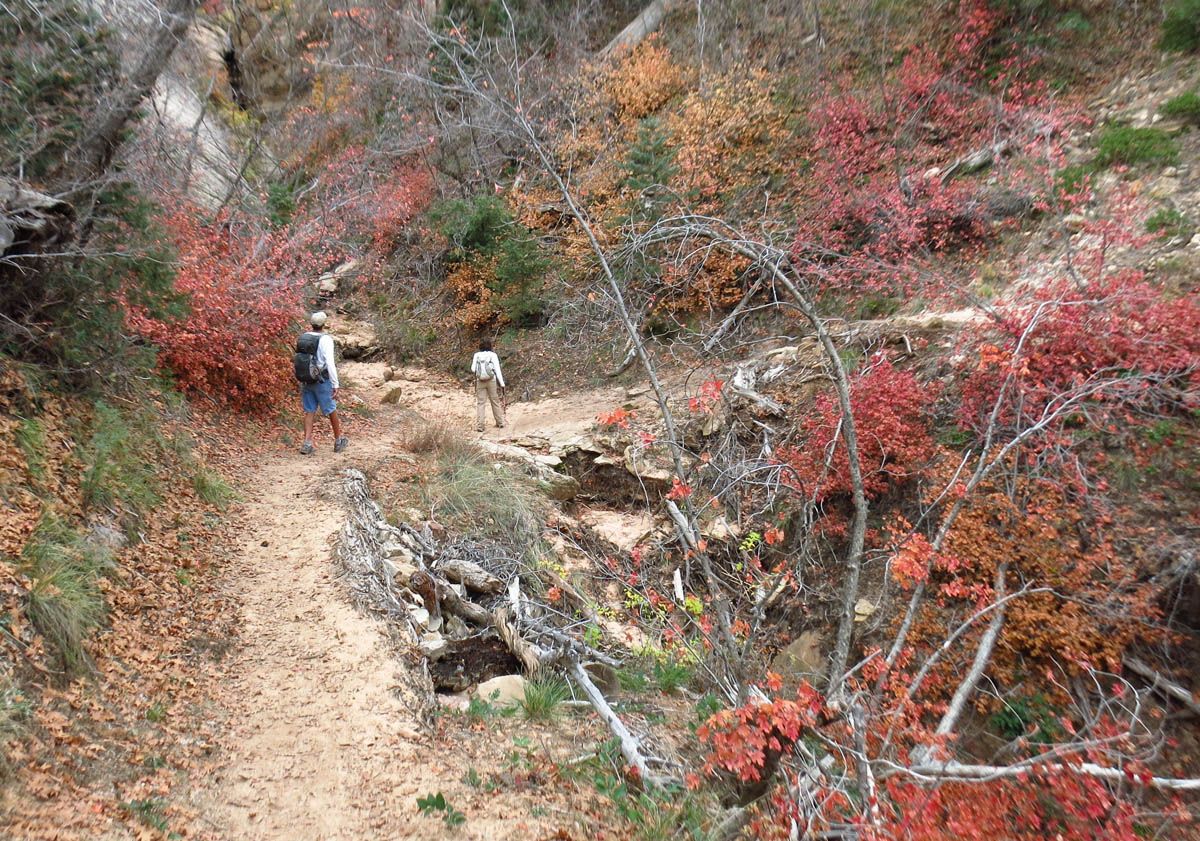 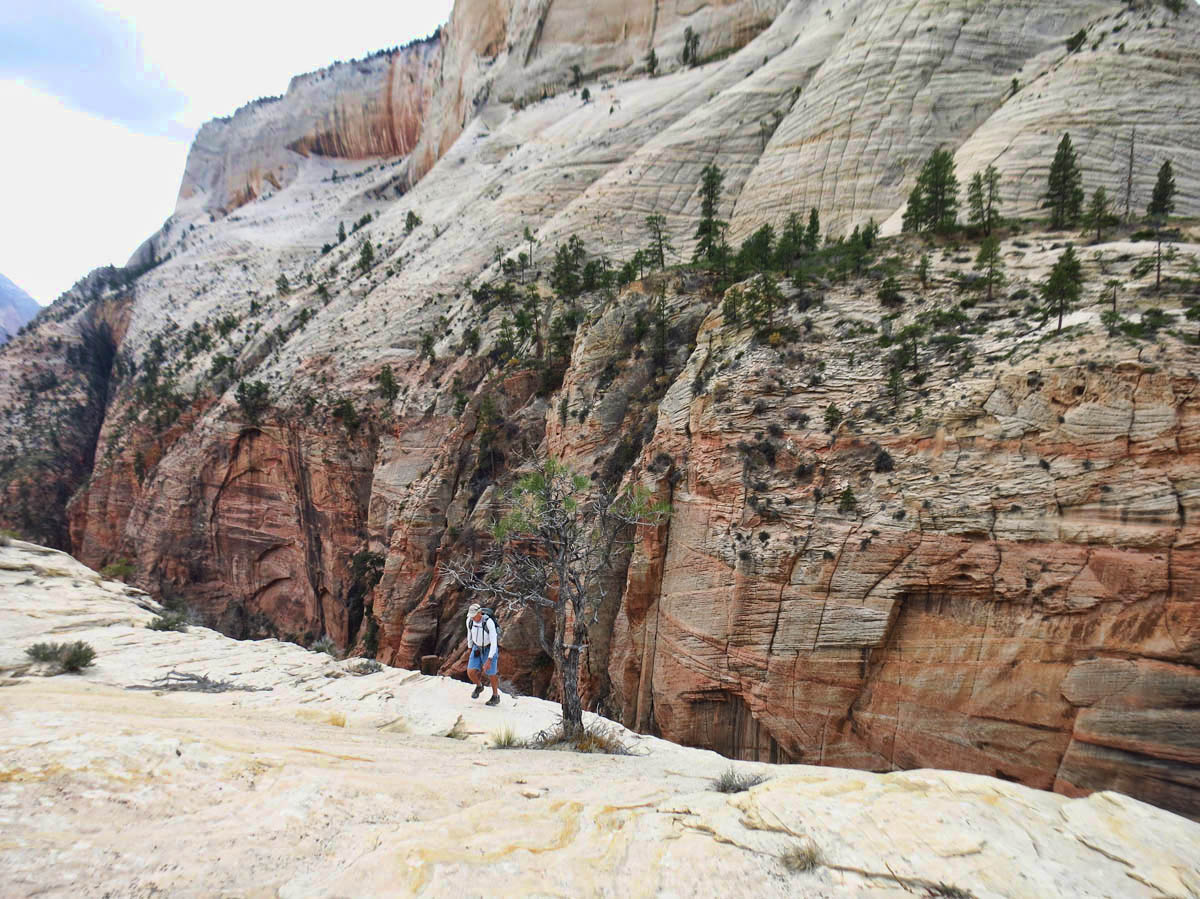 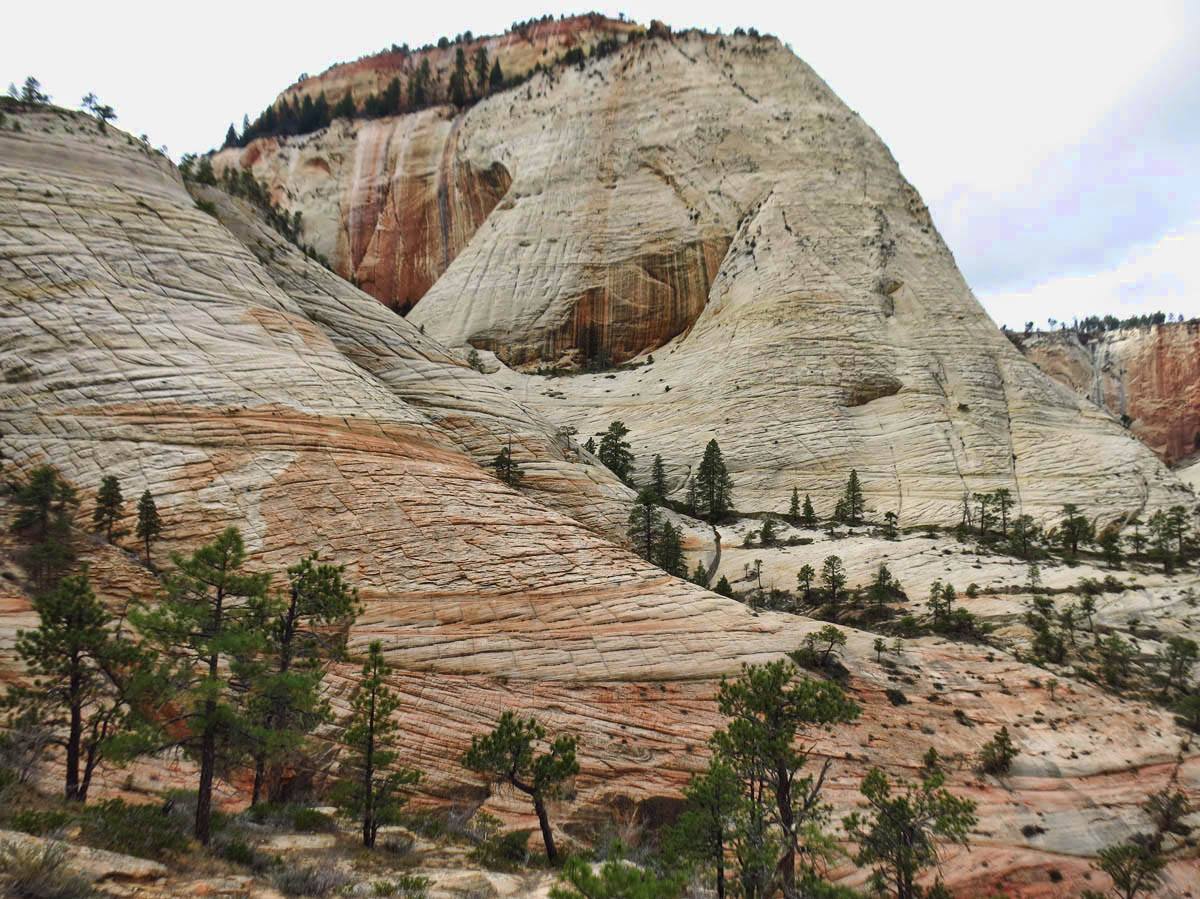 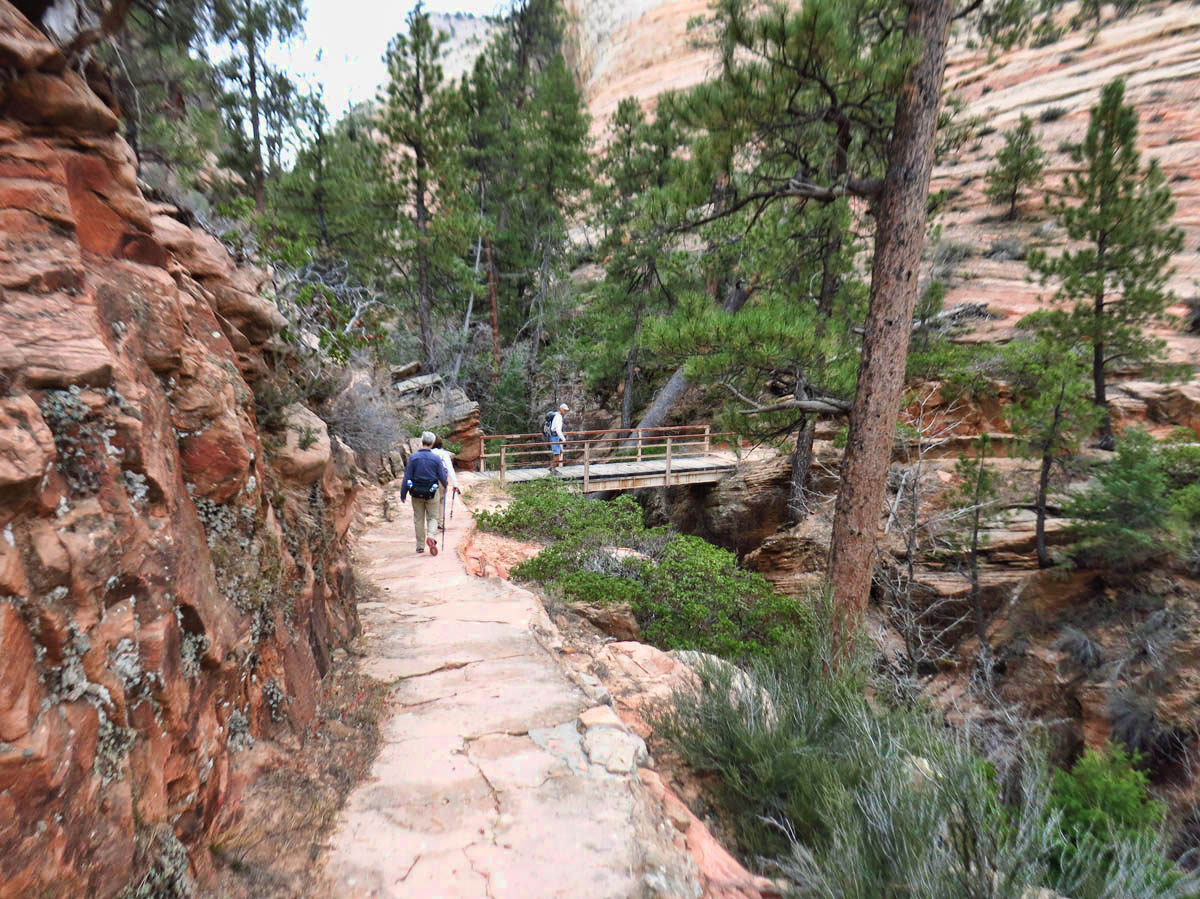 As I race back down the trail, now downhill all the way, I pause once again at Scout Lookout and observe the climbers overhead.   As I walk on down the trail, I convince myself “I don’t need that,” all the while knowing it is going to haunt me every remaining day that I am in Zion.  😉 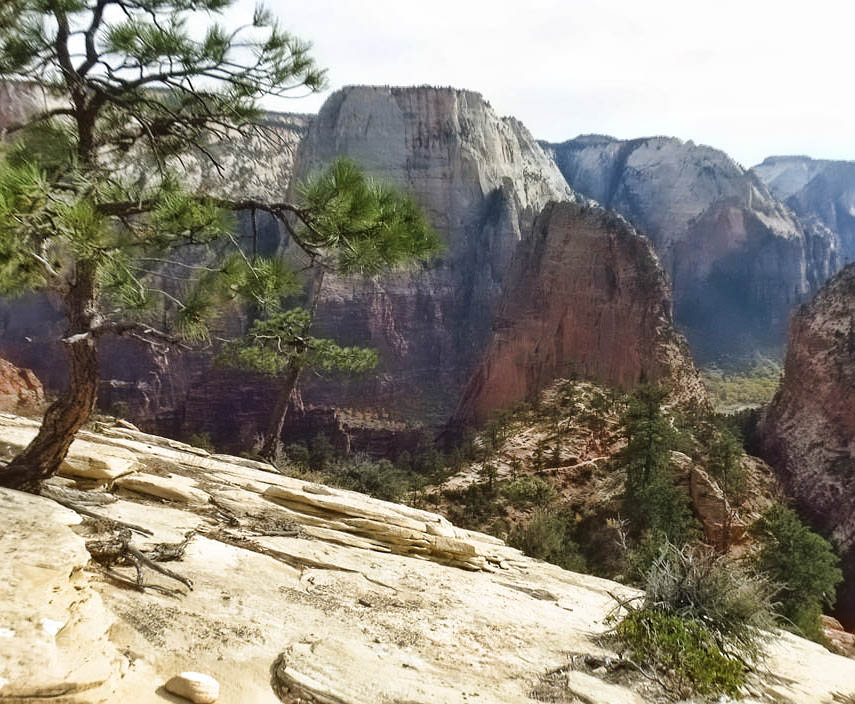 As much as I enjoy hiking solo, you would also think I would enjoy being out front during some of the group hikes.  After all, how does the saying go?  “Unless you are the lead dog, the scenery never changes?”   But instead, I always gravitate toward the rear.  This has not only to do with still struggling to reach the same fitness level as my fellow hikers, but I often times feel leery to step out front and lead because of my lack of confidence in my navigation skills. I have reason enough to doubt myself… END_OF_DOCUMENT_TOKEN_TO_BE_REPLACED

Imagine if you will the high anxiety that surrounds hiking Zion’s Narrows Canyon.  It is one of the most highly sought after hikes in the park, second only to the steeper, higher Angel’s Landing.    One must brave wading through a flowing, 46 degree river of varying depths, maintain balance across bowling-ball-shaped rocks, all while protecting precious cargo like cameras and vital organs. END_OF_DOCUMENT_TOKEN_TO_BE_REPLACED

I have been wondering lately, what is the driving force behind the impulse to explore? Curiosity? Restlessness? Risk Taking? What is behind that urge to leave the creature comforts of a warm rig and comfortable lounge chair to go to such remote places for the sake of exploration? And why do some feel the call, and not others? What prompts that primal urge to push beyond the boundaries for the sake of seeing what is there? Why is finding the end of an unmarked trail as challenging yet satisfying for some as getting the last bit of peanut butter out of the bottom of the jar is for others? END_OF_DOCUMENT_TOKEN_TO_BE_REPLACED